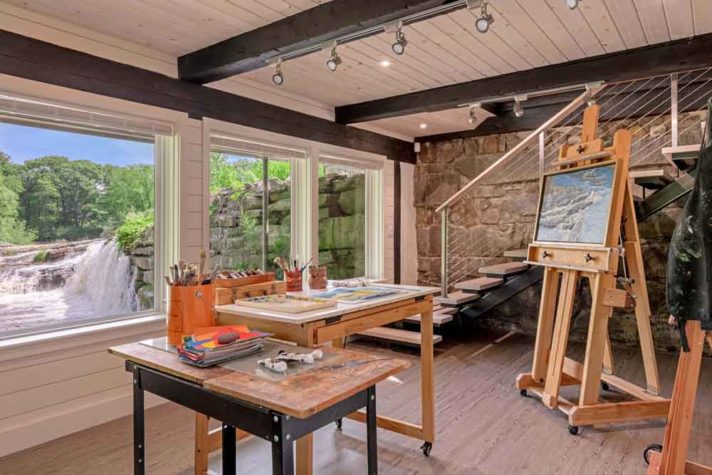 We used to own the house across the street, but when this property became available, we knew we had to buy it—the location is just so beautiful. Gail needed a studio space, and we thought this could be the perfect place for it. Two decades later, when we were ready to downsize, we invited over Albert Putnam, a friend who happens to be a structural engineer, to look at the structure, and we asked him, ‘Are we crazy to renovate and live in this place?’ and he said, ‘No, it has good bones.’ So, based on that, we pulled the trigger.

“The house sits directly in front of a dam on the Royal River, and the dam wall functions as part of the house’s foundation. We worked with Bruce Butler of By Design and told him what we envisioned. He took our ideas and added some of his own; it was really an evolving process. Because of permitting space constraints due to proximity to the river, we went through 28 versions of the floor plan before we got it right. The vision behind the house was that it should fit into the landscape, it should take advantage of the views, and it should let the natural beauty speak for itself. So we oriented the house toward the water and set it into the landscape, keeping it low and similarly colored to the surrounding rocks and trees.

“After finalizing plans, we stripped the structure down to the foundation, only leaving the dam wall, old beams, and the fireplace intact. We built around all of the existing elements, essentially constructing a brand-new building. The location was challenging, though, because there’s always a risk of the river flooding, and groundwater can be an issue. We installed a triple sump pump system and a composite floor on the lower levelas precautionary measures. We also put in a generator to try and avert any power losses. To keep the dam wall as a focal point, we went with an open concept for the staircase and added lighting to the wall. The lower level has become the perfect studio space, giving Gail somewhere to escape to, whether she’s painting or working on her children’s book.”
–Gordy and Gail Clark, homeowners