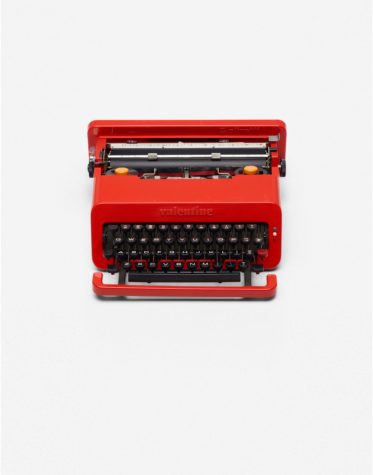 The father of Memphis, the Italian postmodern design movement, Ettore Sottsass designed the Valentine typewriter in 1969. It was introduced on Valentine’s Day and manufactured by the Italian company Olivetti, known for its typewriters and office equipment since the early 1900s. Sottsass declared that this typewriter was “for use in any place except in an office, so not to remind anyone of the monotonous working hours, but rather to keep amateur poets company on quiet Sundays in the country or to provide a highly colored object on a table of a studio apartment.” Unlike the heavy, metal-housed typewriters of the time, Sottsass’s creation was given a bold Pop Art red plastic housing. The Valentine was made to grab and go, with a built-in handle in back and a close-fitting sturdy carrying case of the same material. It has been said that Sottsass’s machine was inspired by Pop artist Tom Wesselman: the orange scroll caps on the Valentine echo the orange nipples and pink breasts of Wesselman’s nudes. The designer’s intent was to make an affordable portable typewriter with no lowercase letters and no bell, made from cheap plastic, but Olivetti objected. Unfortunately, the Valentine never reached a mass audience, despite the great advertising campaign Sottsass conceived that placed the typewriter at various famous sites, such asthe Acropolis. The design did set the bar for fun technology design later seen in Apple’s candy-colored iMacs and the computer produced by One Laptop per Child.