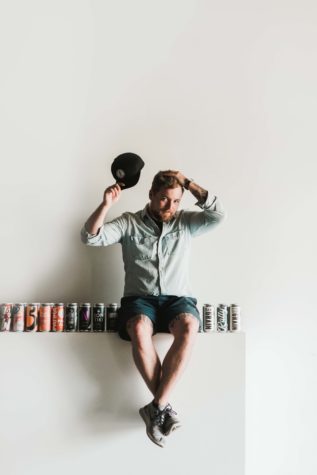 Graphic designer Hugh McCormick hasn’t been in business for long, but he’s already built a strong reputation through his work with numerous local, well-known brands. 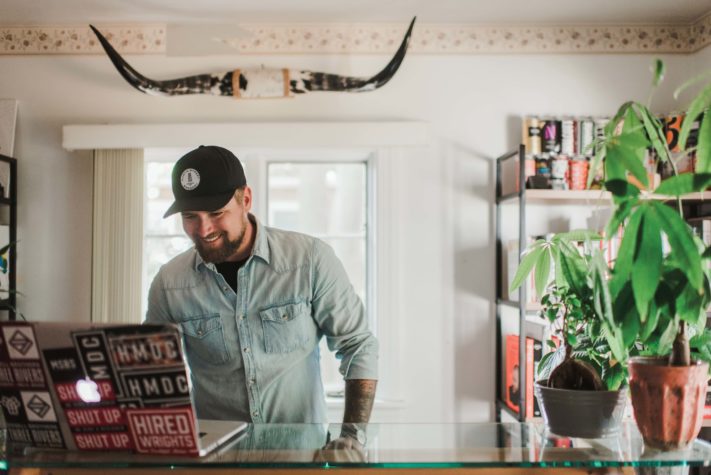 McCormick’s studio is neat and organized. Beer cans donning his designs are lined up on shelves behind him. 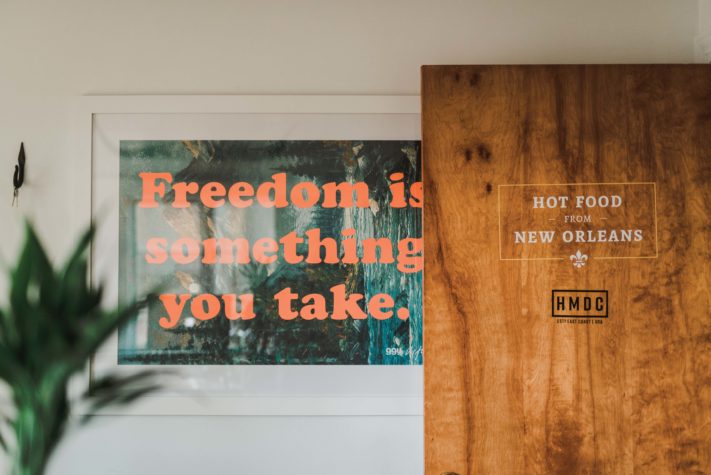 “Freedom is something you take” was created by famed graphic designer James Victore, whose work has been exhibited in the Museum of Modern Art in New York and at the Louvre in Paris. 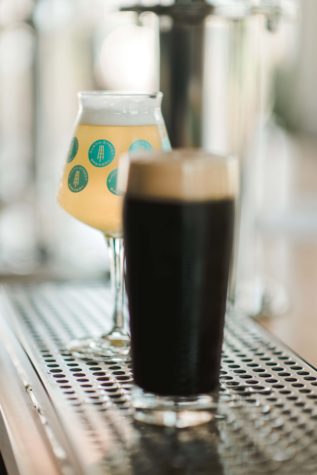 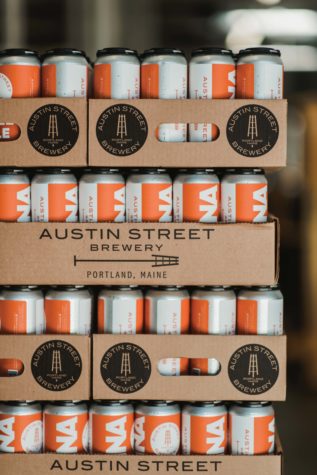 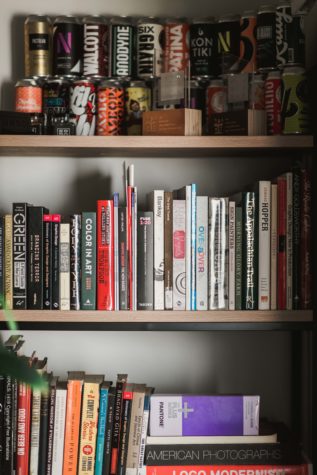 A bookshelf in McCormick’s studio is neatly lined with books, beer cans, and awards for McCormick’s design work. 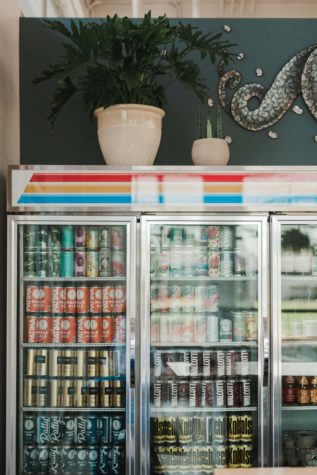 Hugh McCormick’s office on the outskirts of Portland isn’t overly decorated, especially not for a man in his line of work. There are beer cans and bottles in neat rows on the shelves, a few pieces of taxidermy, and one or two framed prints scattered throughout the room. The one that catches my eye shows a mountain rising above a pristine lake, with conical pine trees populating the midground between the shining water and the rocky mountain range. The landscape is sideways, trees pointed not toward the ceiling but toward his desk. Above the rather kitschy and tilted image of American ruggedness is written, in large orange letters, “Freedom is something you take.”

This piece, McCormick explains, is the work of graphic designer James Victore. I’ve heard the name before; Victore is an art-world celebrity whose work has been exhibited at the Museum of Modern Art in New York and is in the permanent collection at the Louvre in Paris. “He’s a big shot,” says McCormick. “I once stayed on his ranch in Texas, and I learned so much from him. His most important thing is: You have your truth. I try to dig that out of every job.” Although he hasn’t been in business for too long, McCormick has already built a strong reputation and seized a level of creative freedom that many would envy. He’s also figured out a way to work according to his own principles, some borrowed from his mentors, some not.

It’s hard to tell exactly what shapes McCormick’s art, but it’s a bit easier to understand the forces that have shaped his career. He graduated from MECA in 2015 and worked a few jobs for local branding agencies before launching his own business in 2017. Lately he’s been branching into video content and working with athletic brands. (He’s a huge fan of Lululemon and finds yoga “centering.” He says, “I wish someone had told me about yoga 20 years ago!”) Many of McCormick’s first projects were for medical dispensaries and microbreweries, including the much-lauded Austin Street Brewery in Portland. “I started working with Jake [Austin] and Will [Fisher] when it was just those two bros,” he says. “Before they had any employees, it was me and them and their beer. They’re my dream clients—they’re sharp and empathic, and they really know their stuff.” He created their entire brand from scratch, including their clean, mint green logo, their typography-heavy bottles and cans, their apparel, and all their advertising materials. “I still go to Austin Street almost every day,” he says. “They’re like family now.”

McCormick gets much of his work through word of mouth, and after working with Austin Street it was only natural to begin helping other like-minded businesses hone their visions, too. He designs for both Bissell Brothers Brewing Company and Yes Brewing Company, and works frequently with food trucks, including the Hungry Collective, Mr. Tuna Mobile Sushi Bar, and Mami Food Truck and Restaurant. More than once, these clients have asked McCormick to create an original piece of art on their walls, which means you can see his murals in the dining room at Mami, the tasting room at Yes Brewing, and in the new Bissell Brothers Three Rivers tasting room in Milo. “Murals are great because the inspiration can be so instantaneous,” he says. “But they also bring me close to people because I have to be there a long time.” He adds that painting murals can feel like “a release.” “I love putting my mark places, and I love to work with my hands to make something tangible.”

Although McCormick has an eclectic-yet-professional office on Auburn Street in Portland, he does much of his mental work outside and on the go. “James Victore says the studio isn’t where the ideas are made—it’s where you tape shit together,” he says. “I don’t come in and sit at my desk and think. It’s all about going out and doing things.” This tracks with what I’ve learned of McCormick through our conversation. He’s a high-energy guy with a rambling yet blunt conversational style and a tendency to loop seemingly unconnected ideas together mid-sentence. It’s a little electrifying—he strikes me as someone who never stops coming up with new ideas or trying new things. He admits that, as a designer, he tends to take the “shotgun approach,” designing multiple options for one product. “My work is, basically, a lot of puking out a ton of stuff and then seeing what I gravitate toward,” he says. “I produce a lot, and then I narrow it all down.”

Not all designers work this way; his girlfriend, who also works in graphic design, “chisels each piece out of stone,” says McCormick. But being “an incredibly fast designer” is “kind of my shtick,” he says. Bluntness is also part of his shtick—or perhaps I should say honesty. He’s dedicated to truth telling and committed to creating good design, even when sometimes that means pushing a client out of their comfort zone. “The biggest thing I butt heads with clients over is when they hand me someone else’s product and say, ‘I want mine to look like this,’” he says. “Something I think a lot about is giving truth over expectation. I could make you look like everyone else, and that will probably get you sales. But I want you to look like you.” In order to figure out what that is, McCormick likes to spend time with each client talking about their values and mission, their goals, and their product. He tries to figure out each client’s archetype, a concept that he originally learned from local designer David Puelle.

“An archetype is your character,” he explains. “You can see this in movies, like in Star Wars—there’s a good guy, a best friend, a villain, and so on.” This idea is based in Jungian philosophy, which argues that people share a collective unconscious organized according to certain principles. People can be tricksters or heroes, wise men or children, mothers or devils. For McCormick, it’s helpful to figure out someone’s archetype before beginning to visually articulate their aesthetic. Some clients are caregivers, others are jesters, and still others are rebels. When I ask what his archetype is, McCormick pauses for a second. He slows down to answer, a rarity, but then he cracks a smile. “Probably the best friend,” he says, and I believe it. 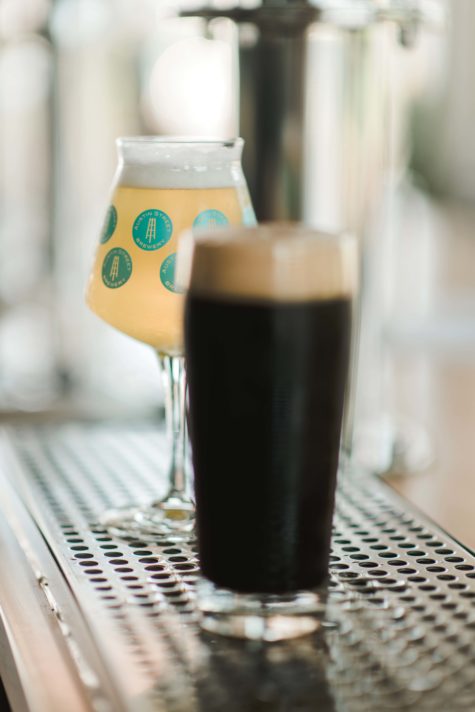 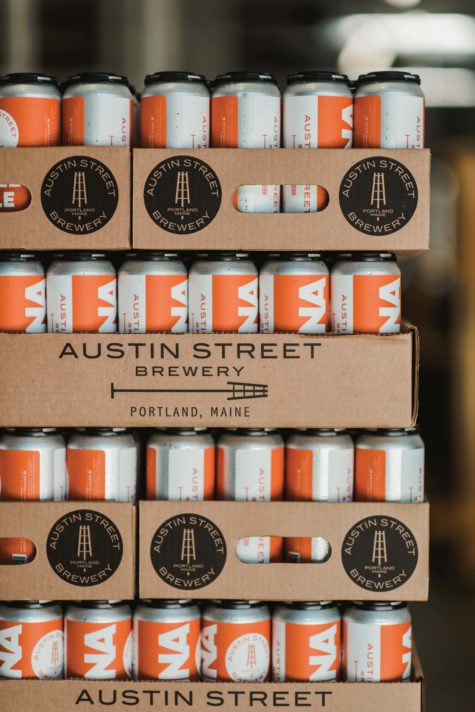