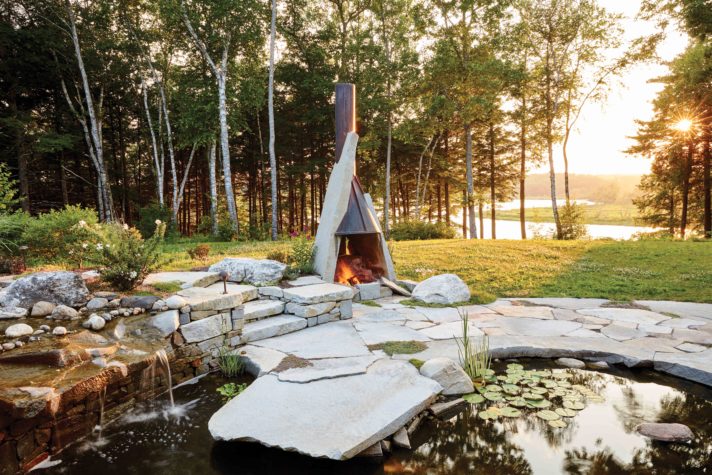 “Initially the owners approached me with a loose concept of their vision for the space along with a list of desired features. In response, I drafted an experiential proposal, in which you would get glimpses of the featured elements, which guide the eye to always discover something new without revealing the entire space at once. The fireplace was to be a focal point for the main patio, to be enjoyed from a number of different vantage points. After playing with a few other options, like a stucco fireplace or a simple fire pit, I had the idea to try something really unique. Taking my cue from the large granite slabs that shape the edge of the nearby pond, I sketched a design with three large stone slabs leaning against one another, forming the fireplace as a vertical expression of the same material-language used in the patio on a horizontal level. It was almost as if some tectonic force had pushed the patio slabs into an upright position, evolving the concept into a space that’s somewhere between a traditional fireplace and an open fire pit. As we began to build the fireplace, the materials started to dictate how it would actually look. It was very much a hands-on approach, similar to that of an artist working on a canvas, looking at their art and deciding ‘I need more blue here’ or ‘I need more red there’ as they go along. It was very fluid, and you can’t often predict how everything will come together just by sketching it out; the design continuously changes shape as you go along. We also weren’t able to see how all of the materials worked together until we had them all on-site and we started to build and experiment. With the fireplace in mind, we selected the granite slabs at a quarry in Washington, Maine. Once we had a chance to place the slabs on the property, we needed to figure out how to funnel the smoke and create a draft. Using more stone would’ve diminished the effect of the granite slabs, so I suggested the use of copper as a contrast to the natural granite. To create the hood, we fabricated an armature of rebar, drilled and anchored into the slabs, and then applied several layers of reinforced cement-based stucco from both sides. Everything was then wrapped in copper sheets connected with standing-seam locks.”  —Sebastian Jerosch of Sebastian Jerosch Masonry Repair and Design