Evolution of an Architect 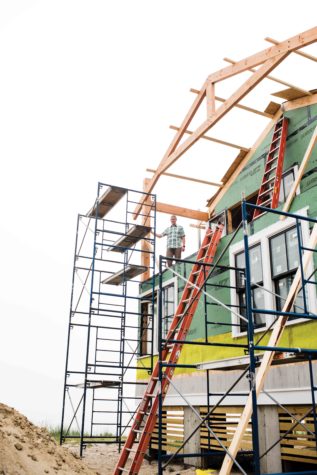 In order to meet flood regulations, Browne had to raise the Ferry Beach house onto piers. “The new house will feature a wall of glass along basically the entire ocean side,” he says. “The house also has a view of the marsh on the other side, so it’s a great, private location.” 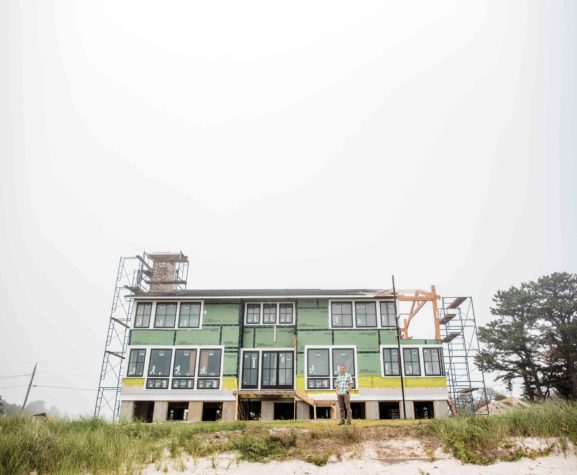 The team at Kevin Browne Architecture has been working on this project on Ferry Beach in Scarborough for months. “It’s pretty much on the beach, and we had to jump through quite a few hoops to meet the town and state regulations,” he says. Fortunately, Browne is up to the challenge.

Kevin Browne has a good sense of humor, but he may not have the best sense of timing. He started his eponymous architecture firm in 2008; it was, he remembers, “the worst possible time to start a business like this.” The financial crisis had already begun, and Browne knew clients were anxious about building new homes. And yet he ventured out on his own anyway because, as he explains, “I just wanted to do my own thing.”

The first office for Kevin Browne Architecture was located in the basement of his Falmouth house. “It was scary,” he remembers, “and it was exhilarating.” For a couple of years, he worked as a subcontractor for his former employers at Knickerbocker Group, filling in on their projects to help subsidize his own small business. But clients kept coming, and slowly his business grew, adding first a designer and then a few more like-minded designers shortly after. Now, Kevin Browne Architecture has three designers, an office manager, and an intern, and they operate out of a sunny office space on Route 1 in Falmouth. It didn’t take Browne long to realize that the basement was a dark, cold place to work. This space suits him much better.

Browne is also suited to being his own boss. He enjoys the freedom of working with residential clients to create houses that feel contemporary and fresh yet still speak to the Maine landscape. Nature has always been important to him—it was the mountains and the coastline that brought him to Maine, and it’s the mountain-biking trails and slow pace of life that keep him here. “I’m an outdoorsperson,” the Pennsylvania native explains. “Here, we have nature right out our back door. It makes the quality of life better and relieves stress after a long day. I just went biking this morning, and I know I have a busy day ahead of me, but it feels so good to start the day like this—refreshed.”

The hours Browne spends cycling over rocks and roots may not be immediately apparent in his designs, but looking at the houses he’s worked on, you do get a sense that the person behind them must appreciate the wild woods of Maine. There’s a clarity inherent in his designs; these are not fussy and overworked structures. I wouldn’t necessarily call his residential work simple or minimalist, though it can be that at times. It’s more that Browne is able to convey both a sensitivity to place and a feeling of newness simultaneously—he balances the old and the new, the traditional and the contemporary, the need for light and the equally important desire for privacy.

Take, for example, a modern farmhouse he designed in Falmouth. “They were looking for traditional forms, but also wanted to have a slightly more contemporary feel,” he says. He combined the lines and angles of a New England farmhouse with of-the-moment detailing, like square windows and minimalist trim. “Everything is downplayed, from the trim to the siding, and it comes across very simple,” he says. It was one of the first big projects he completed as Kevin Browne Architecture, and it was a bit of a departure from his earlier work. When Browne first started working in the state, he says, everyone wanted shingle-style houses with curved rooflines and small, charming detailing. While both shingle-style houses and the modern farmhouse remain popular in Maine, trends have shifted, according to Browne. “Now, it’s all about midcentury modern,” he explains.

This doesn’t bother Browne. He’s a flexible designer, and he’s sensitive to the shifting landscape of contemporary design. His own tastes have changed over the years. “As you grow, your creative ideas change,” he says. Browne has been drawing and drafting since he was a teenager, which means he’s had plenty of time to both refine his personal palette and come to grips with the fact that aesthetics do (and should) continually evolve. In his very first drafting course, a rigorous class that was “all green pencil and hard-stock paper,” Browne was given the task of designing his dream home. “It looked exactly like the house I was living in with my parents,” he says with a laugh. “That was what I knew at the time, and it was what I liked best. But as time goes on, that changes.”

These days, Browne is particularly excited about his latest project. It’s a private residence in Freeport, and it’s unlike anything he’s ever done before. “It’s on a challenging lot,” he explains. No one had built on this oceanfront property before, partially because it had so many setbacks and regulations. “The property is split by a stream that runs down the middle, and the actual buildable area is very tiny,” he says. But the client wanted a four-bedroom house, so Browne set to work designing a cantilevered contemporary house linked to the driveway by a bridge that spans the river. As you drive over the bridge and approach the main house, he says, you see the “floating cable form of the cantilever.” He adds, “We’re lucky—we’ve got a client who wants to be on the cover of a magazine. And we can help him with that.”

This challenging house is taking up much of his brain space, but Browne likes that. If he needs to clear his mind, he escapes into the woods for a few hours. “I like the variety of projects we get to work on,” he says. “When we design a house, we can do it traditional or much more contemporary, and that makes my job more interesting.” An ever-changing job is also ever inspiring, particularly for a man who enjoys hard work. “Architecture is fun because you’re doing something different every day,” he says. “I like to think outside the box.” 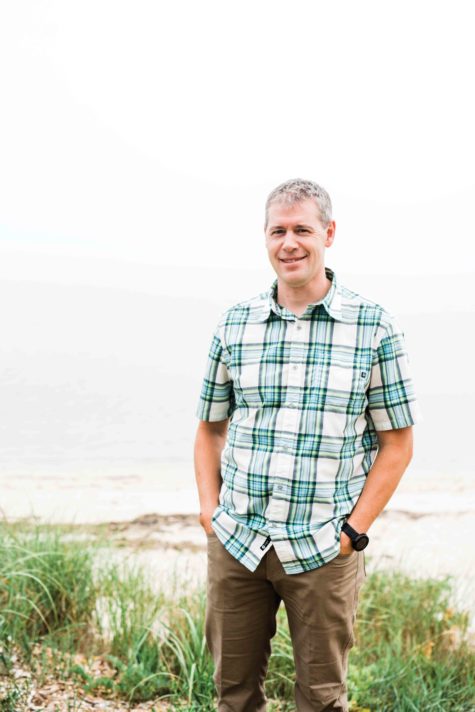 When he’s not working, Browne likes to unwind by mountain biking or fat-tire biking around southern Maine. 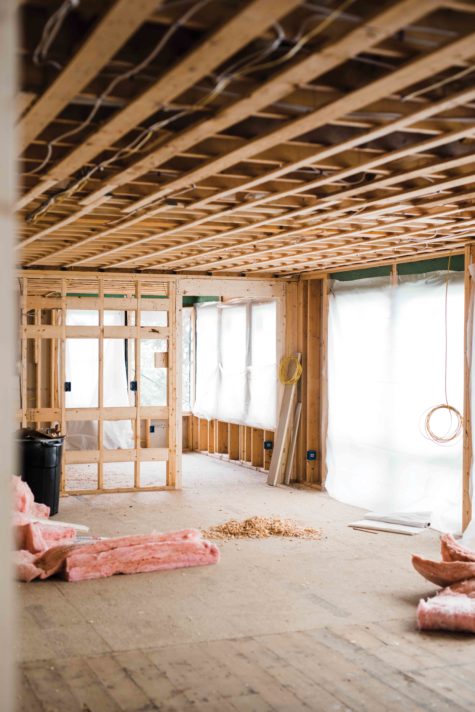