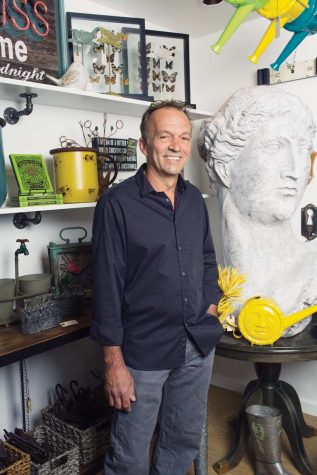 Philip Pascarella stands next to a four-foot fiberglass bust, one of many pieces that play with scale in his Northport shop. 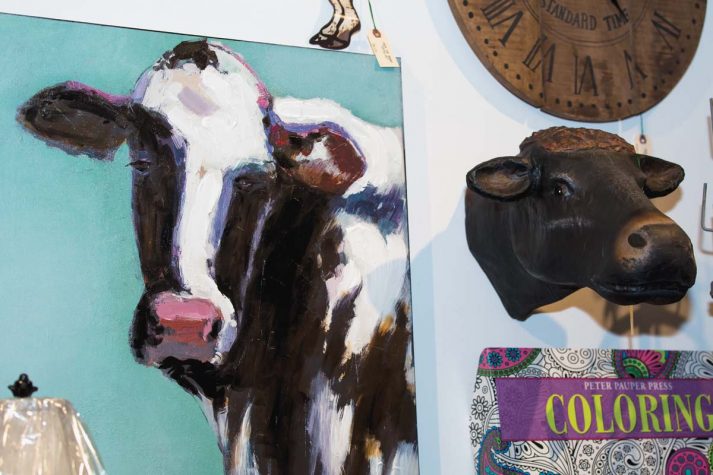 A canvas depicts Molly the cow. 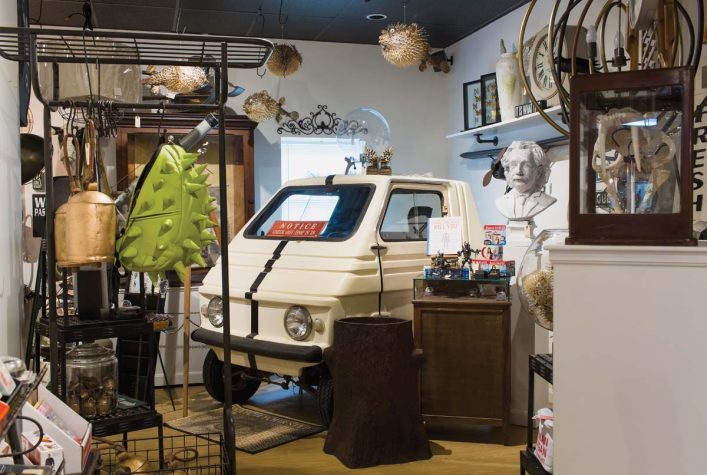 Parked next to a fiberglass bust of Albert Einstein is a 1975 Zagato electric car from Milan, Italy. 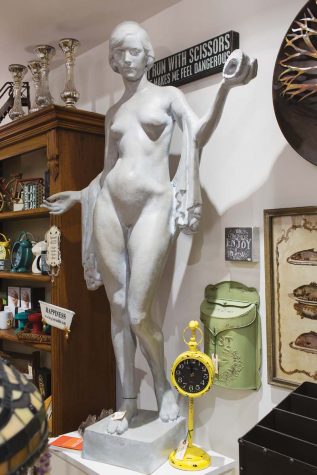 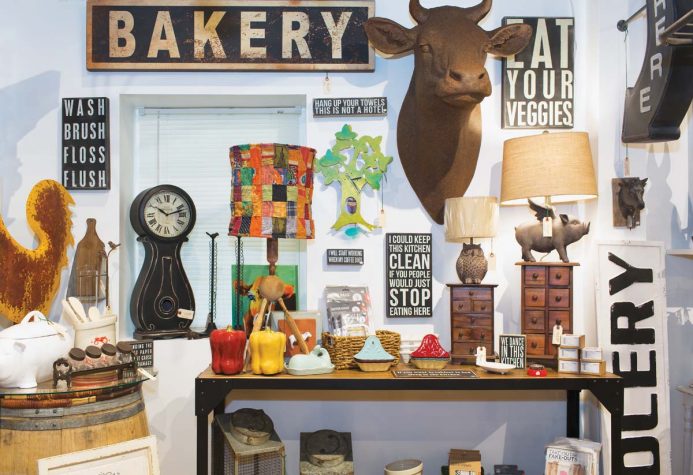 A three-footfall fiberglass heifer is mounted among admonishments and whimsical lamps. 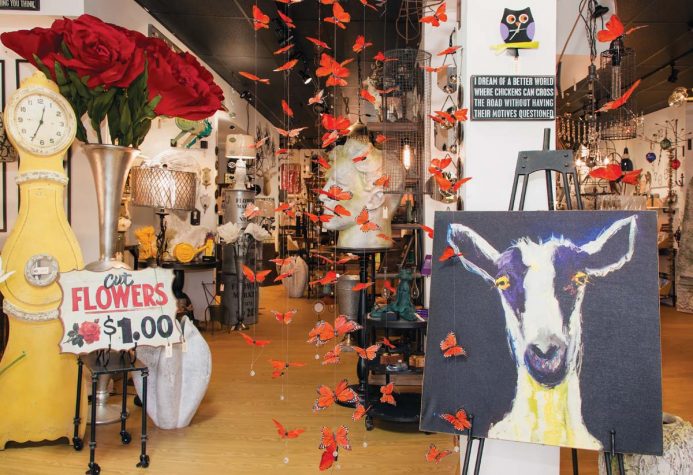 At the store’s entrance, strands of feather butterflies dangle near one of Pascarella’s favorite pieces: a goat print edged with burlap. 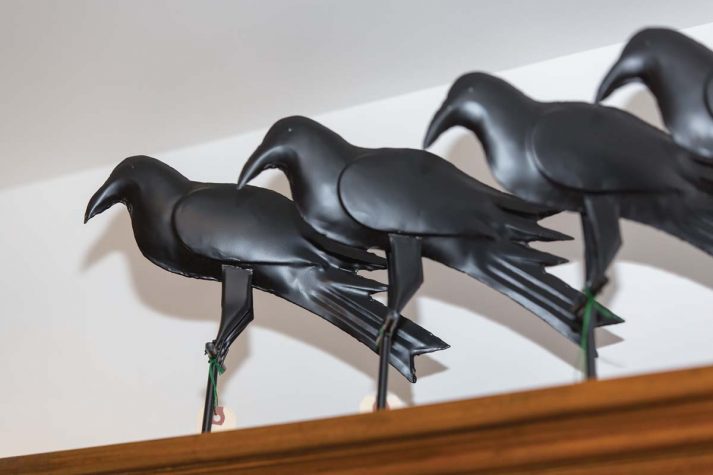 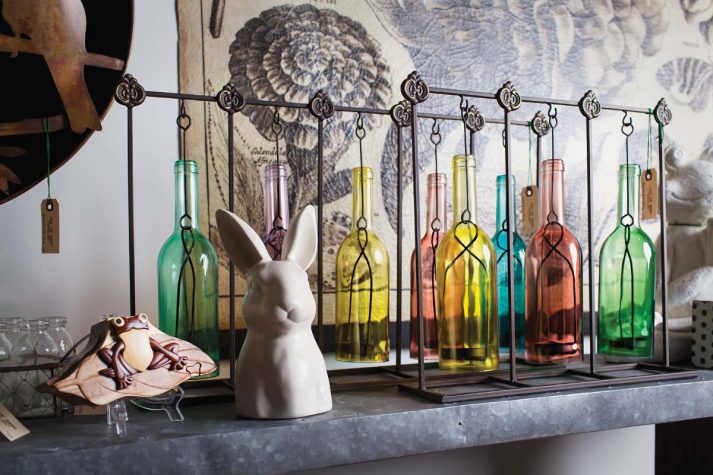 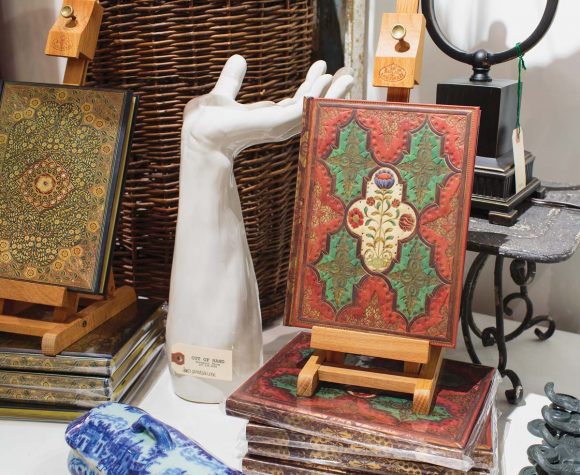 A hand shaped porcelian candleholder—placed next to colorful leather journals—pays homage to the store’s name. 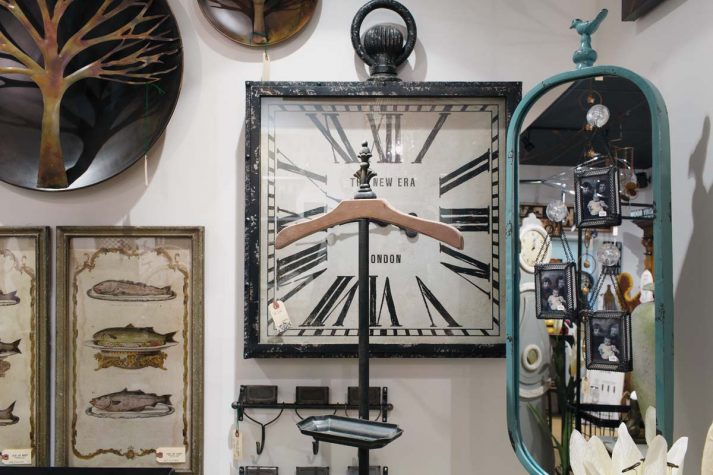 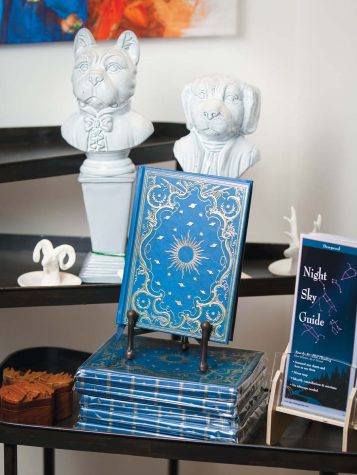 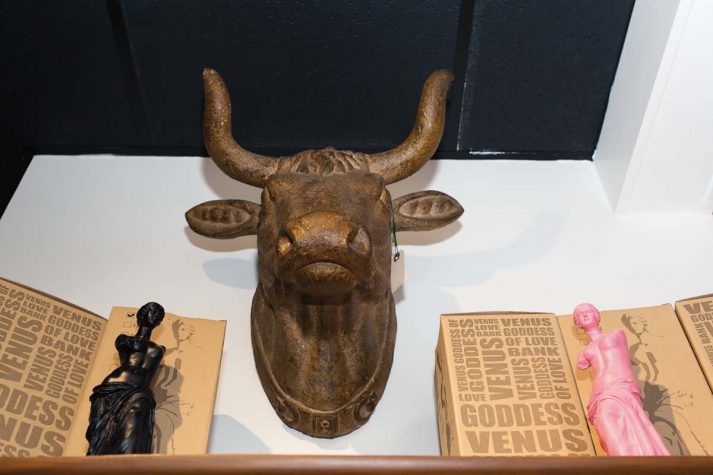 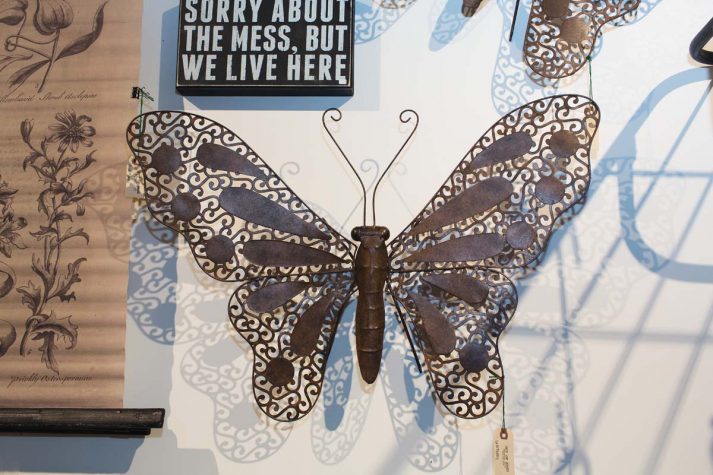 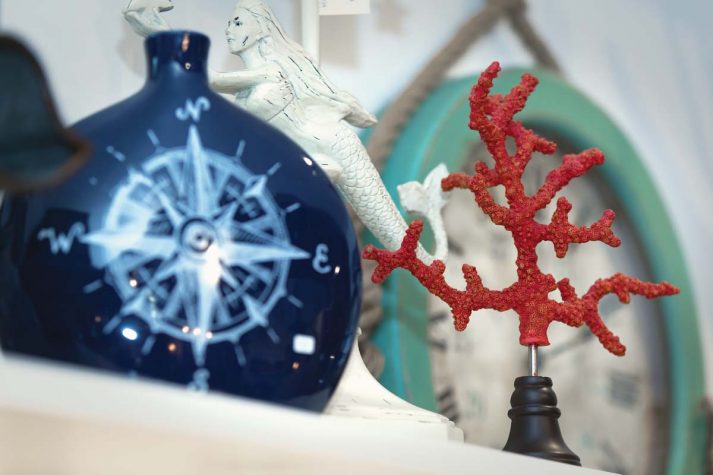 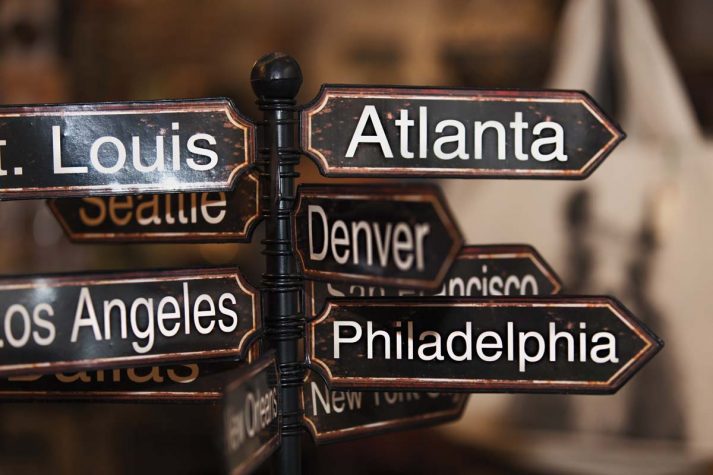 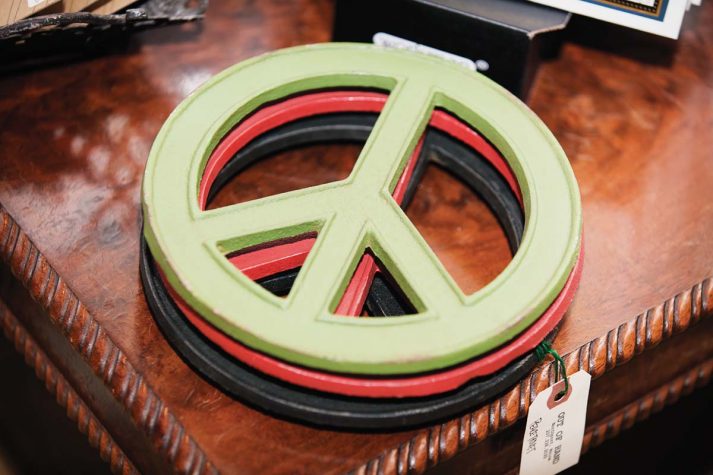 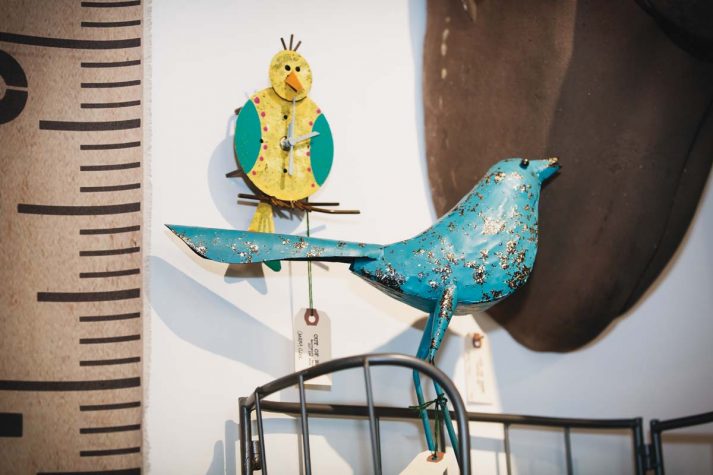 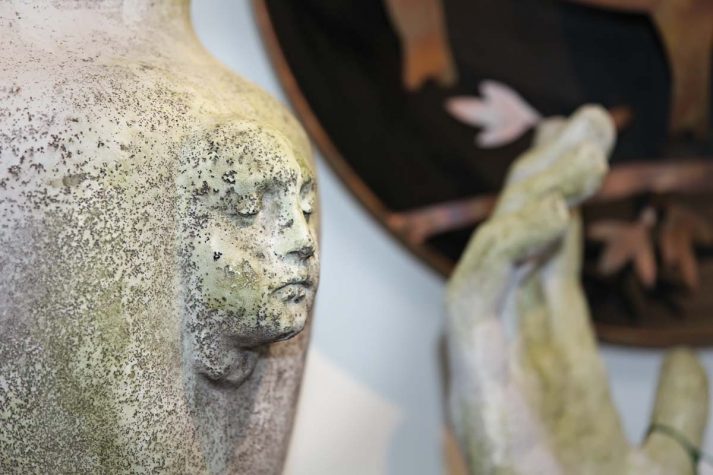 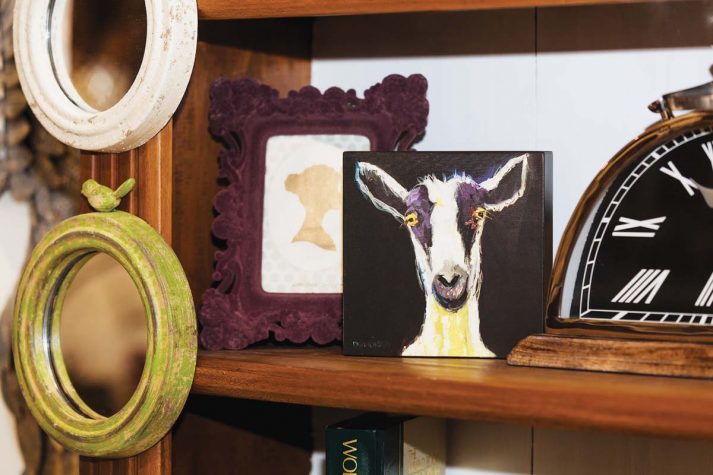 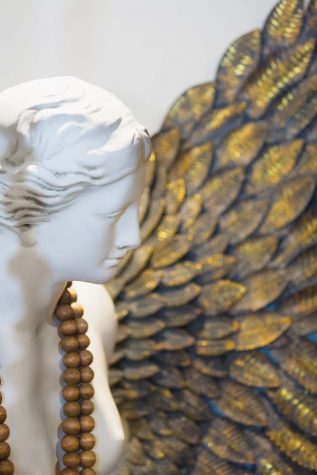 At Out of Hand in Northport, owner Philip Pascarella curates finds both classic and quirky

On a quiet stretch of road that hugs that coastline between Camden and Belfast is an ordinary corrugated metal building, the kind typically used as a warehouse or for storage. Except here, the entrance is marked by a six-foot-tall gold sculpture in the shape of an open hand—complete with nail beds and palm lines. Pull in and park out front, and you’ll see ornate metal dragonflies festooning the façade. Under a covered porch are bright yellow Louis XV– style outdoor chairs and lime spray-painted trees that look like they sprang from a Dr. Seuss book.

“I have a friend who says that it’s more like an art installation than a store,” says owner Philip Pascarella as he opens the door for a visitor while simultaneously hoisting a four-foot-long paper flower over his shoulder, fireman style. Out of Hand, his Northport home-design and gift shop, is filled with thousands of visual curiosities ranging in price from $1 to $2,500 (all of which Pascarella rings up on an 1880s cash register). Among them: an ornate birdcage- style pendant lamp that hangs from the ceiling, a three-foot-long bleached white lobster in a glass display case, and a 1975 Italian Zagato electric car. (“It keeps the guys busy,” he says of the men who come in with their wives.) There’s even a baby grand piano for customers who know how to play or for kids taking lessons.

Pascarella opened the seasonal shop in the spring of last year, having previously run another pair of home stores in Calais and Perry for 15 years. Out of Hand is his fifth retail venture; he launched his first business when he was 23 and newly graduated from the Art Institute of Chicago. He refers to the shop as his “life,” and indeed, he lives just upstairs, in a modern loft apartment he renovated himself. When artistic inspiration strikes, he simply rolls out of bed and gets to work. “I’ll wake up at one in the morning and think, ‘I need to redo that case,’” he says.

The displays are continually evolving, and Pascarella completely overhauls the shop once a year. He’s finishing up the latter the day this reporter visits. A UPS truck pulls up to the door with a delivery of back orders placed during the off-season. “It’s like Christmas,” he says, cutting open a cardboard box and scattering packing peanuts to the ground. He unearths a desktop-size porcelain sculpture of a hand—this one even has veins—a camp-inspired table lamp with canvas “tent” flaps that roll up and down (“I think I have to keep one of these personally,” he says) and a small iPhone speaker shaped like a Victrola. “See now, where have you seen one of those at?” he asks. “That’s what I do. Try to find stuff that’s fun and that no one has ever seen.”

Peering over his shoulder from the wall behind him is a taxidermy lion, purchased at Perry’s Nut House in Belfast when former owners held a liquidation auction. “People think the store is out of hand now? Just wait,” he says, continuing to unpack boxes. “It’s only going to get better.”

Philip Pascarella on punching up your decor 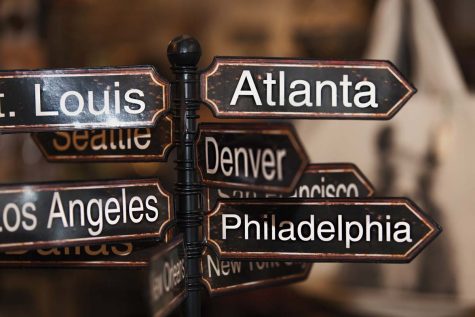 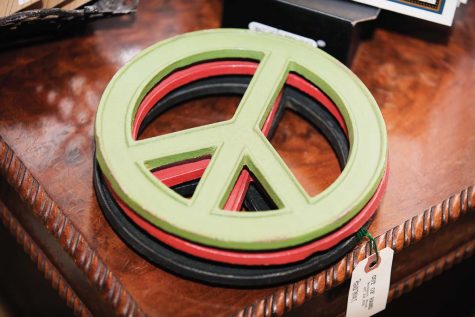 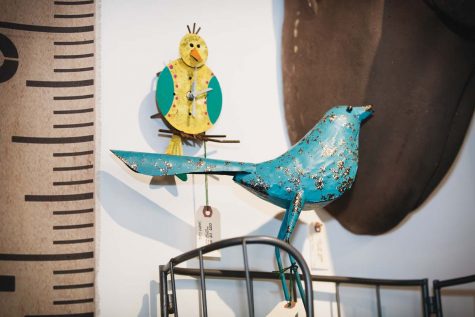 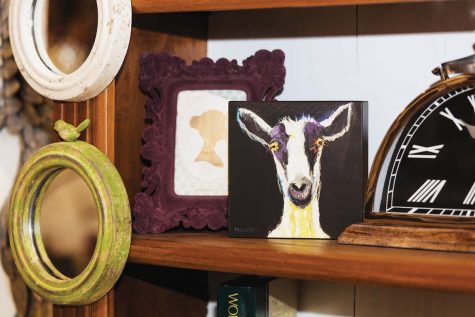