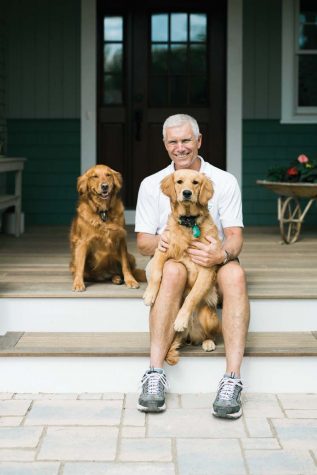 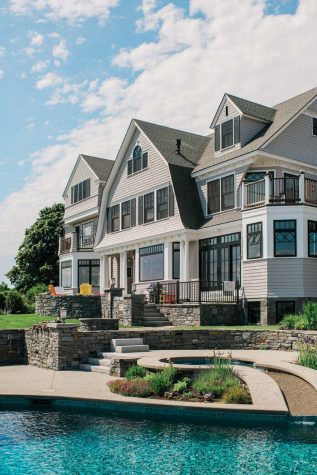 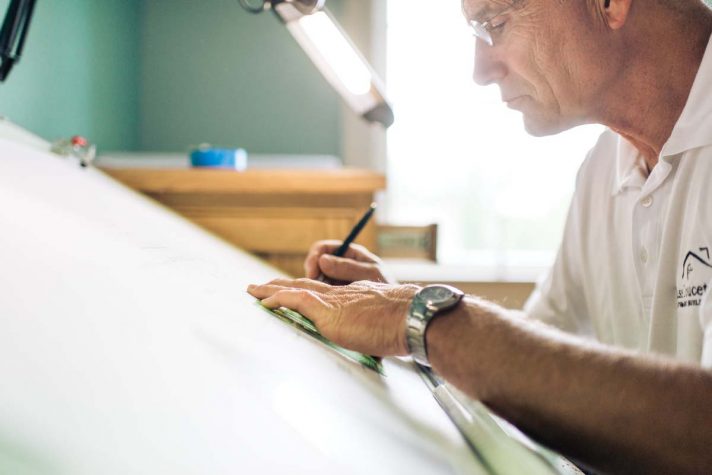 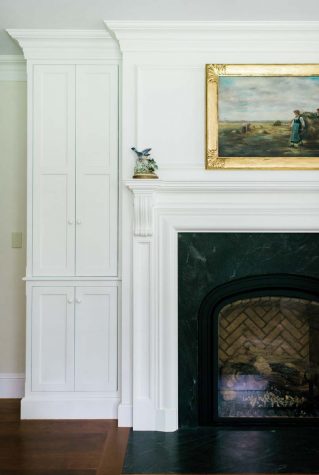 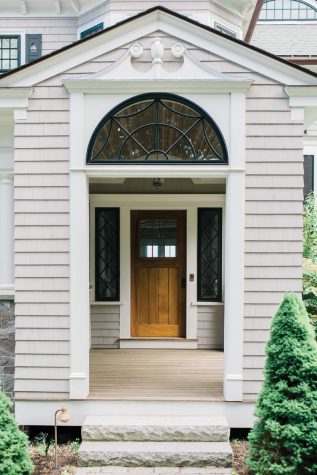 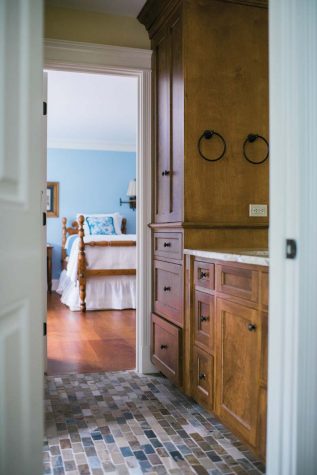 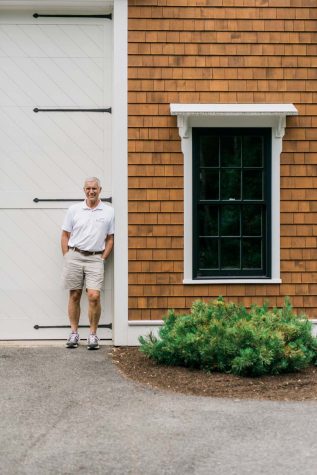 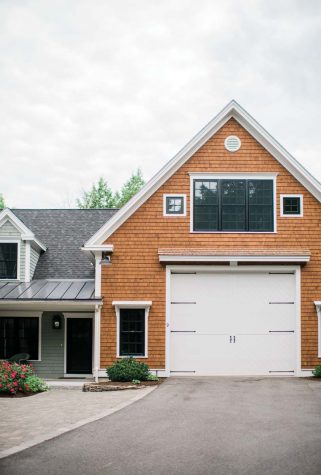 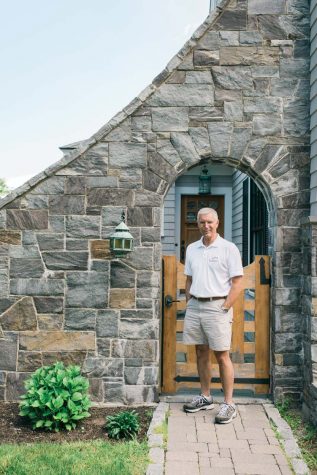 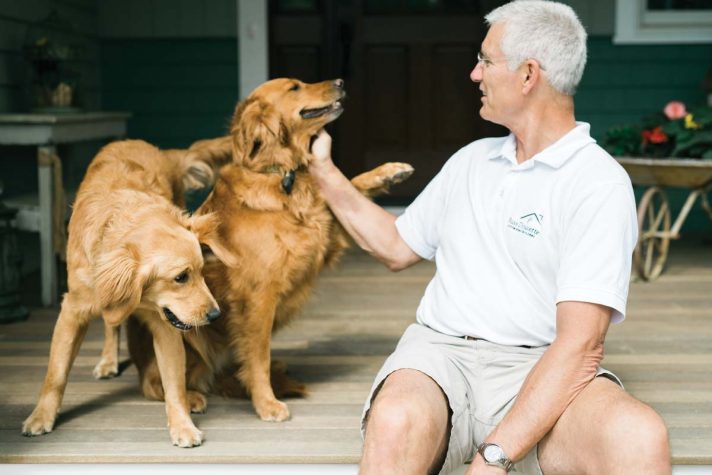 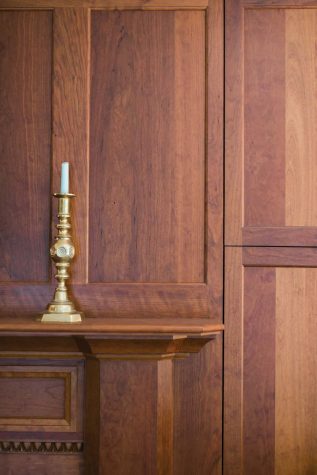 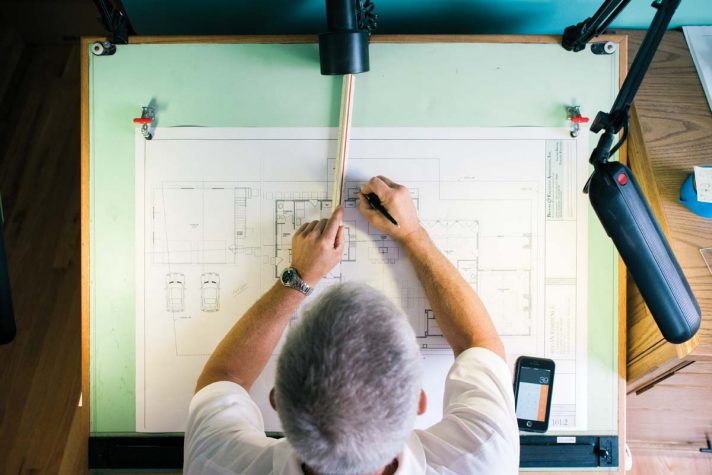 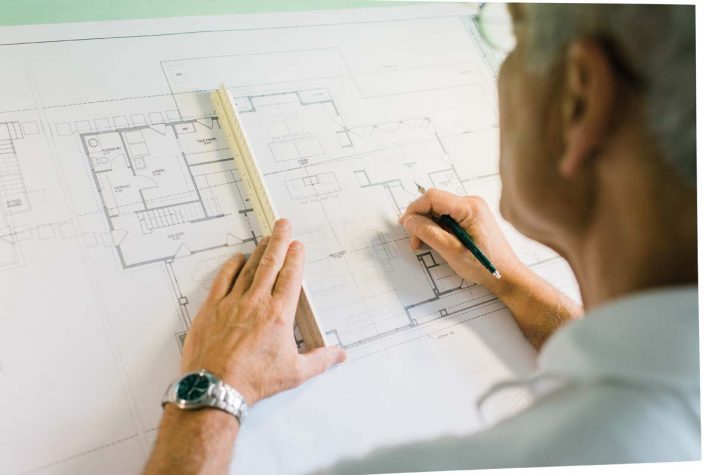 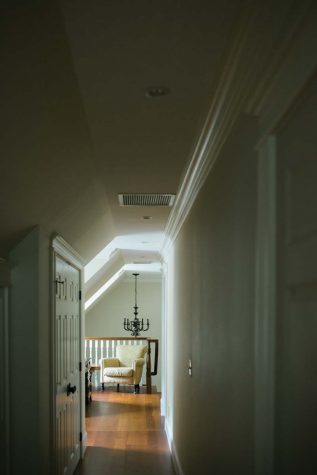 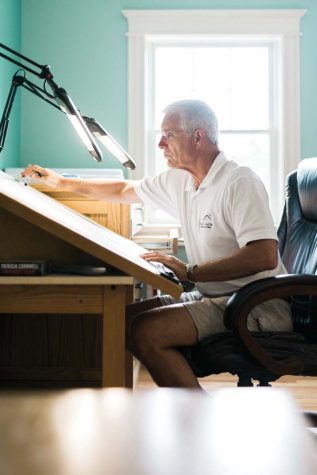 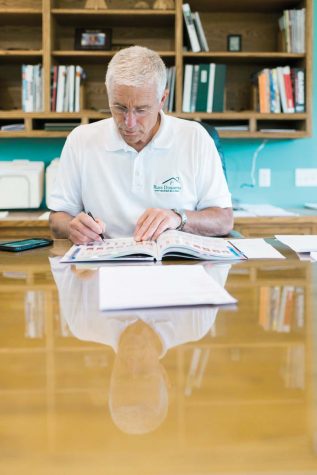 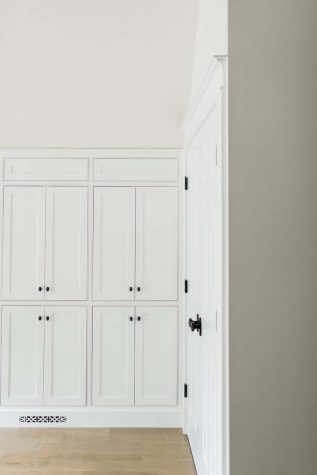 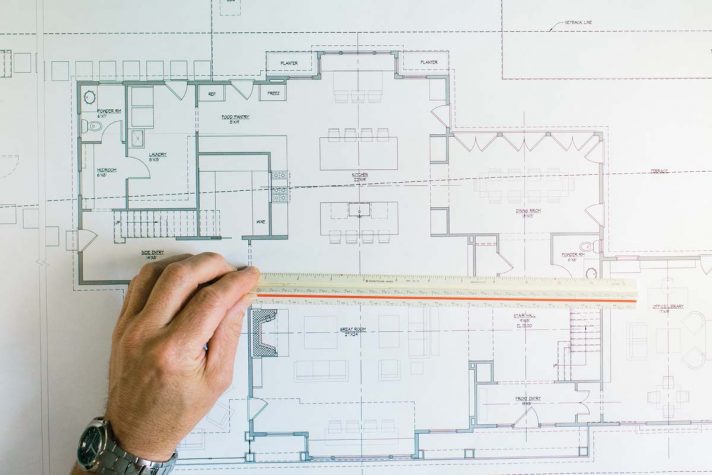 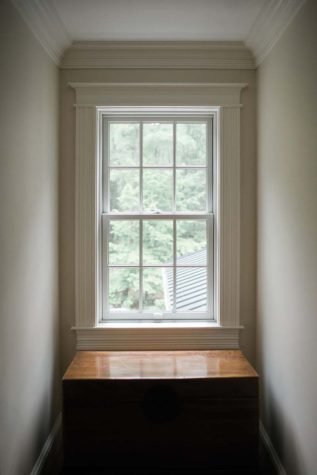 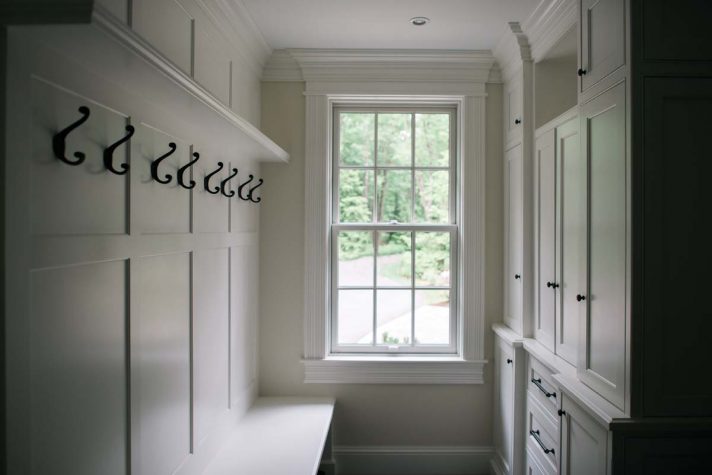 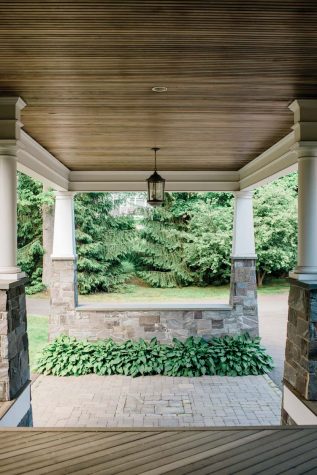 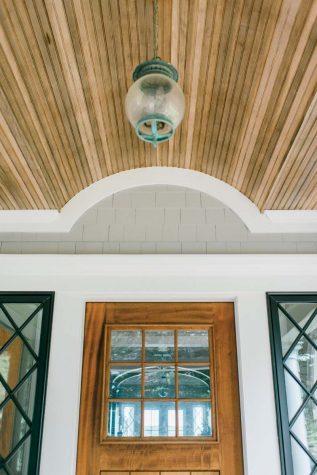 For nearly 40 years, Russ Doucette has built homes- on his business -on a foundation of craftsmanship and customer service

Houses built by Russ Doucette stand out, but not because of trendy architecture or an immediately identifiable style. Often grand and always beautiful, they are defined by exceptional craftsmanship and by the remarkable service the Scarborough-based contractor provides to his clients. A Doucette home, and the man who built it, is as solid as Maine granite and as reliable as the tides.

Tall and athletic, with a wide, easy smile and bright blue eyes framed by silver-rimmed glasses, Doucette soft-pedals his high standards as simply good business. “We have a decent reputation for trying to give clients what they want and backing up what we do,” he says, sitting in his light-filled home office, where the substantial, creamy white window trim offers evidence of his fine work. Asked about an anecdote on his website, he replies, “Yes, I’ve gone to fix things on Christmas Eve or Christmas Day or whatever. But that’s just good customer service. People have a need, and you do it.”

That Christmas fix was in 2001 when, two weeks after Caryn and Paul Flanigan moved into their new Yarmouth home, there was a leak. Caryn called Doucette, who showed up on their doorstep a short time after, tools in hand. Seven years later, during an August downpour that closed several roads, their basement flooded; an outlying drainpipe the Flanigans were unaware they needed to keep clear had clogged. No local plumber would come. “It was our fault,” says Caryn. “But Russ was there in a matter of an hour. He called his plumber and said ‘Get here now’; it was fixed in 30 minutes.”

The Flanigans were so impressed with their first home that they hired Doucette to build them another one in 2011. This past January, he returned to the second house for a major remodeling. “There was no question of whom we were going to use,” says Caryn, noting that finish carpenters Ed Tirabassi and Brian Brooks, who have worked with Doucette for more than 15 years, were on-site for all three jobs. “We asked them to do some pretty difficult stuff,” like mounting a large, old beam in the ceiling of the barn. “They’re always happy to do it, and the precision of their work is phenomenal.”

Doucette’s deeply engrained work ethic and humble outlook have their roots in the rocky soil of Aroostook County, where was “the baby” of a family of seven in the small town of Van Buren. His father was an “old school” carpenter who grumbled about his youngest son’s passion for sports, pushing him to get a job. “I eventually convinced him I had my whole life to work, but I could only play sports while I was young,” says Doucette, who managed to earn a little pocket money at his grandfather’s restaurant. “On Friday and Saturday nights I’d put a chair in front and shine shoes for a quarter,” he says, smiling at the memory. And, like other Aroostook County kids, Doucette and his siblings had a three-week hiatus from school in mid-September to harvest potatoes. “That was how we earned money for our winter clothes,” he says.

He went on to study construction at Northern Maine Vocational Technical Institute in Presque Isle (now Northern Maine Community College). Afterward, one of Doucette’s two sisters convinced him to move to Portland, and he landed a job building condos at a Freeport firm. He became a framing and finish subcontractor for the company, eventually launching his own business in 1980. Today, Russ Doucette Homes employs a full-time staff of six, and usually has six construction projects going at a time. “I have always been hands-on. We’re so busy now I have to run a job or two, but quite frankly, I don’t do it as well as Tim,” Doucette says with characteristic humility.

That’s Tim Fecteau, a former commercial contractor who has been Doucette’s foreman since 2001. “We complement each other,” says Fecteau. “We both expect quality, but I’m a little more organized.” Doucette credits Fecteau with introducing him to snowmobiling, a sport that brings him back to Aroostook County, where three of his siblings and his 95-year-old father still live in Van Buren. When he’s not on a snowmobile, “I always seem to make time to drive around to relive my childhood memories. It’s a part of my life I don’t ever want to lose.”

Through his well-built homes, Doucette has brought his northern-born integrity, sincerity, and pride to neighborhoods in southern Maine. Each house is customized, but most borrow from the classic New England shingle or farmhouse style and include at least some of his signature details: eyebrow or porthole windows, dormers, arched garage doors, finely crafted millwork, and subtle designs in the shingle siding.

One notable exception: Claude Sheer’s thoroughly contemporary oceanfront home on Pine Point. “The design of our house is not one that Russ is known for,” says Sheer. “That meant we had to trust that they were not just great builders but that they were not going to lead us astray in any way.” Doucette and his team had never built a two-story glass wall facing the ocean, but they not only built it, Doucette designed it too.

“He will build for anybody and will give you an honest price,” says Janet Barrett, Doucette’s office manager, who banters with her boss like a favorite sibling. “I like his forthrightness. We can say absolutely anything to each other,” she says. “And I love the way he treats people like they’re friends.”

At 61, Doucette says he “hopes to keep going” building homes for another nine years. For now, any downtime is spent at home with his wife, Katie, and their two golden retrievers, Bella and Breeze, or riding his touring motorcycle or boating on Maine’s lakes. “I don’t really have a passion for one thing. I enjoy lots of things,” he says, with typical restraint.

Doucette’s many happy clients would argue that he has a passion for following a couple of old adages: “a job worth doing is worth doing well” and the Golden Rule. 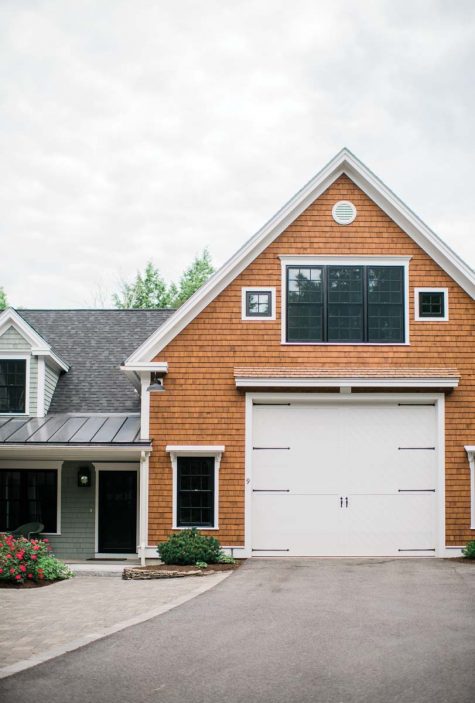 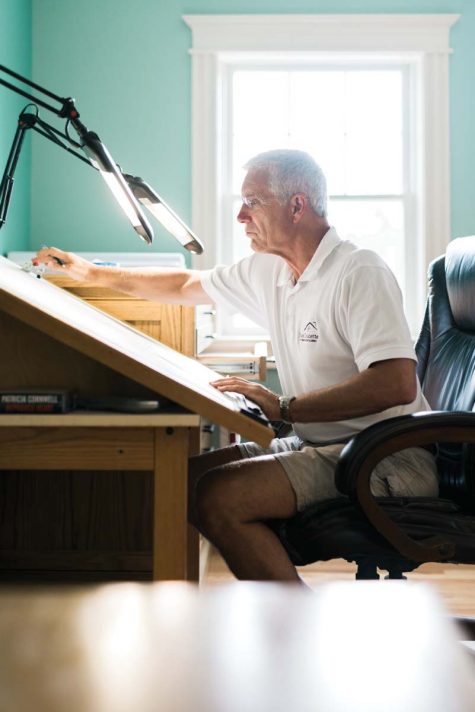 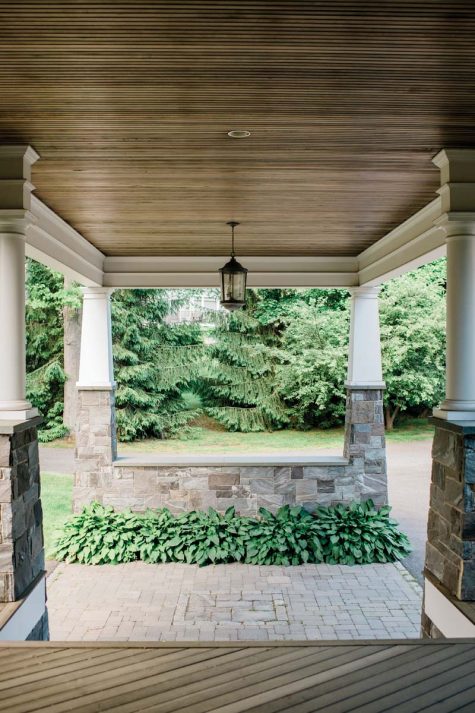