Inside a Small Northeast Harbor Shop with Big Personality 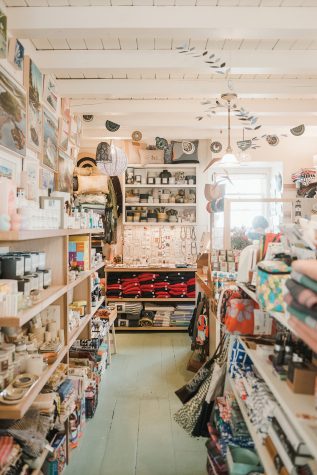 Judd-McGee and her staff have found ingenious ways to fit a lot of good things into their small space , including open shelves, a custom-built jewelry display case, and artworks hung all the way up to the ceiling. 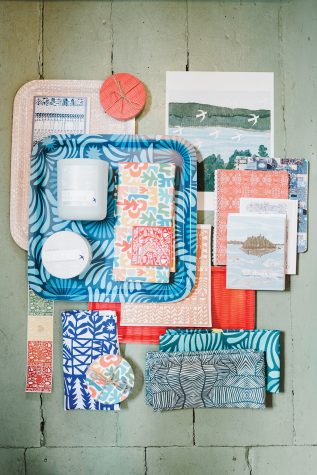 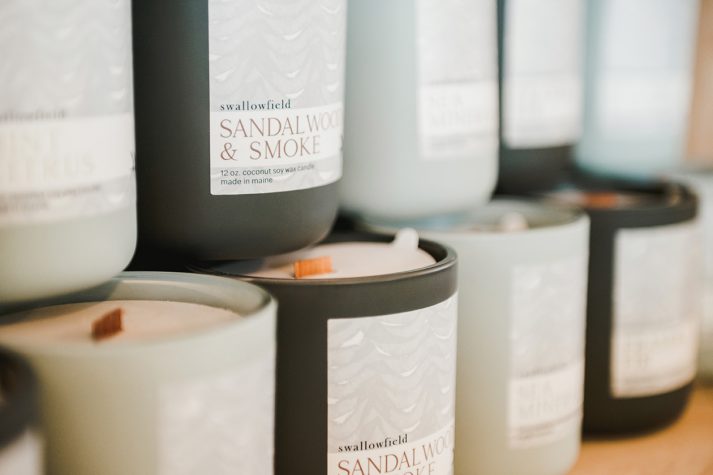 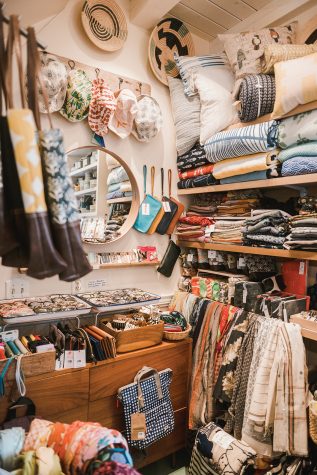 In the corner by the register one can find all sorts of accessories: sunglasses and reading glasses by Izipizi, sturdy tote bags made in New Hampshire, linen and fine wool scarves, and colorful mittens and gloves. Throw blankets and pillows are stacked on the shelves above. 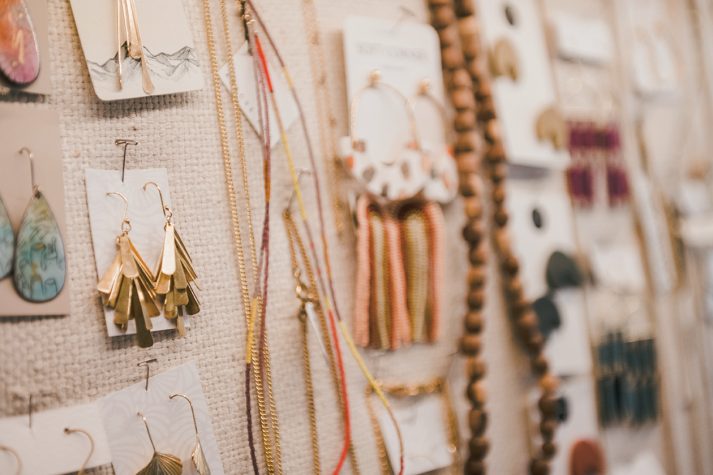 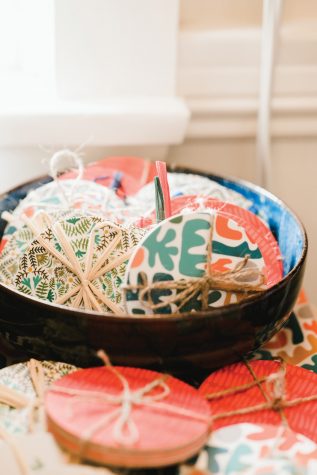 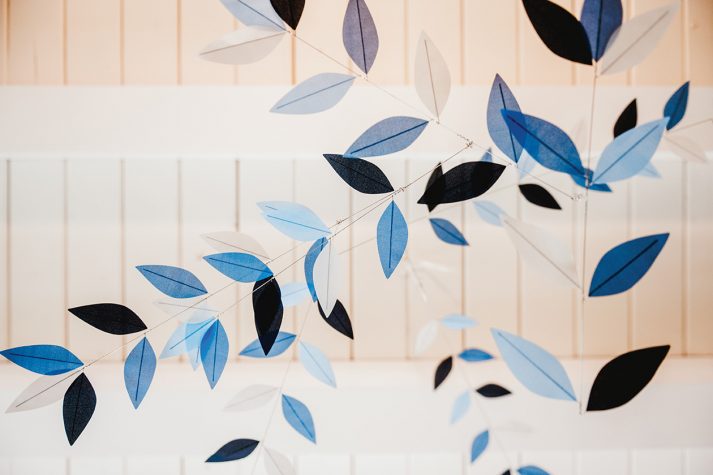 In a small white clapboard building on the edge of downtown Northeast Harbor, Jennifer Judd-McGee has packed her shop Swallowfield to the rafters, literally. An acclaimed artist herself, Judd-McGee has filled shelves, display cases, and the walls from floor to ceiling with art, home goods, and accessories.

Although they had started their family in Portland, Judd-McGee says, “My husband and I both grew up on Mount Desert Island. His mom had left us a small house, and we had been renting it out to pay the taxes every year, just coming up for a couple of weeks in the summer. But when the kids were getting close to middle school age, my husband was looking for a new job, and on a whim, he applied up here. He got the first job he applied for.” It was a great move for their family—“the school in Northeast Harbor is so wonderful,” she enthuses—as well as for Judd-McGee herself, whose art, originally a stress-relieving outlet from her day job at Planned Parenthood, had begun to sell briskly on Etsy. When they moved to Northeast Harbor, plans for a storefront to sell art (and maybe a few other things) began to take shape in her mind. “I was working for myself as a freelance designer and artist. The store was a natural extension of that work,” she says.

“I had met so many cool people doing what I had been doing at craft shows and galleries,” she continues. “I felt really certain of what kinds of things I’d like to have in the store.” Almost immediately, she found a supportive artistic and retail community on MDI. “Spruce and Gussy in Bar Harbor had been showing a lot of my art and selling prints of it. They really helped me get Swallowfield going.” Rather than seeing her new little shop as a competitor, she says, they felt like collaborators. “We pretty much exist in parallel ways where we try to really support each other. I send people over there all the time. I’m type B, so it’s very much how I want to operate.”

What was it like to be a self-proclaimed type B business owner in that most challenging year for all businesses, 2020? Judd-McGee’s sister had set up Swallowfield’s website the year before, but most sales still happened through the physical shop. All that changed with the coming of COVID-19. “All of a sudden, the whole town shut down, and I just decided to go into the shop by myself. I started by taking pictures of all the puzzles we had. We had a lot of great, small illustrators that had licensed their art to different puzzle companies. So I posted a whole bunch of pictures and I was like, if you pay the $5 shipping, I’ll get this right out to you.” She laughs as she recalls, “I didn’t know what was going to happen. But I basically sold, I don’t know, 200 puzzles within a couple of days!” A year that could have been a disaster for a small business in a vacation destination turned out to have some silver linings: “It was a fun challenge to do it safely. My daughter offered local delivery, contactless, as far as Ellsworth. My sister and I started getting more stuff online because we weren’t sure when the shop would be able to reopen.”

The expanded website does convey the breadth of Judd-McGee’s offerings. One could buy everything from facial moisturizer to throw blankets while also finding a pair of funky sunglasses and some art supplies, as well as a cookbook and a vase. “I’m constantly trying to keep it new and exciting for people,” she says. Still, there is something magical about the space itself and the discoveries one can make while browsing. There are plenty of local makers represented (Mulxiply jewelry, ChappyWrap blankets, Katharine Watson tea towels) but also creative items from around the country (like Portland, Oregon, designer Lisa Congdon’s bright graphics) and the world (traditional Japanese paintboxes, anyone?). As the principal buyer, Judd-McGee is always looking for new and interesting stuff. “It’s kind of smaller, more independent designers; lots of women-owned brands; and ethical sourcing, which I like,” she says.

Swallowfield carries so many wonderful items that Judd-McGee hesitates to play favorites, but as we talk, she warms to the subject of the art she sells. “I definitely have personal connections with the artwork. I feel I have to have that, so I feel comfortable and authentic talking about it. I want to feel good about anything I have in here. That’s true for everything, but especially about the art,” she says. “For example, I found a painter through Instagram named Nat Dickinson who spends every summer in Deer Isle. I loved his paintings, so I reached out to him. We had a show that went really well and formed a real friendship. There are so many people in town who love his work now, and we sell it online to people that have never even been to Maine. He’s my number one artist that I have carried since the beginning.” She also showcases other local artists: “There’s a woman named Susan Graeber who I love. She comes up in the summer and does a lot of paintings with gouache. I had a show of her work a couple of years ago, and now she’ll send me paintings periodically throughout the year. We always have some of her paintings in the shop. I’ve also developed a friendship with her daughter, Elizabeth Graeber, who is a great illustrator. Her style’s very kind of New Yorker cover. I commissioned her to do one of the wooden puzzles, which was a huge hit.”

Judd-McGee notes that the wooden puzzles are particularly popular with what she calls her “summer customers,” and indeed, she has lots of part-time residents who return year after year to her shop. Summer visits to Swallowfield can mean squeezing around these regulars and other visit-ing design enthusiasts, but in the winter the shop has a quieter, more relaxed vibe. “We’ve always been open in the winter, but in the last couple of years, I’ve gotten a couple of wonderful employees. I could probably close for a little while, but I love being able to employ them year-round. Also, it’s really fun to put a lot of energy into the website when we’re quieter.” And while it may be harder to reach that perfect card or potholder when the tiny shop is full of people, Judd-McGee cherishes the little space she’s created. “I can see some people walk in, and they’re like, whoa, there’s too much stuff in here. I get that, especially for someone who can be visually overstimulated,” she says. “But for other people, I think there’s a casualness about the store that makes them feel more comfortable choosing things they like, not that they just think they should have in their house. I hope the store says that it’s okay to be funky and sort of develop your own style and have a wall of small paintings that you build over time. That’s how I live at home too. So the store has evolved into that, in a good way.”

Outstanding in the Field

Judd-McGee says that in selecting items for her shop, she keeps William Morris’s famous dictum in mind: “Have nothing in your houses that you do not know to be useful or believe to be beautiful.” She says, “I’m always thinking about beauty and use, and how we get that Venn diagram to be a circle! I love anything functional that’s also pretty.” Here are some of her picks that fulfill both requirements.

• While she notes that people are sending fewer cards than when she opened the shop seven years ago, Judd-McGee won’t be getting rid of her comprehensive selection anytime soon. “I’m a little bit of a paper collector and when my mother- in-law died, I inherited her card collection. She loved the cards from Saturn Press out on Swan’s Island. I absolutely love working with those guys, so we always have one whole wall of their cards. It’s one of my favorite companies we carry, and people love it; the cards feel timeless and old-fashioned in a way that I appreciate,” she says.

• “I love that we sell a decent amount of pottery,” says Judd-McGee. “There are three potters in particular from Maine that I just love: Elizabeth Benotti, Sasha Lennon, and Elizabeth Jerome.” All three make striking vessels that can hold flowers, coffee, or cereal stylishly.

• Judd-McGee asks, “Did you see the oyster shells? That’s my friend, Joanna Rigby-Jones. She works with Bar Harbor Oyster Company and gets all their shells. She picks them up and first it’s a whole process of cleaning them and bleaching them; then she applies multiple layers of collage, and finally, she puts gold paint around the edge of each one. They’re the rare gift that is perfect for somebody who doesn’t need a damn thing, but wants a little something pretty to put their earrings in at night, you know?”

• At the back of the shop, by the cash register, lies the jewelry section. I usually gravitate to the small gold hoops, but Judd-McGee urges me to branch out: “There’s a newer jeweler who lives on MDI that you might want to check out. Soft Corner is her business name. Check her out on Instagram; she does this very modern looking polymer clay work. Stuff like chunky hoops and some other things. They just fly out of the store—she’s got a great palette that really suits us.”

• Finally, there are Judd-McGee’s own distinctive surface designs, often based on her paper-cutting art. “I started doing Swedish dishcloths a couple of years ago, in 2020. When I started putting my own art on there, it clicked for a lot of people. They’re one of those things: they’re only $6, and everybody could use one!” Her cards also sell well, as do her colorful plywood trays. “Every year, I’ve done a new set of wooden trays from Sweden, which has been really fun. I have a lot of customers that love those; they make good engagement presents, or housewarming presents, that kind of thing.” She laughs, “Eventually, I think people are not going to need any more trays, but they keep asking me to make more.” 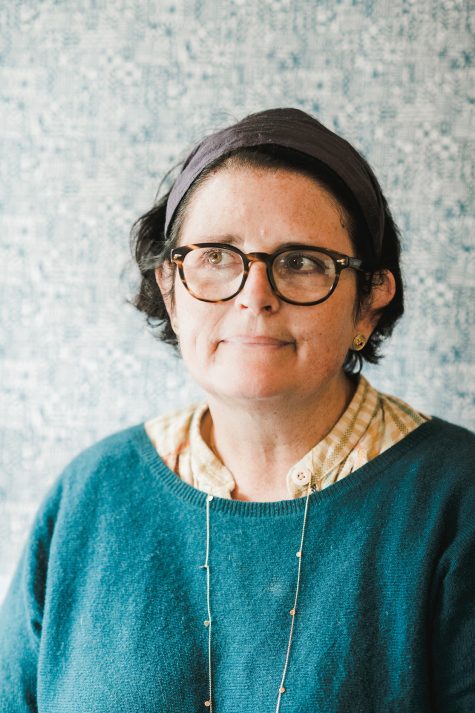 Visitors to Swallowfield will often find Jennifer Judd-McGee smiling behind the counter of her shop on Main Street in Northeast Harbor. 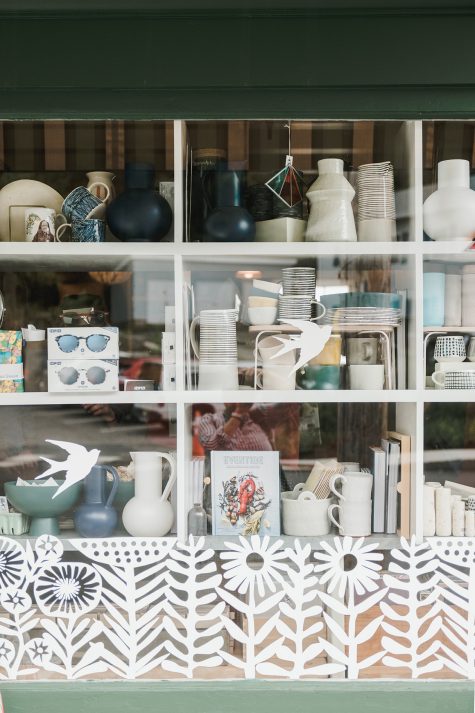 In a shop where space is at a premium, even the windows have shelves to showcase the multiplicity of pottery offerings. The windows are edged with vinyl reproductions of Judd-McGee’s paper-cut art. 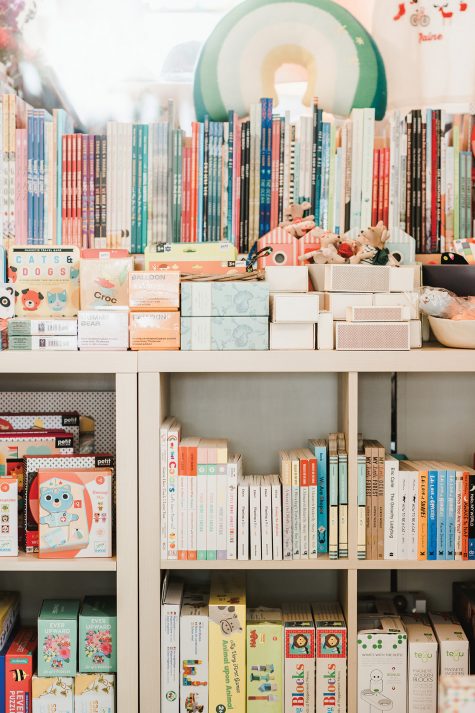 Swallowfield has a large selection of picture books, puzzles, and games for children, as well as art supplies and soft toys from Danish company Maileg. 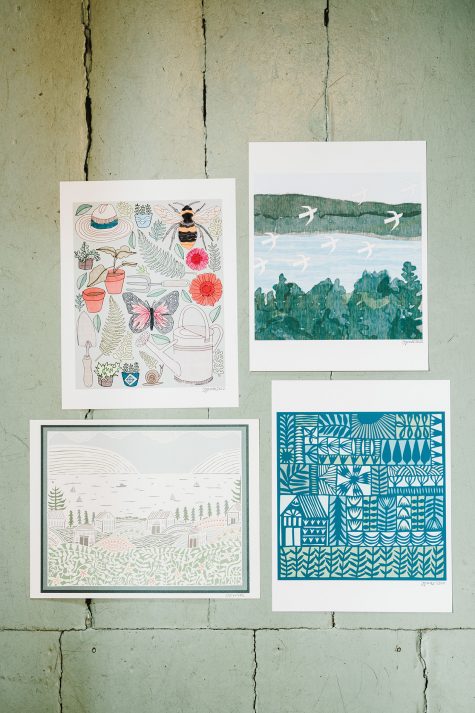