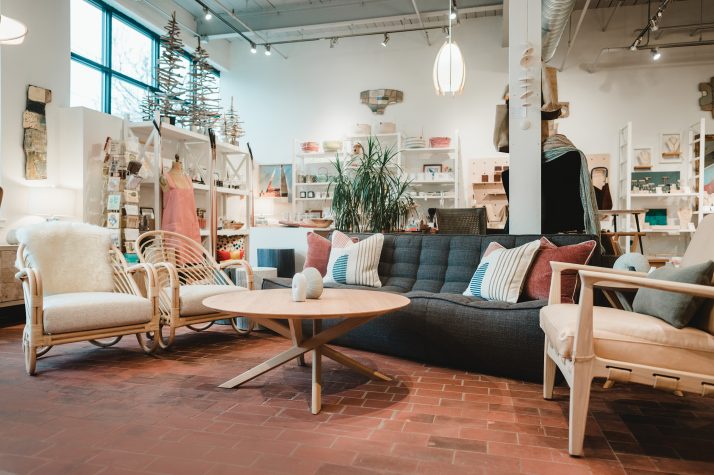 The Venn and Maker showroom in Portland. 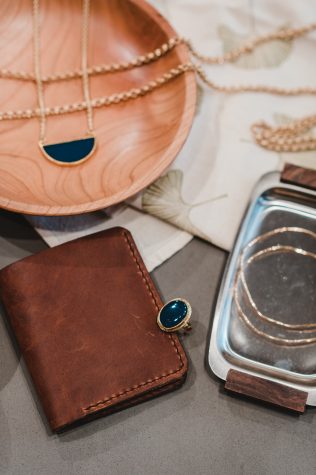 In addition to artisan-made jewelry, wallets, and wood bowls, the showroom carries vintage items such as this Japanese stainless-steel tray. 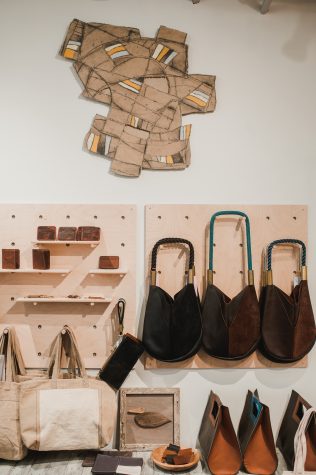 Artwork by Mark Little hangs above a selection of linen and leather bags. 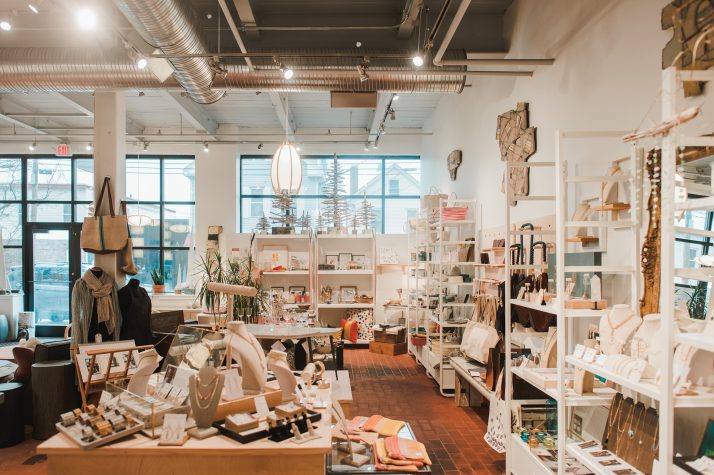 Portland's Venn and Maker showcases a variety of Maine-made goods, from accessories and lighting to artwork and jewelry. 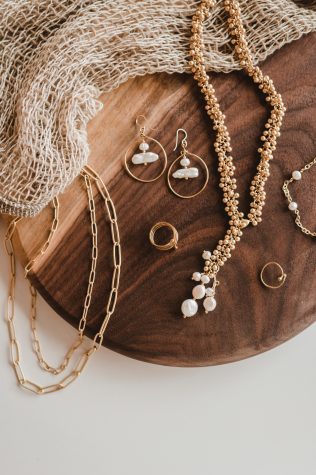 The pearl-and-gold jewelry is a collaboration between Venn and Maker and artisan Sharon Herrick of Illuminated Me, and the brass coil rings are by Svea Seredin.

When former investment banker Michael Fortier and photographer Samuel Strickland flung open the doors of Portland’s Venn and Maker in 2017, they had one goal in mind: to showcase Maine-made goods in a new way. “I’ve traveled all over the world, and there is as much skill here as anywhere else,” says Fortier, a Winslow native who splits his time between Brunswick and London. “I grew up going to design fairs, and the maker lifestyle has always seemed tough to me—especially with the harsh weather here. I wanted to make quality product available in a better environment, one that goes beyond the traditional gift shop or craft store.” (Items adorned with lobsters, lighthouses, or lupines— or “the three Ls,” as Fortier refers to them—are strictly forbidden here.) The result, says Fortier, is “the type of refined retail experience that one might see in a major city like New York, London, or Paris,” offering everything from home accessories and jewelry to art and lighting.

Venn and Maker is constantly evolving, but the biggest change in recent months has been the addition of furniture, thanks to a new partnership with local designer Vanessa Helmick of Fiore Home. Helmick closed the retail arm of her business—which was located down the street from Venn and Maker—when the pandemic hit, but Fortier didn’t let her get far before convincing her to curate her own permanent retail space within the showroom. Now a range of modern furnishings from near and far—including sofas, chairs, tables, stools, headboards, and even one-of-a-kind rugs—complements the shop’s home accessories, art, and lighting by local artisans. “Vanessa’s style matches ours perfectly,” says Fortier. “She has a great eye for sourcing sustainable pieces with a cool northern European aesthetic.” This “Scandi-beach” look (“It’s the feeling of ‘hygge’ by the ocean,” explains Helmick) is rooted in clean lines, texture, and a balance of warm (sand) and cool (water) tones. “I grew up in the mountains outside Yosemite National Park, and I also lived in Southern California, so I’ve always been inspired by nature,” says the designer, who moved to Maine in 2010. With that in mind, Helmick favors modern-yet-comfortable neutral items with natural materials such as sustainably sourced wood (her go-tos are white oak, teak, and walnut), concrete, and resin, paired with durable, stain-resistant upholstery. “Everything on display is meant to flow together, so it’s easy to mix and match these products,” says Helmick. “It empowers people to know that they can’t mess it up.” In fact, Helmick and Fortier, along with showroom manager Erica Gammon, have creative brainstorming sessions to ensure that the two brands blend seamlessly. “I would tell Vanessa if I didn’t like something, but that hasn’t happened yet,” says Fortier. “It’s a great partnership.”

According to Fortier, Venn and Maker has come a long way since it first opened. “Back then, we had no choice but to be takers because we needed to have enough product to fill a shop,” he says. “Now we’re makers, collaborating with artisans to create work. And I love how the aesthetic of the showroom is always changing as a result of what these arti – sans are currently thinking and doing. I hope it serves as a magnet for other talented makers.”

KNOW BEFORE YOU GO

-In addition to artisan-made goods and new furnishings from around the world, Venn and Maker offers vintage, found, and repurposed goods such as tabletop items, jewelry, and books, both in-store and online under its brand Urban Hunt.

-When it comes to art, Venn and Maker can arrange for customers to see a piece in their home before committing. “We work with a small number of artists, who are very involved in the entire process,” says Venn and Maker‘s owner Michael Fortier. “This way, the buyer feels like they’re working directly with the artist.”

-As a result of the current industry-wide crisis for furniture stock and increasing custom lead times, designer Vanessa Helmick of Fiore Home is focused on providing as many stocked options as possible. “It has been so busy that we’ve been selling furniture right off the showroom floor,” says Helmick.

-Venn and Maker will soon launch two new specialty websites, which can be found via their main website: one will be dedicated to furniture (modernandvintagefurniture.com), and the other to contemporary art (contemporaryartmaine.com). “The website has really started to take its own direction,” says Fortier. “We’ve sold product to people in 38 states. It’s exciting to think about someone in Idaho finding our little store in Portland.”

Due to the pandemic, the showroom at 65 Washington Avenue may be operating by appointment only. For more information or to make an appointment, call 207.835.0590 or go to vennandmaker.com. 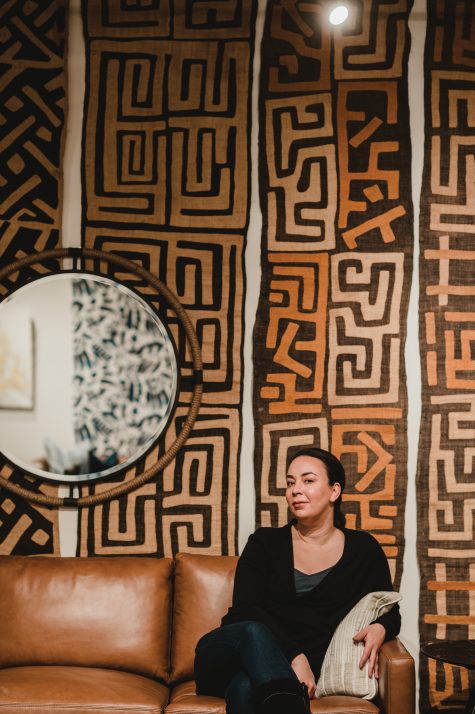 The showroom recently partnered with designer Vanessa Helmick of Fiore Home to add a curated collection of furniture to the mix. 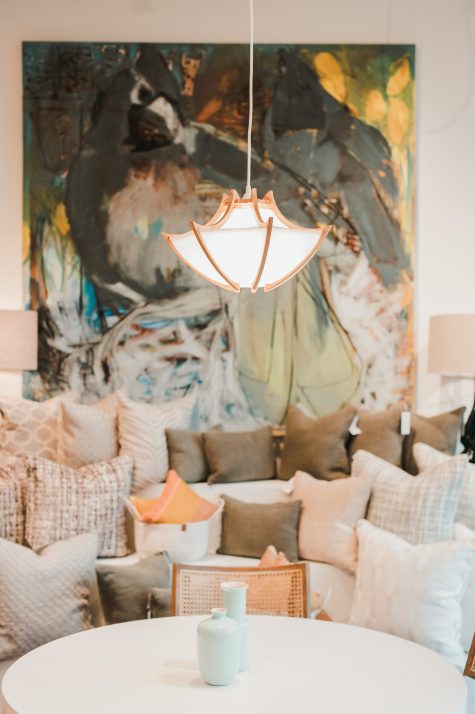 The light fixture is by Otis Baron, while the painting is by Erin McGee Ferrell. 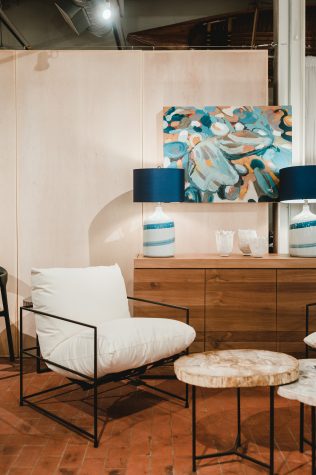 Furniture offerings include a teak sideboard by the By the Belgian brand Ethnicraft, the Cumberland chair, and petrified-wood accent tables; the artwork is by Erin McGee Ferrell. 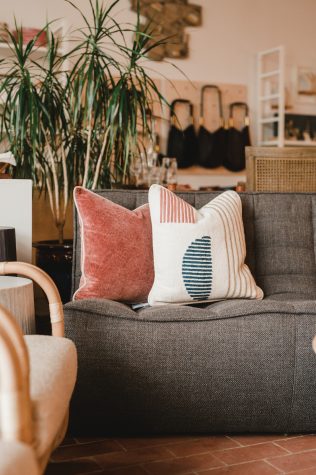 Throw pillows add a pop of color to an armless sofa by Ethnicraft. 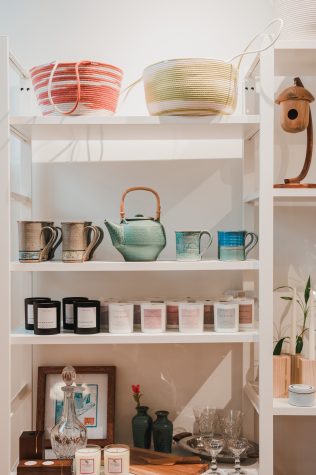 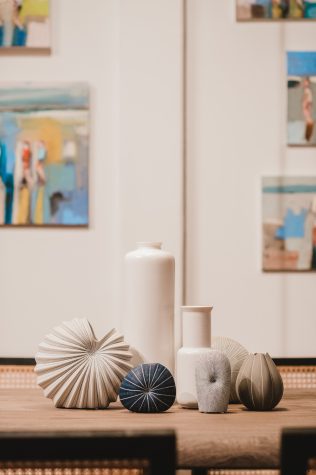