Down to the Studio with Mr. Van Dusen 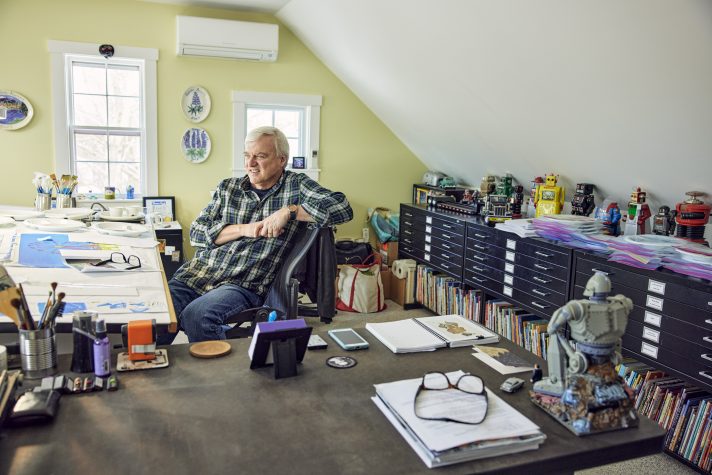 The artist in his studio. Chris Van Dusen studied fine art in college, and his career combines the principles of classical oil painting with the sensibilities of an illustrator. His heroes, he says, are Robert McCloskey and Dr. Suess. 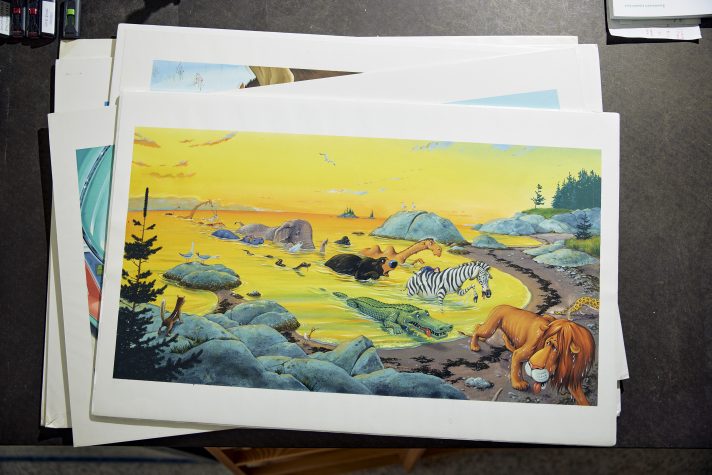 Color is incredibly important to Van Dusen. He works in gouache because it provides him a degree of control over the hues and tones that you don't get in watercolor, as seen in this page from The Circus Ship. 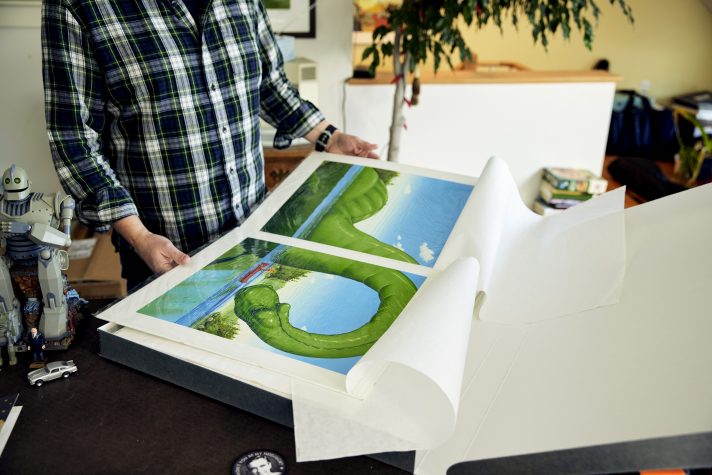 Whimsical yet grounded in Maine, Van Dusen's work takes inspiration from the natural landscape around his Camden home, like the lake depicted in this page from Hattie and Hudson. 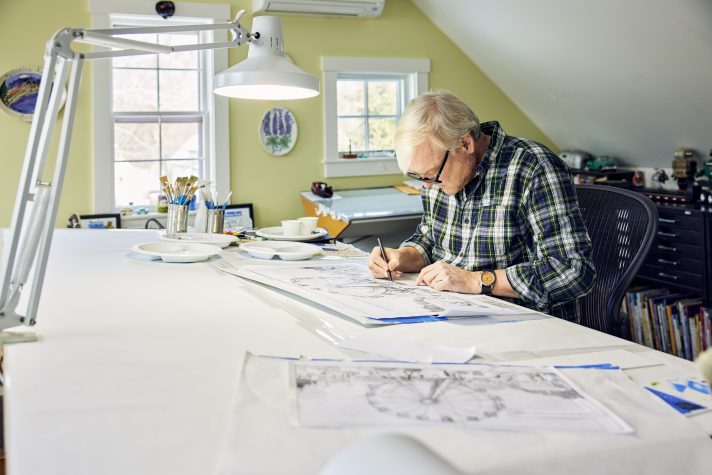 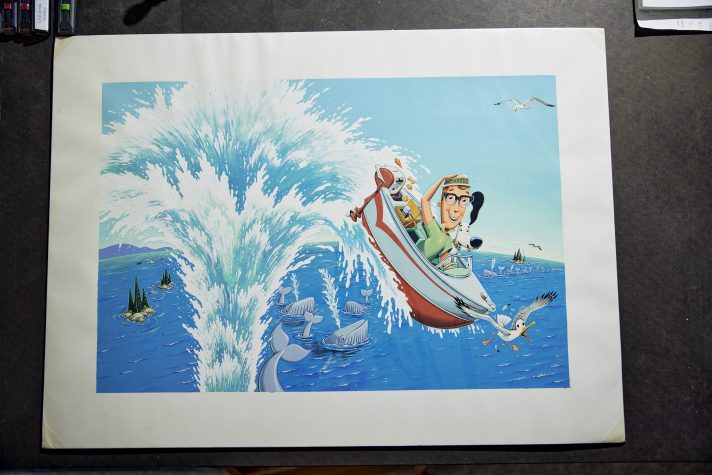 Although it's not explicit in all of his works, he credits Maine for inspiring his scenery, including this scene of joyful whales, squawking seagulls, and adventurous Mr. Magee. 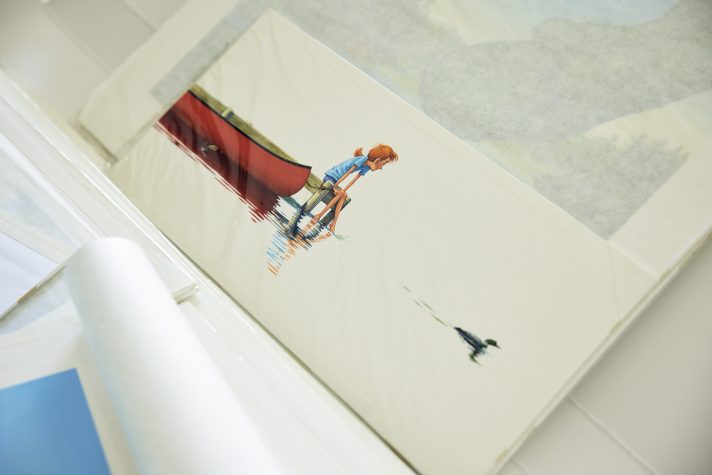 A detail from Van Dusen's book Hattie and Hudson. 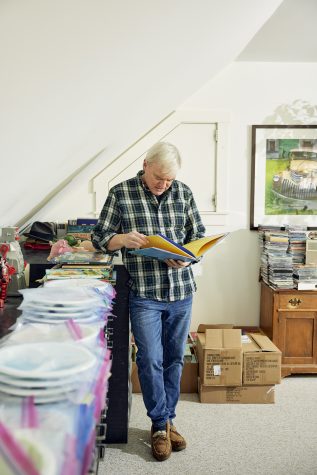 While he could sell his paintings, Van Dusen has decided to keep them for now. Someday he hopes to donate his works to a museum of illustration. 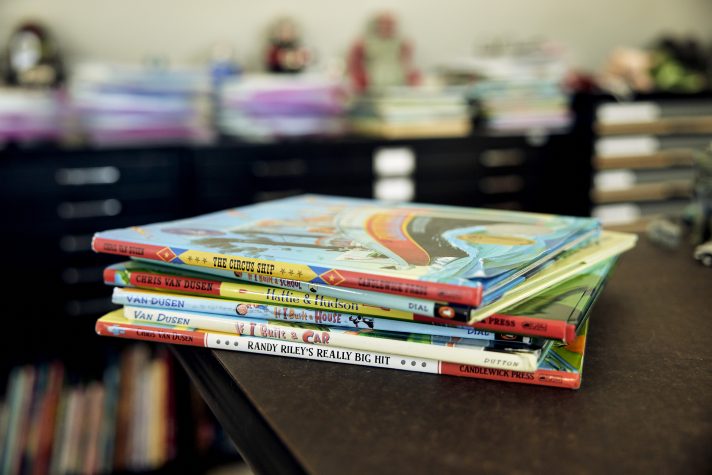 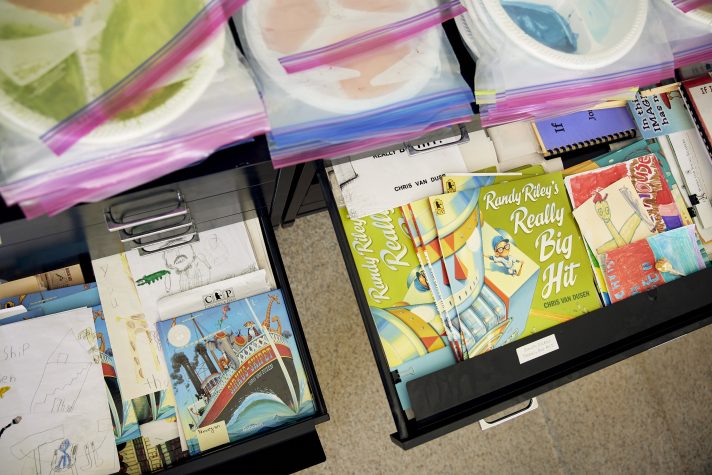 Van Dusen has a system to ensure that colors remain the same throughout a book. He uses plastic plates sealed in ziplock baggies, which keep the paint from drying and allow him to use one groupof hues while he slowly builds the book.

You wouldn’t know it from Chris Van Dusen’s popular 2009 children’s book, The Circus Ship, but the true story of the shipwreck is a tragic one. There was a fire, too few lifeboats, a few horses that escaped to shore, and many casualties. Yet something about the idea of a ship filled with circus animals off the Maine shore stuck with Van Dusen. He saw the potential for magic embedded in this bit of local history. “It was fun to place a story on an island,” he says. “The containment of an island makes it intriguing. You can’t just go on forever. You need camaraderie and cooperation, and you need to work together to survive.” He pauses. “That’s also the theme of the book I’m working on right now, but I can’t tell you much about that.”

Van Dusen is a classically trained artist and illustrator who has sold fine art in Portland galleries, worked at a greeting card company, done various bits of editorial work for magazines, and worked with popular children’s book author Kate DiCamillo on her Mercy Watson series. Through these various projects (and over the course of several decades), Van Dusen honed a style that he now uses to spin his own yarns for young readers. “I call it painterly cartoons,” he explains. His images are more sophisticated than the average pen-and-ink cartoon, but they’re still playful. “When I look back at my first book [Down to the Sea with Mr. Magee], Mr. Magee was pretty cartoony, how I painted him,” Van Dusen reflects. “I probably wouldn’t paint him that way now. I’ve changed a bit— my people are a little more realistic, and I’m including more diversity in my books.”

However, you can still recognize Van Dusen’s world from book to book. While he doesn’t name Maine as the setting for most of his works, the natural features of the midcoast appear time and again. “It’s so visually beautiful here, it’s hard not to have it seep into your work,” he says. Another thing that’s stayed constant is his choice of paint. “I’ve worked with watercolors, and I painted with oils in college, but I don’t use oils for my illustrations because it takes so long to dry,” he says. Instead, Van Dusen paints his lively, colorful, retro-inspired scenes using gouache. Sometimes called “opaque watercolor,” gouache is a medium that allows a greater degree of control than traditional watercolors. “You can cover up mistakes and add layers,” he says. Plus it “reproduces really well,” so it’s great for picture books, says Van Dusen. “If you compare the original illustration to the printed version, the colors are spot on, even with tough colors like aquas and oranges. That doesn’t always happen.” Back when he made art for greeting cards, Van Dusen often saw his carefully mixed turquoise faded to a dull blue, his bright orange muddied into brown. “It was so discouraging when you had a piece of art you were happy with, to then see it change.”

Van Dusen is a self-described “stickler” about colors. “If I’m reading a children’s book, and I see the kid’s shirt change from orange to purple halfway through, that drives me crazy,” he says. In order to keep colors consistent throughout an entire book, he mixes the gouache on plastic plates (the kind, he says, where “there’s sections for your chips, your coleslaw, your lobster roll”) and stashes them inside large ziplock bags for the duration of the book’s creation. And this can take a long time.

But first, Van Dusen begins to think up a story. He prefers a traditional story arc, with a clear beginning, middle, and end. “A lot of children’s books are a bit more concept-based now,” he says. “But I like working with a traditional plot.” After he’s made a story map, he goes through and works on the rhymes. “I write them down as they pop into my head, which doesn’t happen linearly,” he explains. Once he’s rhymed all he can rhyme, he submits the text to his editor and begins working on sketches. Finally, after all that is done, he’s ready to start painting. “It takes me about nine months to a year to make a book,” he says. “I work so slowly. And I’m working slower and slower as I age, but I like that. I enjoy books that have a lot of detail in the pictures. Robert McCloskey has always been one of my favorite illustrators because of that.”

While several parents have approached him over the years about selling his paintings to use as nursery decor, Van Dusen has always said no. It’s not surprising that Van Dusen has a hard time parting with his paintings, considering all the work that goes into each panel and each story. “I’m not ready to part with them,” he says. “Once they’re gone, they’re gone forever.” (Van Dusen does have a few select prints for sale available on his website, but moving product isn’t his primary focus.) He has given pieces to local libraries, but he keeps most of the panels from past books in his studio. It’s useful for an artist to be able to look back at their past work, and growth is constant, even for longtime makers like Van Dusen. “I’m always finding new ways to paint and illustrate, like by using Q-tips or my fingers in the paint. It’s fun to experiment,” he says. “I think I’m getting better, still.” 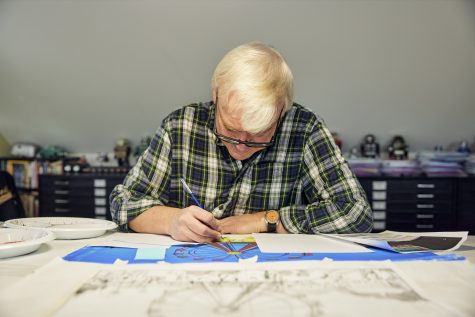 Van Dusen is always experimenting with new ways to use paint. 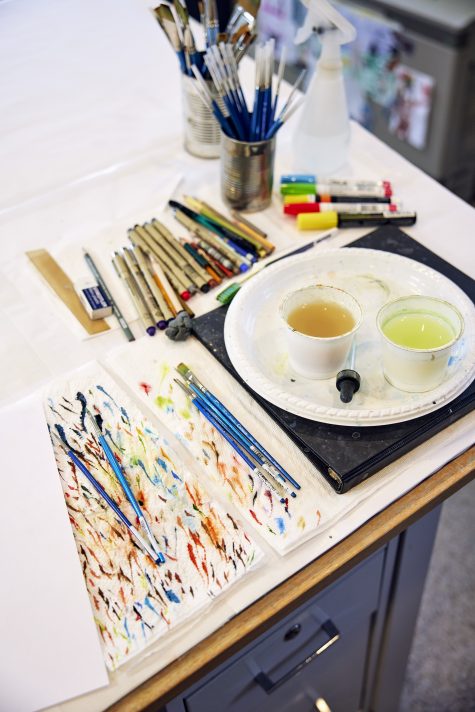 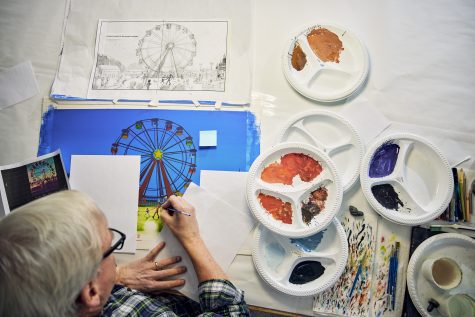 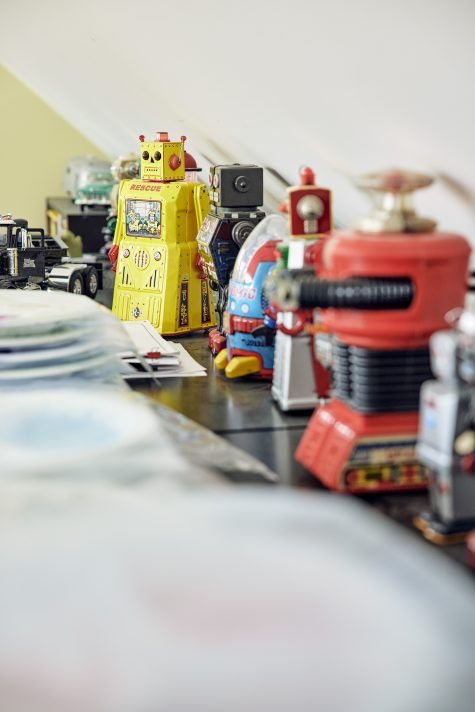