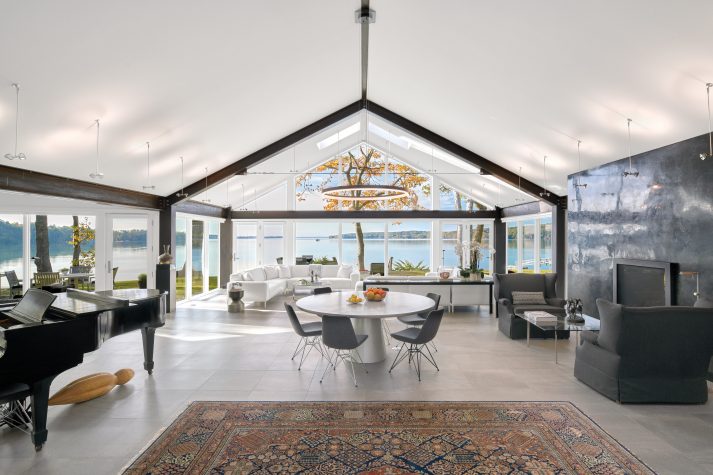 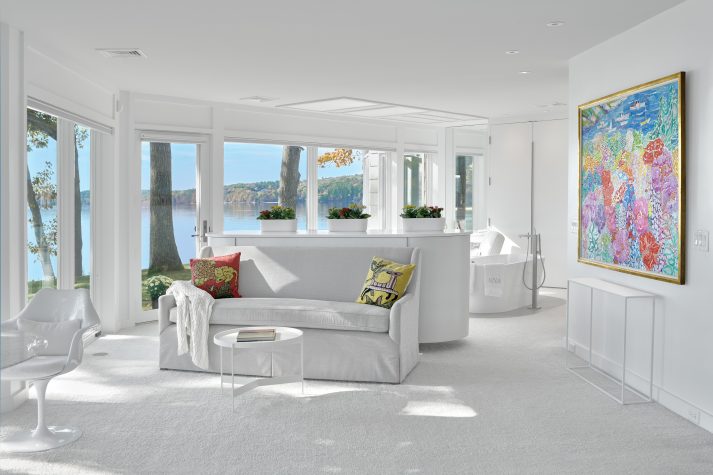 A comfy sofa offers an ideal perch for contemplating the richly blossoming garden of artist Rueben Tam on Monhegan Island as painted by Hans Moller. 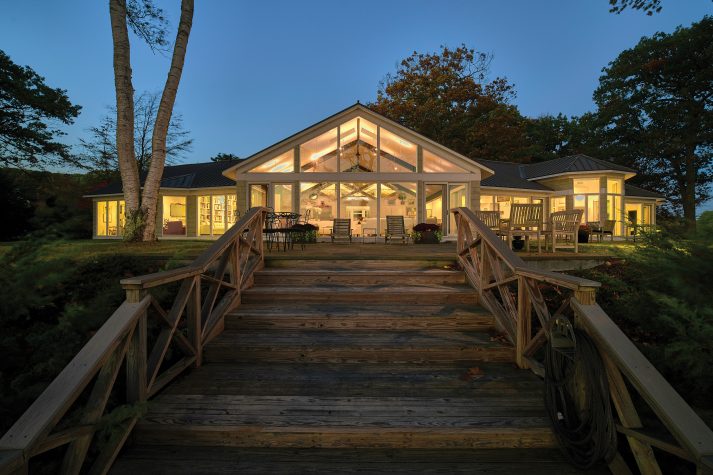 The back of the house is all glass to optimize the light and vista. 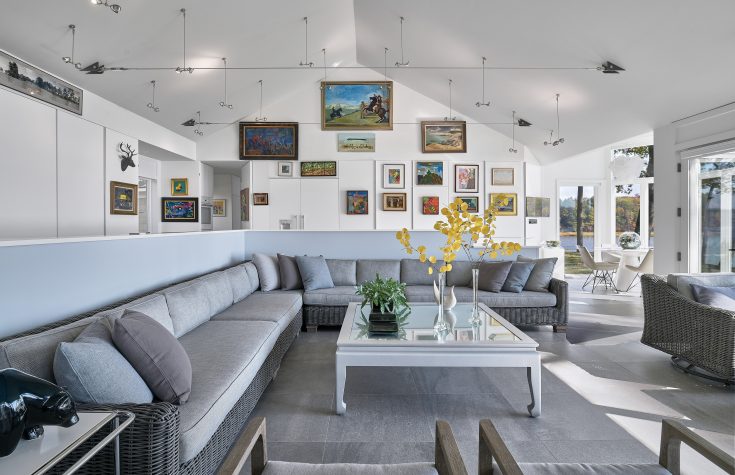 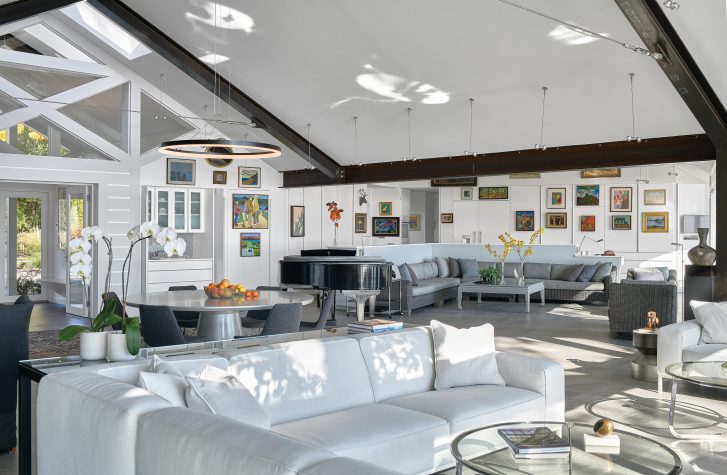 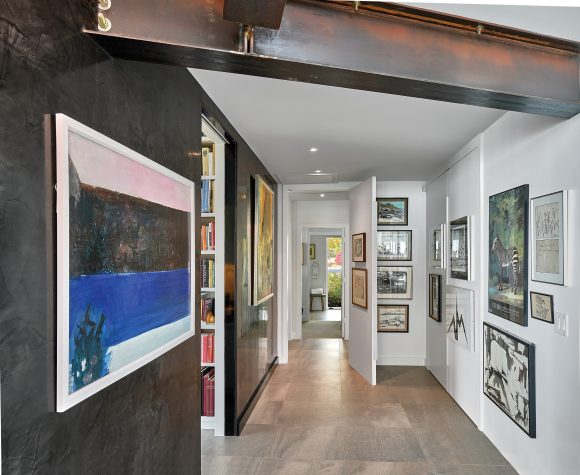 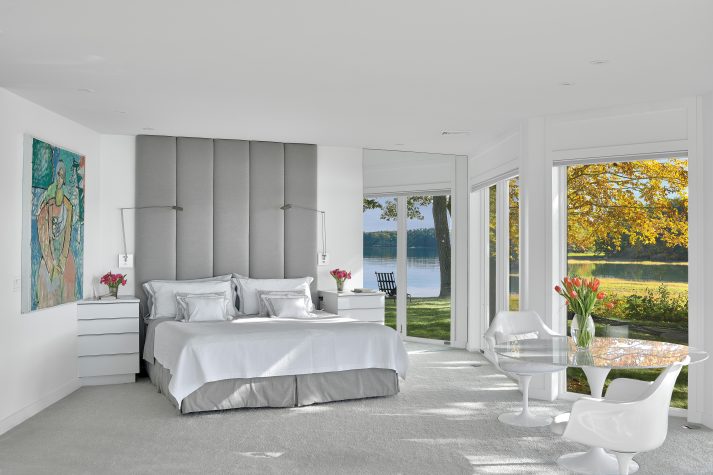 A Douglas Frat painting in the owner's bedroom faces an Eero Saarinen table and Tulip chairs by the wall of Marvin windows overlooking the water. 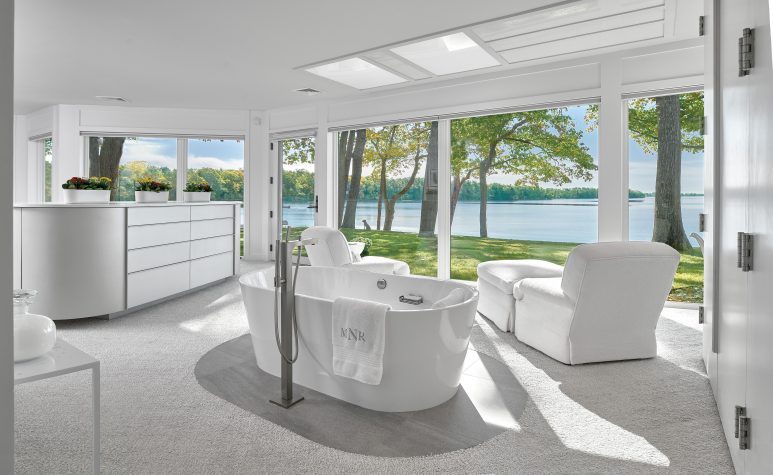 A custom cabinet designed by Galen with a television on a hydraulic lift—fabricated by builder Ron Tozier—divides the sleeping area from the bathtub and terrycloth-upholstered chairs. 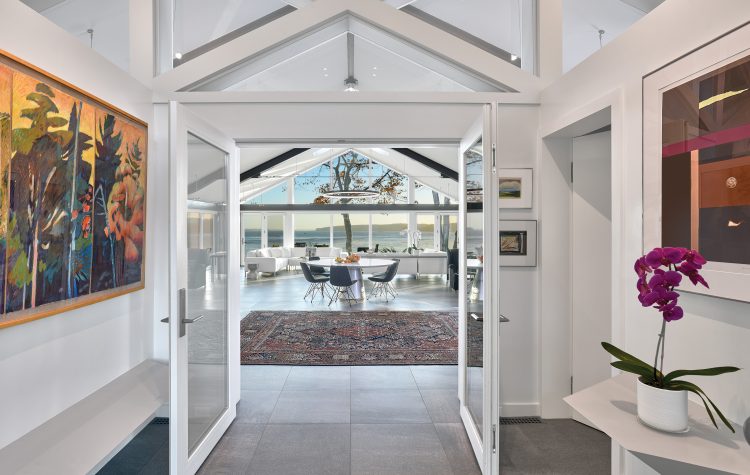 To the left in the entry is a colorful triptych by Alice Spencer; on the right, a Louise Nevelson lithograph. On the back wall, paintings by Elena Jahn, and Frances Kornbluth. Architect Evan Galen designed the chamfered, cantilevered bench and table. 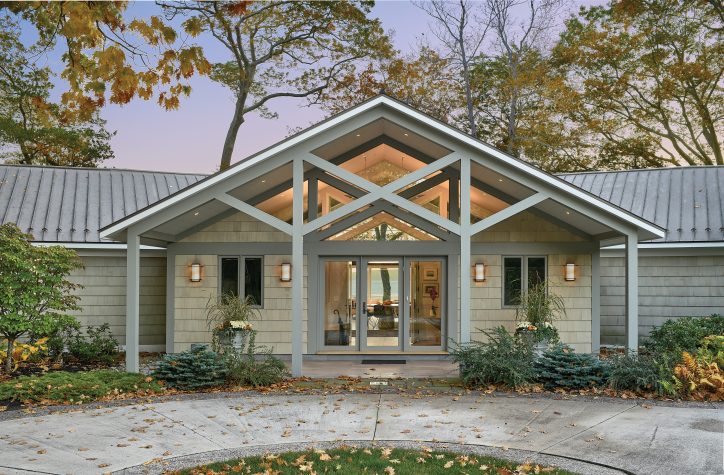 Long before moving to Portland, I traveled here with a talented New York architect named Evan Galen. By then, our professional relationship (I styled his residential projects for photography) had blossomed into friendship. Evan had renovated a grand house in Falmouth Foreside that he wanted to shoot. Usually, I barely meet the owners and simply exchange pleasantries. But this time they invited us to stay over at their enormous manse, to which John Calvin Stevens once added details and for which Frederick Law Olmsted had designed the grounds. Our hosts had amassed an extensive collection of Maine art, much of it from the artists’ colony on Monhegan Island, where they’d summered for years.

It was a thoroughly enchanting experience. The wife—a veritable sparkplug who had represented Portland in the state legislature for ten years and authored arts bills still in effect today—made lunch for the crew and served it in her beautiful garden. One day I bicycled with the husband—the senior partner in a large Portland law firm—to get bagels for breakfast, and on another evening they treated us to an elegant restaurant dinner.

Evan and I lost touch when my marriage hit the rocks in 2016. He and his husband summered in Maine, and I wanted to reconnect with him when I moved to Munjoy Hill two years ago, as well as with this exceptionally gracious couple. I knew they’d sold the large house in 2014 because Evan had told me he was designing something more livable for them farther north. When Evan’s phone numbers didn’t work and a search for his website turned up nothing, it occurred to me to type “Evan Galen obit” into my search engine, and to my great sadness, I learned he’d passed away from cancer the year before my arrival. Later, my friend and former gallerist Peggy Golden, who knew the couple, was able to reunite us.

Over hors d’oeuvres and a glass of wine, we reminisced about Evan, and they told me the story of their new home. “I wanted peacefulness, simplicity, and ease of maintenance,” says the wife. “I think that’s what you want when you get older.” (They are now in their 80s.) Stylistically, she adds, “I wanted to move into the twenty-first century, which I’ve always liked, but it didn’t work in the old house.”

In 2014 the couple purchased a single-level ranch. The husband recalls that the original owner had “wanted it to look like a house on Worth Avenue in Palm Beach.” True to this desire, the original architect and builders constructed a stucco structure with no formal foyer. “In Maine, you can’t just open the door into the living room,” says the wife. “You need a place to sit down and take off your boots!” Something would have to be added to create a graceful and commodious entry. The interior was chopped up, but says the wife, “We recognized that by opening up some rooms you’d have a sense of space and air.” What you’d also have, adds her husband, was “the longest unobstructed view of Casco Bay not blocked by islands.”

As Evan, the couple, and builder Ron Tozier had toured the house, they told me, Tozier pushed a pencil at a wall and it poked right through. “I think we handled that well,” laughs the wife. “We noted it and moved on.” But, recalls Tozier, “We found there were problems with the structure caused by moisture between the walls and insulation, and also the way it was graded. The bottom third of the house was rotten. Even the studs! We had nothing to save but the roof.”

Tozier called in Eric Dube of Casco Bay Engineering, who devised a way to hold the roof aloft while they rebuilt everything underneath. He also figured out how to support it once it was lowered again, this time onto a generously fenestrated building in which the main room’s support beams had been redesigned and relocated so as not to obstruct the spectacular marine panorama. “Evan wanted to get rid of the walls—all of them,” says Tozier, who had worked with him on other projects. Dube deployed steel beams and cables with beautiful custom turnbuckles that prevent the roof from collapsing like a pancake. Exposed I-beams and high-tech LED lighting impart a feeling of industrial cool.

“The design evolved up until the last moment,” says Tozier. “Evan was a design-as-you-go kind of guy. He never made drawings.” Sometimes he drew out his ideas right on the last remaining wall, remembers the husband. Evan might also sketch out something rough and fax it to Tozier from New York. For certain elements, such as the eventual entry vestibule, powder room, and large coat closet, Tozier’s team would do a mock-up with two-byfours, take a picture, and fax it to Evan. The architect would scribble comments on it and send it back, after which Tozier would create CAD drawings for the code officer. The resulting 4,500-square-foot, three-bedroom residence now boasts high ceilings and rambling spaces that are flooded with natural light.

The couple has always been very active in the visual and performing arts. The wife had started holding “Sunday Night Awakenings” in the 1960s that featured, among others, Black author Claude Brown, poet Robert Lowell, filmmaker Shirley Clarke, and painter Jack Levine. Over three decades, her husband chaired the Portland Symphony Orchestra, the Maine Arts Commission, and the Portland Museum of Art. They love to host large gatherings, so the main living– dining–kitchen area can comfortably seat 80 on casual, no-hassle wicker and Sunbrella-covered sectionals and roomy armchairs.

And the art collection? Opening up the warren of closed spaces in the original home left few walls for display. “Where were we going to put the pictures?” wondered the wife. “It was Evan who suggested hanging them on cabinet doors,” she says. Those doors, which conceal tableware, a bar, appliances, and decorations, run along the L-shaped kitchen at the perimeter of the main space.

Modern, bright, and colorful—and quintessentially Maine—these paintings showcase some of the state’s major talents, both living and deceased. They include Jay Connaway, Joseph De Martini, Lynne Drexler, Connie Hayes, John Hultberg, Henry Kallem, Louise Nevelson, and Alice Spencer. The works pop against the white cabinetry and, notes the wife, “give people sitting with their backs to the ocean an equally beautiful view.”

Down a hall and protected from sunlight are works on paper by Kallem, Murray Hantman, Waldo Peirce, John Raimondi, Ben Shahn, Reuben Tam, and Carol Wald (a late cousin of the husband’s). In the owners’ bedroom hang works by Hans Moller and Douglas Frati.

Despite this amazing assortment, says the husband, “We were never consciously collecting. Most were purchased from the artists directly on an installment plan.” His wife adds, “By spending 40 years with artists on Monhegan, we recognized these men and women were struggling. It was a very symbiotic relationship. We got a painting, and they got their regular 25 dollars a month.” The husband reiterates what is self-evident: “We tend to be attracted to people who are creative.”

Including, of course, Evan, who lavished many details throughout, such as a striking black Venetian plaster wall in the living room and ceiling-high built-in shelves in the library. “It wasn’t just a bookcase,” says the wife. “He took the time to make it into an architectural feature. The home is a homage to our dear friend. We respected his aesthetic sense, which was pitch-perfect.”

It remains a stunning tribute to a lovable mensch we will always miss. 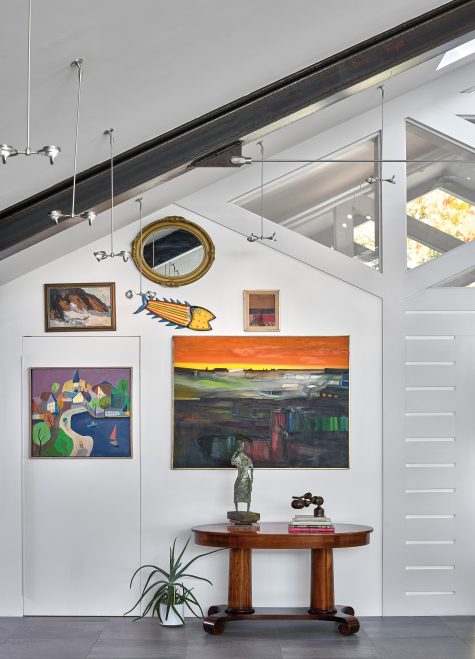 On the table from their former home are sculptures by Herbert Kallem (left) and Harriet Matthews, founder of the sculpture program at Colby College. Above it, sharing space with a whimsical fish and a mirror, are paintings by Brown, Conaway, De Martini, and John Hultberg. 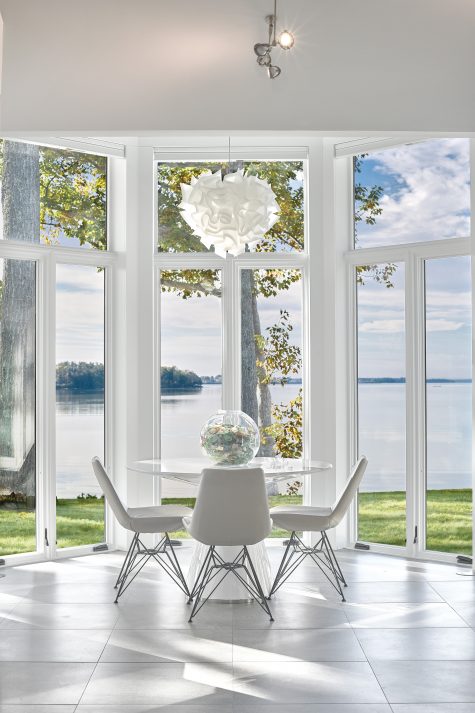 The breakfast nook with a large bowl filled with sea glass collected by the homeowners over the years. 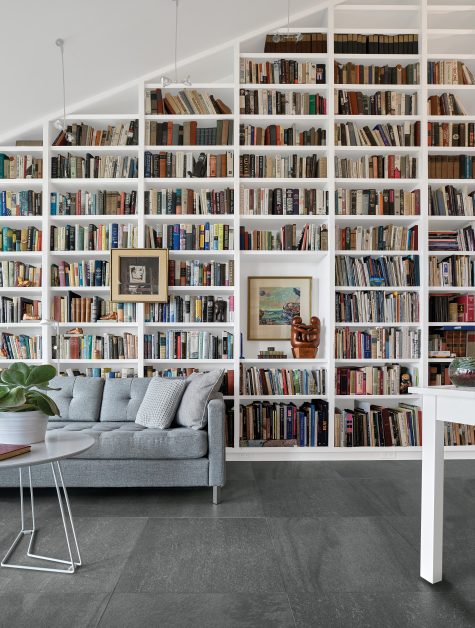 Hanging on the library shelves is a self portrait by Joseph De Martini and, in the nice, a Carol Wald seascape and a wood sculpture by a local lobsterman. 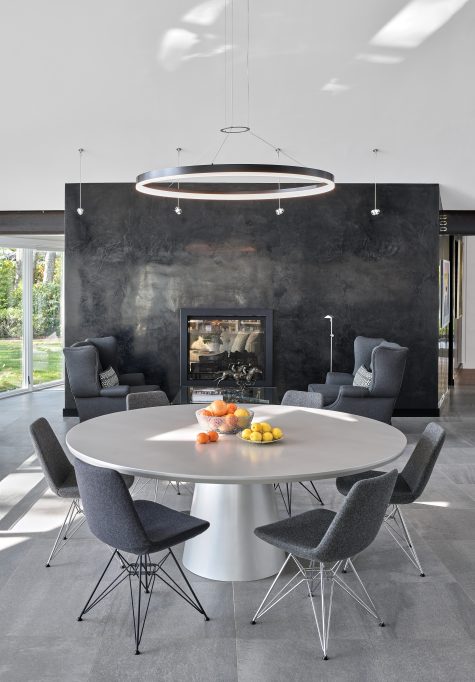