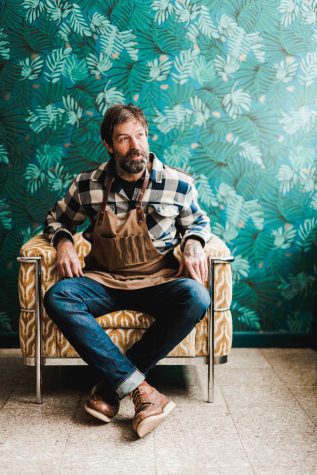 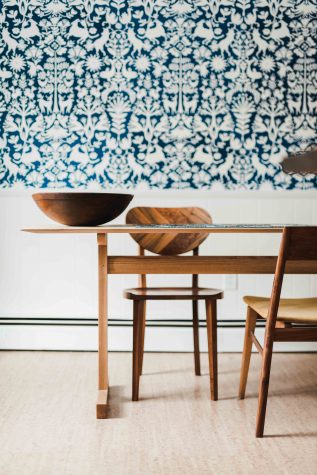 Inside Sutton’s house, which he shares with his partner, Megan. The wallpaper is from Hygge and West, and the maple and ash dining table and walnut chairs are all Sutton’s work. 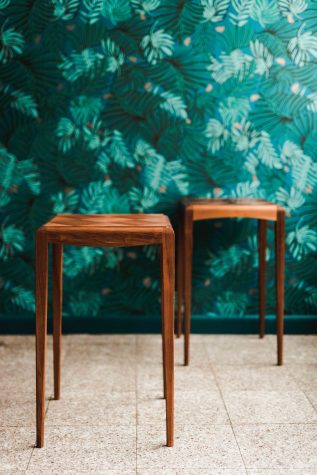 Side tables, currently for sale. 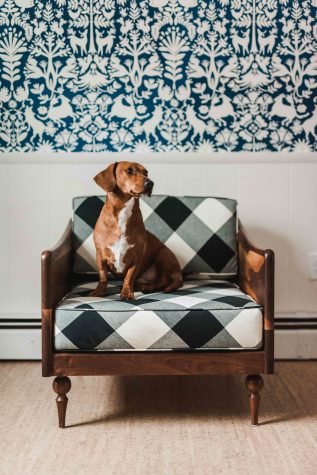 Emmet perches on a club chair. 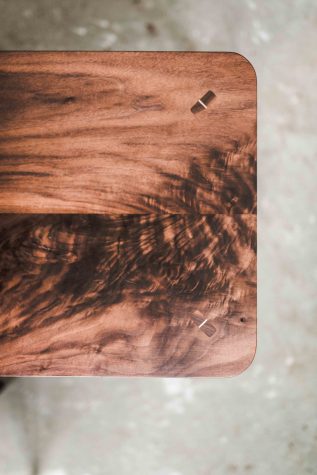 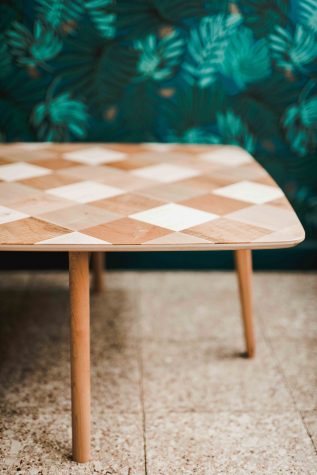 Another coffee table from the calendar line, featuring a checkerboard pattern. 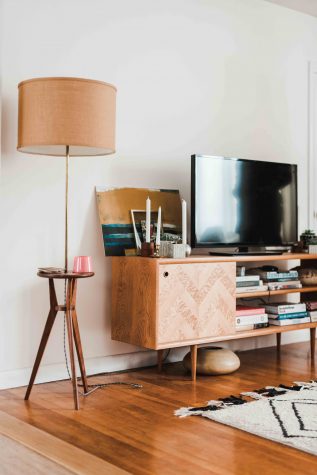 Another scene from Sutton’s home. 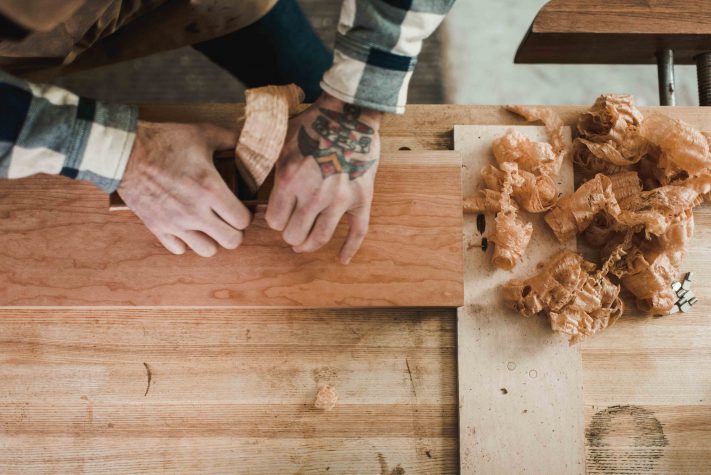 Sutton hand planes a board using a plane he made himself. 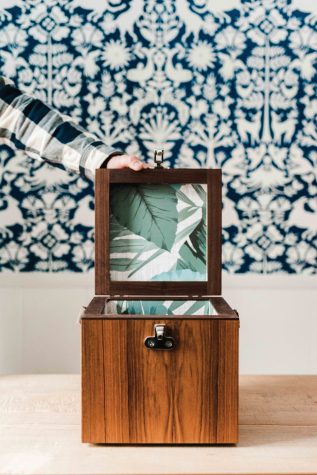 A clever little cooler made for days at the beach and lined with a jungle print Formica.

In 1999, Gabe Sutton was living in Ohio. He was learning how to make furniture, and part of this process involved sitting around in a basement with his best friend, drinking beers, listening to Wilco, and thumbing through copies of Woodwork magazine. “We would make dumb stuff, like rustic furniture and boxes,” he remembers. One day, they were doing precisely this when Sutton came across a picture that changed everything. It was from a profile of Seth Janofsky. “I looked at it and I was like, ‘This is the most beautiful thing I’ve seen in my whole life,’” he says. “That’s not furniture. That’s art.”

That moment, he says, “kicked it all off.” He still has that magazine somewhere in his Biddeford house, and he could dig it up for me, he says, if he had to. He also has a copy of Woodwork from 2012. Again, Sutton can remember exactly where he was when he bought that issue. “I was just walking around Portland with my partner, Megan, and I saw it on a shelf,” he says. “I was thumb-ing through and—bam—there’s my piece. It was baller. It was such a good moment.” It wasn’t just seeing his work in a magazine (that had happened before): “It was that piece I made in that magazine at that time. It meant a lot.”

Like Janofsky’s, Sutton’s output straddles the border between art and craft. Some of his pieces are highly decorative, like the chevron oars that hang on the wall of his studio and the intricate wooden screens he makes for restaurants, and some are highly functional, like the cabinets he builds for friends and the simple wooden benches he puts out at a lower price point for local clients. “Right now, I’m super focused on keeping things local,” he says. “That’s part of why I built my shop.” Although much of his career has been built online, selling work via Etsy, Sutton has begun to shift toward making more objects that stay in Maine. “We live in this Amazon world,” he says. “Since I’ve moved into this shop last May, I’ve been working primarily for friends.”

Among Sutton’s friends are a number of chefs and shopkeepers, other small business owners who are leasing storefronts in Biddeford, Saco, and Portland. He has built a 12-foot wall for Michael Macomber, owner of Elements in Biddeford, and has been working on a set of sliding doors for Thomas Takashi Cooke, who co-owns Izakaya Minato in Portland. Recently he’s been doing pop-ups with the owners of Part and Parcel, a specialty food and gift shop located in downtown Biddeford, where he sells cutting boards and hand-stitched leather wallets under the brand name Sutton and Co. “I have thought about whether I should have a few things I consistently pump out, but right now I’m too focused on furniture,” he says. “I like doing [Sutton and Co.] as a side hustle.”

Clearly, Sutton is the kind of person who relishes having many irons in the fire at once. It keeps him energized, and as he talks about his work he skips easily from one idea to another. We talk about making surfboards (he’s a devoted surfer, and I’m slowly learning), working on the Internet (something we’re both familiar with), and living in Maine (we’re both big fans). Although he likes doing cabinetry because it provides him a break from his busy mind, I can’t imagine this man behind a desk or working in a field that didn’t allow for constant change, constant creative output.

Sutton’s career path has served him well—for the most part. “I’ve seen really good times, and I’ve seen really bad times,” he admits. “When that happens, I dial my lifestyle down and live within my comfort zone.” Fortunately, he hasn’t had to do that for a little while. Sutton is coming up on 20 years in the furniture business, and he’s only recently decided on how he is going to celebrate. He plans to pay tribute to one of his favorite pieces of furniture: the humble coffee table.

“When I first got into making furniture, I geeked out on coffee tables,” he says. He shows me a finished piece that sits next to his workbench. It’s covered with a beautiful veneer of maple and birch, applied in a checkerboard pattern. “Coffee tables are overlooked,” he says. To celebrate his two decades of making them, Sutton is going to make a different coffee table each month, and each one will be inspired by a different design movement. “I’ll do Arts and Crafts, Shaker, Danish modern. I’ll do a deco. I’ll do inlay,” he says, talking quickly.

I ask him whether there was ever an ur-table, an original surface that imprinted on his mind. “Oh, yeah,” he says, “The table. My dad has it. My parents probably bought it when I was 12 or 13—it was like a bastardization of the Arts and Crafts style, made of oak with a dark stain.” Looking back, he remembers the lines of the simple piece, some hard, some soft. He remembers the patina of age and especially how it was used. “You could put your feet up on it,” he says. “It had soul. It had character.” Used or new, Sutton’s pieces also exude a certain sense of presence. They speak with his voice—brash, bold, and always artful. 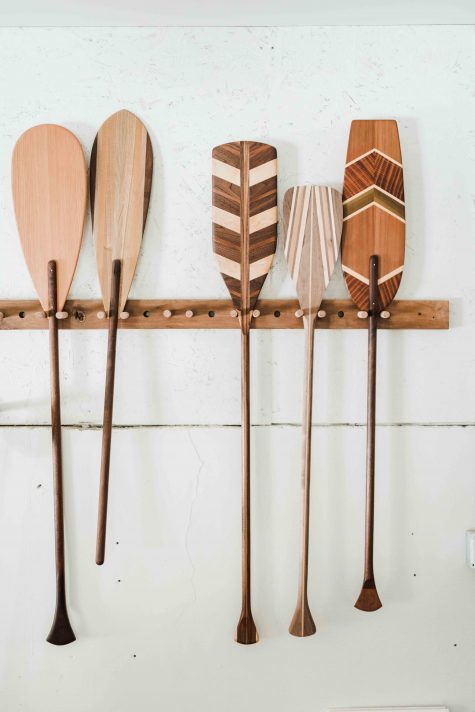 A selection of Sutton's custom oars. 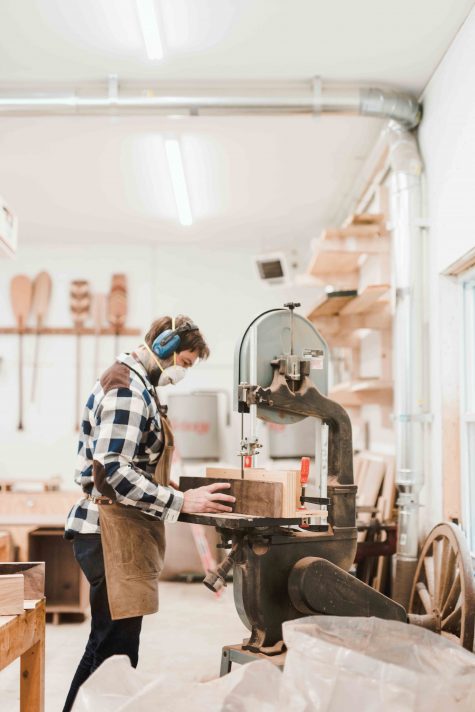 When he’s not working, Sutton can be found hand-stitching leather goods or out on the water surfing.