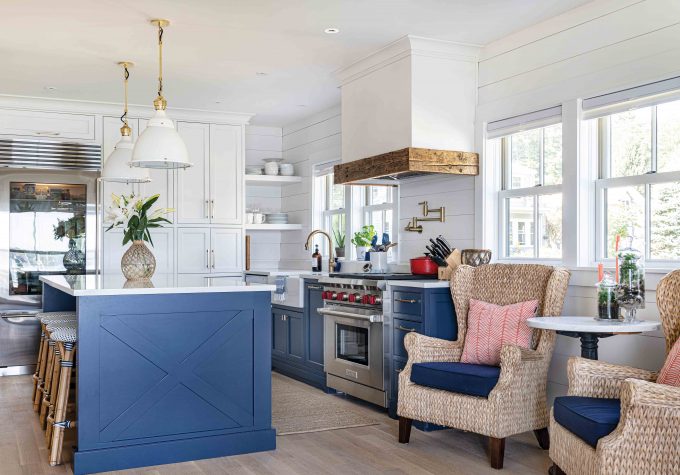 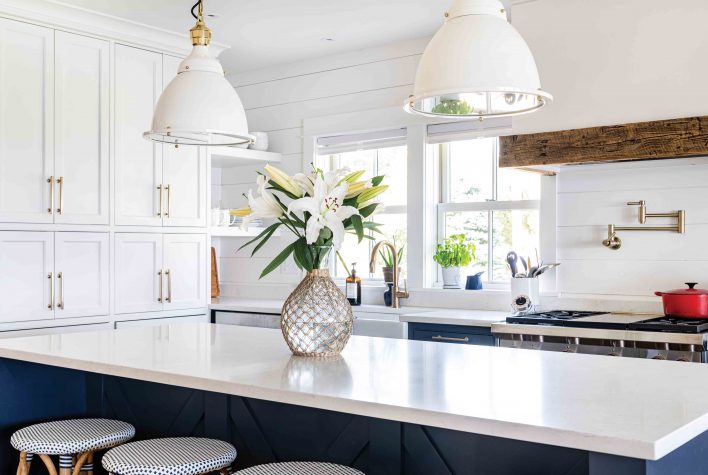 Hansen and Hamilton chose a nautical palette for the coastal home, covering the walls with nickel-gap pine paneling in Sherwin-Williams Snowbound. 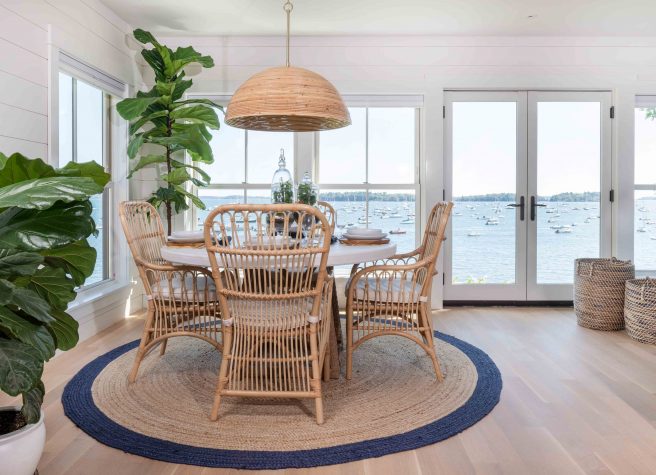 Hansen enlarged the windows on the ocean side of the house to take advantage of the view over Falmouth’s harbor. In the cozy dining area, rattan chairs by Kouboo are drawn up to a round table from Serena and Lily under a pendant light by Regina Andrew—customized by Hansen with glints of gold. 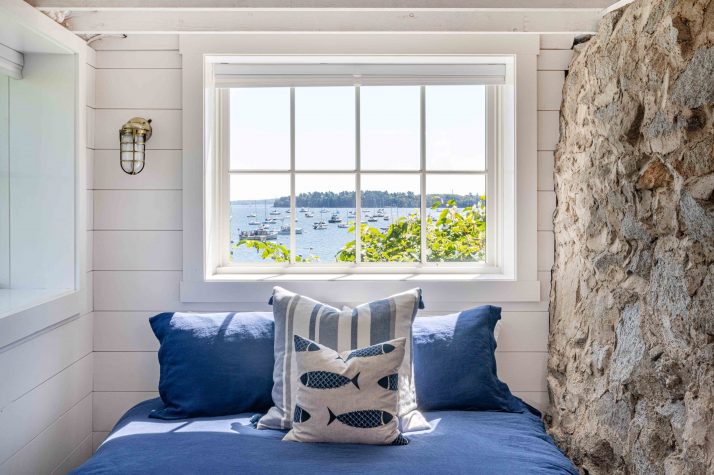 In the basement, the home’s granite foundation becomes a design element. Enclosing the space that had been under a porch made just enough space for a guest bedroom. 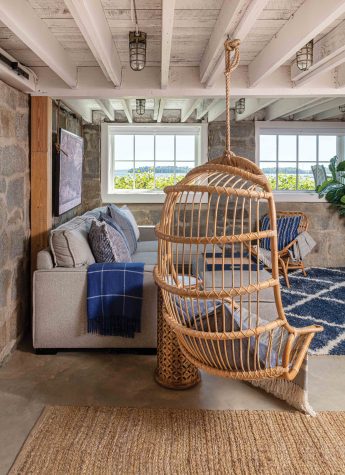 In the den, a hanging swing from Serena and Lily and a soft blue blanket from Brahms Mount create casual warmth. 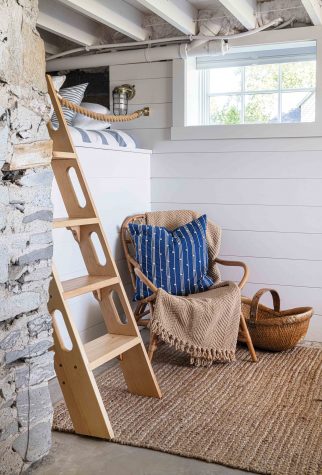 The basement’s guest bedroom—a favorite weekend hangout for Hamilton and her friends—features a bunk bed with a custom ladder made by Bruce Hamilton-Dick. 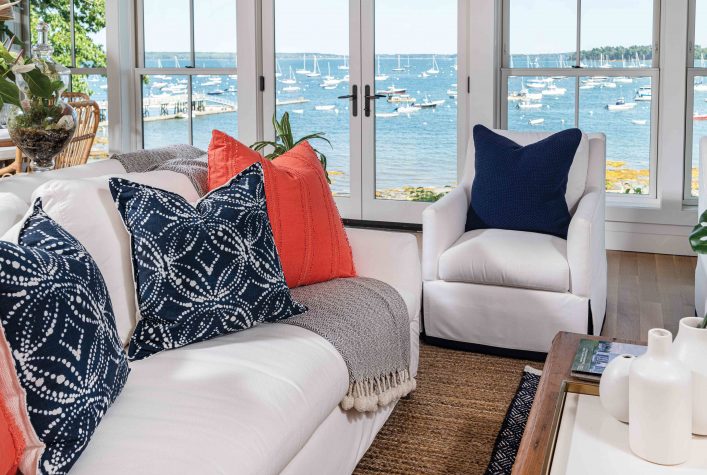 The living room has remarkable views of the water. 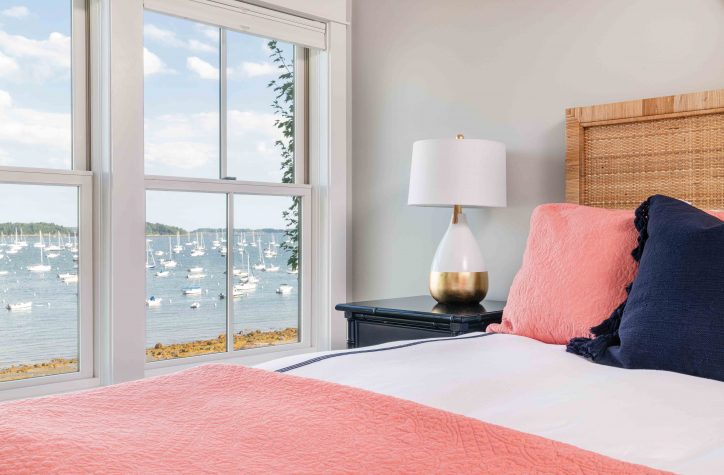 In the owners’ bedroom, coral and gold complement the home’s cool blues and whites.

Emily Hamilton grew up constantly in the midst of home renovations. Her mother, Carrie Hansen, has spent the past 20 years renovating historic homes for her own and others’ families. “So her entire life, I’ve been renovating. This has been her life,” says Hansen. “She’s very good at it and always has an opinion.” Since the age of 12, Hamilton has designed her own bedrooms—each one with a swing, and penny tile in the bath. When she was 16, she was ready for more. “‘We wanted a house we could collaborate on together,” says Hansen. “We were living in Portland at the time, and Emily was saying that she wanted to be closer to the water.” A home in Falmouth Foreside hit the market, but it took some vision to see its potential. Hamilton recalls her father’s response to the home: “This is just pieces of wood with a little bit of shingle on it.” The traditional Maine cottage had a great waterfront location, but its proportions were cramped. With the exception of an added bathroom, it had not changed since it was built in 1890. Hansen wasn’t deterred, though. “My mom is fantastic at what she does, so she said, ‘We can swing it,’” says Hamilton.

The first phase of the project, to make the home structurally sound and livable year-round, Hansen handled herself, working with an architect, a site engineer, and a team of contractors. “The whole front of the house is steel now,” she says. “It could withstand a tsunami”—as well as the more inevitable nor’easters. The basement sill was replaced, along with the roof, and interior walls were relocated. To create a sense of space and light in the small cottage, Hansen added large windows on the ocean side and raised the first-floor ceiling, deciding the loss of height on the second floor was worth it. She wanted to add more living space while keeping the same footprint and height, a puzzle solved by enclosing two porches and altering what had been a steeply pitched roofline. Much of the space gain came from making the daylight basement into a usable area, exposing previously buried parts of the original granite foundation in the process. Spray-foam insulation and Marvin windows took the home from a drafty cottage to a snug, efficient year-round home. “This was the first time I’ve installed heat pumps for heat and air,” says Hansen, “and I wasn’t sure it would be enough, so I put radiant heat in the bathrooms and electric baseboard in the bedroom. But we’ve never had to turn them on. You could heat this house with a match.”

Once the structural work was completed, Hamilton joined the project. “When the house started to look actually like a house and not a shack, that’s when I came in,” she says. She and her mother spent hours on their laptops comparing options for siding, flooring, fixtures, and furniture. Hansen’s style is rooted in traditional and historical looks, which often get mixed with coastal and modern aesthetics. Her daughter, she says, “tends to be pushing a little more toward the modern. This was the first house that I said, ‘Let’s go all coastal. Let’s just have fun with it.’” Hamilton’s influence is apparent in the home’s colors—or lack thereof. “I like a lot of color in my homes,” says Hansen. “She wanted white.” “Before it was painted, I would come here and do homework, sitting on the floor,” Hamilton recalls. “It was so bright—I didn’t want to do anything that would make it less bright.” Her mother took some convincing. “I acquiesced, but I really wasn’t sure. The painters were here, and they had the paint, and I still hesitated. But I love it. I can’t imagine it any other way.” Hamilton also had strong opinions about the flooring. “Wide-plank quarter-sawn oiled floors—that’s just what every 16-year-old is thinking, isn’t it?” jokes Hansen. “I like that she has strong taste, that she’s developing a sense of design, her own design.”

A dedicated preservationist, Hansen tried to keep the home’s original features in place as much as she could, despite the extensive renovation. Her design kept the front door, although she moved it to the rear of the home, while the fireplace remains in its original place, with a small wooden boat that was found upstairs displayed above it. “I’m always about recycle, reuse,” says Hansen. “I try to put as little into the dumpster as possible.” The interior doors got new paint and new locations but kept their original hardware, and Douglas fir from the original walls was turned into sliding barn doors. Elements that didn’t find a place in the renovation were saved for future projects, like the corbels from the orig-inal porch that have been crafted into shelves for a different home.

To create a consistent textural and color palette, Hansen and Hamilton added their own touches to furniture and fixtures. They customized standard vanities with new hardware, navy paint, and quartzite tops. To bring in weathered gray colors, Hansen refinished a reclaimed elm bench for the mudroom and an antique armoire in the owners’ bedroom. End tables and nightstands got new drawer pulls and new finishes, and gold paint let Hansen echo the brass hardware in some unexpected places, like the underside of the light fixture that hangs over the dining table. “Emily wanted to take my can of spray paint away from me,” she says. “This house is my little jewel box. I wanted brass accents all the way through.” Several of the light fixtures got the gold treatment, along with a brass chain in one case and a seagrass wrap in another. “I’m a firm believer that you don’t need to spend a lot of money on good design,” says Hansen. “On this house, I did a lot of DIY projects, because I wanted Emily to learn how to do those things. I wanted her to see that I could bring home a trunk covered in paint and end up with a beautiful piece.” (The antique trunk is now the focal point of the living area.)

For Hansen, the project was more than a successful home renovation. “It’s every moth-er’s dream, really, to spend that much time with her teenage daughter,” she says. “It was a great way for us to share something that we both love. I learned she’s very confident in her decisions. I’ve learned that this is what she wants to do.” Hamilton, too, took something important away from the work. “In doing all these DIY parts of the house,” she says, “I realized that I wanted to be a developer.” As a step toward that goal, she’s now planning on a prelaw curriculum at Tulane, where she’ll be a freshman next year. With a daughter on her way to her own career and a roster of renovations in front of her, Hansen says that the Falmouth Foreside house embodies the central principle of her approach. “The best design,” she says, “is to surround yourself with the things you love.” 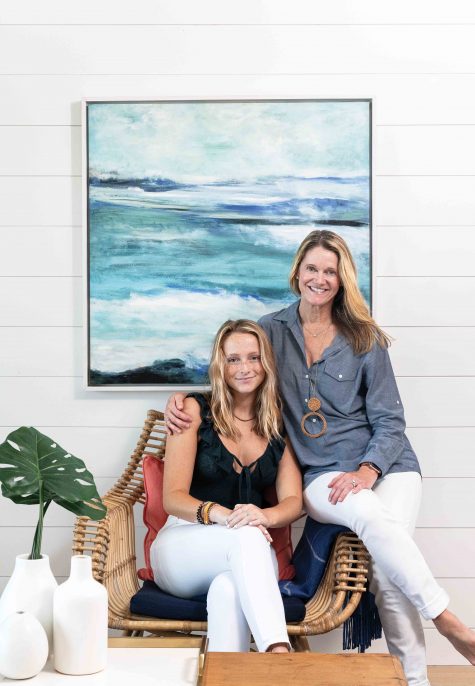 Carrie Hansen (at right), an experienced renovator of historic properties, worked with her daughter, Emily Hamilton (at left), to transform an 1890 cottage on Falmouth Foreside into a comfortable family home. 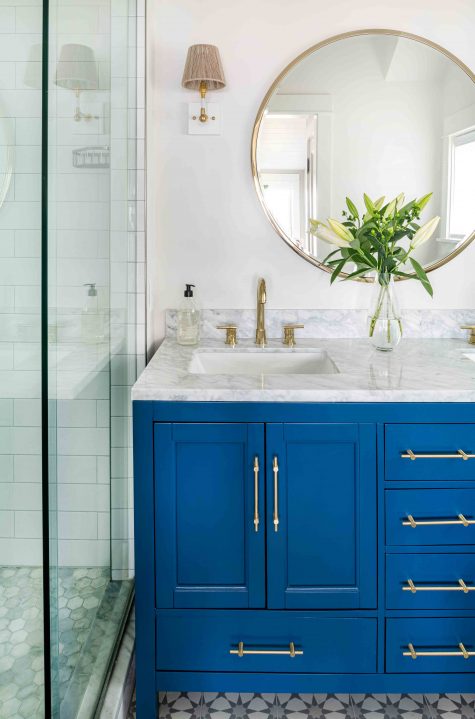 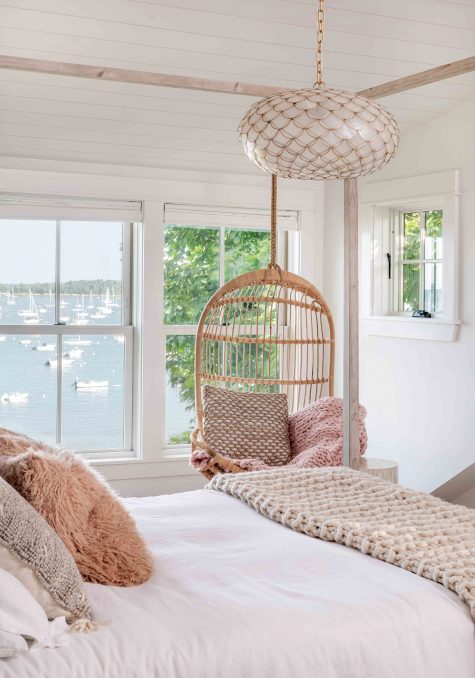 A soft color palette and a hanging chair from Serena and Lily decorate Emily's room.