Surrounded by gardens and perched on a ledge, this coastal home combines minimalism and modernism 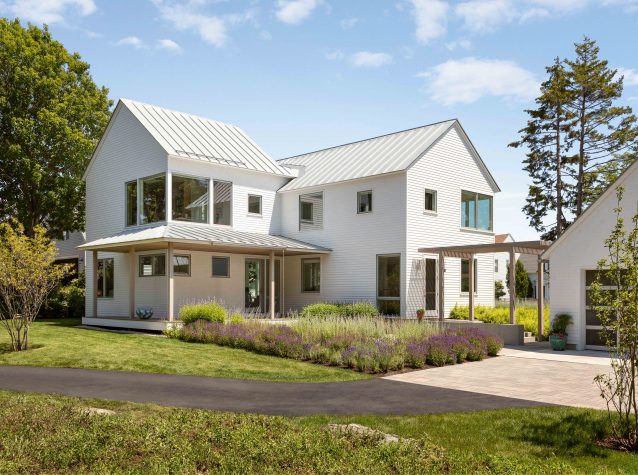 Architect Jessie Carroll describes the home as “a nod to farmhouse, with a more modern form.” The exterior features a combination of painted clapboards and shingles for texture. “They’re both coastally appropriate,” says Carroll. 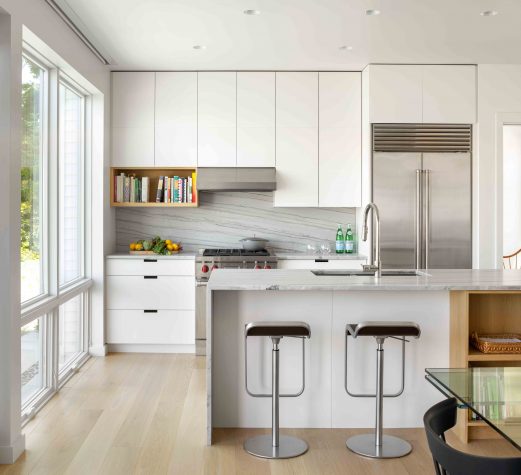 The bright white cabinets built by the Block Brothers Custom Cabinets showcase the team’s overall attention to detail. Designer Krista Stokes selected the finishes. “She really understood what we wanted,” says one of the homeowners. 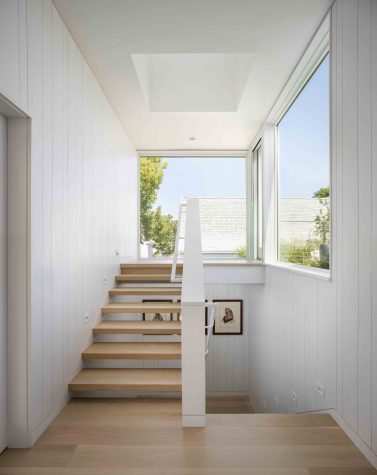 Floating stairs lead to a rooftop garden alive with plants. “We did a more traditional roofline everywhere except for the roofwalk,” says Carroll. “There, we created a more modern shape.” DeNiord explains that this space functions as a “prime sitting area, with views of the surf,” adding, “We added a succession of plants that would create texture and a rich palette.” 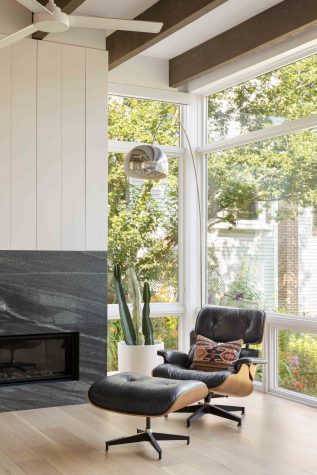 From his Eames chair, Harry can look out the back windows toward the Atlantic or through the front of the home toward the woods. “I can also feel the best breeze on the property,” he says. “That was important.” 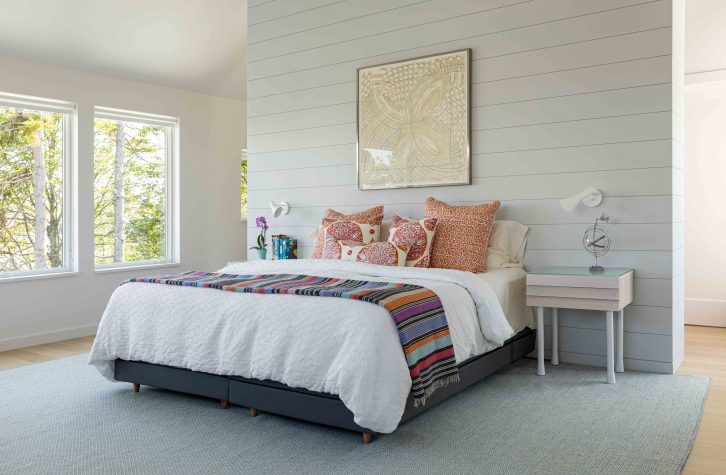 Throughout the house, Bowley Builders installed nickel-gap paneling, which echoes the straight lines of the exterior siding. In the bedroom, it serves as a soaring headboard. A proof from Frank Stella’s Polar Coordinates is hung above the bed; George Rickey’s kinetic sculpture Space Churn rests on the side table. Krista Stokes selected a mixture of modern and classic furniture for the couple. 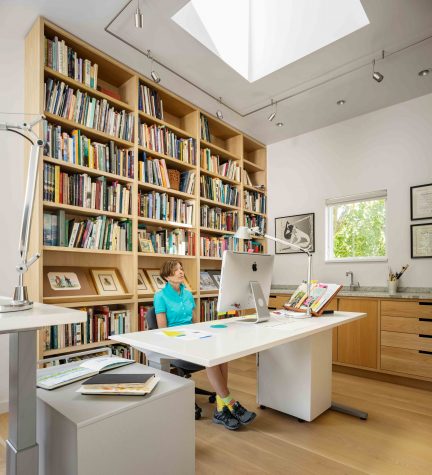 Frances’s upstairs work space is one part office (with plenty of shelves for her art books) and one part studio. This choice, Frances explains, is “less about taste and more about what I want to be doing for the rest of my life.” A Frank Stella lithograph, Valentine, hangs beside the window. 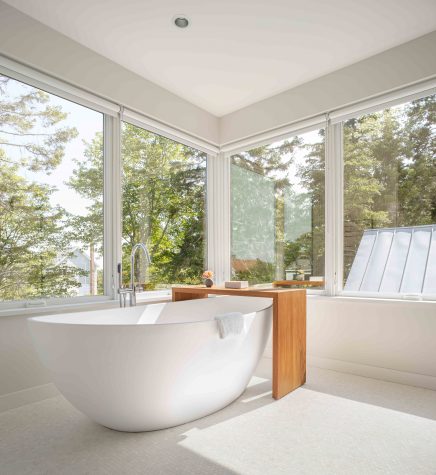 The owners’ suite bathroom looks out toward the woods. From here, Frances can step into the bedroom and see her favorite part of the house: her personal bookshelves. Built into the headboard behind the bed, the shelves are where she places her most precious books, including tomes on gardening, painting, and history. 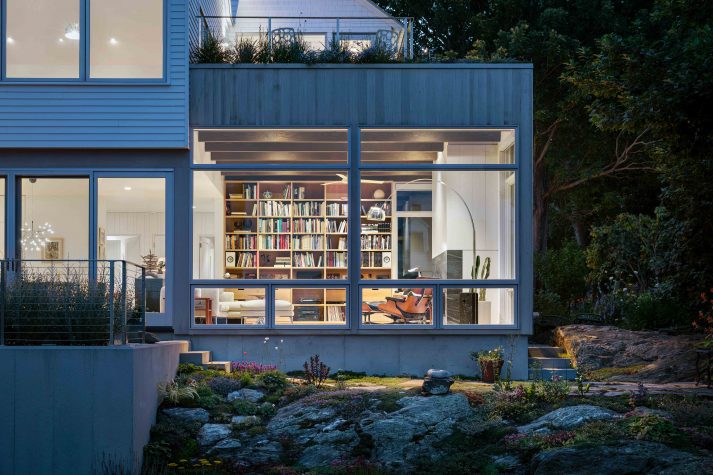 DeNiord took care to blend the cultivated with the wild. There are gardens throughout the green site, including a fern garden (one of Harry’s favorite parts of the property) and this rock garden where Frances likes to plant succulents. “The house is perched on top of a five-foot ledge outcropping,” explains deNiord. “We figured out how to traverse it by building in a series of bluestone steps.” For structure, he planted blueberries and grasses, and for color he put in a succession of annual blooms. All of the hardscape was done by Keith Stone, owner of Pinnacle Landscape and Design.

The house was just steps from the beach, but it didn’t have clear beach views. It was set back behind a few other cottages, but that didn’t quell the homeowners’ enthusiasm for their Atlantic retreat. Still, they knew it wasn’t perfect. An ideal house would let the ocean breezes flow in easily. It would allow them to sit out and look at the waves. It would bring them closer to the water—such a valuable thing, considering their primary residence was somewhere in the middle of the American West, surrounded by the Rockies with nary a sandy shore in sight.

So when Harry and Frances Hayes* decided to move to southern Maine full-time and make the cottage their primary residence, they also decided to do a bit of rejiggering. Actually, a lot of rejiggering. They tore down the tired log cabin and put up something new and modern, a house that would compactly fit all their needs, giving them space to make art, spots to feel the breeze, and even a place where they could watch the waves.

As a museum curator, Frances came to the design process with both a precise visual vocabulary and a truly impressive number of books. Harry, too, had his ideas about what the house should be. “When we initially interviewed with these two clients, the interesting thing was that they had different styles,” says Jessie Carroll of Whitten Architects, who designed their clever white clapboard home, which features familiar gabled forms in the front and a modernist glass rectangular living room toward the back. “He was hedging more on the California modern side, and she was leaning toward cottage vernacular.” The location also placed some limits on what Carroll could create: zoning laws required she “stick to certain roof pitches” and keep the square footage minimal. It also meant they couldn’t build a big deck. “But we could do a roof walk,” Carroll says. “That allowed us to get more water views. It’s in a dense village landscape, so having this outdoor space on the second floor allowed for greater indoor–outdoor living.”

The desire to be closer to nature was the greatest driving force behind the design, followed closely by a need for visual serenity and what Carroll calls “clarity in detail.” Reflecting on the build, she says that “working with Bowley Builders was critical. They take pride in their work, and that’s visible in the outcome.” When you have minimal trim, tight spaces, bright white walls, and lots of built-in storage, that attention to detail is absolutely crucial. “The house is wholly custom,” says Geoff Bowley. “The house was crafted uniquely for the site and the needs of the people who live there, and that’s the kind of work we like to do.” To aid in the process, they contracted Block Brothers Custom Cabinets of Northport to create the white, streamlined kitchen cabinetry, which features rectangular recessed pulls rather than hardware—another small detail that cuts down on visual clutter. “Plus, it’s easy to keep clean,” adds Frances.

Since the main goal of the project was to increase access to outdoor space, it only made sense to bring on a landscape designer in the early stages of design. Soren deNiord, too, nods to the zoning requirements as a big factor in his work on this site, which backs up against a forest preserve on one side and faces a dense coastal village on the other, with a steep grade change in between. “Zoning didn’t allow decks, so we made a living terrace on top of the ledge, which provided a neat opportunity to embrace the natural ledge in the concrete form,” he explains. The resulting space is a “real extension of the house’s living room at the ground level.”

The terrace and green roof aren’t just neat work-arounds—they’re truly interesting bits of hardscape gardening that, like the home itself, blends West Coast influences with an East Coast sensibility. As you walk around the land, the transition from house to terrace to garden to wild yard happens so gradually you don’t even notice the seams or edges. You just step, one space to another, on concrete, then bluestone, then green grass. You move from the hay-scented fern and Russian sage set in the terrace to the sedum and succulents of the rock garden. If you walk toward the woods, you’ll find yourself treading quietly into the woodland garden, which features shade perennials and ferns dug from the site and replanted after the build. Finally, at the edge of the yard, you arrive at an undulating border of red twig dogwood, beyond which lies a boggy garden of iris and native wildflowers. “We wanted to have a succession of blooms and texture throughout the season,” says deNiord. “Winter can be stark there.”

But it can also be beautiful. Even in the winter, Harry finds himself sitting in his Eames lounge chair, looking through the open-concept living area and past the kitchen, the laundry room, the pergola, and the garage windows to the woods. “I was just telling Jessie [Carroll] the other day how much I appreciate it,” says Harry, “that there is no line of sight that went unconsidered. Everything is planned.”

“We knew what we wanted, years ago,” adds Frances. “We had been brainstorming for a long time.” Harry says it “started with white and bright, then we wanted it to fit in with the neighborhood.” But what he really stressed was the significance of the ocean breeze. “We have a house in Colorado, and there it’s about seeing the mountain views,” Harry says. The Maine equivalent is that feeling of salt air on skin, the scent of brine, the blue fog so thick you can taste it. “I wanted Jessie to stay overnight in the old cabin because I wanted her to understand the air flow,” Harry says. “I wanted her to feel the breezes that moved through the property, to make sure the house would be open to them.”

Fortunately, “she got that right-on,” he concludes. The green roof, perched over a glass-fronted living area on the ocean-facing side of the home, is perfectly situated to capture the winds. That breezy living area is where Harry likes to spend most of his time. It’s also where he’s placed his desk. “I don’t need much space,” he says. “It’s my favorite part of the house—that, and my outdoor shower.”

As for Frances, her favorite part of the cottage is located upstairs, though she is loath to name just one space. “I love every room in the house,” she says. While she enjoys winter gardening in the laundry room at the big farmhouse sink (placed against a backdrop of William Morris wallpaper, chosen for the couple by Stokes), and she likes to paint in her studio (lined with floor-to-ceiling storage for her art tomes and art supplies), her favorite bit of the building is located behind her pillows. Rather than putting in a regular four-legged bed, Carroll envisioned a place where her clients could both rest and read; massive bookshelves were built into the opposite side of the nickel-gap wall that serves as their headboard. It creates a small, bright hallway between the spacious bathroom (with its deep white tub and wooden access bench) and the art-filled bedroom.

Perhaps that’s the final piece of the puzzle, the thing that makes this house truly special. Everywhere you turn, you’ll find books. Books and art. And books about art. There are floor-to-ceiling bookshelves in the living room and more of the same in Frances’s studio. But behind the bed, that’s where Frances stores her greatest treasures. “The shelves in our room are so exquisitely done, so that’s where I put all my favorite books,” she explains. “My most precious books, not in terms of value, but in terms of what I love.” On these shelves, you’ll find big thick hardcovers about gardening and painting, British history, and New England design. “Jessie made sure all my books would fit,” she says with a tone of slight awe. “Now, every morning, just about the first thing I see are those precious books, lodged in a setting as beautiful as they are.” 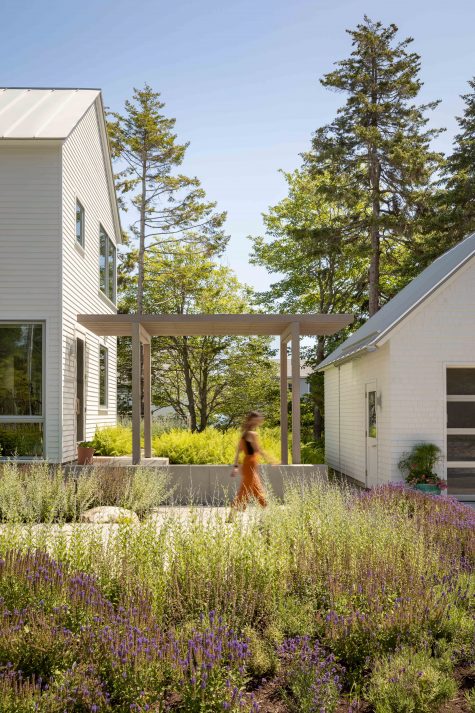 Designed by Whitten Architects, built by Bowley Builders, and finished with touches from interior designer Krista Stokes, this near-coast home combines California-inspired minimalism with Maine’s rugged elegance. The landscape design is by Soren deNiord and the installation is by Pinnacle Landscape and Design. 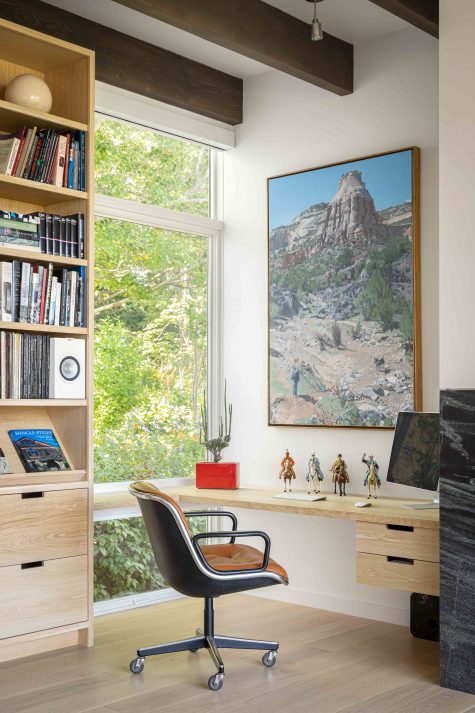 Custom-built bookshelves house Frances’s extensive collection of art history books and Harry’s collection of vinyl records. Harry received the vintage Hartland plastic figures of Tonto, the Lone Ranger, Davy Crockett, and Roy Rogers astride their favorite horses for Christmas in 1954. They are displayed on his desk beneath contemporary artist John "Hull’s Devil’s Canyon."