Rising high above Munjoy Hill, the maritime signal tower is the last of its kind 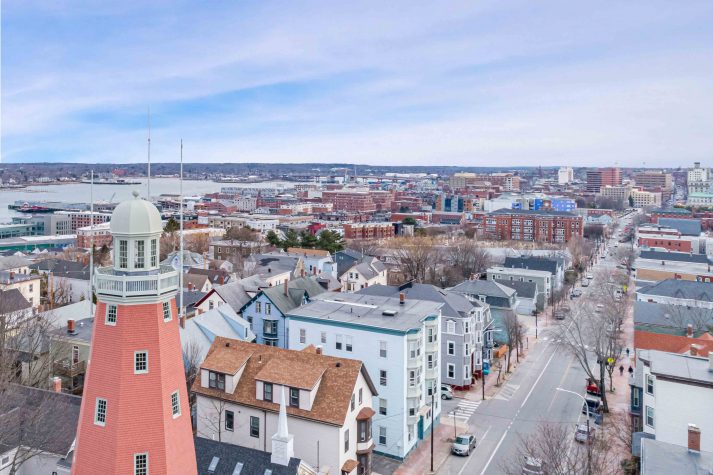 Looking through a powerful telescope from the top of the tower, Moody could see 20 miles out to sea, allowing him to spot sailing ships well before they entered the harbor. 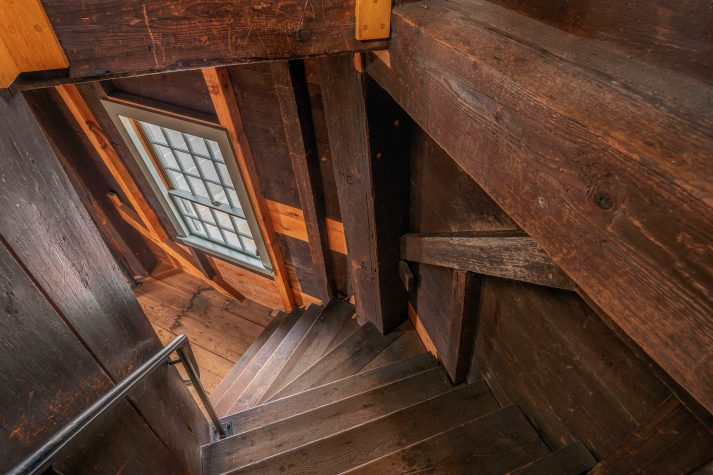 Some docents say the tower was really "just a fancy covered staircase." 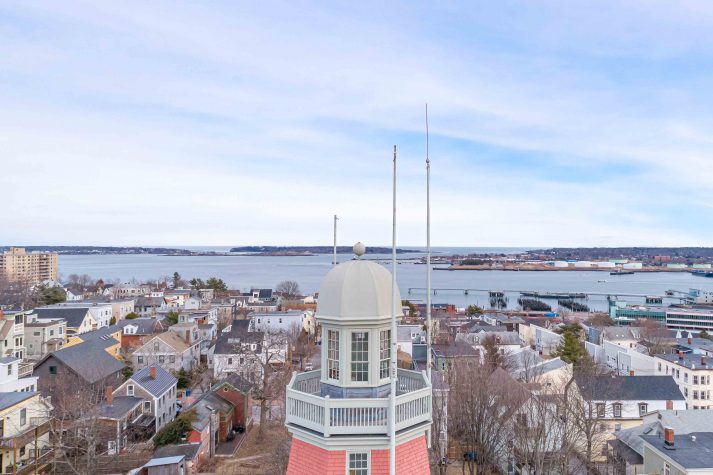 Signal flags were flown from the top of the tower to alert merchants and dock workers on the waterfront as to which sailing ship was coming in. 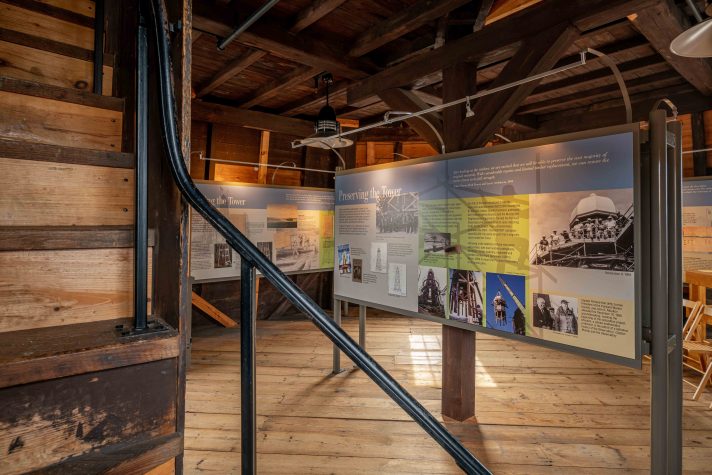 Interpretive panels on several of the tower’s six floors tell the story of its history and its relationship to the city.

From the top of the Portland Observatory, a vast eastward view sweeps past the mouth of Portland Harbor, the South Portland lighthouses, and Cushing Island to the open Atlantic. Minus the oil tanker docks and the modern buildings, it is much the same vista that Captain Lemuel Moody saw in 1807, when he had the 86-foot high, octagonal tower built in a cow pasture on the top of Munjoy Hill. Peering through a powerful, then-state-of-the-art telescope, Moody was able to see 20 miles out to sea, allowing him to spot sailing ships well before they could be seen from the ground, which, due to the position of the sheltered harbor, was only shortly before they arrived. Each shipping company had its own flags flying from the rigging, and as soon as Moody identified a ship, he would fly the same flags from the tower to alert merchants down on the docks about which ship was coming in. “It greatly increased the efficiency of the harbor,” says Alessa Wylie, the manager of education programs for Greater Portland Landmarks, which manages the observatory. “I like to say that by building the tower here and having a $500 telescope at the top, Captain Moody could see three hours into the future.”

Both a National Historic Landmark and a National Civil Engineering Landmark, the Portland Observatory is the only remaining maritime signal tower in the United States. Before two-way radios were invented in 1923, similar towers dotted the coastline, a practical although limited way to link ships to the shore. Vessel owners paid a fee (Moody charged $5 annually) to have their flags stored at the tower and flown as their ships approached port. Having retired to his native city following a 30-year career sailing up and down the East Coast, the entrepreneurial Moody had seen how such a structure could be advantageous to Portland. “In March of 1807 he decided the tower should be built, and he needed $5,000,” says Wylie. “By October of 1807, he had not only raised $5,000, but the place was already built and operational.”

The tower has six levels, topped by the observation space, called the lantern, which contained the telescope and is surrounded by a deck. Greater Portland Landmarks has installed informational panels on several of the levels, but in Moody’s day the spaces were probably empty. “There are some docents who think it was just a fancy covered staircase,” says Wylie. “He wanted to be able to get to the top to see the harbor.” Eight corner posts, each a single beam 65 feet, 4 inches tall, support the structure, which is 32 feet wide at the bottom and 8 feet wide at the top. The massive white pine timbers cost Moody $12 apiece and were floated from Windham down the Presumpscot River to Casco Bay. The lantern was constructed separately, and because it is so small, there was no room for a telescope on a stand. Instead, Moody hung the telescope upside down from the ceiling with a counterweight, so it could be rotated 360 degrees without taking up any floor space.

Painted brick red and rising high above the city, Moody’s tower quickly became an attraction for curious Portlanders. Recognizing another entrepreneurial opportunity, he began charging 12½ cents for a climb to the top, and eventually he built a dance hall, a banquet hall, and a bowling alley around the base. “I unofficially call it Moody Land,” says Wylie with a laugh. The captain, who lived with his wife and children close to the tower, also gave navigation lessons, took daily weather readings, and was an accomplished cartographer. Following Moody’s death in 1846, his son Enoch ran the tower and the amusements, but with the advent of radio communication eventually the observatory was no longer needed for sighting ships and fell into disrepair. In 1937 Enoch’s grandson Edward gave the tower to the City of Portland, and in 1939 a restoration project began, funded by a Works Progress Administration grant, part of President Franklin Roosevelt’s New Deal. The most significant element of this project was to install center posts running through the first four floors. “They also stained everything inside brown, so anything you see that is dark brown is either original or was added in the 1939 restoration,” says Wylie.

Any lighter-colored interior wood was added in a more substantial and recent restoration project. While the City of Portland still owns the property, in 1984 Greater Portland Landmarks took over management of the Portland Observatory; ten years later, it was discovered that powderpost beetles had infiltrated the structure to the point where it needed major repair. The tower was closed for a total of six years, four of which were spent raising nearly a million dollars in funding—an effort that included grants from the National Trust and the National Park Service as well as funds raised by local children who held a “jump-a-thon.” Contractors removed the lantern to assess the condition of the timber frame, anticipating that much of the structure would need to be dismantled and rebuilt. Ultimately, however, the tower was found to be in remarkably good shape, and only 20 percent of the original materials needed to be replaced.

The tower was reopened in 2000, and the public is welcome to visit between Memorial Day weekend and mid-October. A monument to the Golden Age of Sail and to the ingenuity of Captain Moody, the Portland Observatory is still a commanding presence, rising proudly above a city where old and new stand side by side and a harbor that still welcomes ships from across the bay and around the globe. 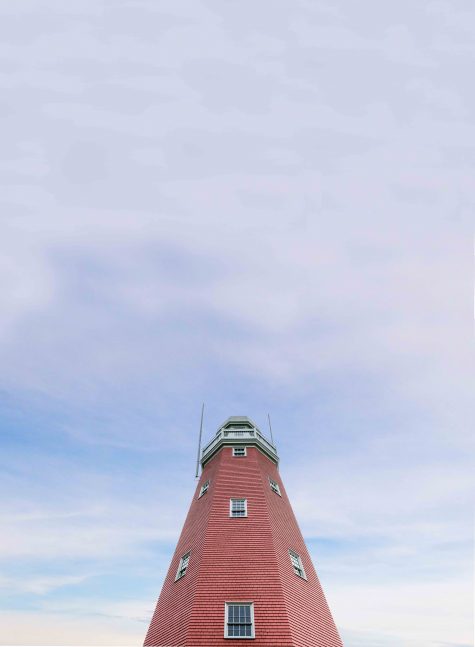 Built in 1807 by retired ship captain Lemuel Moody, the Portland Observatory is the last remaining maritime signal tower in the United States.