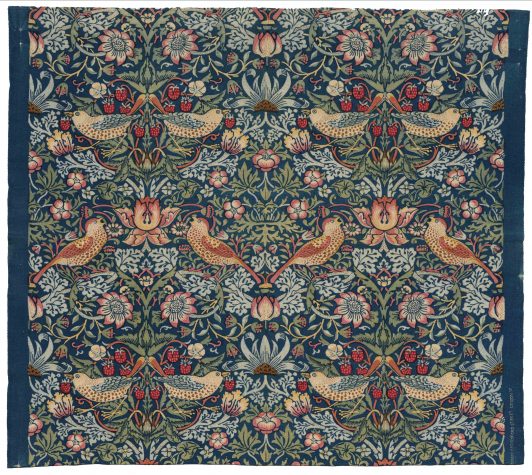 By 1880 British writer and designer William Morris’s internationally known and influential decorative arts and interior decorating firm Morris and Company was producing many products, including embroideries, tapestries, furniture, stained glass, wallpapers, printed and woven textiles, and rugs. In 1881 the company established its own textile printing and weaving establishment in order to retain full control over every aspect of production.

Perhaps the most popular textile design produced by the company is Strawberry Thief (1883). The main subjects in this repeating pattern are the thrushes (birds) that frequently stole the strawberries in the kitchen garden of Morris’s countryside home, Kelmscott Manor, in Oxfordshire. Morris’s love of indigenous, commonplace flowers, fruit, and fauna is evident in his early textile and wallpaper designs. He also drew on the Italian textiles of the fifteenth and sixteenth centuries that he studied at the South Kensington Museum (later the Victoria and Albert Museum) when designing this pattern. Strawberry Thief was a block-printed furnishing cotton made using natural dyes: alizarin (red), weld (yellow), and indigo. In a process known as discharge printing, the entire piece was first dyed in indigo. Then bleached blocks were applied and colors added in. It took several days to complete the complex printing process, thus making it one of the company’s most expensive furnishing cottons but also the most successful commercially. This printed cotton furnishing textile was intended to be used for curtains or draped around walls (a form of interior decoration advocated by Morris) or sewn into loose covers for furniture.

Morris’s writings on decorative arts, along with the work of art critic John Ruskin, created what is known today as the Arts and Crafts movement. The supporters of this design movement believed in honest construction and truth in materials (nothing was to be faked), joy in hand labor, equality of the fine and decorative arts (including folk arts), simpler ways of living, and socially responsible production. Morris famously declared in 1882 that one should have nothing in one’s home “that is not known to be useful or believed to be beautiful.”

To this day, Morris’s patterns are popular in households all over the world.