An educator turned craftswoman marries her love for precision with her passion for artistry. 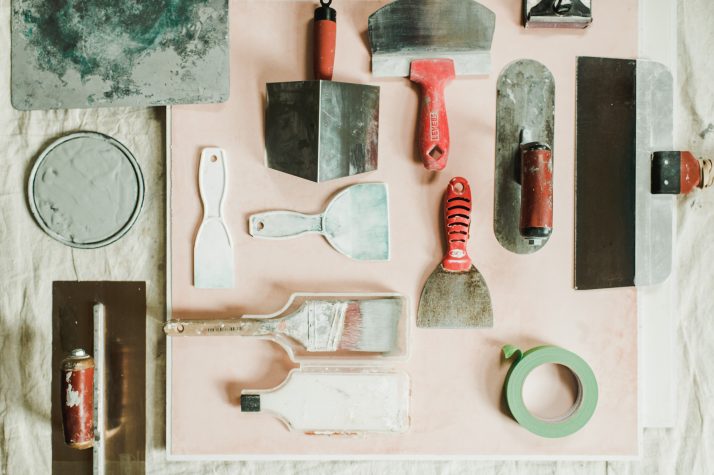 A few of Norod’s tools: a plaster hawk (at top left) and trowel (at bottom left) along with a corner tool, bucket scoop, spatulas, spackle knife, and paintbrush; below the tools is a sample of Marmorino lime plaster in the color Amalfi. 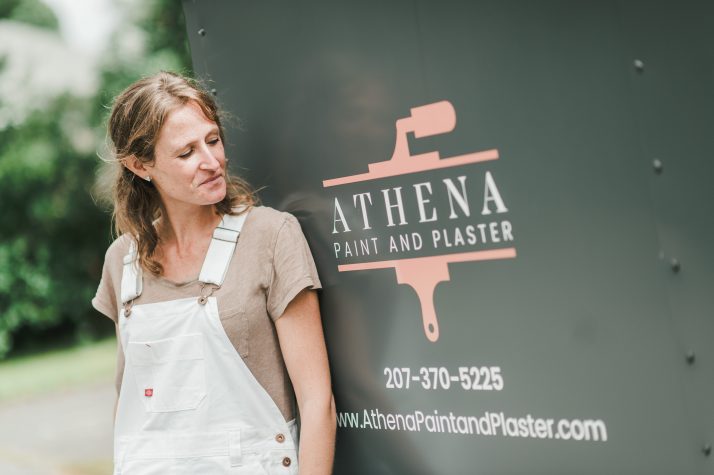 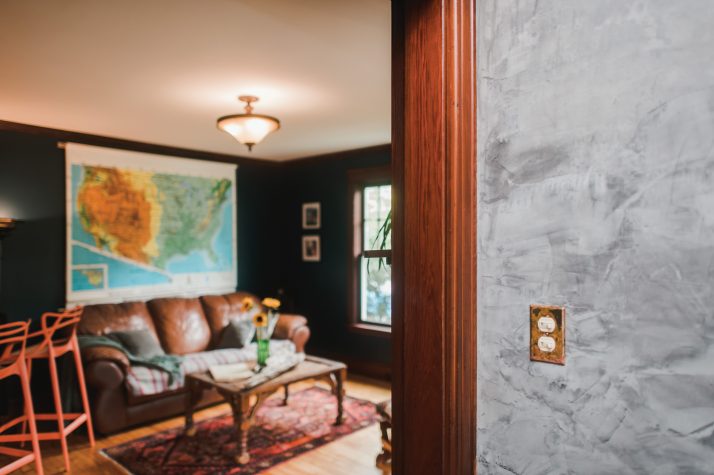 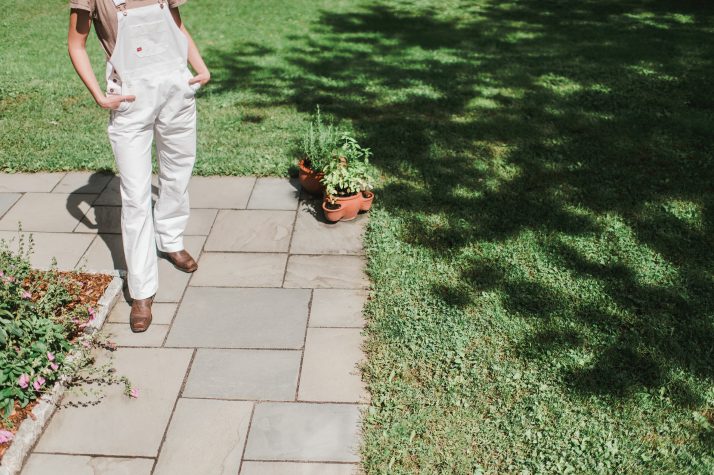 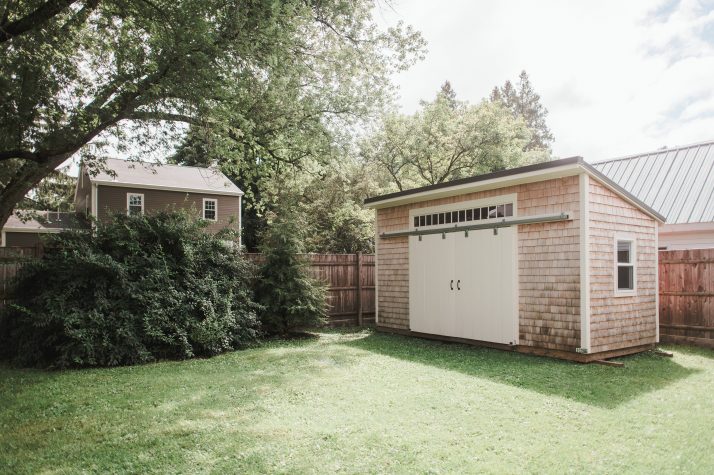 Norod designed this backyard shed around an antique transom window she found on Craigslist. It was her first time building a structure like this, but Norod had confidence in her skills (and her problem-solving capabilities).

When people hear that Courtney Norod is a painter, most of them assume she means fine art or perhaps murals for kids’ bedrooms or faux finishes—something of that type. They don’t expect her to be a housepainter. “It’s a very male-dominated field,” she says. We’re sitting on the porch of her Portland home, overlooking a blooming garden filled with cheerful black-eyed Susans and drinking coffee. I have to admit, Norod isn’t who I would expect to show up for a painting job. She doesn’t realize she’s speaking for me when she says: “Most people think it’s pretty cool.”

Norod has owned and run her own house painting business, Athena Paint and Plaster, for several years now. The last part of the business—the plastering part—is a newer addition. Norod is a self-taught plasterer, although when she first set out to learn, she did try calling up an established New England plasterer to see if he had wisdom to impart. “He told me, in so many words, that it wasn’t a job women could do,” she recalls. “He kept saying that the job was too physical. He’d never seen a woman do it before.”

It is physically challenging work, but that doesn’t bother her. “I would rather be working with my hands than sitting at a desk all day,” she says. Before the pandemic hit, she had a full-time job in special education. This meant her projects were limited to summer vacation. And Norod has always had a lot of projects, ever since she was a kid. “Growing up, my dad did all kinds of DIY projects. He fixed cars, figured out electrical issues, built things around the house. His attitude was that you could learn to do most things yourself,” she says. An engineer, he represented “left brain” problem solving to Norod, while her “wildly creative” mother represented the “right brain.” “It’s not a straight path I learned from them,” she says. “But I had models for how you can figure it out yourself and how you can make something beautiful.”

After her parents separated, Norod and her brother helped their mom restore a 1740s stone farmhouse in Pennsylvania. “That was a turning point for me,” she says. “I was applying a lot of things I had learned in new ways.” Although she loved working on houses, she ended up going to college to study education. “If I could do it all again, I’d probably be a carpenter,” she reflects now. She doesn’t regret her two master’s degrees, exactly, because she does love to learn. “It’s my absolute favorite thing.” Work in schools took her north to Maine, where she gradually began to realize her passion. In 2015 Norod got married and bought a house in Portland. “It was a big year for me,” she says. “Our wedding registry was full of all kinds of power tools.”

For a bit, she was happy spending weekends and summers helping friends DIY their home projects and restoring her 1916 Craftsman bungalow. She built a shed behind the house, installed a flagstone patio and path, plastered the foyer, and painted everything, inside and out. She was helping a friend with their house painting when a light bulb went off in her brain. “Another turning point,” she says. “I realized I could do this for other people.” In 2017 she registered her business and began charging for her labor. Norod chose the name Athena, she explains, because of the Greek deity’s associations with traditionally masculine fields. “She’s the goddess of war, wisdom, and handicraft. What a badass lady!”

Norod dove into her handicraft work fulltime after schools shut down in 2020 due to the pandemic. Although she hopes to work with more interior designers in the future—she names that as her first goal for the next year—Norod is currently booked for months out. Her customers come to her organically. “It’s spread by word of mouth,” she says. “I think people appreciate that I’m very clear about my rates and I’m very communicative.” She isn’t the cheapest option, but Norod is thorough and detail oriented. She doesn’t even listen to music when she paints because, she says, “I like to focus on each brushstroke. People often forget I’m there when I’m working. I come with my artist’s brushes and headlamp and quietly get to work.”

In contrast to painting, which feels very precise and “left brained” to Norod, plastering is her artistic outlet. “It’s more free-form and artistic. Even though it’s the same process as the ancient Egyptians and Romans used, it’s limitless in terms of how it looks. It’s so stunning when the light hits it,” she says. She shows me pictures of a recently completed plaster backsplash in a deep Prussian blue. It’s lovely, and something I never considered doing in a kitchen. Yet plaster is perfect for that space, Norod explains, because of its antimicrobial properties. Made from water, lime, and marble dust, plaster can improve the air quality of a space. It doesn’t allow mold to grow. You can seal it, and you can waterproof it. “It’s always unique,” she adds.

For Norod, plastering is just the next logical step in her project-driven life. She’s always admired quality building, and she is thrilled to be able to contribute to this field. “I’m excited to carry a tradition forward, especially one that is not as common as it once was,” she says. Plus, it allows her to spend time in spaces with rich history, adding her own layer of color and texture to their walls. Old homes speak to her, sometimes literally. “I love going into a restoration job and finding signatures of the people who worked on it,” she says. “I feel like an archeologist unearthing details of the past.” Her labor is a form of tribute: “I like honoring the old craftsmanship and all the people who worked on a home.” 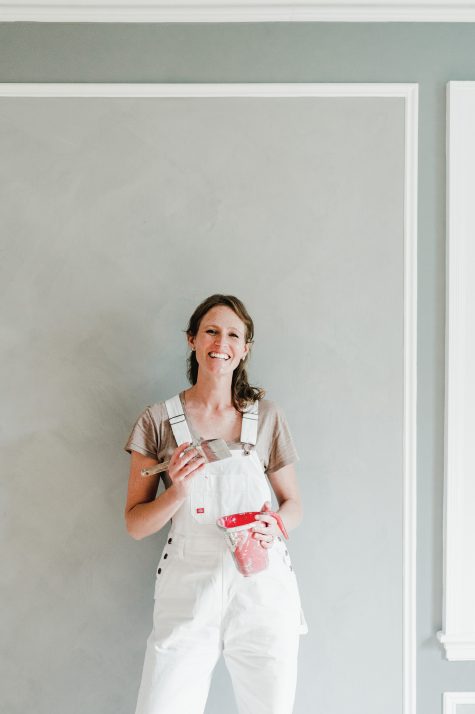 Courtney Norod stands inside a 1920s mansion in South Portland, which she’s currently helping restore to its former glory. She’s used Sherwin-Williams’s Snowbound on the trim and lime paint finish from Vasari Lime Plaster and Paint in Cement Grey. 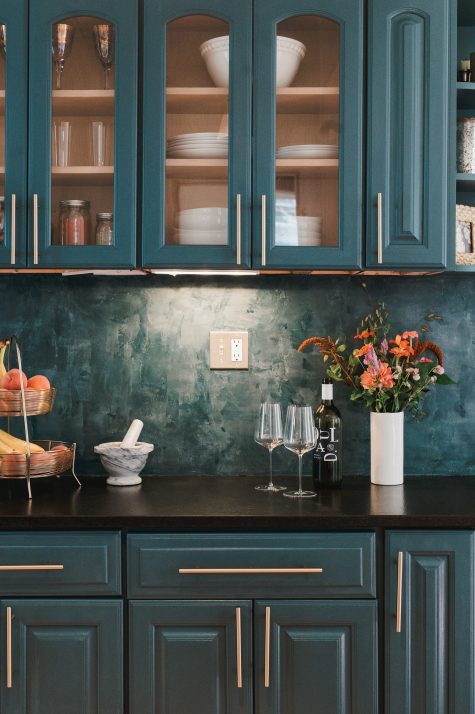 Kitchen cabinets in Benjamin Moore’s Newburg Green are paired with a custom plaster backsplash that Norod tinted with the same paint; she applied a Veneziano lime plaster directly to the backsplash tiles. 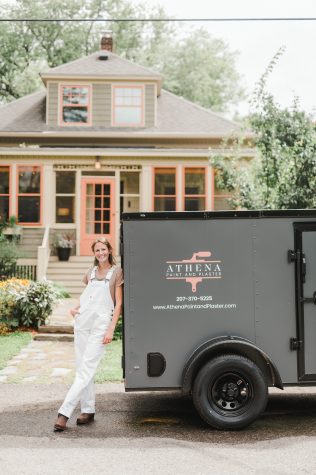 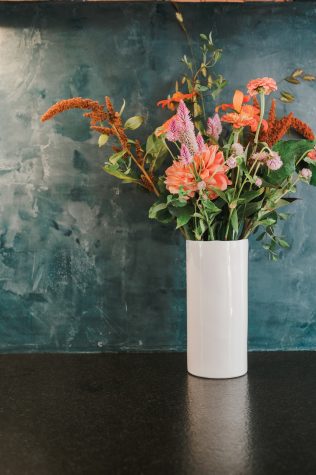 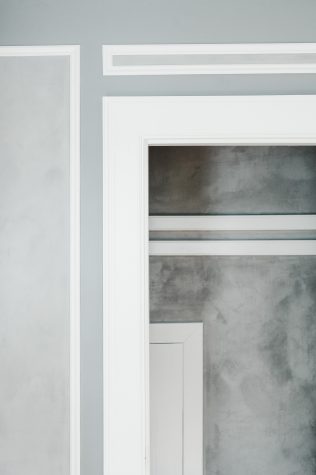 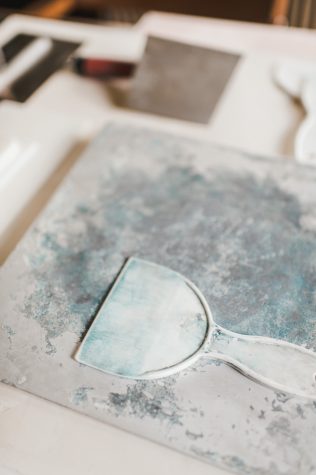 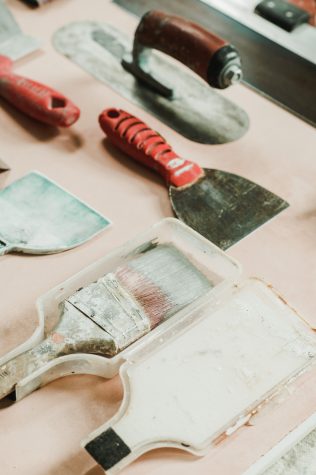 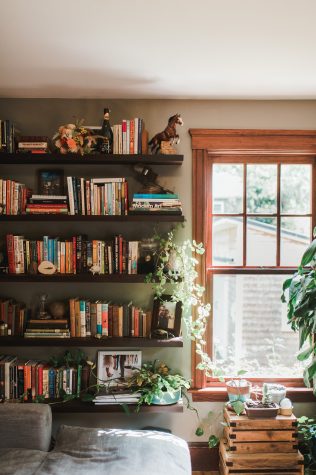 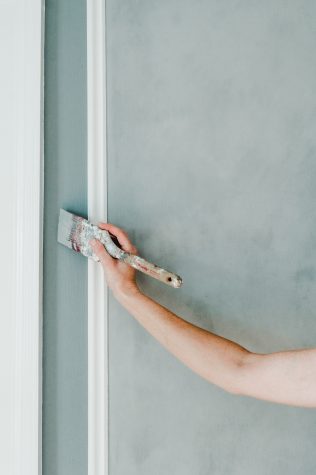 Norod at work, using Sherwin-Williams Snowbound with a lime paint finish from Vasari Lime and Plaster Paint in Cement Gray . 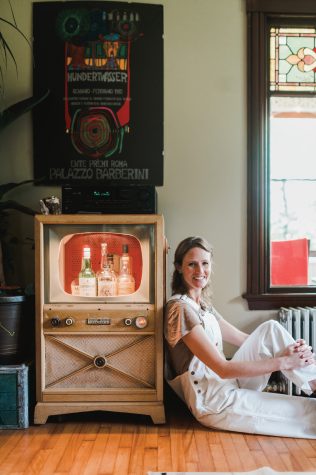 Lounging in her eclectic and inspired home, the painter calls this her “Whiskey TV,” which she built from a vintage television set.