Architectural and cultural history at the Poland Spring Resort. 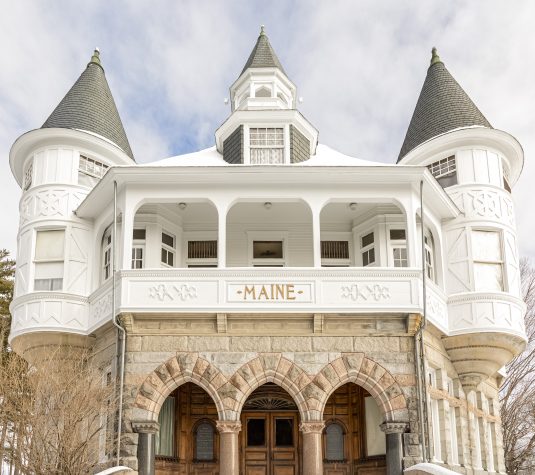 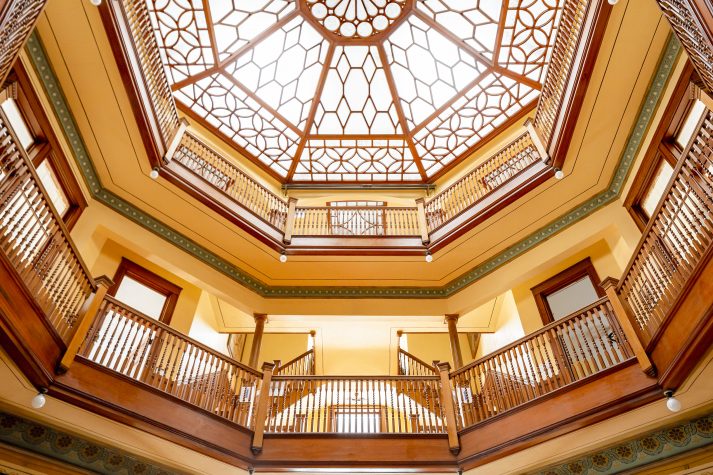 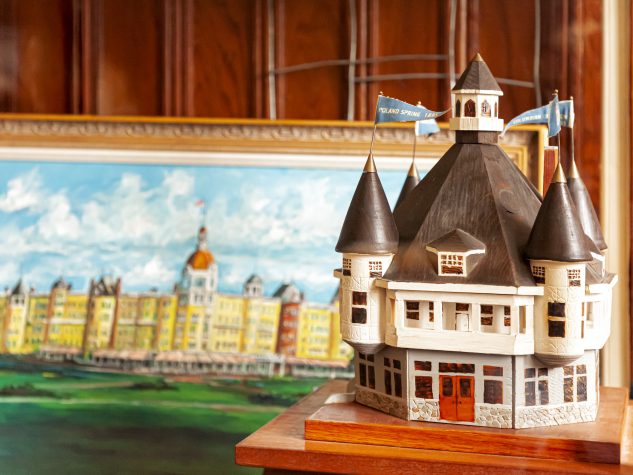 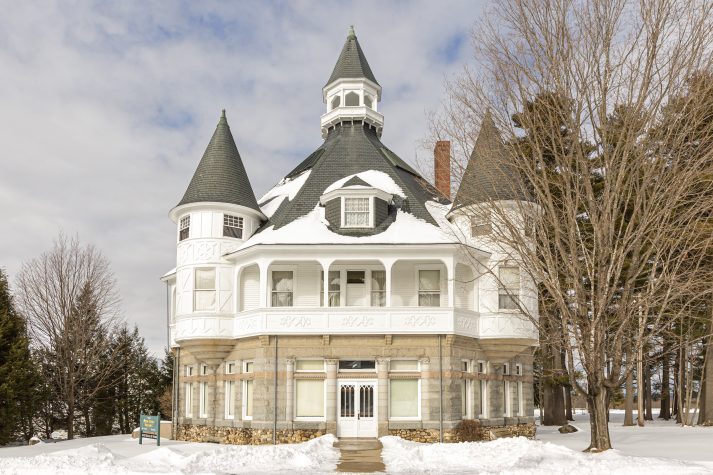 Now owned by the Poland Spring Preservation Society, the Maine State Building is open to visitors from May to October. 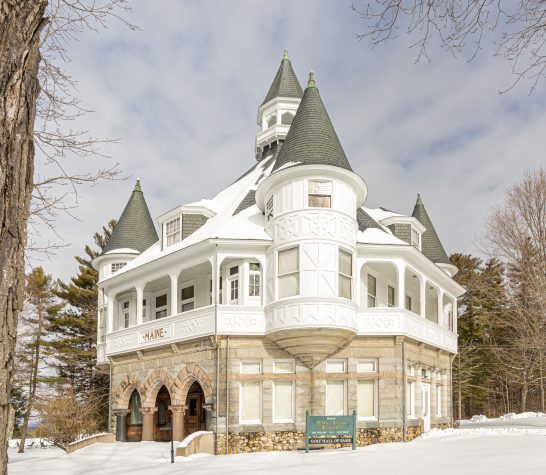 The Maine State Building was designed for the 1893 World’s Fair in Chicago by Lewiston native Charles Sumner Frost. It showcases Maine materials, including cobblestones for the foundation, pink and gray granite for the portico and the first level, and slate for the roof. Following the fair it was dismantled and moved by train to Poland Spring Resort, where it was rebuilt. Of the 200 buildings constructed specifically for the World’s Fair, it is one of only three that still exist.

In the summer of 1893 the World’s Columbian Exhibition (or World’s Fair) in Chicago catapulted a number of brand names into their places in history. Pabst Best Select, which battled Budweiser for the fair’s best beer award, updated its can design and adopted a new name: Pabst Blue Ribbon. George Washington Gale Ferris Jr. introduced his namesake wheel. Wrigley’s Juicy Fruit Gum and Cream of Wheat made their debuts. And Poland Spring Water won a Medal of Excellence, helping to launch the Maine icon as an international brand.

Poland Spring Water was of course among the Maine products on display in the Maine State Building, one of 200 buildings constructed specifically for the World’s Fair and one of only three that survive. Its architect was Lewiston native Charles Sumner Frost, a graduate of the Massachusetts Institute of Technology who achieved national recognition for his work in Chicago. Frost designed an octagonal, Queen Anne– style building that showcases Maine materials in its construction, including pink and gray granite—in both rough blocks and polished columns—from several quarries, elaborately detailed oak paneling, and a slate roof. The base of the building is made of cobblestones, and each corner has a projecting turret.

Among the millions of people who attended the World’s Fair in the summer of 1893 was Hiram W. Ricker, who owned Poland Spring and its namesake resort along with his brothers, Edward and Alvan. When the fair closed that October, Ricker learned that the Maine State Building was due to be demolished, so he purchased it for $30,000. He sent the resort’s head of maintenance, Horace Walker, and a crew to Chicago. “They had to get there quickly and disassemble the building, because the railroad tracks going into the fairgrounds were going to be removed,” says Cyndi Robbins, current owner of the resort. “They took it apart, put the pieces on 16 railroad cars, and brought it to Danville Junction in Auburn. It was hauled by teams of oxen to Poland Spring.” Reconstructed in a grove of trees next to the 350-room Poland Spring House hotel, the fanciful and imposing building was reconfigured to house a library on the first floor, rooms for visiting artists on the second, and art gallery space on the third, providing “an additional attraction to this famous watering place of the turn-of-the-century leisure class,” according to the application for the building’s inclusion on the National Historic Register (it was added in 1974).

The Ricker brothers were descendants of Jabez Ricker, who in 1794 acquired the property that would become Poland Spring Resort in a barter deal with the local Shaker community. The Ricker family started a farm on the gently sloping hill, but “because they were on the main thoroughfare between Portland and Quebec, and theirs was the first property after going through Shaker land, they found themselves in the country inn business,” says Robbins. When Poland Springs celebrated its centennial in 1895, the 1,000-acre resort could accommodate 500 guests in two hotels, and included stables for 50 horses plus rooms for the coachmen, boarding houses for staff, a cooperage and a blacksmith shop, and a pumping station for bringing water from the property’s lakes to the hotels.

On July 1, 1895, the Poland Springs centennial celebration included the dedication of the Maine State Building. According to the souvenir booklet from the centennial, the octagonal first floor was largely dedicated to photos and memorabilia from the World’s Fair, “which will increase in interest as time goes on and the great fair becomes more remote.” The rooms opening off the central rotunda, which had been used for reception spaces and offices during the fair, were refashioned into two comfortable reading and writing rooms—one for women and one for men. From the third-floor art gallery, “the cupola of the central tower, eighty-six feet above the entrance floor, commanding lovely views on either side, is reached by a stairway winding above the great skylight, with its thousand feet of glass.”

In the 126 years since the souvenir booklet was published, Poland Spring Resort has been through multiple changes. The Ricker family eventually lost the land and both their hospitality and water businesses to the banks during the Great Depression. In the mid-1960s, the Job Corps—a program of the Johnson administration—rented many of the buildings to use as a training center for women. The grand Poland Spring House, which was empty, burned down in 1975. In 1977 then-owner Saul Feldman and Robbins’s husband, Mel, who was leasing the property, donated the Maine State Building and the All Souls Chapel to the newly formed Poland Spring Preservation Society (PSPS). The Robbinses purchased the resort in 1982. It now comprises three inns, cottages, and an 18-hole golf course (the oldest resort golf course in the country), all set on 500 acres.

Today, the Maine State Building serves as a museum chronicling the history of the Poland Springs Resort, and is open from May to October. Individual rooms house exhibits dedicated to the elegant food service, the history of the Ricker family, the water company, and the World’s Fair. A space on the second floor houses the Maine Golf Hall of Fame, complete with George H.W. Bush’s golf bag. Many of the furnishings that were removed over the years have been donated back, including a leather sofa that was located at Poland High School. The PSPS has recently restored the porches and will soon embark on a $300,000 capital campaign to replace the roof with slate tiles from Monson Slate.

The distinctive building is also a monument to a defining period in American architecture. The Chicago World’s Fair inspired a renewed interest in classical design, prompted the City Beautiful movement, and introduced the idea that cities could be planned. Commemorating Christopher Columbus’s voyage to North America (a year after the 400th anniversary), the fair was designed by Fredrick Law Olmsted to resemble a grand seascape, with canals and pools winding through the massive exposition buildings on the south shore of Lake Michigan. Chief architect Daniel H. Burnham assembled a team of notable architects and artists to contribute, including Charles McKim, Richard Morris Hunt, and Henry Van Brunt, sculptor Augustus SaintGaudens, and painter Mary Cassatt. The gleaming, white stucco facades and porticoes of the buildings— nicknamed the “White City”—had a profound impact on the design of public spaces and buildings around the country. Portland’s Masonic Temple, the Bangor Public Library, and Bath City Hall are just a few local examples. Thanks to the Ricker brothers’ foresight, the Maine State Building survives as a reminder of a time when electricity was new, a giant wheel first carried adventurers into the sky, and America was on top of the world. 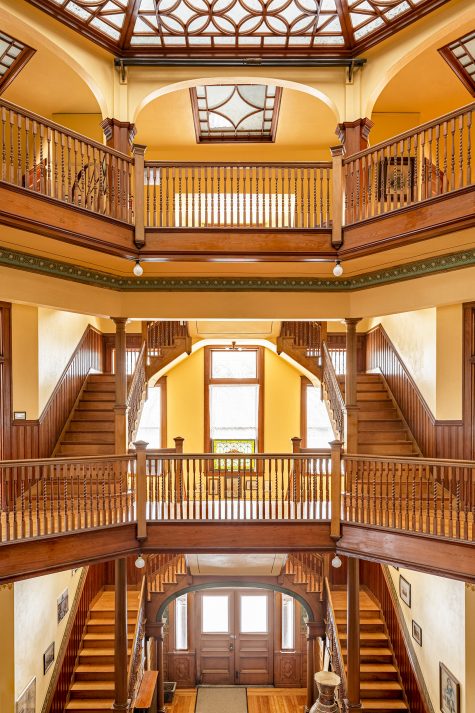 The octagonal central tower echoes the shape of the building’s exterior. The second floor was used at the World’s Fair for displays about Maine, and now it houses exhibits that chronicle the history of the Poland Spring Resort, as well as the Maine Golf Hall of Fame. The third floor has been an art gallery since the building was reconstructed. 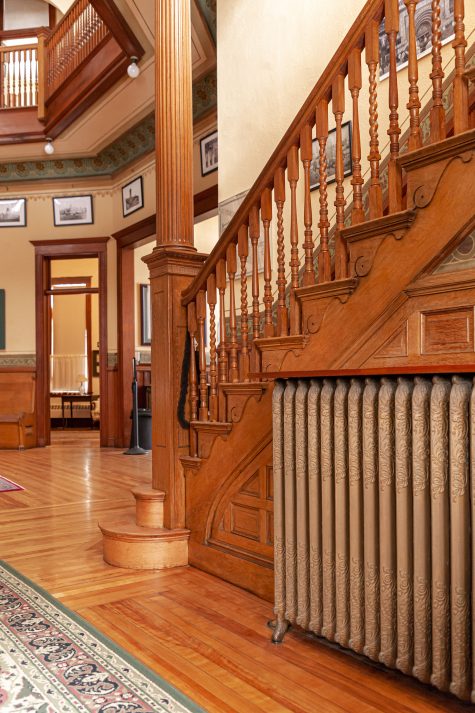 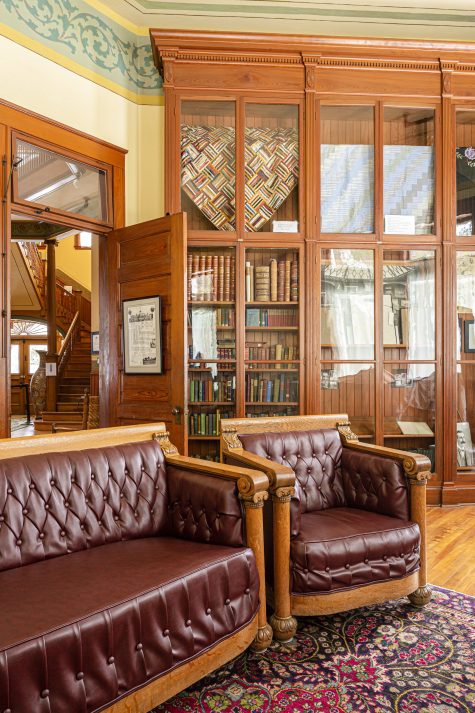 Original furniture, such as this sofa and chair in the library, has been found in the community and donated to or purchased by the resort. 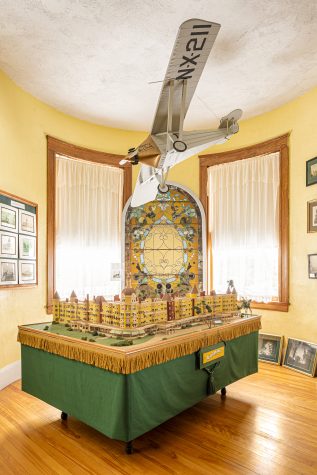 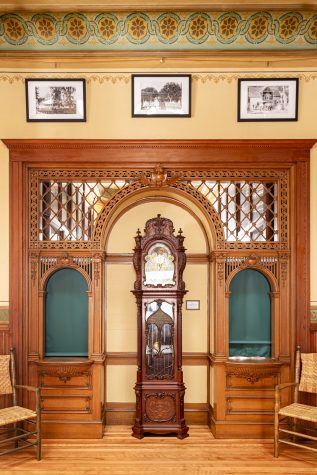 The grandfather clock came from the home of the previous Poland Springs Resort owner, Saul Feldman. Flanking it are windows once used for resort guests to request books from the library housed on the first floor. 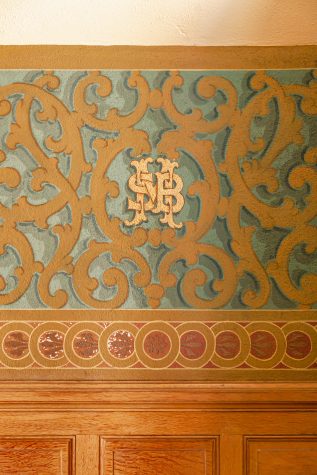 The elaborately stenciled friezes are original and exemplify the Beaux-Arts style. 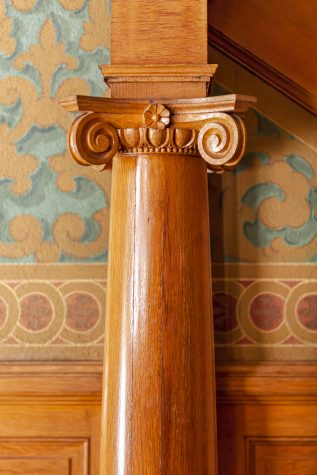 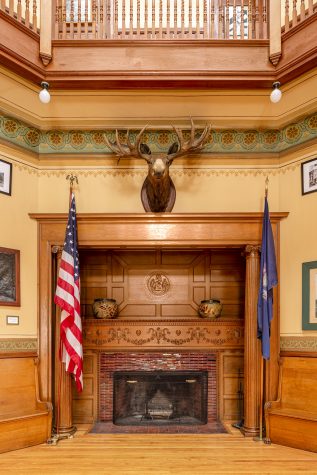 This ground-floor fireplace features a mantel of quarter-sawn oak, which, like all the wood in the building, came from Maine. 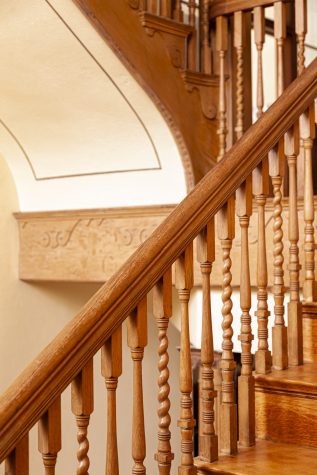 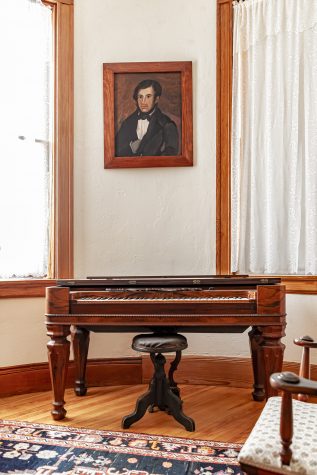 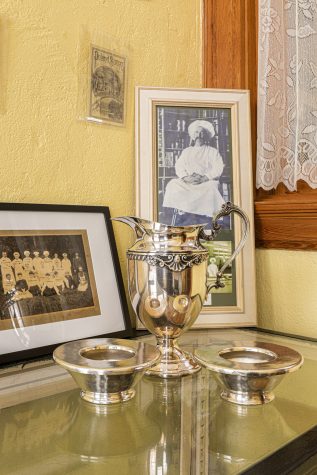 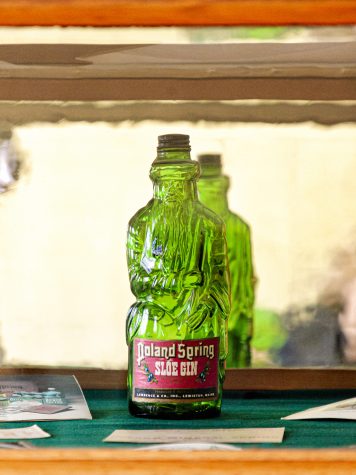 Many varieties of Moses bottles were created for Poland Spring, often to commemorate a special event.