Of Cigars and Stars 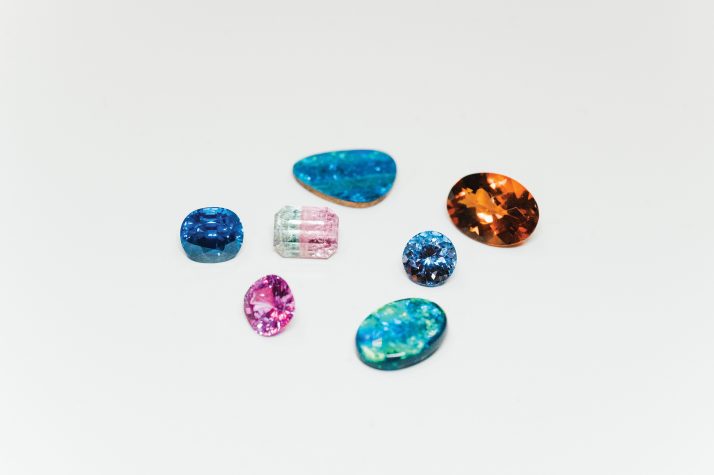 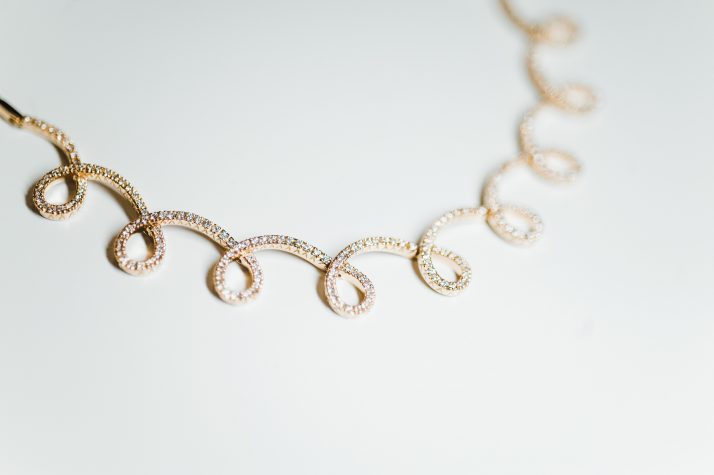 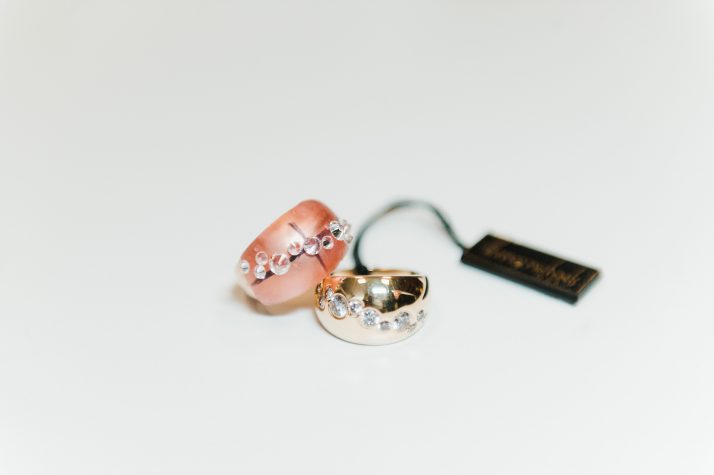 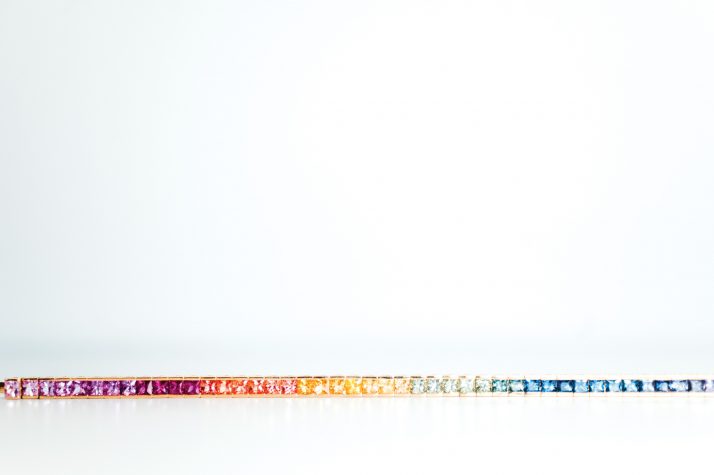 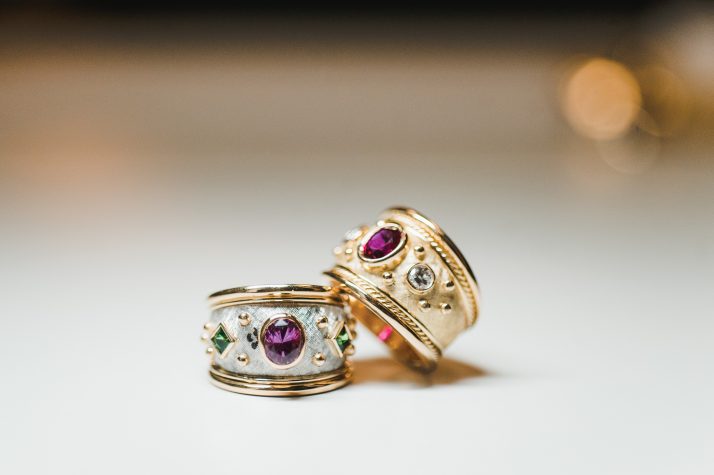 A pair of cigar bands inspired by Byzantine designs and manufactured by Michaels in his Camden workshop. Since the 1970s, the couple has worked exclusively in 14KT gold, 18KT gold, and platinum. 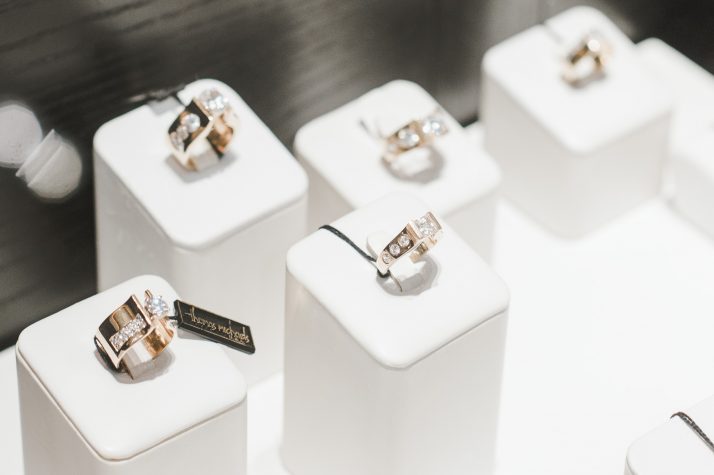 Diamond rings are always in demand. Michaels calls the stone a “phenomenal gift from nature.“ 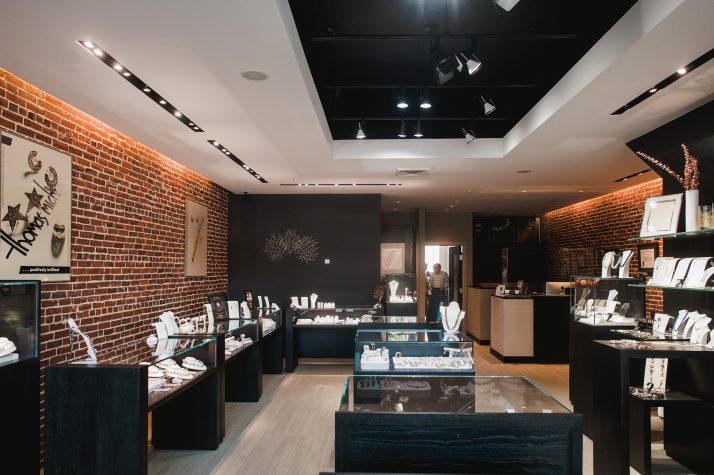 In addition to working with metal and stone, Hattman-Michaels also works with glass. The sculpture on the far wall is one of her more recent pieces. 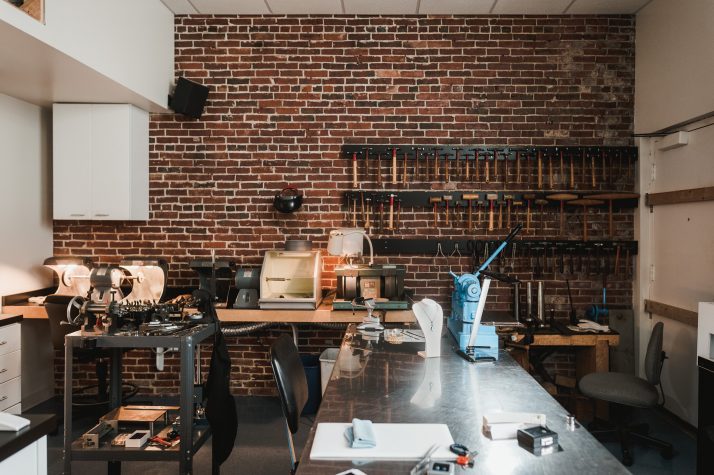 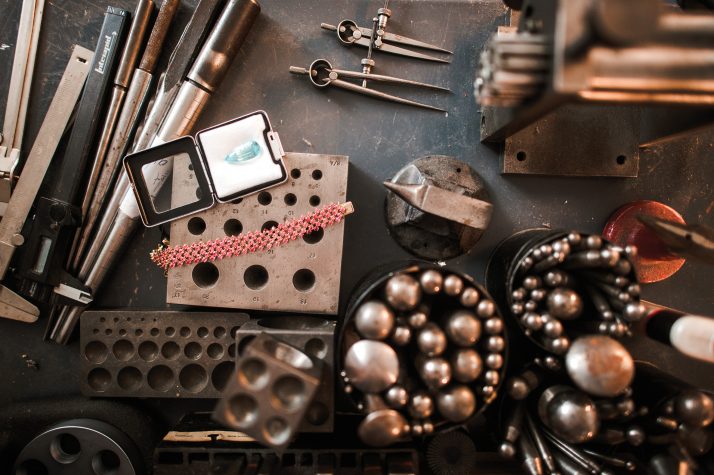 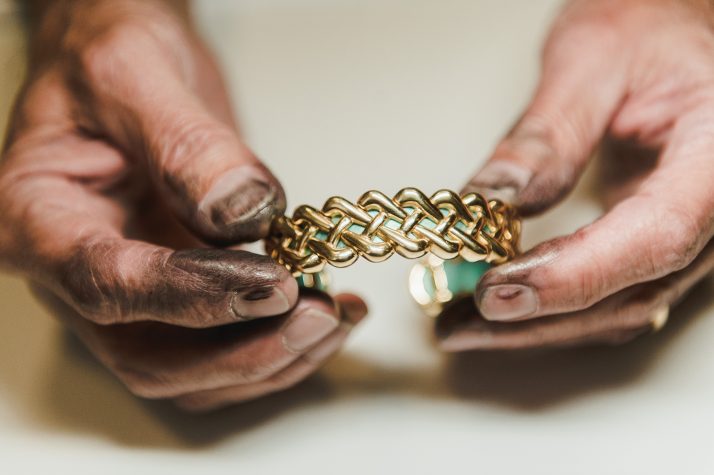 Thomas Michaels and his wife, Nora Hattman-Michaels, are showing me some of their work. On the velvet trays in front of me lie hundreds of thousands of dollars’ worth of jewelry. Michaels picks up a diamond ring for me to examine, and I slip it onto my finger. The jewel is perfectly shaped and set. Refracted light dances through the depths of the stone, but lovely as it is, I’ve seen rings like this before. I haven’t seen anything quite like the next example. It’s a thick, gold cigar ring featuring a central Burmese ruby flanked by diamonds. Michaels describes the hours of labor that went into the creation of this piece, which looks like something rescued from a Genoese pirate’s horde. He points out all the disparate elements that had to be fabricated separately then joined together, from the twisted delicate bands of gold that border the edges of the ring like lace on a dress to the simple round setting that holds each of the gemstones in place. “It’s a very traditional piece,” says Michaels, “but that doesn’t mean it’s easy to make.”

In contrast to this detailed, layered band is the brooch in front of me, which was designed by Hattman-Michaels and made from a single sheet of metal. If the ruby cigar band was an Italian palazzo, this would be a sleek Kyoto bathhouse. Its appeal is in its clarity. The piece, part of her “Origami” series, features a single piece of 14-karat yellow gold that has been folded and pierced with a tube of gold. The ornament is the sheet of gold and its angular peaks, while the tube provides a way to fasten it to a piece of clothing. The brooch is luxurious because gold is luxurious, but despite its weight, it’s not flashy.

Although Michaels designed the cigar band and Hattman-Michaels was the brains behind that brooch, these are not their emblems. The divergent styles found in these two pieces reveal not how much the two makers differ but rather their flexibility as a pair. They have been working together since the 1970s. Michaels claims to be the only third-generation American jewelry designer working today, so clearly he has a rich background in metalwork (he completed his first vessel at age seven). Hattman-Michaels started studying jewelry in college at Kent State University, where in 1974 she met a fellow student, the man who would become her husband. Their marriage and professional partnership have been built on shared values. They’re both passionate about artistry, interested in the technical side of jewelry making, and committed to producing new, innovative work. However, Michaels explains, “Nora is the painter; I’m the sculptor.” She works with color; he with negative space. She’s completed a course in gemology at the Gemological Institute of America, while he’s been working with dealers to find some of the most “freak of nature” stones to play with. “Right now, we’re looking for top material. We had a Brazilian stone dealer come in, and I said, ‘Show me your most exceptional pieces.’ I didn’t have time for anything else,” says Michaels. “We want to work with things that are incomparable.”

What constitutes a freak-of-nature jewel? Michaels holds up a piece of opal that was once a squid. The elongated teardrop glitters with fiery orange and seafoam green. It came from Queensland, Australia. “Silicone and water flow down into the crack of a mother rock, and they fill the empty space left by the animal’s body,” explains Hattman-Michaels. The couple is similarly excited about natural diamonds, which they vastly prefer to synthetic ones. (“They’re ridiculously overpriced,” says Michaels. “Why are we taking all this energy to grow a diamond? They’re in the ground already.”) For them, the diamonds’ natural refraction index (higher than any other material) and famous durability makes this carbon formation a “phenomenal gift from nature.” In designs like their Celestial Collection, which features scattered white diamonds that glitter like constellations, or their modernist floating rings, which feature gemstones bracketed by simple sculptural pieces of white gold, they’re seeking to “honor” the stones. “Human craftsmanship has to respect the diamond,” says Thomas.

When asked if they ever clash when it comes to jewelry making and design, the answer is a swift no. “We disagree about other things,” says Michaels. “But design has never been one of them.” They have slightly different working styles, but years of collaboration have hammered those out. Over the decades, they’ve exhibited internationally, collaborated with the top names in the game (De Beers, Tiffany, even Vogue), and “been knocked off hundreds of times,” says Michaels. When they first started out, retail jewelers weren’t promoting designers by name. Their work has helped shift that, creating a market where jewelers are respected as artists as well as craftspeople. They continue to take part in think tanks about jewelry, but they prefer to stay close to home in Maine, working with local clients and out-of-towners who cruise into Camden and leave with remarkable souvenirs.

According to this couple, most people buy expensive jewelry because they want to make a statement. Usually, that statement is about love: “We’re incredibly blessed in that respect. Our business, at its heart, is about love.” Whether they’re figuring out a new setting for grandma’s diamond or creating one-off pieces of wearable art, the designers try to bring their own sense of reverence to every object. “It’s powerful stuff we’re working with,” says Michaels. “And at this point in our careers, why not do things we really love?”

“Gemstone” is an imprecise term. Sometimes it refers to a piece of mineral crystal, like a diamond, while other times it’s used to refer to animal-made objects, like pearls, or even organic formations, like amber or opals. While Thomas Michaels and Nora Hattman-Michaels have worked with many precious materials, here are a few of their current favorites.

SAPPHIRE
While most people assume sapphires are blue, the stone actually comes in a variety of hues naturally, from sunny yellow to forest green. The only color you won’t find a sapphire in is red—that’s a ruby.

TOURMALINE
Mined in Maine, tourmaline is a local favorite. The watermelon variation—named for its side-by-side pink and green coloring—is particularly popular.

TANZANITE
A newer gemstone, tanzanite was only discovered in the 1970s. When it is first pulled from the ground, the rock looks brown, but after being heat treated it turns a distinguished purple.

OPALS
Australia is renowned for its opals, but these kaleidoscopic jewels have been mined throughout the world. Opals are 20 percent water, which is trapped inside their silica structure. Usually bought for their shifting hues, opals aren’t particularly hard, which makes them less suitable for everyday wear.

CITRINE
A type of quartz that gets its yellow or orange color from inclusions of iron, citrine is incredibly rare in nature. Most of the citrine available on the market is made from heat-treated amethyst. 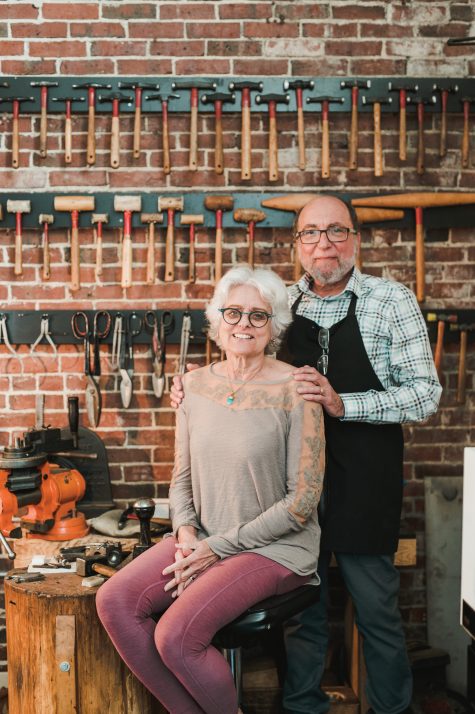 Since the 1970s, Thomas Michaels and his wife, Nora Hattman-Michaels, have been working together on jewelry design and fabrication. While they excel in slightly different arenas—he’s the technical force, and she’s the colorful risk-taker—they’ve found a way to blend their skills and build a business with international appeal. 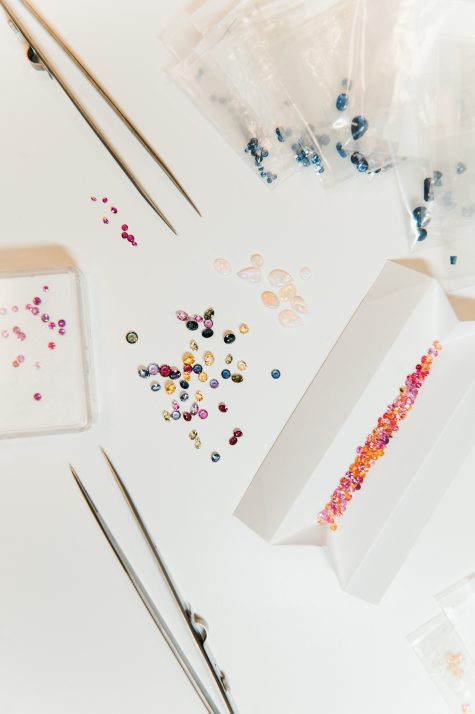 From peachy sapphires to grass green tourmaline, there are jewels of all hues inside Thomas Michaels Designers in Camden, Maine. 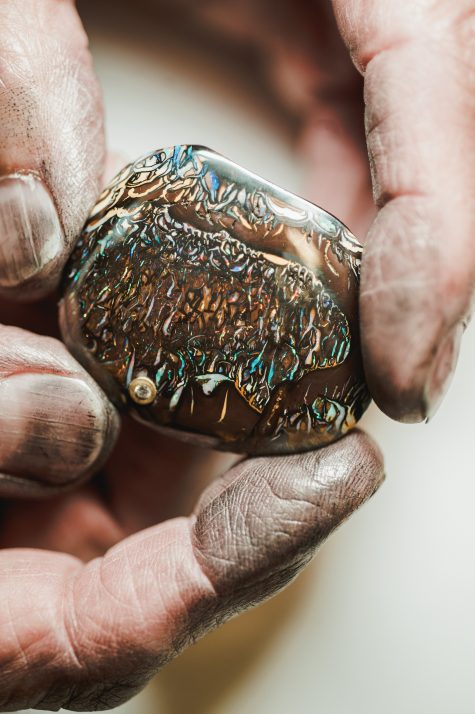 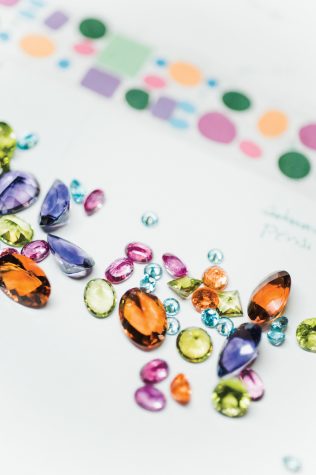 The couple has been experimenting with brighter colors in their creations. Here, a collection of rocks includes amethyst, peridot, mandarin garnet, citrine, tourmaline, and zircon. 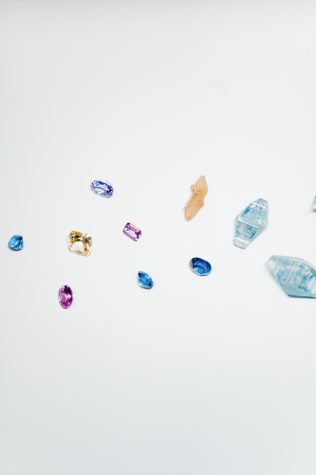 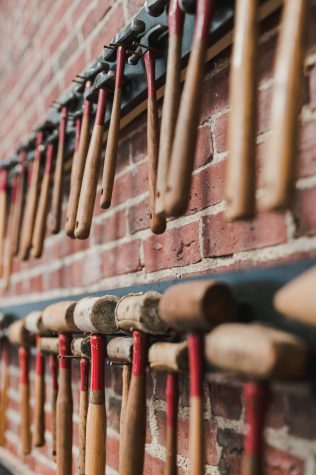 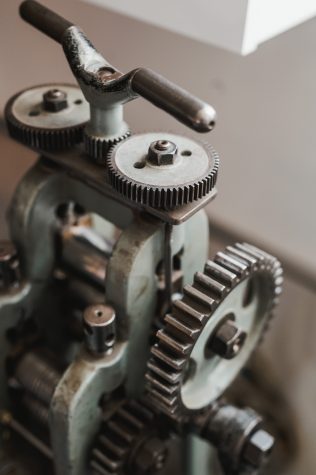 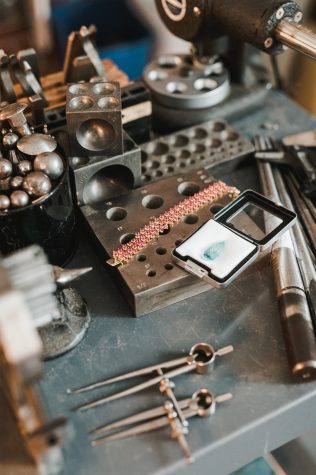 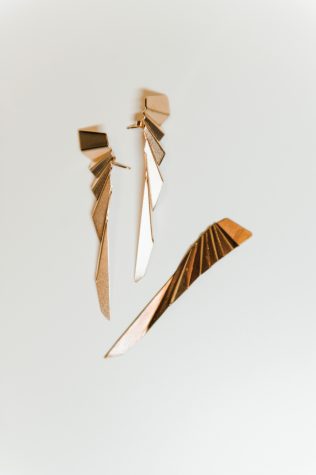 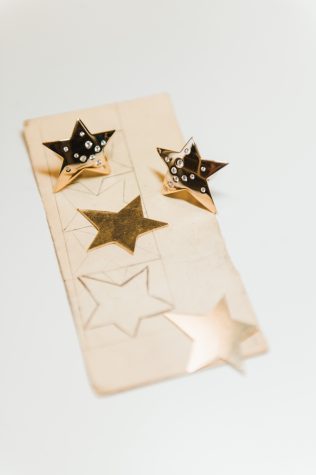 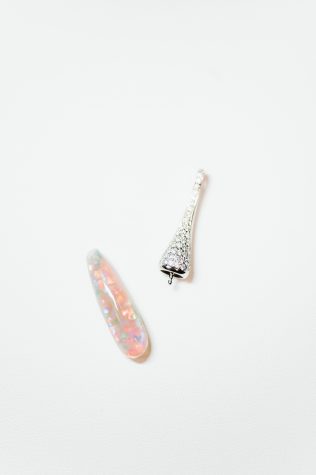 The couple turned this piece of belemnite (that’s the opalized piece of squid) into a pendant with a diamond-encrusted top. 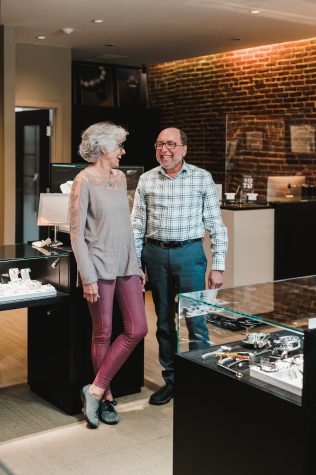