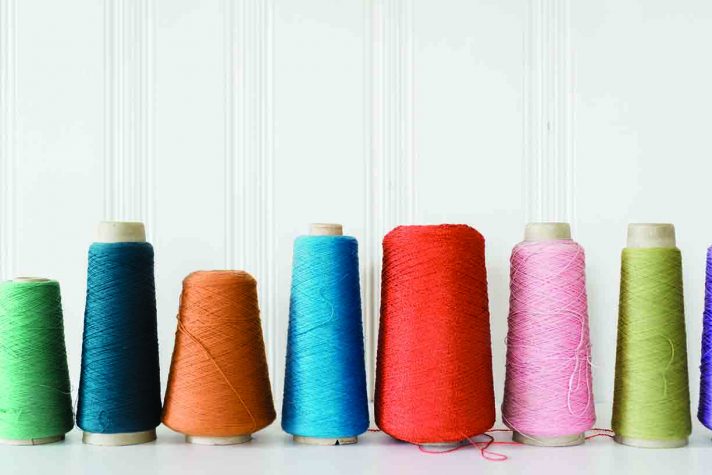 As a textile designer, Whelan has long been fascinated by color. She gets much of her inspiration from nature, then she paints the colors she wants in oils, then she has those images transformed into yarns to “see how they translate.” 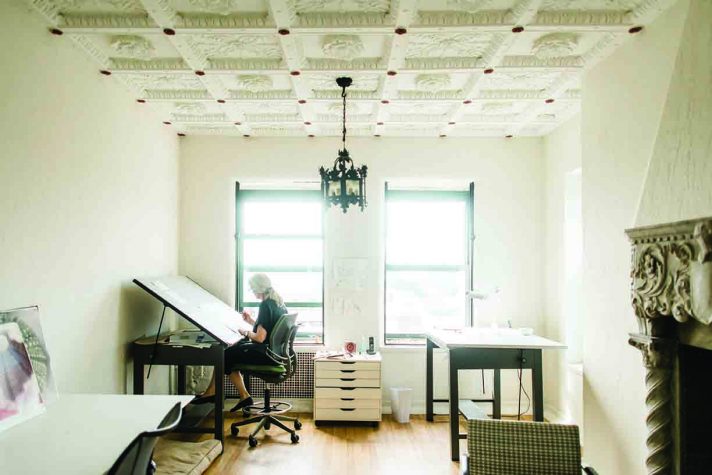 “I had a beautiful studio in Manhattan,” she says. “I knew that it was time for me to go when I was in New York and something inside me said, no matter what your clients think, I’m moving to Maine. I’m going to Maine. I almost stepped outside myself and thought, did I just say that?” 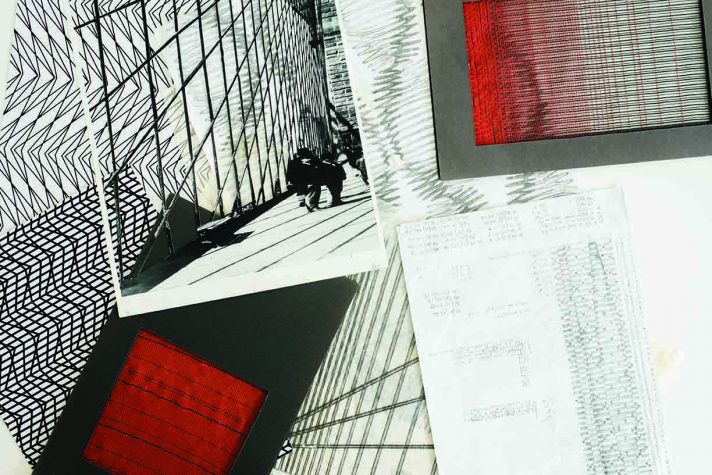 Sketches from her process. 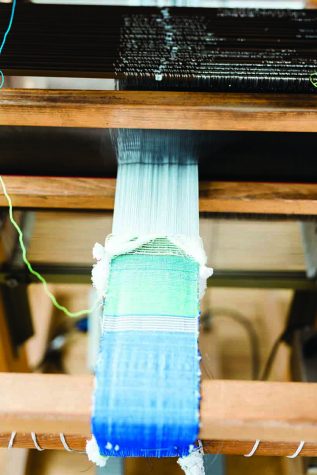 Weavings from her process. 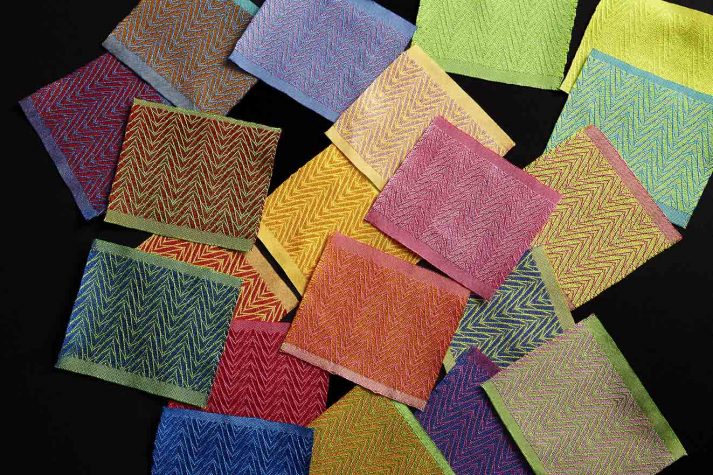 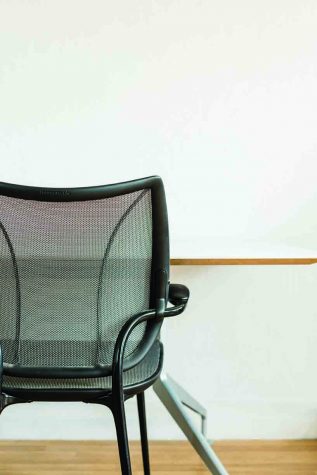 Her fabric has been used on everything from office furniture to running shoes. 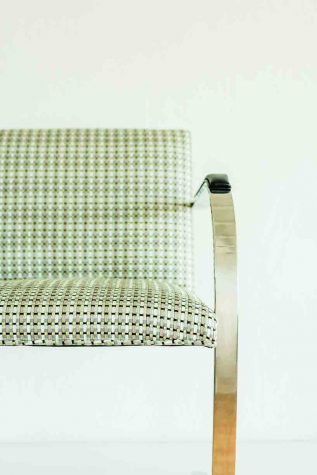 “I am also very much into designing fabrics that have function and performance. But beauty is a part of that,” she says. “Beauty is a function.” 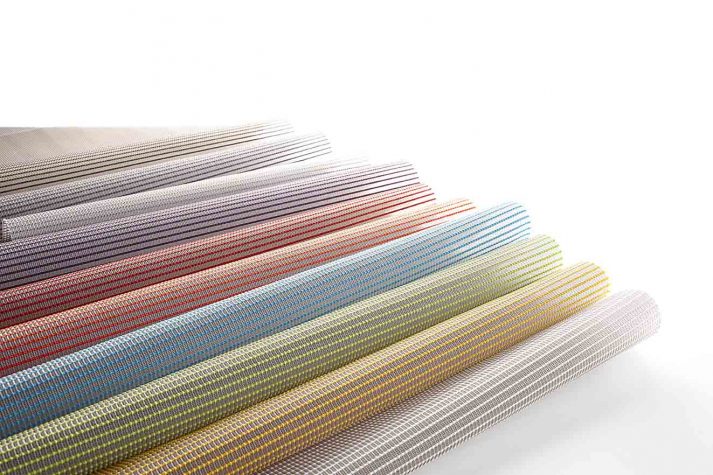 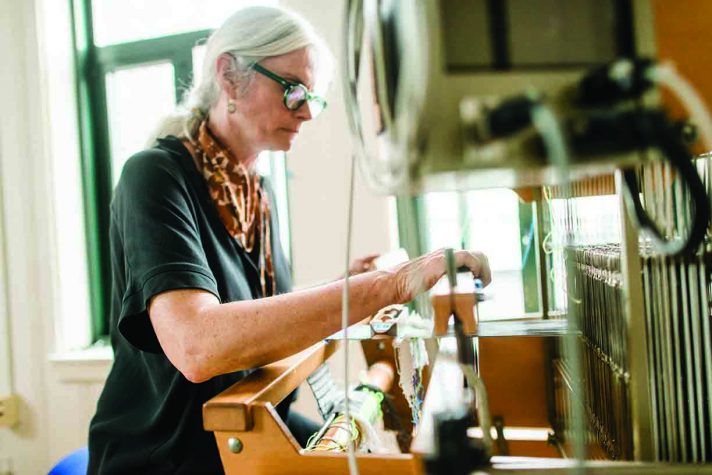 Maine, she says, has given her freedom to push her studio practice to a new level. “I’m interested right now in innovation inspired by nature,” she says.

Moving to Maine from Manhattan isn’t an easy process, though it sounds like a simple enough transition. You find a place to live, you hire movers, you leave, you arrive. Physically, the shift is complex, but that’s nothing compared to the mental shifts. Because you can’t fully prepare for those. You don’t know what’s coming, how a new place will change you, what it will do to your life, your work, your way of being in the world.

Designer Elizabeth Whelan was familiar with Maine; she had lived here for a few years after college. “I remember when I left, I thought I needed to return someday,” she says, speaking from her textile and design studio in the State Theatre building in downtown Portland. It took her 25 years to move back. “I had no idea what it would do to my studio practice,” she says. “But I didn’t want to be in a big city any longer. I wanted to be closer to nature.”

Whelan had “accomplished a lot as a designer in New York,” she explains. Over the decades, she worked on projects for Spinneybeck, where she created a line of woven leather fabrics to be used in aviation, automotive, marine, and residential interiors, and Nike, where she created products like moisture-wicking, reflective fabrics for night runners and intricately woven ballistic nylon fabrics for fashionable city sneakers. She worked frequently with the late industrial designer Niels Diffrient to make fabrics for his ergonomic chairs at Humanscale. This ongoing collaboration lead Whelan to create a fabric that would eventually wind up in the Cooper Hewitt, Smithsonian Design Museum, a major accomplishment for any artist. “It was a long-held wish to have my fabric in a major museum,” she says. “I thought, ‘Okay, now the curators know who I am.’” This sense of validation and accomplishment turned out to be the extra push she needed to achieve a cherished dream. In May 2014 she uprooted her work and life and resettled in Maine.

Although Whelan now has several local employees, when she first rented her studio it was “just me,” she recalls. “I knew I had a real opportunity to step back and reassess things. To ask myself what I want, what I enjoyed, what I had learned, what I wanted to leave behind.” In this new environment, the “currency” was different. New York runs on prestige. Careers are built on who you know. That’s true in Maine, too, but to a lesser extent and in a different way. “In New York, there is a big emphasis on being part of the design community,” she says. “But that exists everywhere. Design has a place in Maine.” She admits that this seems “obvious and ridiculous to say,” but Maine isn’t always viewed by outsiders as a place where cutting-edge design originates or takes root quickly.

Whelan is one of many thinkers working to change the reputation of the state through her contributions to the greater design world. Moving north helped her “open up [her] mind.” It allowed her to say yes to opportunities she might have otherwise missed, like her ongoing collaboration with Advanced Functional Fabrics of America (AFFOA). Some of the work she has done with AFFOA has been “really out there,” she says, including work she has done weaving technology-embedded fibers into light-emitting cloth that can “communicate messages.” While none of her projects with AFFOA have gone to the product development stage yet, these assignments are exciting, challenging, and, ten years ago, would have been unlikely to cross Whelan’s desk. “It’s not commercial-driven work, which was a change for me,” she says. “It’s idea-driven work. Being in Maine allowed me to step into that mental zone and really wrestle with it.”

Over the past six years, Whelan has developed new artistic practices, honed new skills, and forged new connections. Yet much of her work remains the same. She still starts everything by hand. She’s still interested in creating fabrics that aren’t just functional but also beautiful. (Though, as she notes, “beauty is a function.”) And she’s still drawing inspiration from the world around her. Once, for Nike, she designed a weave that echoed the forms of the Brooklyn Bridge. Now she’s found herself more inspired by nature than ever before.

“A few years ago, I was doing a collection for Nike,” she recalls, “and they asked me to explore biomimicry.” She started reading works by Janine Benyus, cofounder of the Biomimicry Institute, who describes this movement as a “conscious emulation of life’s genius.” Whelan says, “I loved what I was reading, and when I moved back to Maine, I kept thinking about it. What can I discover? What can nature teach me about design?”

A lot, it turns out. Nature is filled with interesting colors, patterns, and functions. In Maine, you can find phytoplankton that sparkle in the midnight waves, dragonflies that flit around on iridescent wings, and animals who change the color of their coats with each new season. Lately, Whelan has found herself besotted with mollusks. “I’ve been spending so much time in Blue Hill, and there are lots of sea urchins there,” she says. “I find it fascinating the way they build their shells so they can live their lives and eat. It’s where they put their brain. It’s also so interesting for someone who likes pattern. You can see how they arrange matter, just by looking inside. I got a bit smitten by it.”

While she has yet to release a durable urchin-weave nylon or a flickering firefly LED fabric, she’s enjoying the slow process of mulling over new ideas and new information. “I used to live in a place where the information was fast and loud,” she muses. “You get bonked on the head with it all the time, from billboards and neon.” Both Blue Hill and Portland allow her to access a different kind of information, she says. “I think of it as quiet information. It’s soothing. I think it’s a privilege to be around that.” 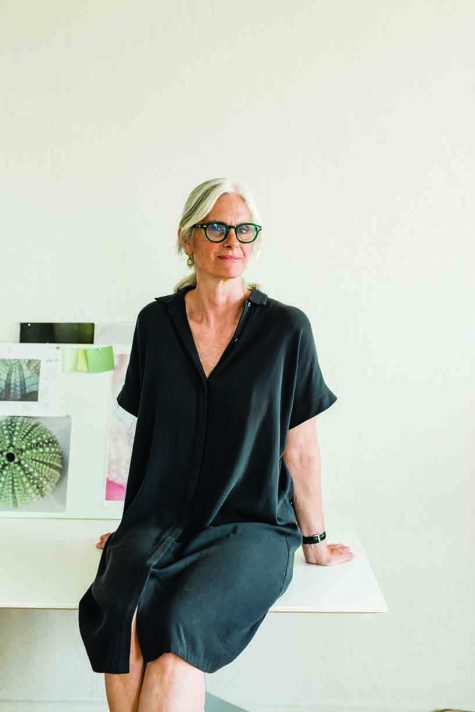 After years of living and working in New York City, Elizabeth Whelan moved her practice to Portland. She now works out of a studio located above the State Theatre in the heart of the city. 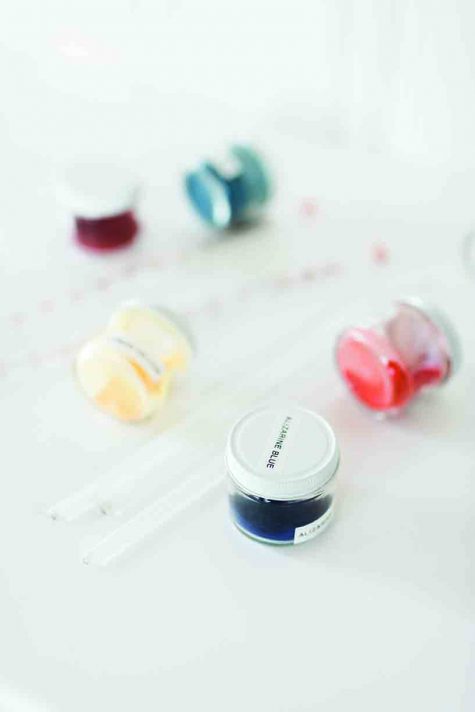 Pigments from her process. 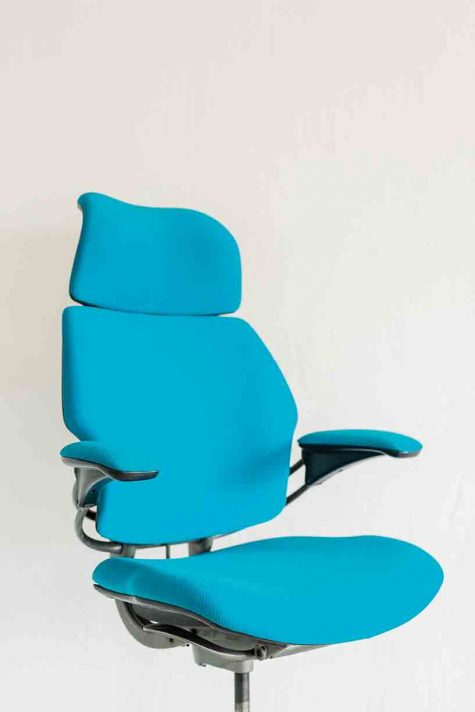 This chair was designed by Whelan’s longtime collaborator Niels Diffrient, made to be ergonomic and support the body on every level, from the metal base to the fabric armrests.