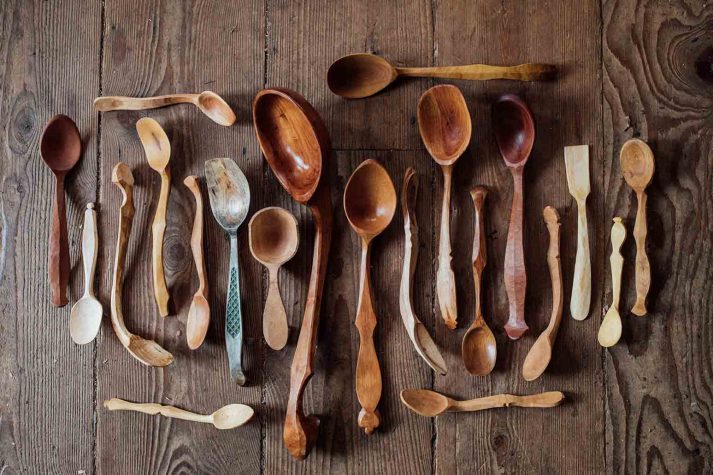 A variety of different woods can be used to make spoons, including some trees you might not have considered. Lilac, for instance, makes a beautiful spoon. “Someday I want to start a spoon carving club,” says Kenneth. “It wouldn’t cost anything, but we could do it through the winter. It would be a community carving night, because some people just want to come and make a spoon.” 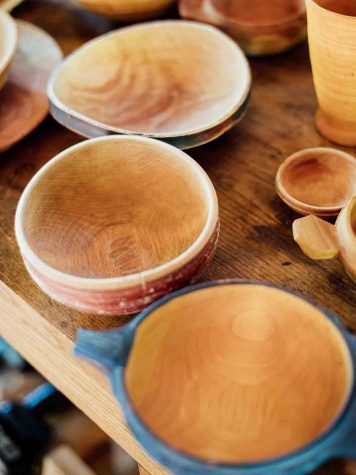 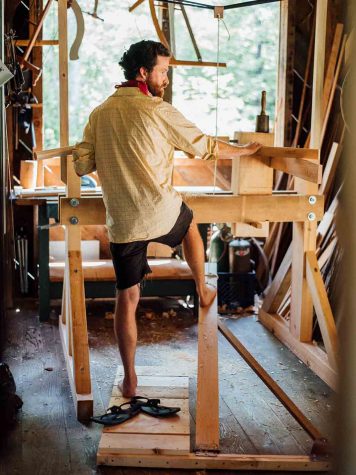 While the studio and school is still being built, it’s also being used. That’s how Kenneth and Angela do things—things aren’t necessarily finished because where’s the joy in that? 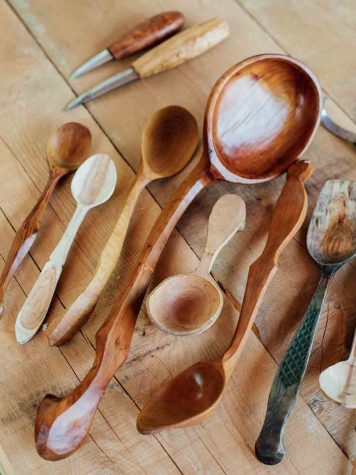 One of the lessons they teach students is how to carve a wooden spoon. “Hand skills translate,” says Angela. “Students will come and say they’ve never carved. But do you knit? Then you can make a spoon.” 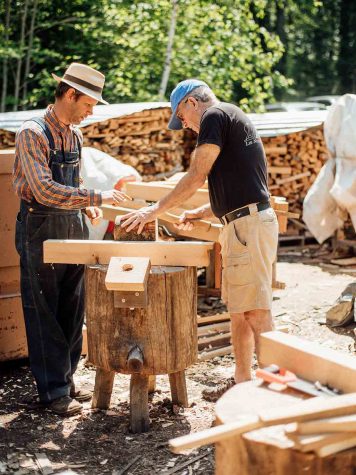 After learning basic skills from Kenneth, there inevitably comes a day when students have to put it all together themselves. 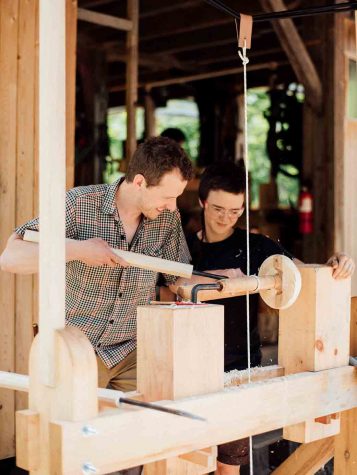 “I enjoy teaching in more experimental ways. I used to teach sailing and rock climbing. I enjoyed hands-on teaching and sharing skills and experience,” says Kenneth. He comes alive when he’s working with students, whether he’s guiding them on a sail around the Schoodic Peninsula or through sawing a birch log and making their first chair. 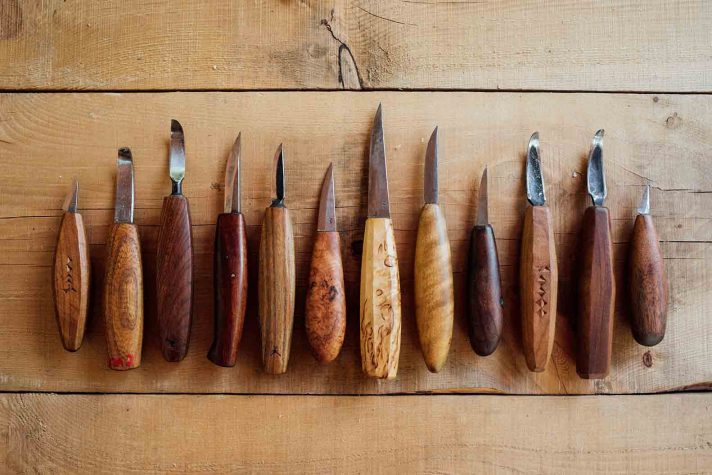 “One of the neat things about our school,” says Kenneth, “is that it’s stepping into a lifestyle.” Maybe, after you’ve spent some time working with your hands, you’ll feel a little more empowered, a little less dependent on consumer culture. “It might cause a ripple effect,” he hopes. 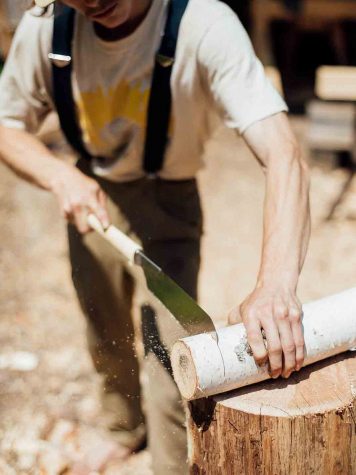 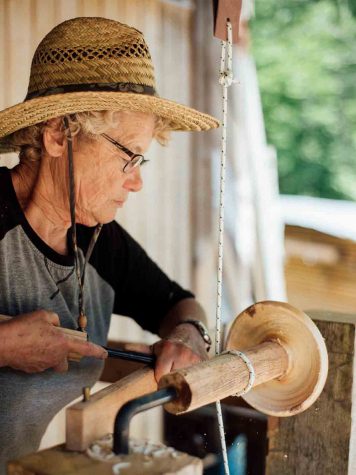 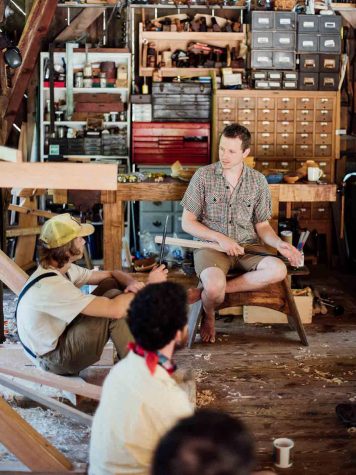 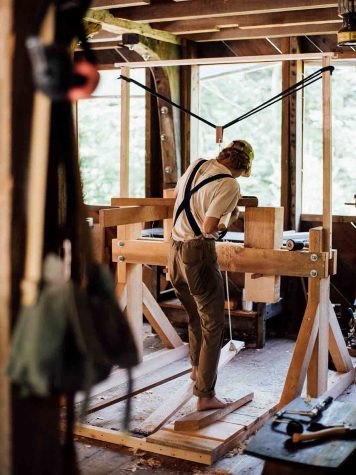 “I know so much about this spoon,” says Angela Kortemeier as she stands in her kitchen. She’s holding a long-handled cherrywood spoon that has a slight crook in the middle, like a ladle. It was made by her husband, Kenneth Kortemeier. Together, the couple owns and runs the Maine Coast Craft School, a small educational program located across the street (and up the road a ways) from their off-grid house in Bristol. There, Kenneth passes on his knowledge, including spoon carving, timber framing, and chair making, to adult students and apprentices. There, Kenneth is the star. “Everyone wants to learn from Kenneth,” says Angela. “He is one of those people who can do anything; he’s so skilled.” But here, in the kitchen, Angela is in charge. Here is where she makes meals for the students and interns. Here, in a house they built together, is where she uses Kenneth’s bowls, chairs, and spoons.

But the spoon is more than just a spoon, and Angela is more than “just a mom,” though it is a spoon (a very good one), and she is a mom (to teenage Conrad). The spoon is also a hand-crafted thing, something that connects Angela to the act of making and to the present moment. When she uses this spoon to stir a soup or to ladle out grains, she’s prompted to pay attention, to observe her surroundings, to feel thank-ful for what she’s built. And while Angela is also the “default mom” to Maine Coast Craft’s rotating cast of interns, she’s also the force that keeps the whole school running. After all, it was her idea to move it up here.

The Maine Coast Craft School began hosting students in 2017, but its history stretches back far longer. The school was founded in 1978 by Drew and Louise Langsner on a wooded plot of mountaintop land in Marshall, North Carolina. Back then, it was known as Country Workshops. Like Angela and Kenneth, who first met while studying fine art in Atlanta, the Langsners came from artistic backgrounds (he was a sculptor and she a dancer). “They were similar to us in that way,” reflects Angela. Kenneth interned at Country Workshops in the 1990s and frequently returned to teach throughout the years. In 2016 Drew and Louise decided they wanted to retire, so they asked Kenneth and Angela to come down for a summer. The idea was that they would hand over the reins of the school to the younger couple. Kenneth would teach, and Angela would “do everything else,” she says.

Things didn’t go according to plan. “We couldn’t figure it out,” says Angela. “It just wouldn’t have worked. By the end of the summer, I was saying to Kenneth, ‘I think I have a better idea.’” And she did. Instead of taking over the property (where Drew and Louise still lived) and continuing to house students on their land (which Drew and Louise no longer wanted to do), they would build a new workshop, close to their own home but not too close. “From Drew and Louise’s experience, I saw it so clearly,” says Angela. “I knew I wasn’t going to have a school in my home.” She also knew that the school would thrive if it were moved to Maine; Vacationland has plenty of readily available rooms to rent, as well as local restaurants and other places for students to get their meals. Kenneth and Angela wouldn’t have to provide everything, which would free them up to focus on developing their pedagogy and sustaining the hand tools business. In addition to hosting students for classes, Drew and Louise also sold hand tools out of their North Carolina home, including adzes, gouges, and draw-knives made by Hans Karlsson of Sweden; S. Djarv hook knives (also from Sweden); and adzes made by Jason Lonon. Although these aren’t household names, the stock list is a veritable who’s who of the hand tool community. It was thanks to the tool sales and the mailing list that the Kortemeiers inherited from Drew and Louise that they were able to start their own school. “They’re still important mentors and advisors for us,” says Angela. “It was with their bless-ing, their tool sales, their mailing list, and their reputation that we were able to open a new school. It wouldn’t have worked otherwise.”

For Kenneth, teaching felt like a natural evolution of his ongoing artistic practice. After training in sculpture at the Atlanta College of Art, Kenneth took a series of jobs working as a boat builder, a furniture maker, and a carpenter. (Angela, Kenneth is quick to point out, has also worked in cabinetry and is a “trained and skilled woodworker herself with knack, ability, and interest.”) During the summer, he also worked for Hurricane Island Outward Bound School in Maine as an instructor. “At one point, I tried to make things alone and sell them and have that support my life,” he says. “But I found I was drawn more toward teaching and encouraging other people.” He credits his years teaching sailing and rock climbing for helping him to become a more engaging and effective instructor. “Shifting from wilderness-based adventures to ‘let’s make a chair for a week’ has a surprisingly lot of parallels,” he explains. In both immersion programs, he works to lay the groundwork for a big task by working on a series of smaller steps. After learning basic skills, there inevitably comes a day when students have to put it all together; whether that means navigating across the sandbar at Schoodic Peninsula or attaching legs to a chair, the sense of anticipation is the same. “I often notice that on the morning we are going to put the chair together, students will start off nervous,” he says. “My job as the person facilitating it is to prepare them for success. But ultimately, they will need to do it. They need to do it themselves.” Hands-on learning, he adds, creates a “lovely confidence boost.”

Maine Coast Craft School also allows students a glimpse into the Kortemeiers’ somewhat radical lifestyle. “There’s a strong push in our culture to go out and buy something, or to pay people to do something,” says Kenneth. “We’ve always been interested in figuring out how to do things for ourselves.” In a way, that’s how this all started. Instead of buying a chair, Kenneth figured out how to make one. Instead of hiring an architect and builder, Angela created the designs for their home and Kenneth built it. They fix their own clothes and repair their own tires. They live off-grid. “We chop our own firewood, we haul all of our water, and we don’t pay a power bill,” says Angela. Instead of a conventional bathroom, they use a wooden yurt-shaped outhouse, inspired by iconic Maine maker Bill Coperthwaite. “That’s one of the neat things about our school,” says Kenneth. “It’s stepping into a lifestyle. There are other places you can go to learn to work with hand tools, but it’s the whole context that’s pretty unique.” He hopes that students will leave the Maine Coast Craft School with a renewed sense of self-reliance, and perhaps an interest in doing other things with their hands.

Which brings us back to the spoon. “We have students come to us who have never carved a spoon,” Angela says as she walks around the kitchen, preparing a pot of tea. “But any hand skills translate. Do you knit? Do you quilt? Get a knife in those hands and you’re already ahead of someone who has only ever used a computer and never made anything.” Like her husband, Angela is more than a little suspicious of consumerism and how it plays out in American culture. Capitalism discourages the kind of independence that Angela and Kenneth both seek. It also can alienate people from one of the most basic joys in life. “There’s something about making that is so empowering,” says Angela. “It fulfills this very human need. Our culture has gotten away from that. But I think people are built to create things. It imbues things with love.”

Handling an object also infuses it with stories. Angela takes a ceramic piece out of a cabinet to show me where the potter’s thumbprints are visible. “Look at this,” she says. “My friend Ingrid made this, and I use it almost every day.” Whenever she holds this bowl or that spoon or sits in that chair, she is reminded of the hands that worked on it. “We love stories,” she says. “We also love stuff. We love our connections with other humans. Handmade things can bring that all together.” By spreading the gospel of handmade craft, Kenneth and Angela hope to encourage more DIY days, more hand-carved spoons, more meditative moments and richly lived lives. “Teaching spreads ideas into the world,” says Kenneth. “It has an amazing ripple effect.” 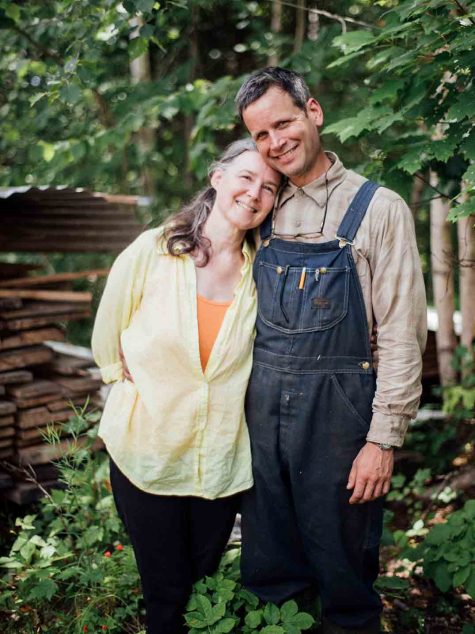 Angela and Kenneth Kortemeier moved to Maine in 2003 after years of living and teaching in Georgia. “Everybody wants to learn from Kenneth,” says Angela of her husband and longtime collaborator, “But I’m the big organizing factor.” Together, they’ve built a home, a life, and a school. 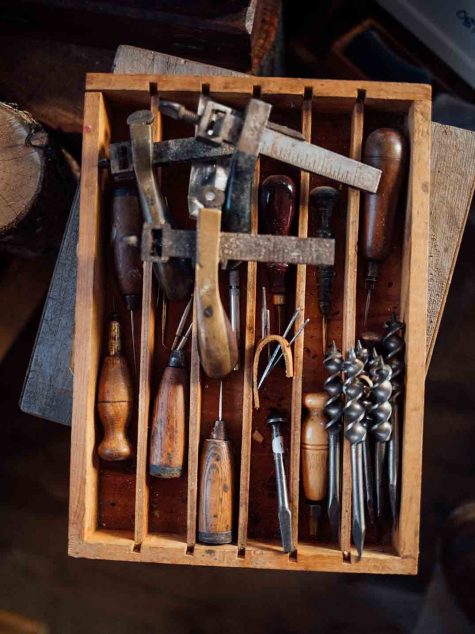 A selection of chisels and hand planes. 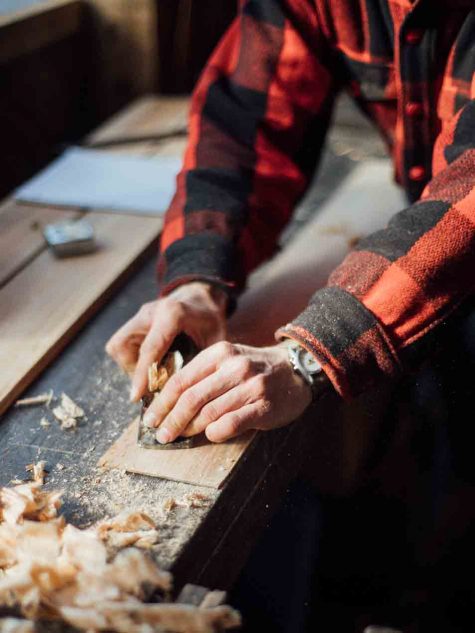 Working with hand tools is an important part of the practice at Maine Coast Craft.