Torn Down, Built Up 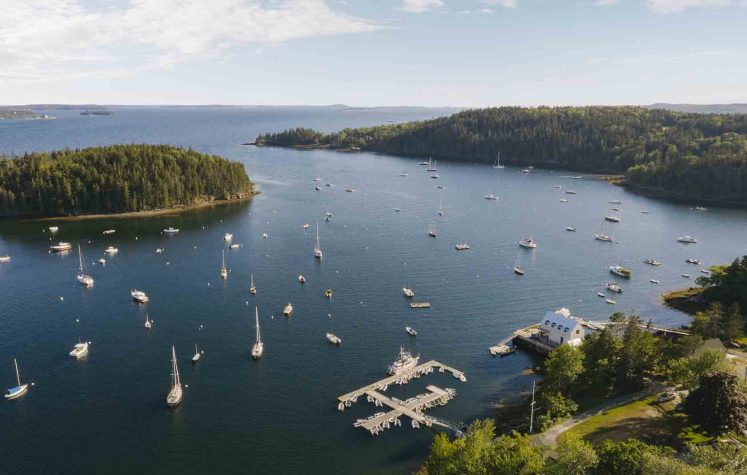 The house on the wharf (above) had been many things over the years: a ticket booth for a steamship company, a laundromat. When Miriam Godfrey first purchased it, she had plans to renovate and keep the old structure. This proved impossible. 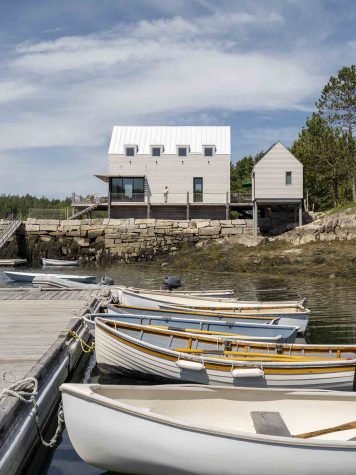 Working on this project gave homeowner Miriam Godfrey a “great education in contemporary design,” she says. “I’ve been through a total mind-opening experience.” 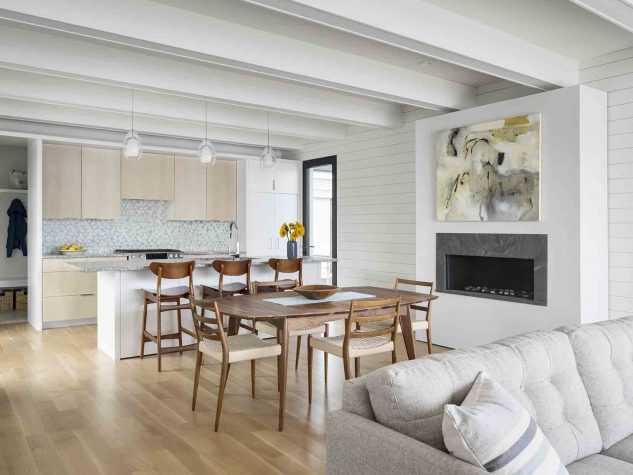 Godfrey brought in a friend, interior designer Lisa Morris, to help clarify her cottage style to match the clean lines of the home. Morris wanted to highlight Godfrey’s interest in quilting in the finishings, hence this triangle-patterned tile backsplash. 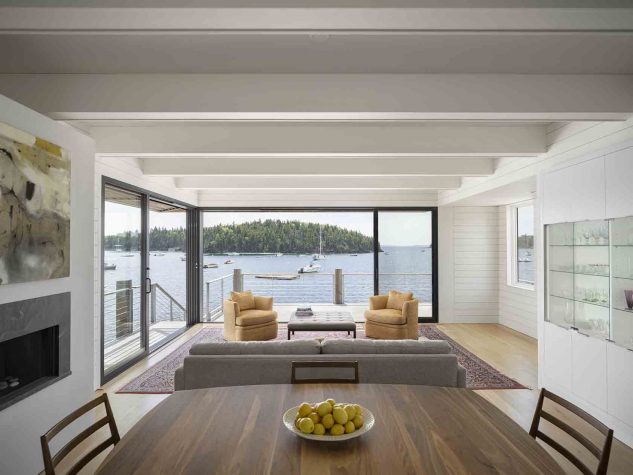 The rug once belonged to Godfrey’s mother-in-law. “I wanted this to really pop,” she says. “It’s very colorful. I wanted everything else to be neutral and then to have a bit of color from the rug, or from a bright quilt thrown over a chair.” 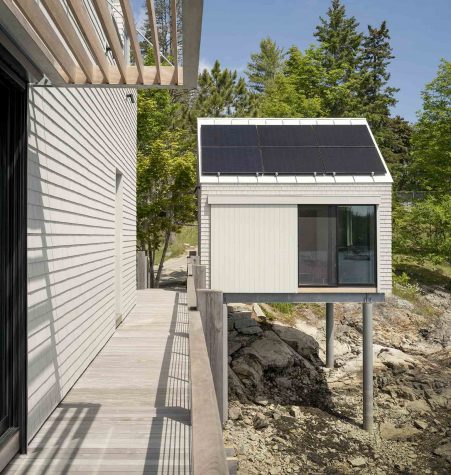 Godfrey calls this little ancillary structure the “ice house.” It’s a guesthouse and quilter’s studio, complete with a Murphy bed and a big worktable for piecing together fabric. 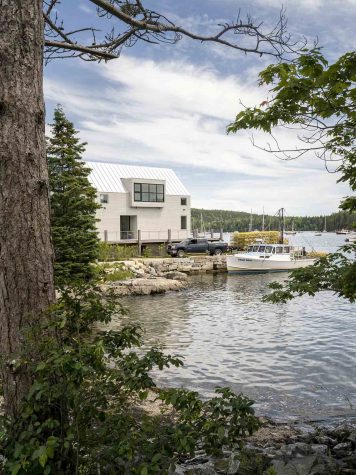 While Godfrey knows some of her neighbors might be dismayed at the change, she hopes her adherence to local forms and materials will help soften the blow of losing the old building. 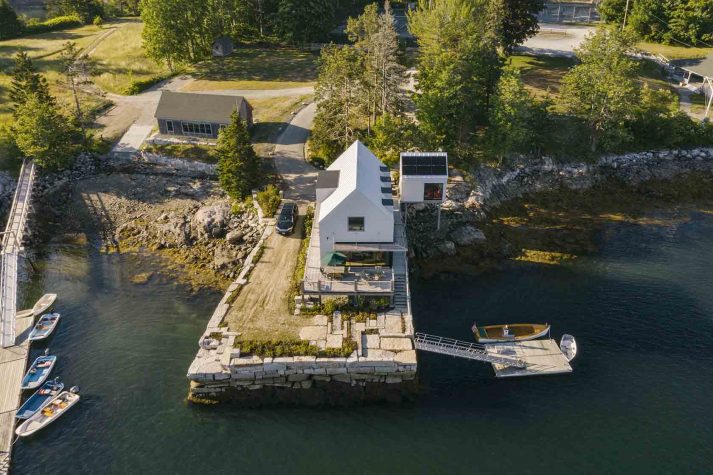 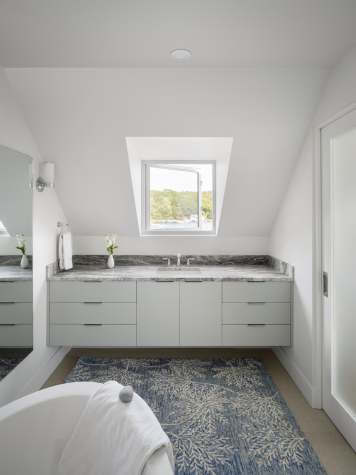 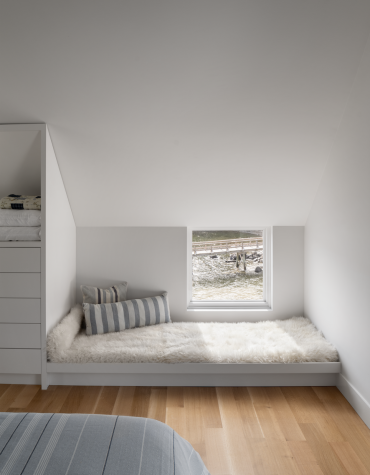 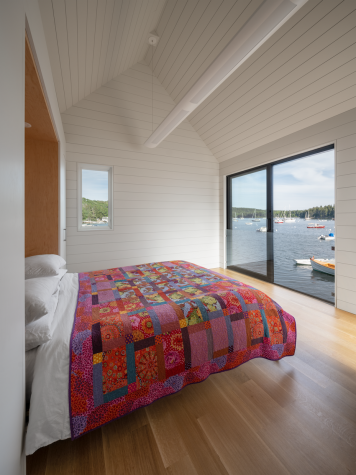 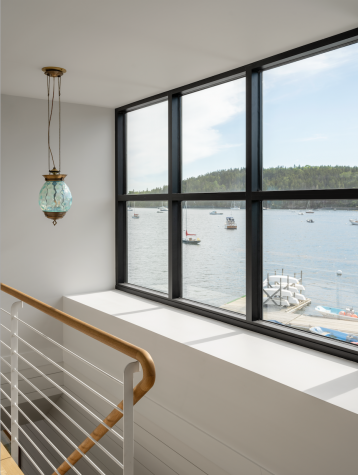 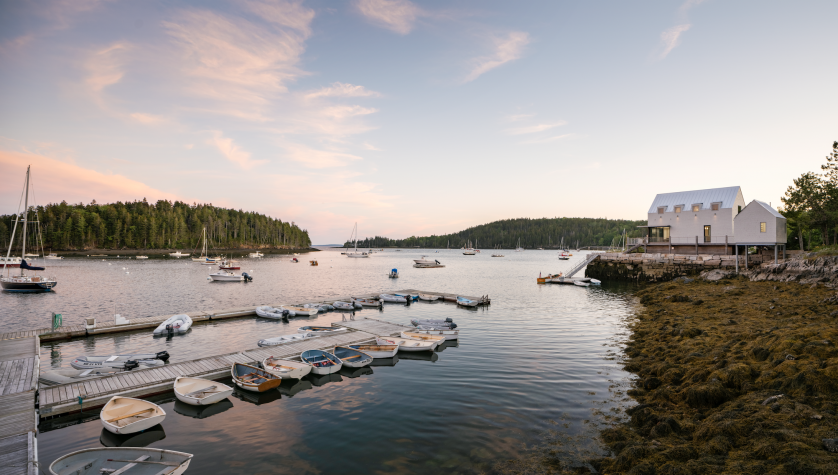 She had wanted the house on the wharf for years. “My husband didn’t want any part of it,” Miriam Godfrey says with a rueful laugh. He recognized that it would be a big job to fix up the old building on that quarter-acre waterfront lot. It would probably need to be torn down, and building on the wharf—well, that would be challenging, maybe even impossible. They were busy with their life in Yarmouth; they didn’t need to buy a place in Blue Hill, even if the location was lovely. They both loved visiting friends in the area, but they weren’t going to move up the coast year-round.

Then the unthinkable happened. Godfrey’s husband became terminally ill. “After my husband passed, I came up here a week later. I had to get away,” she says. “Here” is a small gabled house on the side of a rocky granite shore, designed by architect J.T. Loomis of Elliott Architects and built for Godfrey by MK Construction, who completed it this year. For the first few months of her Blue Hill retreat, Godfrey lived in the old structure, which was once a ticket booth for a steamboat company. “Restoring it was my first hope,” she says. But Loomis points out that it “wasn’t in any shape to be restored—that was evident right away.” So Godfrey simply “eked it out for a few months” without a heater before they began to tear down the slowly rotting timbers, install a new foundation, and build anew.

Godfrey grew up summering in Blue Hill. She had learned to play tennis nearby and had spent summer afternoons sailing on the easy waters between the islands. She knew she could build a new life near her old friends in Blue Hill, and she decided that a new life needed a new space, complete with a new visual style. “Before I started this, I was drawn to the traditional cottage, Maine-y, coastal look,” she says. That’s what her home in Yarmouth was like: charming, traditional, and in the words of interior designer and longtime friend Lisa Morris, “quite chock full.” Rather than simply recreate that look farther east, both Morris and Loomis pushed Godfrey to consider a streamlined, minimalist, material-focused style, which she gratefully embraced. Working on this project gave her a “great education in contemporary design,” she says. “I’ve been through a total mind-opening experience.”

For Loomis, too, the project was instructive. His office had worked on similar coastal properties, but he knew right away that this waterfront site would present some unique challenges. “Staging anything was complicated,” he says. “There’s no space. It’s about a quarter-acre lot, and there’s a whole complicated easement legalese thing that has to happen to make that work.” Space was at a premium, which meant every square inch of wharf space had to be considered. Plus, floodplain ordinances required the new structure be built higher than the old, which meant Loomis needed to bring in fresh stone and, for the secondary structure, fresh piers. Fortunately, he says, Godfrey “wasn’t looking for a big expansion. She’s an empty nester and needed a place just for her.” But even so, in order to build so close to the water, they would need to fortify the foundations. “We negotiated with the Department of Environmental Protection [DEP] to build there, and to make it, we had to essentially restore a section of the coastline,” Loomis recalls, adding, “The DEP likes it whenever we can do that.”

In order to make the most of the modest square footage, Loomis created a floor plan that has lots of overlapping spaces, dual-use areas, and built-in storage. “Not everything related to the kitchen is right in the kitchen,” Loomis explains. He tucked a pantry into the mudroom space, and he added storage for flatware and dishes in the dining room area. “We did glass cabinets so she could store and display a collection of glassware,” he says. Throughout the home, decorative and functional elements merge. This is true even of the building materials. “We wanted to create something that is very hard-wearing,” says Loomis. “It’s an exposed site, so we needed tough, good, Maine-tested materials.” The main house has a metal roof and cedar shingle siding, plus decking made from tough hemlock framing. “Everything weathers,” Loomis explains. “You don’t maintain it. You don’t finish it. It weathers and grays and becomes naturally rot resistant.”

The gray of the cedar siding echoes the grays of the granite wharf and the grays of the water. Across a small stretch of decking, there’s another shingle-sided structure that Loomis and Godfrey call “the ice house.” This clever, compact, floating structure is a combination of a guesthouse and artist’s studio. “Miriam is a quilter, so we made her a studio with a tiny little guest area and a tiny little bathroom,” says Loomis. “We designed a house with a Murphy bed that folds up. Why did those ever go out of style?” says Godfrey, who calls the creation of this section “particularly collaborative.” Loomis and Morris designed a series of custom cupboards where Godfrey can store her quilting supplies, plus a workspace for her sewing. Quilting also tends to require a lot of light (lest you strain your eyes), and Loomis wanted to do everything he could to embrace the ocean views. Hence the sliding glass doors. “There’s nothing to step onto when you open it,” says Loomis. “If you kept walking, you’d fall into the ocean. But it allows her to have this big window out over the water.”

It also makes it possible for Godfrey to push back the glass and welcome the bracing salty air right into her home. No matter where you are on the property, you’re never far from the water, and the house won’t let you forget it. “The approach to this house was to create a clean, contemporary box,” says Morris. But having known Godfrey for years, she also knew it was important to bring her love of quilting into the interior design. While the walls are white, the tiles are neutral, and the floors are white oak; there are splashes of pattern throughout that remind one of fabric. “For instance,” Morris explains, “the backsplash in the kitchen is a Walker Zanger design, and it’s made of a series of triangles. It reads very modern, which fits with the exterior of the house, but it wasn’t lost on me that it also looks like a quilt.” Morris also helped select contemporary blown-glass light fixtures, which add warmth and depth to the home. “We laid in rugs that have a woven, sweater quality,” she says. While clean and bright, neither structure feels cold or sterile. “I just adored her husband. I wanted to make this place for Miriam a real retreat. I had him on my mind the whole time.”

Although he never saw this home, Godfrey’s late husband made the project possible. “I wouldn’t have done this,” she says. “I wouldn’t have been able to.” Grief gave her the energy and willpower to “make something out of it.” She says, “I asked myself, how can you make something positive after death? How can you create something?” As we speak, she’s looking out at the ocean as it sparkles under the sun. The tide is high, and fish leap from the water as gulls swoop, hoping for an easy meal. Life goes on, and Godfrey feels lucky to be part of it, lucky to be here. “Lucky,” she says, “by the horrible chance of death. I lost something to have this. But in a way, I felt like I was put here to do this. Not that I was creating some magic spot for me. It doesn’t feel like that. It feels like I’m honored to be here. I’m honored to live here.” 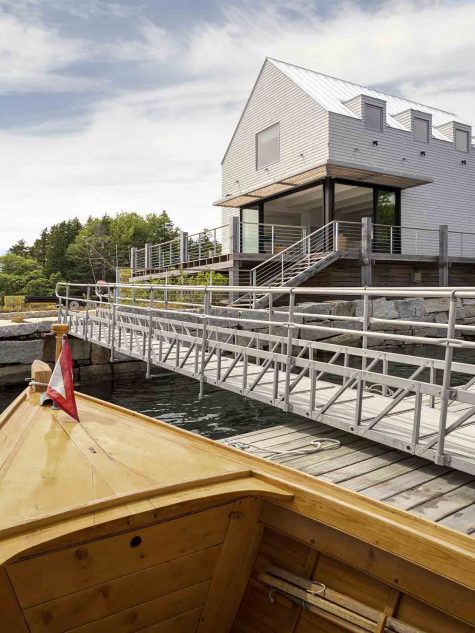 In order to comply with the flood plain ordinance, the home needed to be raised up several feet, and the shoreline had to be fortified. With the added two feet of rock, the house gained a sturdy foundation and a bit of space to allow for rising sea levels. 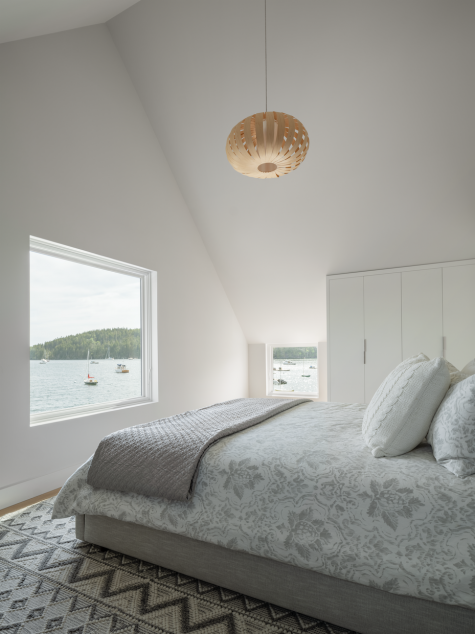 In this house, Godfrey says, “the windows are the art. Every window is a framed piece of art. That’s the showcase.” 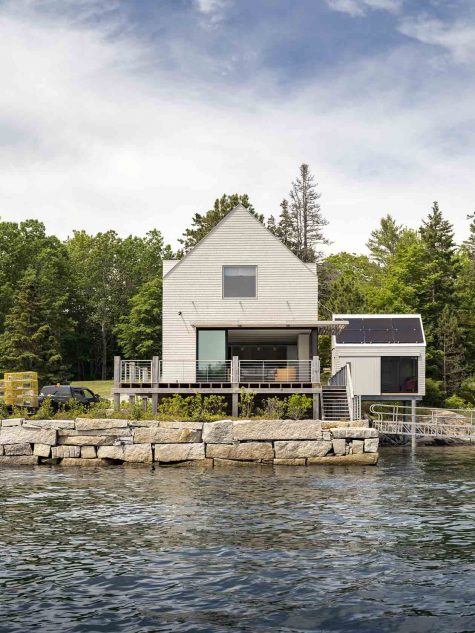 “When we ripped it down, I cried,” she reveals. Loomis used rough hemlock framing for the deck, which will weather gracefully on the exposed site.