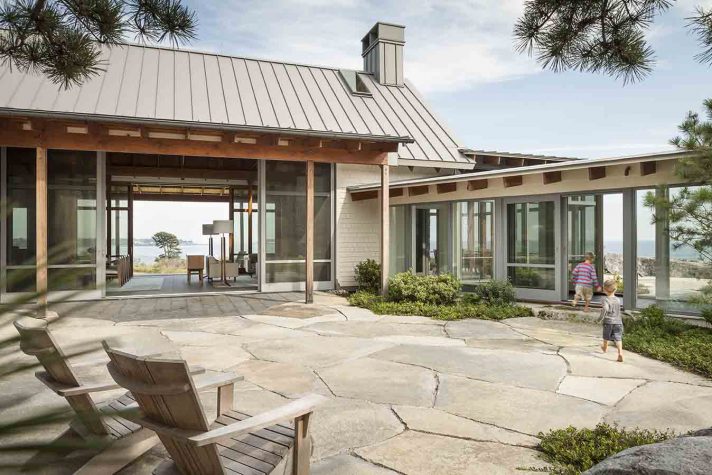 “The early stages of the project were really collaborative with the architect, Whitten Architects, and the inspiration came about in numerous ways. Views were important to the client, so the siting of the house and the relationship between indoor-outdoor spaces were central to the team’s approach. Our ideas are rooted in two primary things: one is the client’s needs and interests, which we like to think of as both qualitative and quantitative—quantitative is something like a terrace large enough for 12 people to gather, and the qualitative aspect is defined by asking the question, ‘What’s it like to be there?’ We try to understand what the client appreciates about their home, their site, and Maine, so that we can reveal and heighten those particular experiences. The second thing we do is address the development of the landscape in its existing condition. In this case, the existing condition is the waterfront and the house. So, we integrated select native plants that spoke to the context within which the house is located. Rather than create something that separates the house from its environment, we infilled the seam between the house and the coast with things that are like the coast.

“We secured large ledge-like granite boulders and placed them around the property, mimicking the orientation of large stones on the shore. It may be subliminal to most, but that was something we did down to the degree. While the stones were dangling off the end of a crane, we moved them and aligned their axes with the given angle so that we could keep the intended organizational relation to the shore. The client really supported bringing in larger stones and larger trees, significant enough in size to make you question whether those things were already here and if the house was built around them.

“The project was a series of connected decisions, but they’re anchored in the pragmatic part of how they’ll use their property. It’s not just about the space, it’s about what it’s like to be there.”
—Todd Richardson, principal at Richardson & Associates