Coffin and Daughter Lettercutters Bring Energy to a Dying Craft 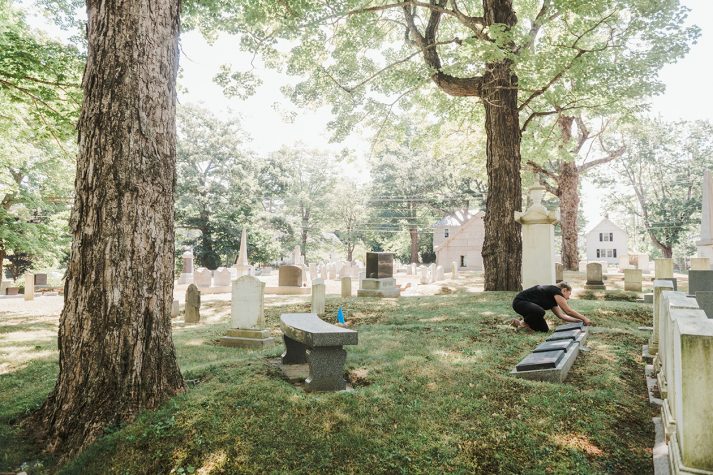 When she’s not working, Sigrid likes to visit cemeteries. They’ve become a source of knowledge, inspiration, and peace for the artist. “I never ever tire of cemeteries. My husband knows, wherever we are, if you pass a cemetery, we’ll turn around and spend five or so minutes kicking around,” she says. 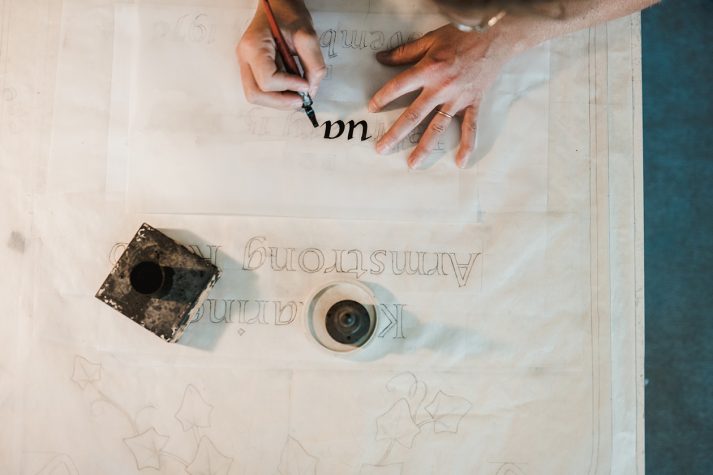 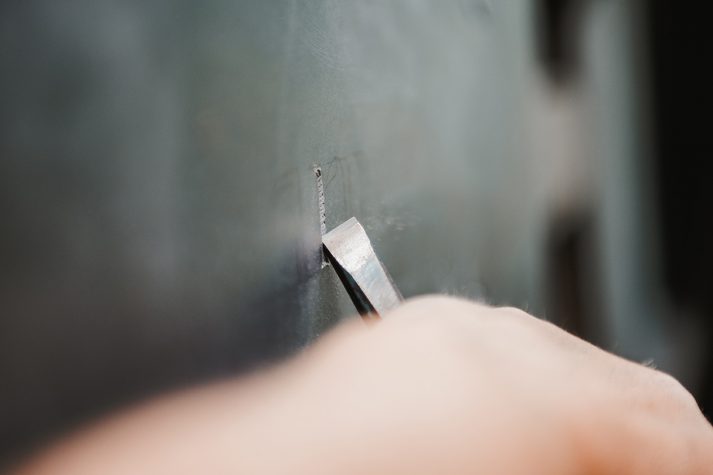 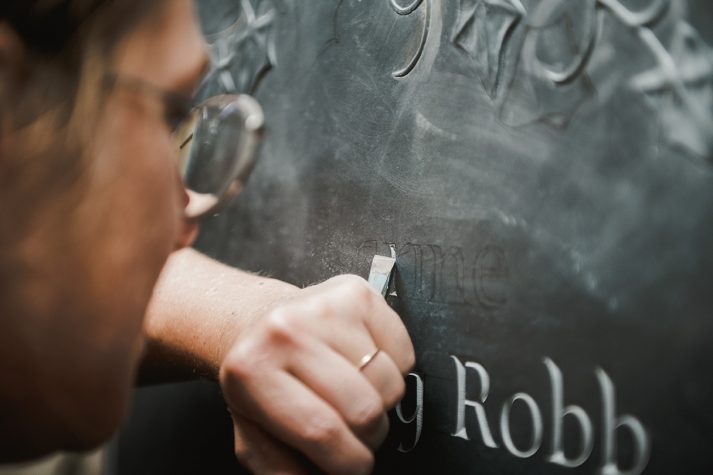 One way to tell whether a piece was carved by hand is through examining the trench at the center of a letter. A chiseled letter will have a beveled center, while a machine-cut letter will be uniformly deep. 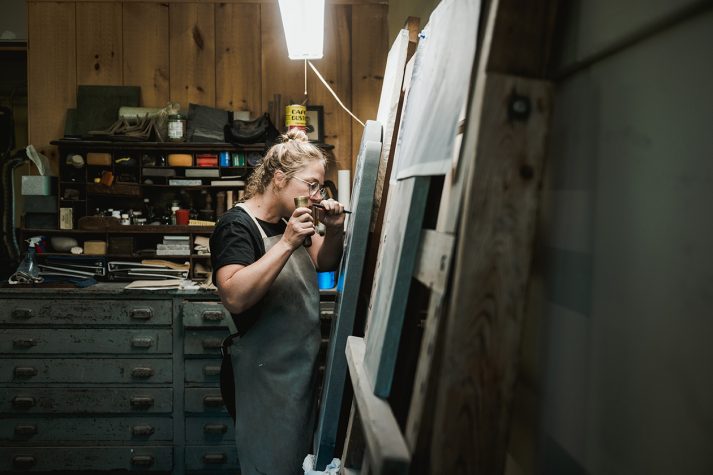 Not every state allows the use of slate, but Maine does. “We get most of ours from a quarry in Monson,” she reveals. 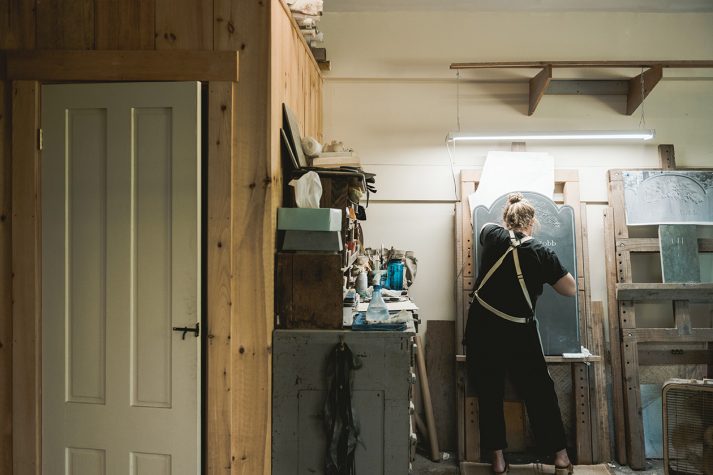 “My medium is as permanent as we can get,” she says. When we need to convey deeply meaningful information, stone is “the natural medium to choose. Which is why we use it mostly for internment.” 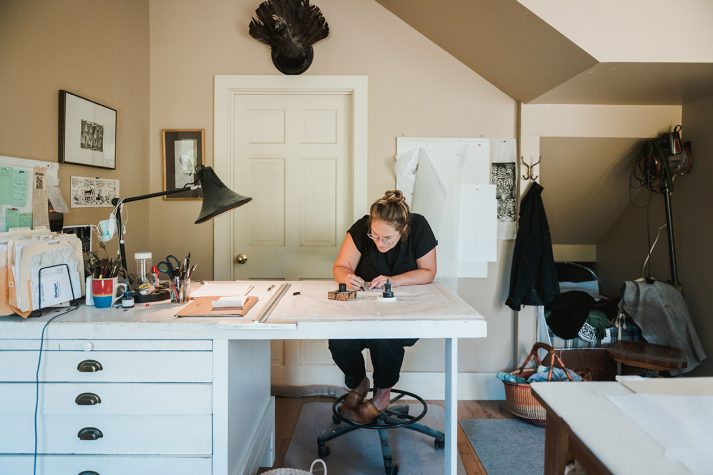 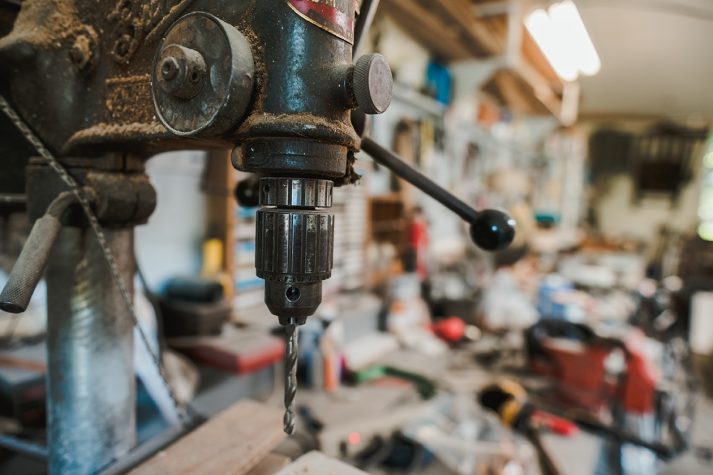 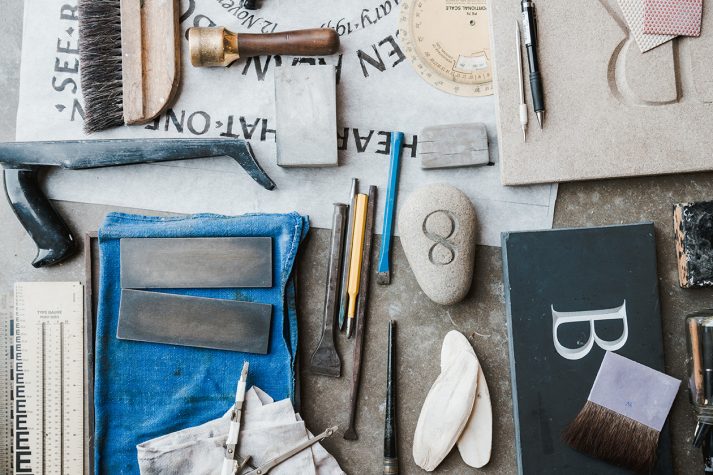 Sigrid Coffin has worked with letters from a young age. As a child, her mother taught her calligraphy but her skills have expanded and sharpened over the years.

There’s an old cemetery near my home in Buxton that I like to visit in the fall, when the big maple turns a lively red and the thick-trunked oak sheds its last acorns. I like to wander among the rows of granite, slate, and marble headstones. Some are so weathered you can no longer read the names, while others are freshly polished and cut, evidence of a family’s too-recent grief. Like most U.S. cemeteries, the vast majority of these newer headstones were cut by machine, but now and then you’ll spot one with that distinctive bevel trench in the center of the letter. It’s a subtle difference, but a telling one. All of the older stones have this feature. It’s a sign that these stones were cut by hand with sharpened chisel and mallet—another dying practice in a world full of fading crafts.

There are fewer than 50 letter cutters left in America. Two of them, Sigrid Coffin and her father, Douglas Coffin, live in the small city of Belfast, Maine. It’s a good place for their kind of work. The two-person company, Coffin and Daughter Lettercutters, is never without clients. “There’s a lot of people here who really appreciate a traditional craft: wooden boats, dry-stacked stone walls, handbuilt furniture,” Sigrid says. “In a state with more strip malls and Targets, maybe this wouldn’t be as important. I don’t know. All I know is that people like to work with their hands in Maine. They like to work with tools. They like to see what we do.”

One might say nominative determinism brought them both to this unusual profession, but that’s not the whole story. Theirs is a family of artists. “My mom is a sculptor, and before my dad started letter cutting, he had a background in graphic design,” explains Sigrid. But after one letter-cutting workshop with a well-known craftsperson from England, Douglas decided to shift his focus. At the time, they were living in Philadelphia, but a few years later the family moved home to Maine, where Douglas opened his one-man shop. Decades passed, and Sigrid grew up and moved to California. Eventually, the East Coast called her home. “Why don’t you join me?” Douglas asked his daughter one day. And so she did.

Like her father, Sigrid found the work deeply rewarding. It’s not a job that requires constant innovation, nor is it one with much room for improvisation, but that’s alright. Sigrid has other creative outlets (knitting, sewing, cooking, sketching). When the Coffins go to work, they focus on the client and meeting their needs. “We think of ourselves more as craftspeople than artists,” she says. They’re translating symbols to stone, and they’re doing so within a specific context. Their work is bound not only by material and message but also by tradition. “Most people who come to us aren’t looking for something that will look really modern,” she says. “If they’re drawn to hand-carved traditional headstones, they want them to look like that.” However, very few people arrive with perfect sketches of their would-be stones. “Most people don’t think about this until they have to,” says Sigrid. So it’s up to the Coffins to create a design and set it in stone.

But which stone to use? In Maine, there’s plenty of good local granite and slate (Sigrid’s favorite stone to carve), and nearby Vermont has the famed Danby Quarry with its beautiful soft marble. Sometimes, clients arrive with a preselected headstone, like the woman who brought her mother’s marble pie slab. “She told us that her mother had used that pie slab every single Sunday, so she wanted to use it for her headstone,” remembers Sigrid. “What a meaningful thing.” Although the inch-thick, white-gray kitchen tool “wasn’t a high grade of marble,” according to the letter cutter, “it was fine to cut into.” A few years after they finished this commission, they returned to the same stone to add the name of the client’s father before reinstalling it in the cemetery. “It was really special,” she says.

Talking to Sigrid, I get the feeling that all their projects are that special. There’s the woman who wanted “Gone to the Bahamas” carved on her own tombstone in a handwritten font. “I don’t know what that means,” laughs Sigrid, “but I assume she loves the Bahamas.” Another client brought in the epitaph “marvelous opponent and best friend.” “It’s such a warm statement,” says Sigrid admiringly. For this marker, they chose a font that was slightly italicized, with a little slant to add softness to the stone. Some of their work is more sculptural, like the small white lambs traditionally used to honor children. “I’m really focused on studying ivy right now,” says Sigrid, who enjoys the challenge of botanical forms. Sometimes, they carve mobile memorials, smaller stones with a message of love that the bereaved can take with them wherever they move. “That’s not something I come across very often,” she explains. “But a stone is a symbol. It’s a place to be, to reminisce. People can put them on their hearth or in their garden.” One person wanted a headstone that he could bring with him to Japan, so that he could visit the memory of his parents even though he was thousands of miles away from their remains.

That’s the power of a stone. Every headstone is a metaphor. They stand for the person who is no longer here; they provide a physical presence when a body is gone. “There’s a reason we don’t mark graves with wood,” says Sigrid. “Stone holds up.” Someday, Douglas says, Sigrid will carve his headstone, just like he carved one for his parents. Someday, Sigrid might even carve her own headstone (black Maine slate, small, with her husband’s name next to hers). “The mentality of our country is to pave over things and move on. But there are ways to remember things,” she says. “Most stones will lose their line eventually, and people will have forgotten you. But you’re still there. Your memory is imprinted into the stone.” 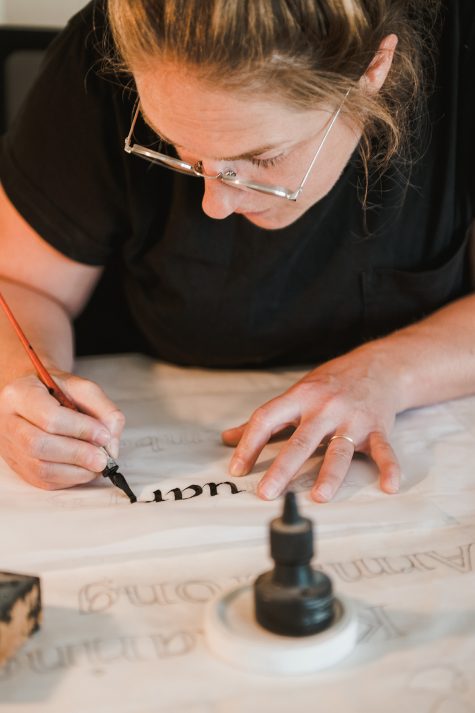 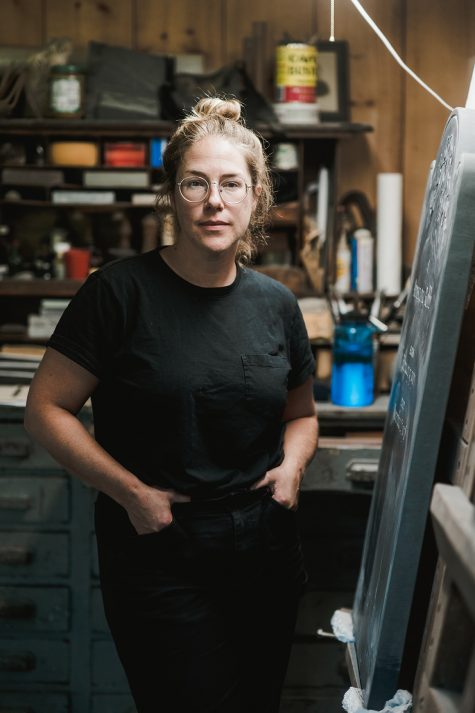 Lettercutter Sigrid Coffin stands in front of a hand-cut tombstone. While every headstone was once carved by hand, the mechanical age has largely destroyed the industry. In America, only a few dozen stay the course. 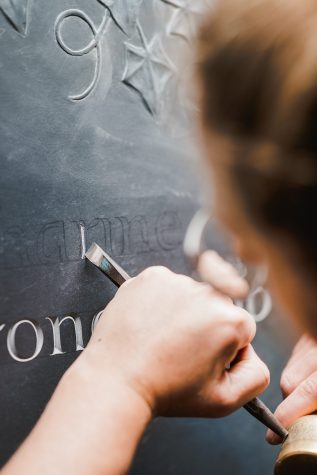 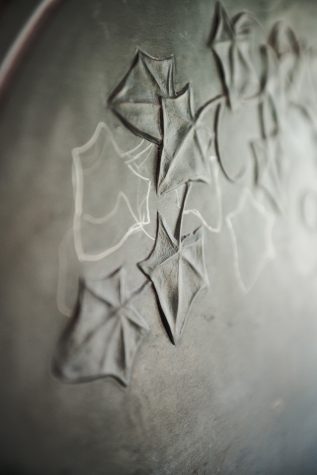 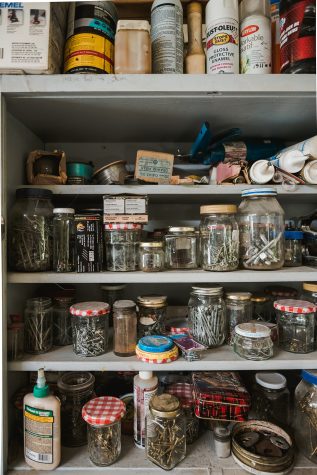 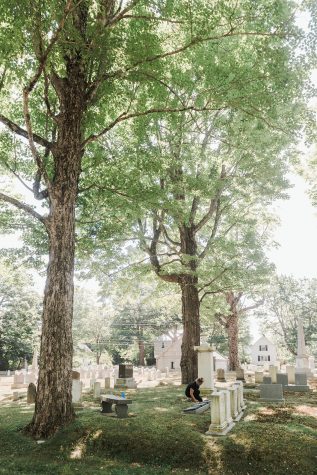 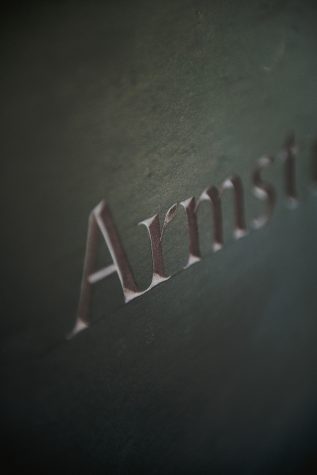