Inspired by the curves of your back teeth, this iconic settee blends furniture and sculpture

October, 2022 | By: Danielle Devine | Photography: Courtesy of R and Company 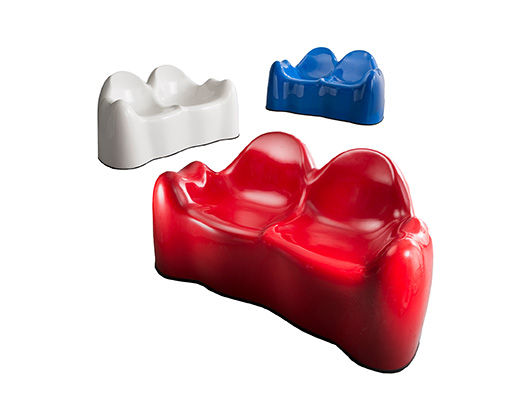 Castle is renowned both as the father of the American studio furniture movement and for his playful organic forms. He is prob-ably best known for his use and development of shaping solid, stack-laminated wood furniture and sculptures, an idea he got as a young boy while flipping through his father’s issue of Popular Mechanics. In the Popular Mechanics article, they showed readers how to make their own duck decoys (but this is for another Design Lesson). Our focus is on Castle’s plastics. Like Benjamin Braddock in the movie The Graduate, he truly knew the value of the material. He started making his glass-reinforced polyester and gel-coated plastic editions in 1968. Castle found working with synthetics liberating—they reminded him of the bright colors of automobiles during his childhood.

Evan Snyderman, principal of R and Company, first met Castle at the age of 10 through his parents, who were Philadelphia-based furniture dealers. He has written several publications on Castle, has collected and sold his work, and above all was Castle’s friend. When I think of Castle, I think of Snyderman, so obviously I had to contact him for this lesson. “The Molar settee is one of the most iconic designs of the series that grew out of Wendell’s desire to create multiples using fiberglass and car paint in the late 1960s,” reveals Snyderman. “The blue settee shown in this photo came from Wendell’s own collection and spent decades on the lawn in Rochester, New York, before we acquired it.”

Castle was known for blurring (or sawing) the line between furniture and sculpture. “I invent, distort, deform, exaggerate, compound, and confuse as I see it,” he proclaimed in 2016. The pieces in the Molar Group were made using a mold and did not bring in much money back in the late ’60s and early ’70s. They originally sold for about $150, although they are worth over $5,000 today. “The design, like many of Wendell’s works, avoids the use of legs and instead uses volume to create form,” says Snyderman.

Castle’s career spanned six decades, during which he changed the way we think about and make furniture. Castle passed away at age 85 in 2018 and right up until his death he was creating new pieces. Some experts say that during the last decades of his life he achieved some of his most ambitious work of his career utilizing twenty-first-century digital technology.