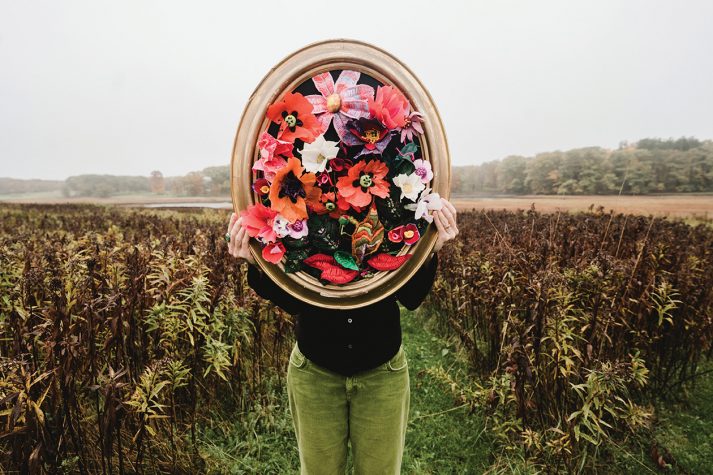 Artist Juliet Karelsen holds her 2022 sculpture, "Red Flowers in Gold Frame," while standing by the sea in southern Maine. Before becoming a fine artist, Karelsen was an art therapist in Farmington. It was “great, inspiring,” she says, “but also really heavy.” 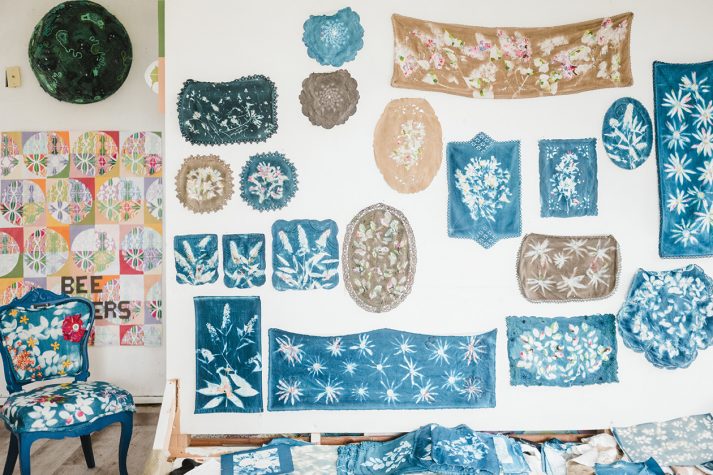 Inside her studio, Karelsen has pieces from her newer body of work with cyanotypes. On the wall, a 3D work, "Dark Green Nature Dome," can be glimpsed hanging above her chair. 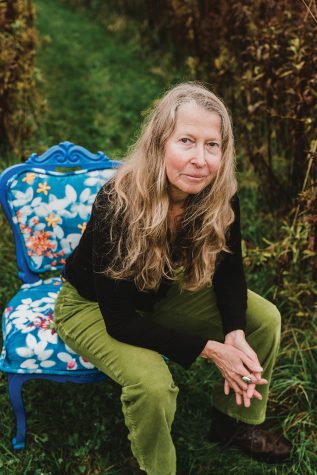 Sitting on a piece of her own work: "Flowers Bees Love Cyanotype Chair (Mixed Bouquet)." Embroidery on cyanotype upholstered on antique chair, 2021. 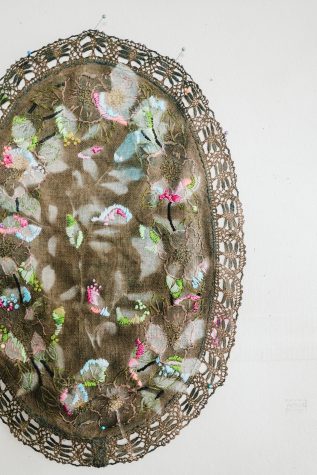 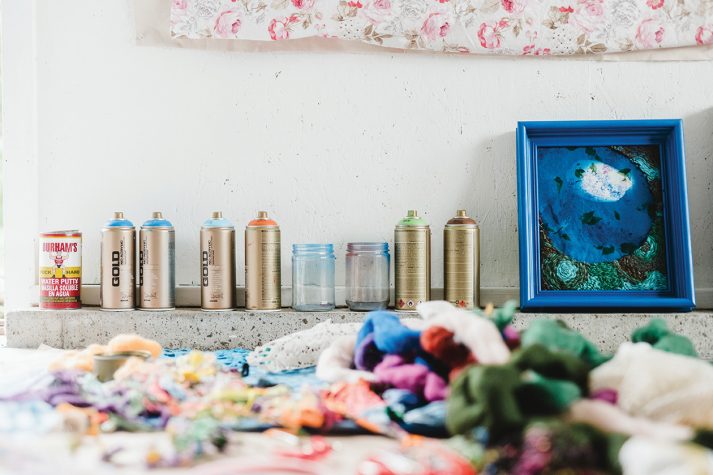 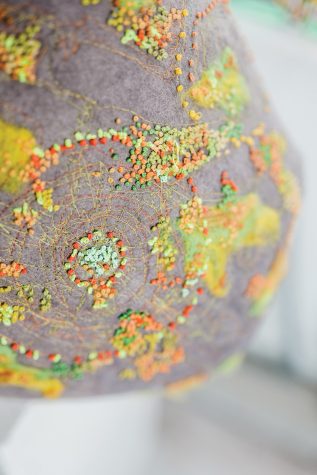 When Juliet Karelsen was a little girl, she got a dollhouse. This isn’t surprising—most children play with dolls—but Karelsen’s miniature world would play an outsized role in her life. Her mother, an actress, started the project when, during her downtime, she made her daughter a “rudimentary” dollhouse from a thrifted bedside table and some contact paper. Karelsen added to the structure using orange crates and handmade furniture, which she supplemented with miniatures purchased from FAO Schwartz. “I was obsessed,” Karelsen says. “I made everything for it.”

“My dollhouse was quirky,” the artist recalls, getting out a vintage book from under her worktable. As she flips through There’s a Decorator in Your Dollhouse by Melanie Kahane, Karelsen stops to point out certain DIY projects she completed as a kid. “I made all this stuff, following her,” she says, stopping on a page that explains how to turn an empty spool into an end table. “There’s a link here—between the domestic and my art.”

Located inside a converted garage outside her Scarborough home that she shares with her husband, writer Bill Roorbach, Karelsen’s white-walled studio is packed with pieces, every surface covered in color, texture, and detail. It’s not an overtly domestic scene, though once you look closer you begin to see the common threads. On one wall, there’s a series of expertly executed needle-point portraits, including one of her mother and another of of Jerry Garcia of The Grateful Dead. Nearby sits a series of soft sculptures on plinths: gray boulders embroidered with emerald moss and sage green lichen. Another wall is covered in bright blue cyanotypes. Pink and purple quilt-inspired prints hang under a series of framed fabric flowers. The floor is home to a spread of found items, ready to be incorporated into future works. There are scraps of fabric, faded doilies, dried flowers, strings of beads, and cans of spray paint.

“I was trained as a painter,” Karelsen notes early in our visit. “For a long time, that’s mainly what I did.” In 2015 she signed up for a stitching and painting workshop at Haystack. “It changed my life,” she says. The following year, she went back to Haystack, this time for a 3D workshop under artist Susie Brandt. “I had never done 3D before,” Karelsen says. “It seemed scary and uncomfortable.” But she soon found it freeing to play with miniatures again, like she had as a child. She began making a series of rocks stuffed with fibers and dried lentils and decorated with spikey lichen and star-shaped moss. “I started to access this part of me that reminded me of childhood—I was just playing and figuring it out,” she recalls.

These days, Karelsen dabbles in all media, from painting to printmaking to sculpture. She has expanded and broadened her artistic practice. “I love painting,” she says. “But when you’re painting, there is so much tradition and history hanging over you. It can feel heavy and as if everyone has said what there is to be said. Which of course isn’t true: there are plenty of artists making new and innovative work today. But it felt like that for me.” She also remembers looking at the vast array of materials on display at art supply stores and feeling both drawn to the “flashy” bins of beads and silks (“I thought, why can’t I use that?”) and slightly distanced from them (“What’s the story there?”). Through her courses at Haystack, Karelsen realized that she could change her medium without losing the sense of intimacy and illumination that she had developed in paint. “Alone, that stuff might not have a lot of mystery,” she says, referring not only to the the felt, crepe paper, pipe cleaners, and the colorfully printed quilting scraps, but also to the items she sources from thrift stores. “An afghan is an afghan. But you cut it up and paint it blue, and it could become a textured landscape.” Art allows for transformation; craft is part of a larger process.

In working with found objects, Karelsen isn’t just seeking to elevate them from the domestic sphere. She’s also working to show the complexity they already have—the meaning that exists within a crocheted afghan. “Women’s work,” she says. “Women have stitched for so long.” Yet, while she recognizes that there is a difference between making art and making objects for daily use, Karelsen feels that her pieces have a purpose. “There’s an environmental value to the old objects,” she says. “There’s a connection there to flowers, too.”

For her, flowers are symbols of beauty, pleasure, and the inter-connectedness of the natural world. Although they are overwhelmingly joyful and bright, Karelsen’s drive to create such lush blooms comes (in part) from a fear of climate collapse. After her time at Haystack inspired explorations of the nearby moss and lichen, Karelsen returned home to Scarborough and began to shift her focus to the fragrant Rosa rugosa bushes that line the coast and their attendant army of honeybees. “Flowers Bees Love” is the name for her ongoing body of work, which includes the cyanotypes she’s been tinkering with. It builds off her other small sculptures, needlepoints, and prints, including the trippy kaleidoscope-inspired flower mandalas and the intimate, contained world of her terrarium pedestals. “When I was doing the lichens,” she reflects, “one of the things I loved to hear people say was that [my sculptures] made them look at the forest in a new way.” Her pieces may show pretty, crafty things—renderings of rosebushes, honeysuckle, sunflowers in lace, beads, color—that are often regarded as unserious or childish, but there’s a gravity to this woman’s work: Karelsen’s art speaks to the possibility that all small wonders could someday disappear. “I don’t want to go into the destruction of habitats, the scary things happening, the negative,” she says. She has no plans to start embroidering dystopian scenes. Instead, she is trying to open viewers’ eyes to what magic might fade if humanity continues along this path. “This is my way of getting people to honor these things, the flowers and the bees,” she says. “I want people to pay attention.” 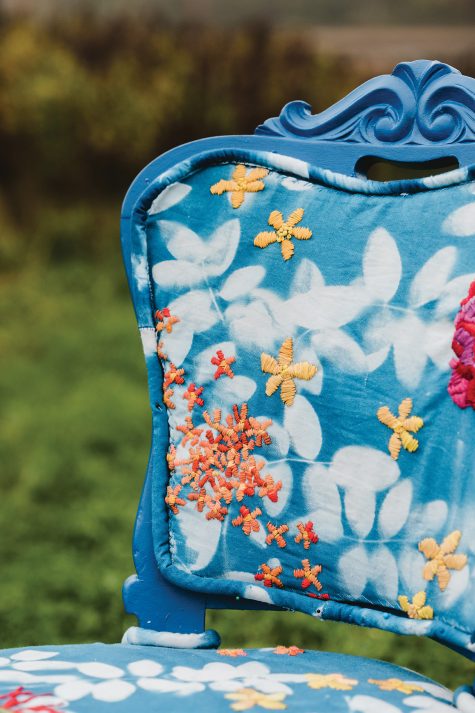 The same impulses that made Karelsen want to make an intricate dollhouse as a child has driven and informed her work as an adult. 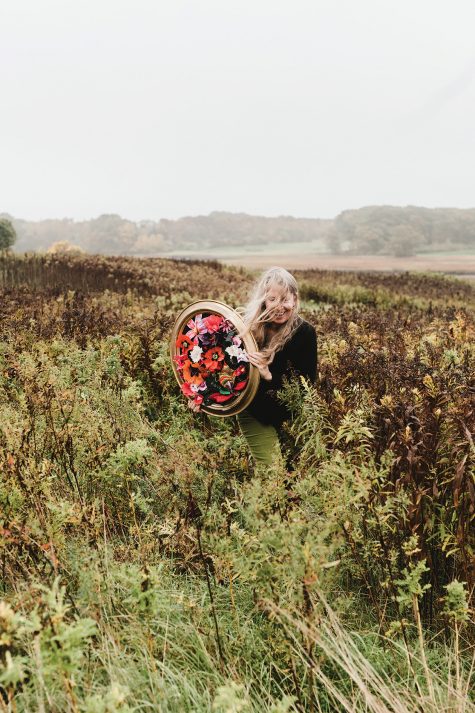 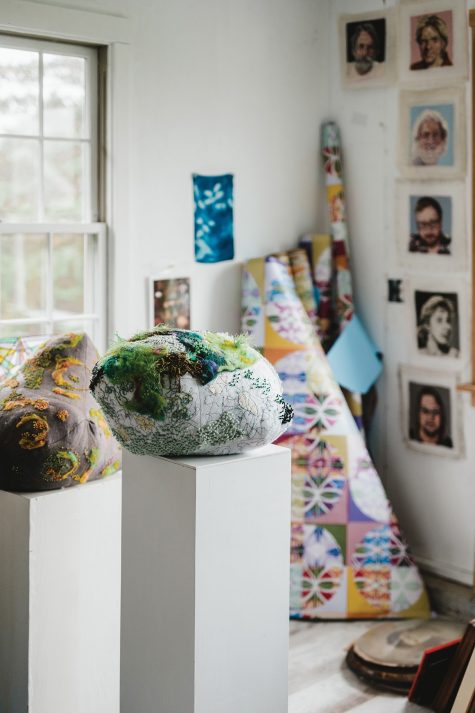 These lichen-covered boulders were some of the earliest 3D pieces Karelsen created during a class at Haystack. On the wall behind, her "Needlepoint Portraits."