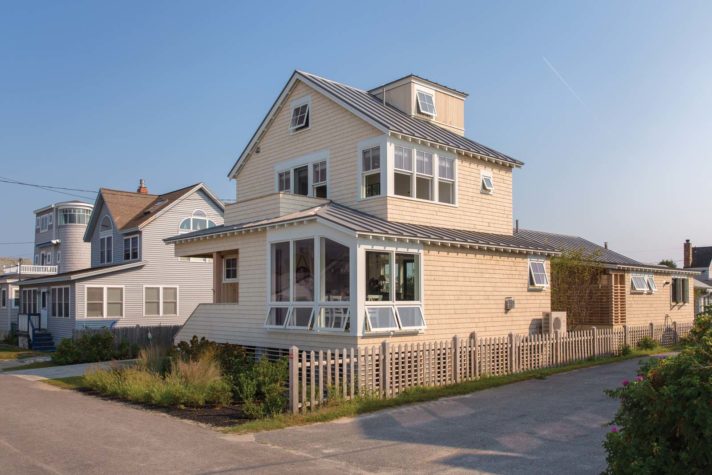 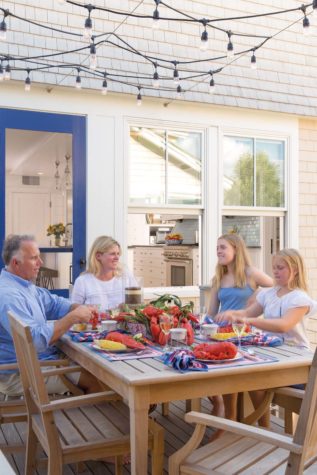 The Seaver family enjoys a lobster dinner on the ipê deck that serves as bridge between their Higgins Beach property’s front and back cottages. (Before the renovation, one had to go down a set of exterior stairs and up another to travel between the two houses.) Although the deck could not be given a roof per local ordinance, Russ Tyson of Whitten Architects still wanted a way to illuminate the space, so he chose to wrap string lights around stainless-steel cables strung at what would be ceiling level. 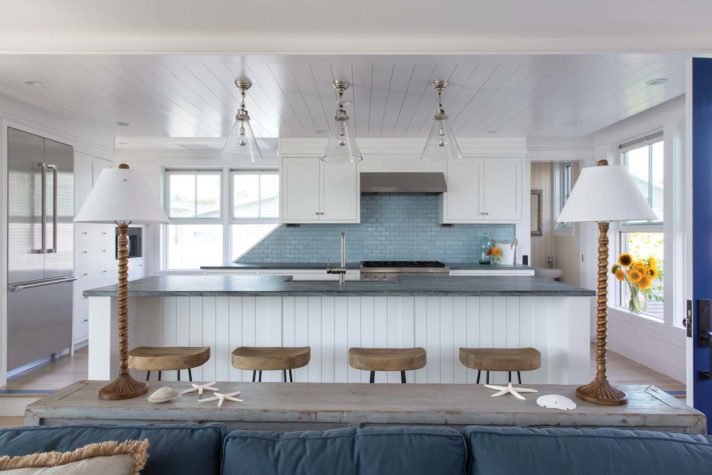 The kitchen’s backsplash tiles from Old Port Specialty Tile determined the color of the rest of the room, which (aside from a powder room) consists of the whole of the front cottage’s downstairs. A slight drop in the kitchen ceiling, as well as a step down from the kitchen to the living area, allows the room to be visually delineated. Custom cabinetry (here and elsewhere in the house) was done by Greg Soper Woodworking. The drawers to the right of the refrigerator are actually a faux front for a pull-out pantry. 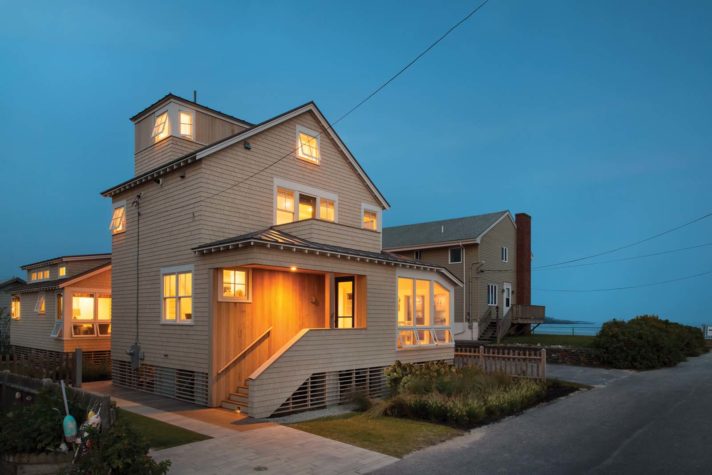 The front cottage with the tower is connected to the back cottage with a shed roof via a deck bridge. Plantings include grasses and native shrubs such as bayberry and beach plum. Both houses are built on concrete piers. In the event of a flood, slats would allow water to flow underneath. 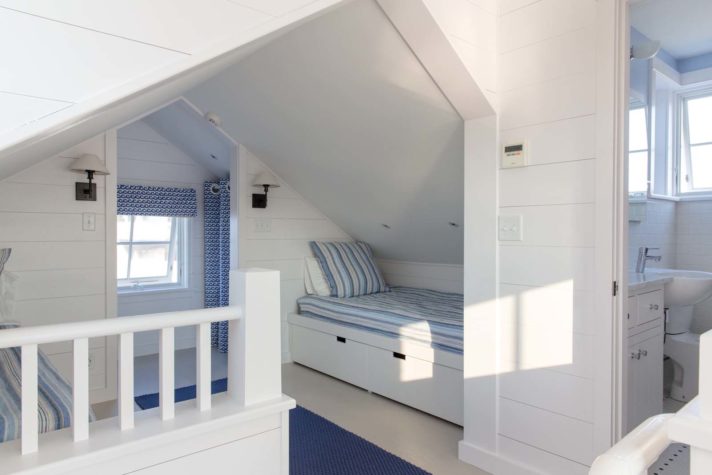 Every inch of the home is used for something, as is evident in the third-floor landing. Once an attic space, this level now has a bathroom and two built-in beds, one with storage below and the other with a trundle bed. 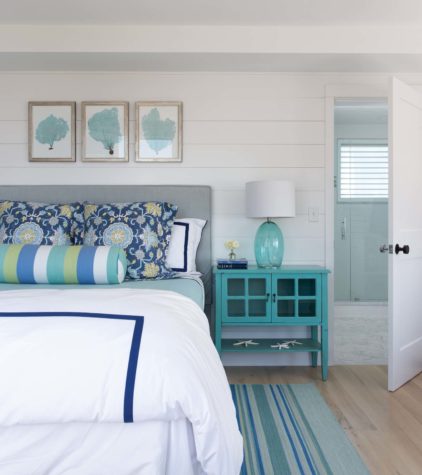 The lamp and side table in the owners’ suite are from a previous house. The other items are from Hurlbutt Designs. The nickel-gap paneling on the back wall was used liberally in the front cottage and more sparingly in the back cottage. 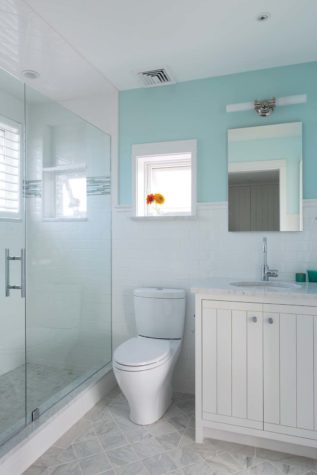 The vanity in the owners’ bathroom is by Greg Soper Woodworking. 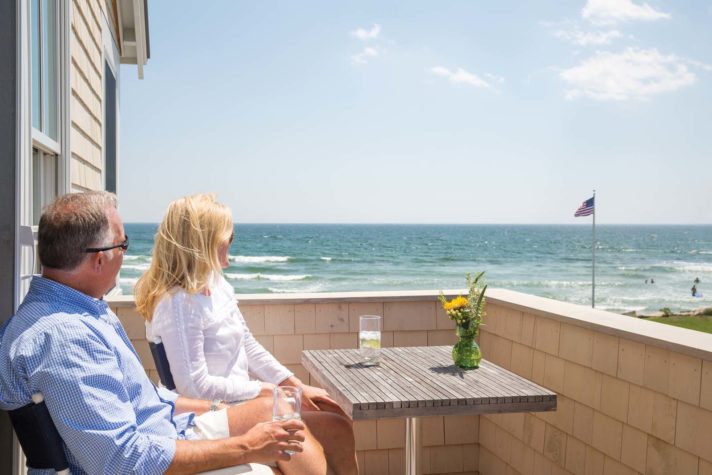 The Seavers look out toward Higgins Beach from their bedroom balcony. 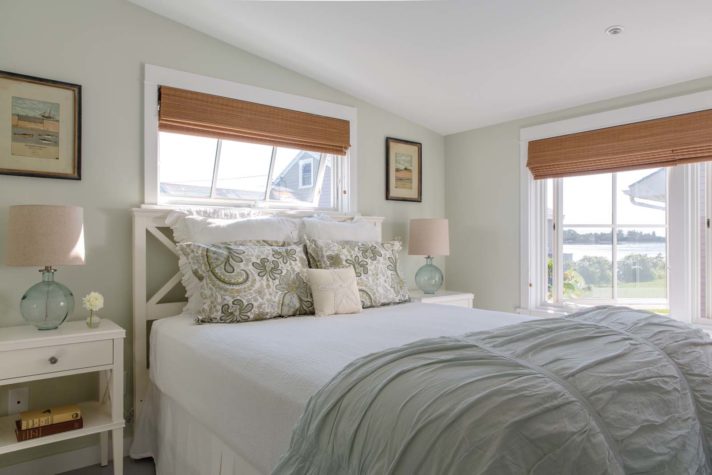 A guest bedroom in the back cottage has windows on two walls, something that Whitten Architects does as much as possible for both light and cross breezes. 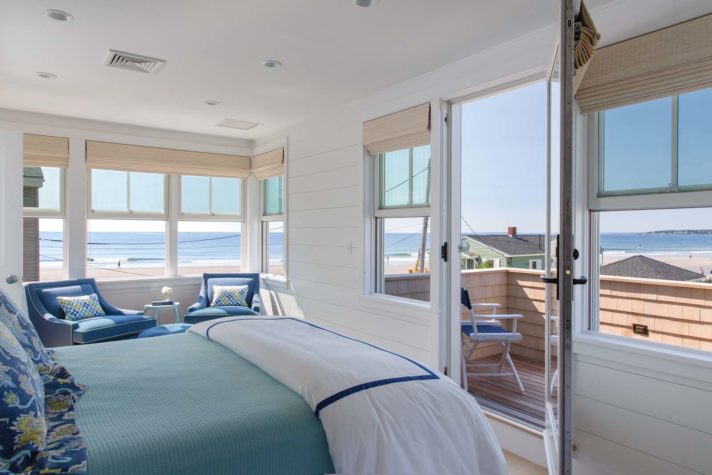 The owners’ bedroom has a pair of Mitchell Gold and Bob Williams chairs and woven roll-up shades. 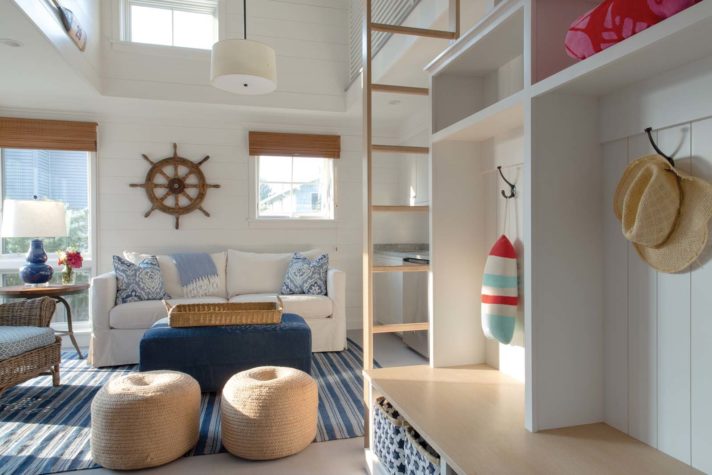 Above the back cottage’s cubbies is a ladder to the loft. A small kitchenette is in the background, and to the right are three guest bedrooms. “We used a lot of blue and white, as well as subtle nautical hints, such as an antique ship’s wheel, rope mirror, and small seashell mirror,” says Sandler. 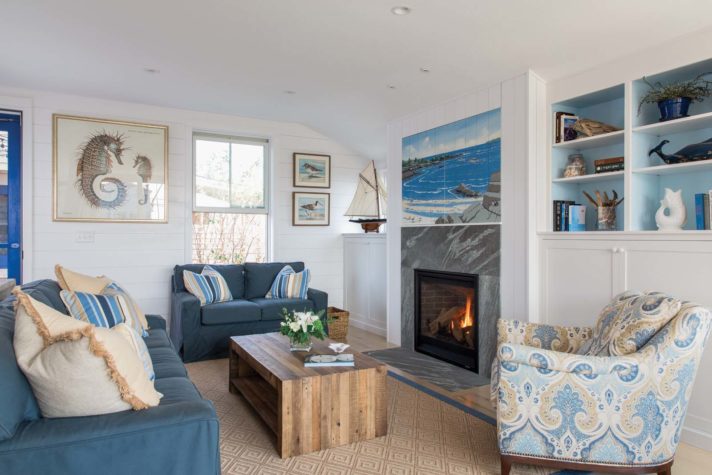 The living area mural is by Susan Amons and hides a television while depicting what would be seen out the window, if there were a window above the fireplace. The Seavers wanted child-friendly, easy-to-care-for furnishings. The couches are slipcovered, and the indoor/outdoor rug with a navy border can be hosed off. “We also wanted to add some natural elements,” says Sandler. “So we chose a reclaimed wood coffee table and throw pillows with jute fringe.” 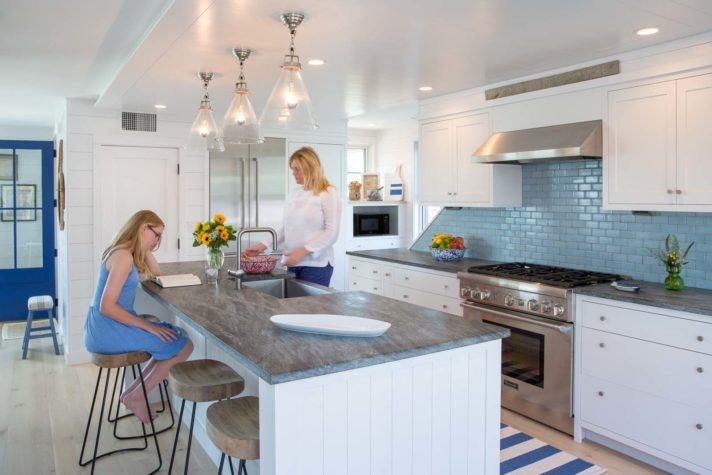 For years, Jennifer and Jeff Seaver had been thinking, in a casual way, of buying a house at Higgins Beach. Jeff had visited the Scarborough community of tightly packed beachfront cottages since he was a boy. “Every summer,” he says, “it was the destination vacation, a special place for my brothers and me.” When Jeff married, the tradition continued with his own children summering on the coastal stretch popular with year-round surfers, sunbathers, strollers, and those curious about the ship’s ribs visible at low tide, evidence of an 1897 wreck. Although the number of weeks the Seavers spent in Maine had increased over the years, they had always been renters. Then, in 2011 the family moved from Chicago to London for Jeff’s work with an asset management company. The longtime desire for a Higgins Beach cottage dovetailed with the couple’s wish to have a base in the States. “This could be great,” Jeff said to Jennifer. “We could come back from London and still have a place for family and friends to connect.”

The property the Seavers found was curious: two small cottages on a 50- by 100-foot lot with ocean views. An early postcard of the original summer cottages, which were named “Life Saver” and “Ship Ahoy,” shows two single-story homes with white clapboard siding and black asphalt roofs whose front doors faced the ocean. The president of the Scarborough Historical Society, Rodney Laughton, who knows the Higgins Beach community well, says the cottages were summer rental properties, surplus buildings (likely from the South Portland shipyard area) that were moved to Higgins Beach after World War II, when they were no longer needed to house wartime laborers. By the time the Seavers bought the property, the houses had been reoriented to a street that runs perpendicular to the ocean. The front cottage was two stories and recently renovated, while the back cottage was one story and in need of significant repair.

Architect Russ Tyson of Whitten Architects in Portland and builder Josh Morrison of R.P. Morrison Builders in Windham faced a challenge: zoning, frontal dune, and
floodplain regulations make renovating on Higgins Beach complicated. On certain lots, the footprint of an existing house cannot be changed, and there is little wiggle room for altering the volume. The Seavers wanted to fit a great deal into the limited space, in no small part because they hoped to host frequent guests. “It felt like we were building a ship,” says Jennifer. “Every inch needed to be thought about.” Another difficulty: the building was going to take place over the course of the (cold and snowy) winter of 2014/2015 and the Seavers would be able to visit the site only once during construction. “That made us a little nervous,” says Tyson. “We like to have the homeowner included in the process as much as possible.”

The front cottage was originally divided into several small rooms. The new design opened the ground floor into a “great room” with an adjacent powder room. It
also dropped the living and dining room floor six inches to improve the views and make the ceilings higher. (Previously, one had to “scrunch down,” as Morrison
puts it, to best see outdoors.) Two bedrooms on the second floor were joined into a single owners’ suite. The attic space was combined with a modest allowable expansion to create a third-floor tower with two built-in beds under the sloping eaves. (The Higgins Beach zoning quirk that allows for small additions on upper stories seems to account for the occasional rooftop curiosity in the neighborhood.) Meanwhile, the back cottage was entirely razed and rebuilt with cubbies in the entryway, a sitting area and kitchenette, three small bedrooms, and a shared bath. A ladder leads from the sitting area to a lowceilinged loft with beanbag chairs and more cubbies. The children call the space, tucked underneath a shed dormer with a row of clerestory windows, “the lobster fortress.” A western red cedar outdoor shower with a slate floor serves not only to rinse off beach sand but also as a second bath for the back cottage.

To meet code requirements, the back cottage needed to be rebuilt on concrete piers, which Morrison then hid with western red cedar slats at the base of the structure.
Flood waters, should they come, will now wash under the house, rather than sweep the house away. The new concrete piers raised the back house up to the level of the front house—which had been lifted in an earlier renovation—and thus became part of an overall effort to integrate the two cottages, visually and practically. A deck that serves as the outdoor dining room bridges the two buildings, which are also united by palette, materials, and design.

Inside, interior designer Ilyse Sandler of Hurlbutt Designs in Kennebunk decorated with blue and white, a palette that Jennifer loves. The kitchen backsplash tiles
are powder blue, the upstairs bedroom chairs are navy with aqua piping, the living room rug is sisal with a navy border, and so on. The materials are classic—white oak for the floors in the front house, painted yellow pine for the floors in the back house, white nickel-gap paneling for many of the walls, and Maine granite for the kitchen island and fireplace surround. Outside, shades of warm gray compose the palette, which is largely determined by the materials: white-cedar shingles, red-cedar detailing, ipê decking, concrete driveway pavers, red-cedar walkways (which feel particularly good underfoot), and standing-seam metal roofs. Native plantings include grasses, small trees, and shrubs such as bayberry and blueberry. While offering some screening for the property, the greenery is also designed to grow around the connecting bridge, so the deck will come to appear, in Jeff’s words, like it is “floating” between the two cottages.

Originally, the front cottage’s windows and its single balcony did not take advantage of the views. Now a balcony over a new entryway and off the owners’ bedroom looks directly onto the water, and windows have been resized and relocated. A corner of the ground floor always had windows, but the new ones are door-size, further opening the views. In order not to block sight lines with lighting, Sandler used glass pendants over the kitchen island and a nautically inspired iron-and-rope chandelier over the dining room table.

“The moment I knew we made all the right decisions—the moment that crystallized it—was when the kids arrived at Higgins Beach the first summer after London,” says
Jeff. “They were so happy, they were crying. It meant so much to them, to know that they were home.” Since their pair of houses was renovated, Jeff and Jennifer have moved from London to Dallas and are now headed for Pasadena, California.
“We wanted to create a sense of permanency for the children,” says Jennifer of the Higgins Beach house. But it’s more than stability that the Seavers are after. Their landscape designer, Emma Kelly of Buxton, perhaps put it best when she described what she felt the Seavers were asking her to do with the grounds: “They wanted to create a landscape that would complement a muscle memory of childhood, that natural living, that rolling out of bed and going to the beach, that simplicity and ease.” A nostalgic idea, and yet one that appears to be in the Seaver family’s past and future. 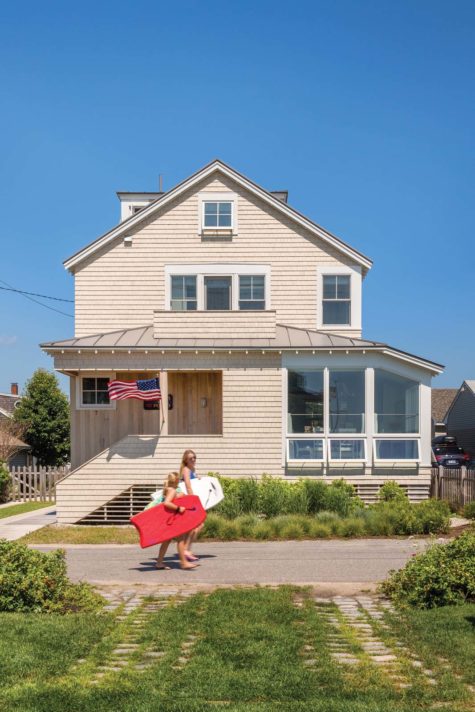 A new porch and entrance stole some of the front cottage’s interior footage but ultimately allowed for a more welcoming, covered entrance. Both the front and back cottages have eastern white cedar shingles and red cedar detailing, such as the vertical panels at the front entry. 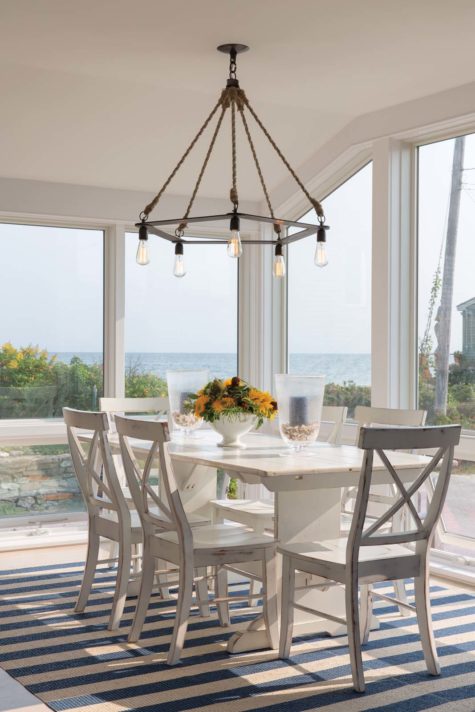 The best views to the ocean were on the corner of the front cottage, so where there were once standardize windows, R.P. Morrison Builders installed floor-to-ceiling windows. The chandelier creates visual interest without blocking the view. The table and chairs are from the Seavers’ previous home. The Seavers worked with Ilyse Sandler and Louise Hurlbutt of Hurlbutt Designs to choose the other furnishings, decorative items, linens, and pillows throughout the house. 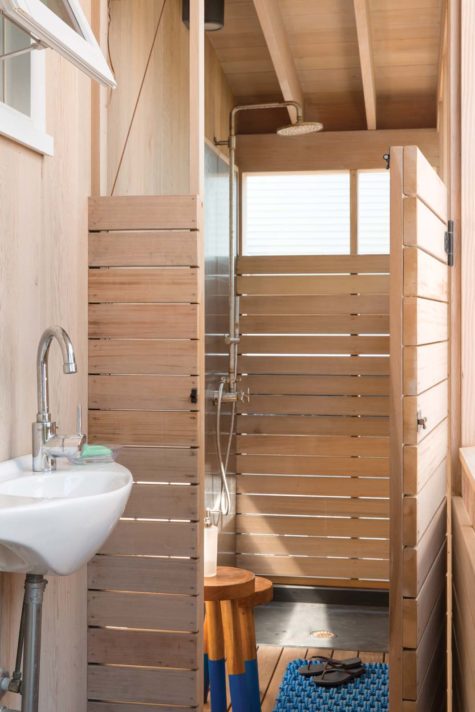 An outdoor sink and shower, has western red cedar walls and slate flooring.