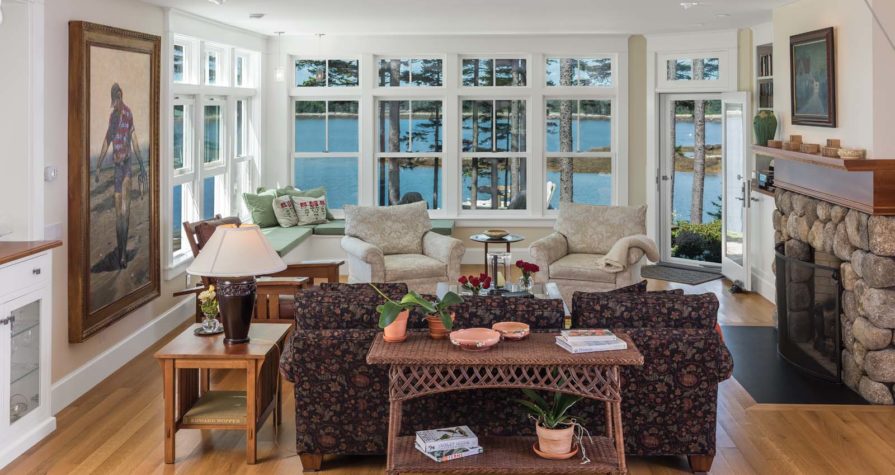 The living area of this Saint George peninsula home, designed and built by Phi Builders and Architects, faces west so that the homeowners can watch the sun set out its expansive windows. A corner window seat hides a low-frequency subwoofer installed by Tucker and Tucker. Daniel Bittner of Keystone Masonry hand-selected the fieldstones for the fireplace surround. “When the stones were delivered, they were covered in moss and lichen,” explains the husband. “The mason asked us, ‘Do you want the natural look, or do you want me to clean them up?’” 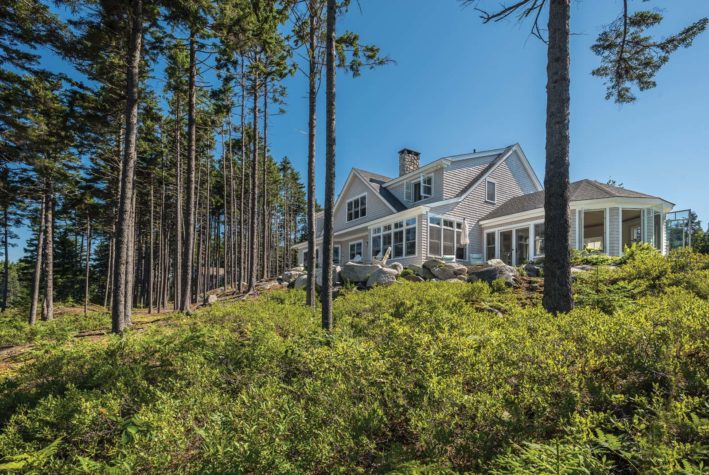 The home, viewed from its dock, fits into the landscape and is surrounded by huckleberry. 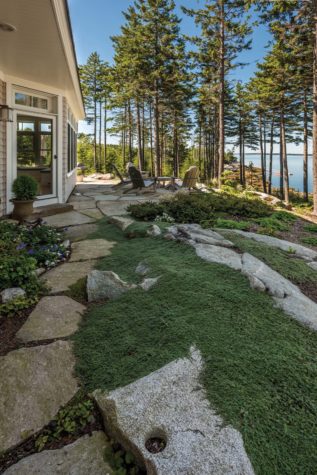 Native plantings have filled in around the ledge, which initially made building on the site a challenge. 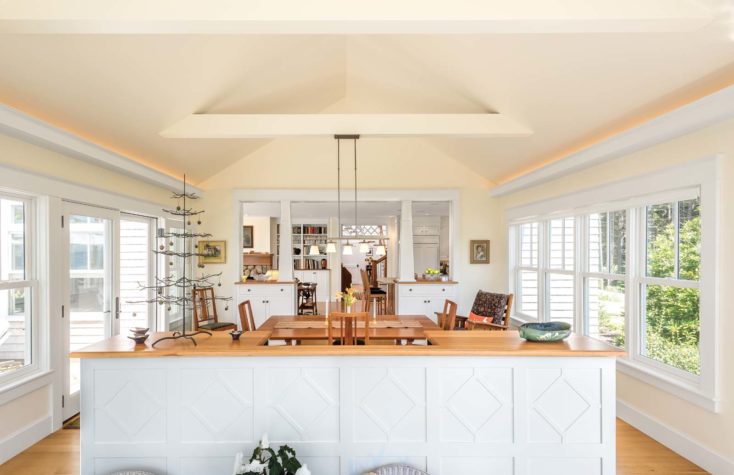 “We were able to do a formal, old-fashioned dining room”, says the husband, “But the space is not old-fashioned by any means, with the vaulted ceilings.” Cove lighting runs along three sides of the space, which connects to the sunroom. The diamond-shape detail on the back of the sideboard, which is topped with cherry, also appears on the home’s transom windows. 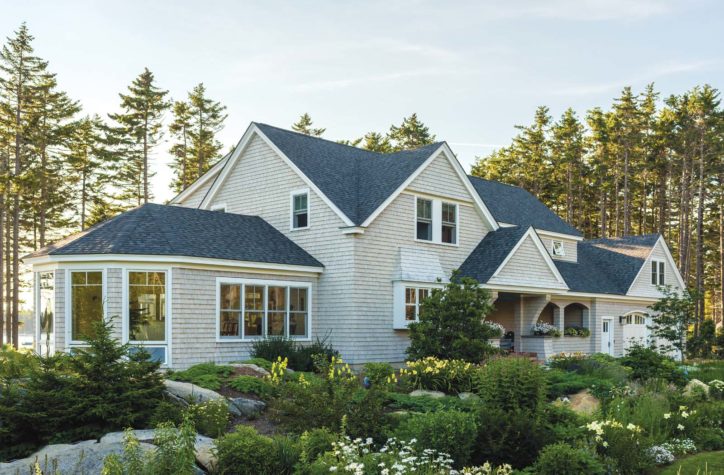 The homeowners are avid gardeners. 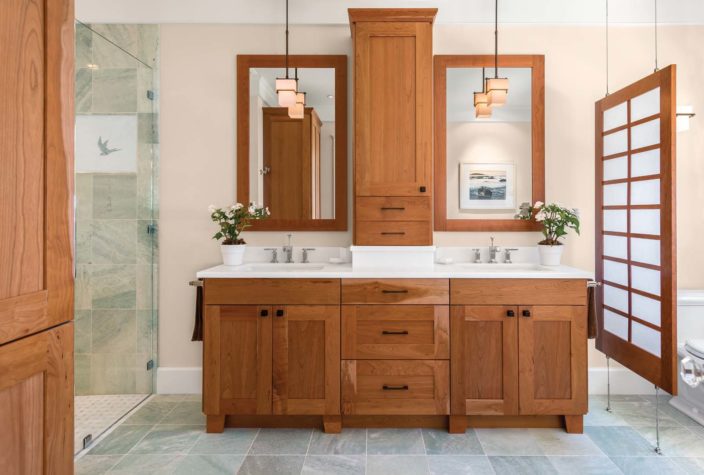 In the owners’ bathroom (above), a shoji screen—just one of several of the home’s Arts and Crafts design elements—creates privacy while giving a feeling of airiness. The Hubbardton Forge pendants are from Fogg Lighting. The tile from Distinctive Tile and Design was installed by Scattoloni Tile Co. 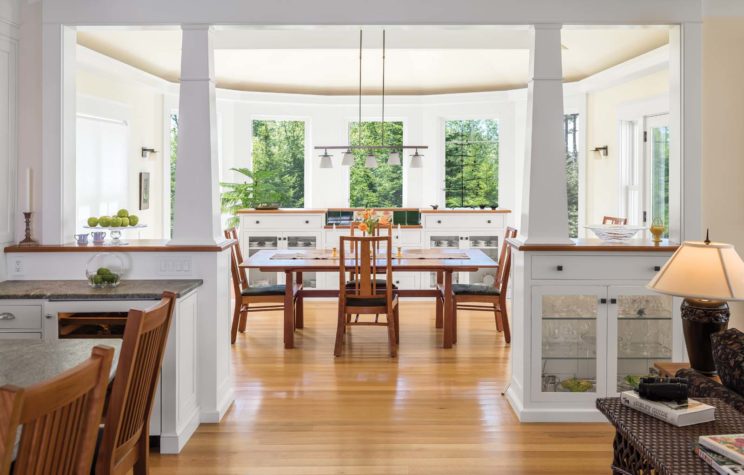 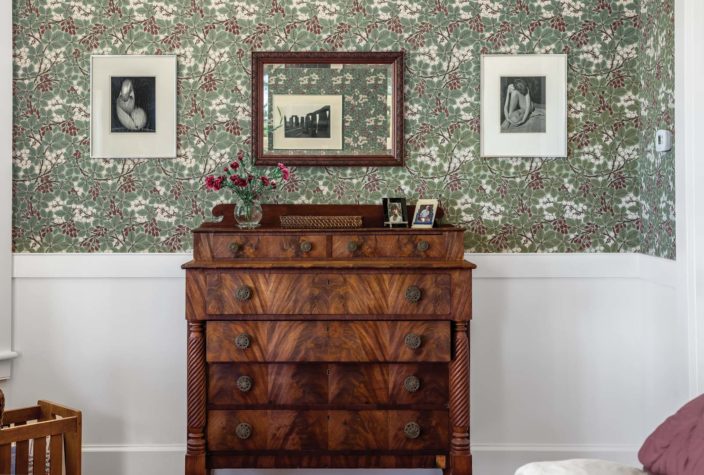 In the owners’ suite, the photographs on either side of the Empire dresser are by Edward Weston; the piece in the center is by Paul Caponigro. The hand-printed wallpaper is from Bradbury and Bradbury Art Wallpapers. 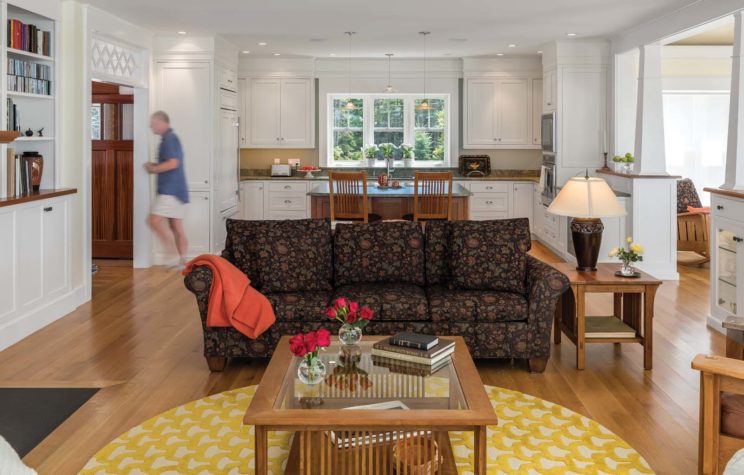 The living area is open to the kitchen, which was designed by Lynne Gushee, then of Dream Kitchen Studio and now of Crestwood Kitchens. The rug is by Angela Adams. 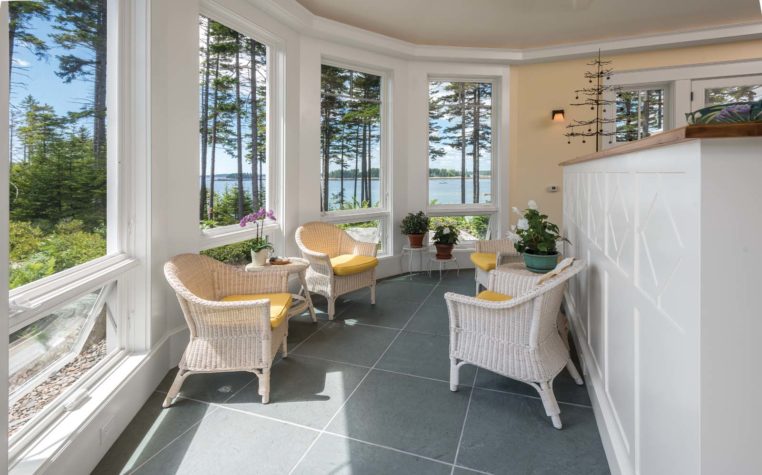 The sunroom has 180-degree views and floor-to-ceiling windows installed by Cioppa Construction, which also did the home’s framing. 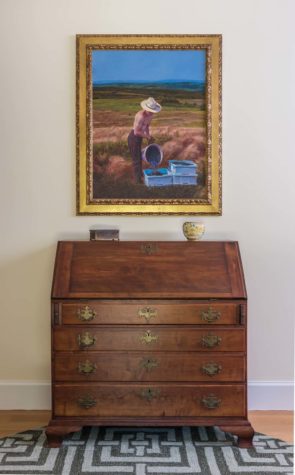 Ronald Frontin’s Blueberries hangs above an antique secretary in the entryway. 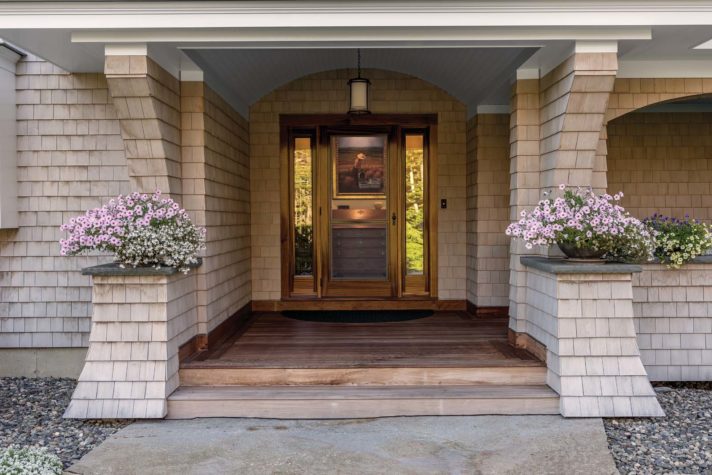 The home’s shingle-style exterior has a classic seaside feel.

A couple embraces decorative history with a light-filled arts and crafts-style home on the Midcoast.

Ever since the kids were small, this family of four would set off every summer for
two weeks of sailing. Eight hours after departing by boat from Cape Elizabeth, they would arrive at their first stop: Tenants Harbor. Two decades later, when the children were finishing up college and the father was retiring from his job as a commercial pilot, he and his wife found themselves back on the Saint George peninsula. There, they began searching for a spot to build a home where they could age in place, and from which they could sail.

Eventually the couple came across a picturesque, western-facing property, which would provide protected deep-water access for their Sabre 386 sailboat as well as views out to a pristine island land trust. The only hitch was that it consisted mostly of ledge, which had proved so difficult to build on that the previous landowners eventually put it up for sale. Fortunately, Rockport’s Phi Builders and Architects, whom the homeowners decided to hire because of their flexible, team-based approach, were up for the challenge. “As we started with the site, we walked a lot. We looked at it. Turned and twisted and pulled and stretched,” says architect Christopher Grotton. He eventually designed a four-bedroom, three-bath house that’s long rather than high, in order to make the home feel less imposing—a risk because of its siting on the raised granite mound. “We integrated the natural features of the site in such a way that you’re living with them and not living on them,” says Rob Troxler, director of construction services. Although mild blasting was required in order to get the foundation in place, the ledge was flattened just enough so that the home now seems neatly nestled into the wild landscape. There is only a small stretch of lawn, which the homeowners were adamant about because they wanted to be sensitive to the surrounding natural environment.

While the exterior is shingle style with Greek Revival trim, the inside feels airy and light filled, with views of the water from nearly every room. “It’s definitely a hybrid style,” says Grotton. “It’s got that seaside feel with the shingle style on the outside, but very much an Arts and Crafts aspect to the inside.” A hallmark of Arts and Crafts style is interaction with the outdoors, and the faceted, south-facing sunroom, which offers 180-degree views, doesn’t disappoint. While the team had originally tossed around the idea of a screened porch, they ultimately decided against it, as it would have meant blocking off views from the rest of the house. “Now the sunroom really becomes that four-season screened room,” says Grotton. With eight-foot-high windows that stretch nearly to the floor and the space’s slightly sunken feeling (it’s two steps down from the rest of the house due to the way the ledge had previously been blown out), it almost feels like being right outside. Native shrubs such as bunchberry, huckleberry, and blueberry surround it, and “there are little red squirrels that scurry by, which our dog tracks through the window,” says the wife. “We had foxes one year, too.”

Besides its strong visual connection to nature, the home’s Arts and Crafts style is perhaps most pronounced in the downstairs powder room, which is off the entry. The bathroom has mahogany wainscoting, a gold-leaf ceiling, and Bradbury and Bradbury’s hand-printed Lands End wallpaper, which features a row of silhouetted spindly trees, the sun shining from behind them—a scene that could very well be right outside. Additional decorative touches include a shoji screen in the owners’ bath that serves as a space divider and a tori-inspired wood gate on the boat dock. There are also several subtle nature and woodland motifs that run throughout the home, including poppies on the Art Nouveau–style tiles from Distinctive Tile and Design on the dining room sideboard and on the Stickley-inspired carved oak headboard above the reading nook in the upstairs office. (Ingeniously, the decorative pieces attach
to the wall with magnets so that they can be easily removed should the homeowners want to paint in the future.)

“When I think about Arts and Crafts, I think of each piece as telling a story,” says Troxler. “That’s how the homeowners expressed their whole house. It’s really the culmination of a bunch of pieces put together, and each one of them has their reason and history behind them.” In keeping with that concept, the home has numerous custom design elements that not only support how the couple live today but also keep
their future lifestyle in mind. As the couple’s hope is to age in place, the owners’ suite and laundry is on the first floor; doorways, which often have decorative woodwork, are wide enough to accommodate a wheelchair; and the owners’ bathroom is backed with wood boards so that it can be retrofitted with grab bars. Every upstairs room, which includes two bedrooms, an office, a media room, and a full bath, is individually temperature controlled, so that heating can be kept separate from the first floor of the home. In the loft space above the garage, bunks can be added for future grandchildren.

“There’s not one square inch of the house that isn’t custom,” says the husband. Because he is a music lover—his record collection measures 16 feet long when lined
up together—built-ins in the living room neatly store his entire collection. Nearby, a window seat not only serves as a cozy space to take a nap but also hides a low-frequency subwoofer installed by Scarborough’s Tucker and Tucker, who had done the audiovisual system in the couple’s previous home. Another personalized element is the layout of the owners’ suite. Because the husband’s career as a commercial pilot had made for odd hours, the bedroom closet is set up as a walk-through space so that he can leave the suite without waking his wife. However, things are different now that he’s fully retired. “For all the traveling that my husband did, since we’ve been here, we really have not been out of Maine much,” says the wife. “It is bizarre,” adds the husband. “I spent my whole life traveling on airplanes, and since we retired here five years ago, I’ve only been on a plane once, and I’ve only been out of Maine twice.”

Instead, the couple find themselves on a much smaller, slower, and markedly serene
circuit. “We actually make a tour sometimes through the house, because we love all these different spaces,” says the wife. “We love to go out on the front porch for our coffee, with the hummingbirds flitting by. We love to sit in the sunroom. We love to relax in the living room. We’re moving around the house throughout the
day.” After all, now that the couple can sail a boat out of their backyard, watch wildlife stroll past their sunroom, and catch the sunset from their living room window, why would they want to be anywhere else? 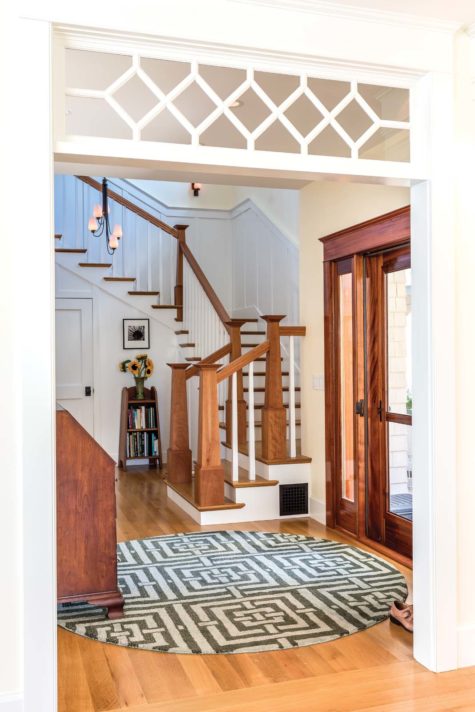 Arts and Crafts details in the entryway include wainscoting and a decorative transom. 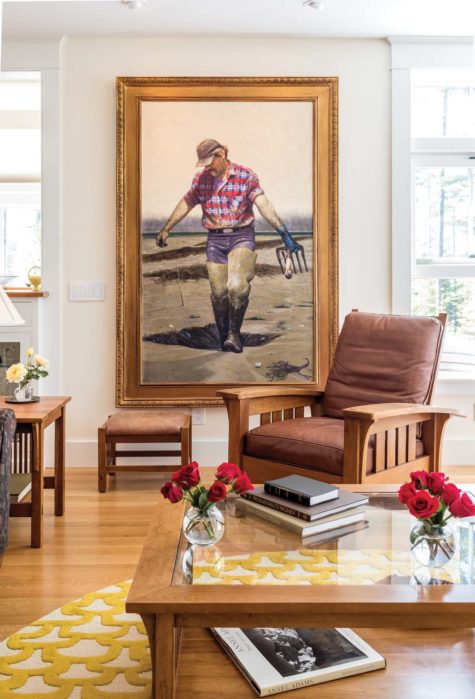 A painting by Ronald Frontin hangs above a Stickley chair in the living area. 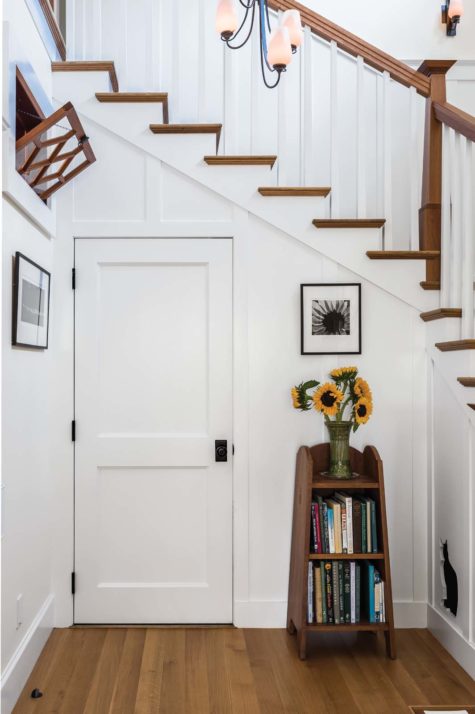 A transom lets light into the powder room from the entryway. The cat-shape cutout on the right is actually a tucked-away spot for the litter box.