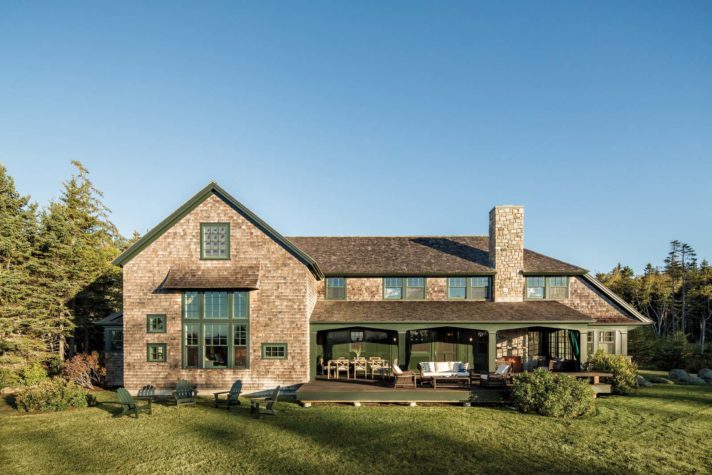 The last bay in the three-bay porch on the back of the house has a windscreen and outdoor fireplace, which allows the family to still enjoy the outside area on cooler nights. 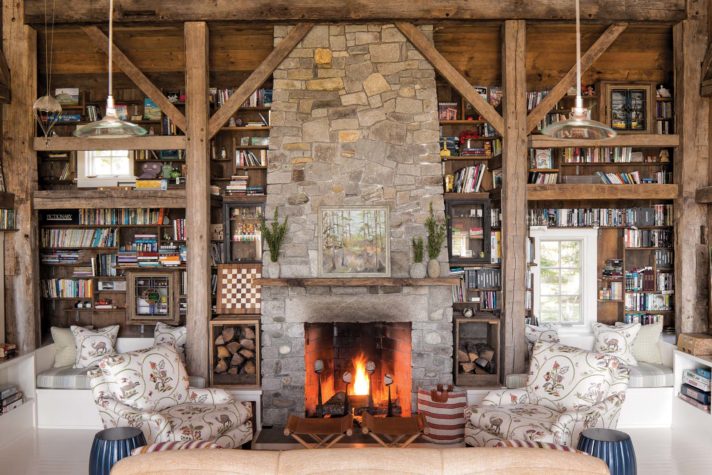 The hub of the house is the living room, which is filled with cabinets of curiosities and books from summers past. The built-in seats on either side of the fireplace were reupholstered with Cowtan and Tout fabric along with the two club chairs. Two Serena and Lily leather X-stools are conveniently placed in front of the fireplace for a quick warm up. 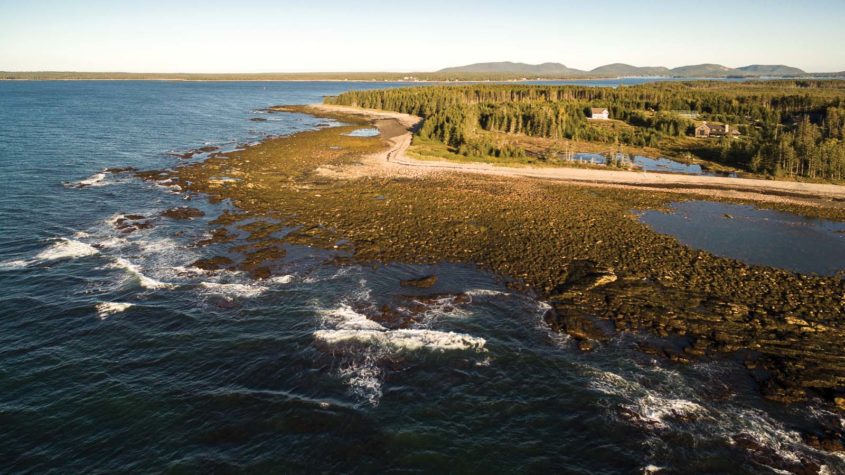 At a Great Cranberry Island home designed by Albert, Righter, and Tittmann Architects, decorated by Leandra Fremont-Smith Interiors, and built by Michael Westphal, days are spent at the beach swimming and collecting treasures from the shore. The mountains in the horizon are on Mount Desert Island. 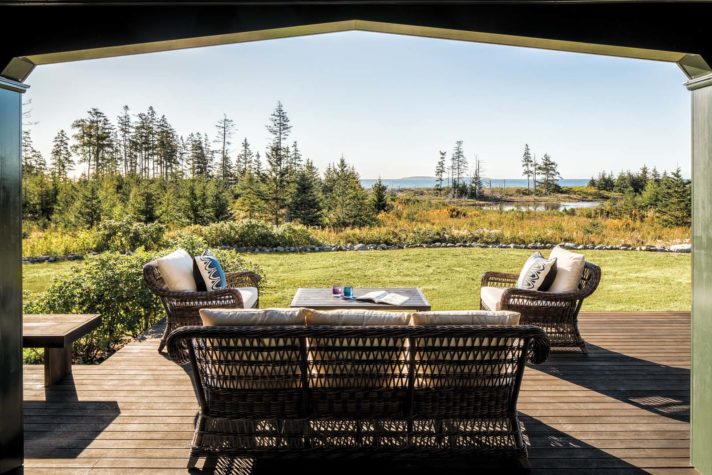 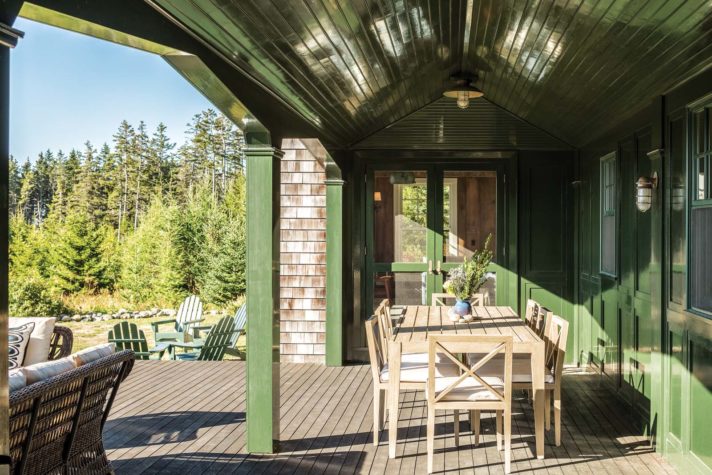 With Fremont-Smith’s addition of outdoor dining furniture, meals are now spent outside whenever possible. 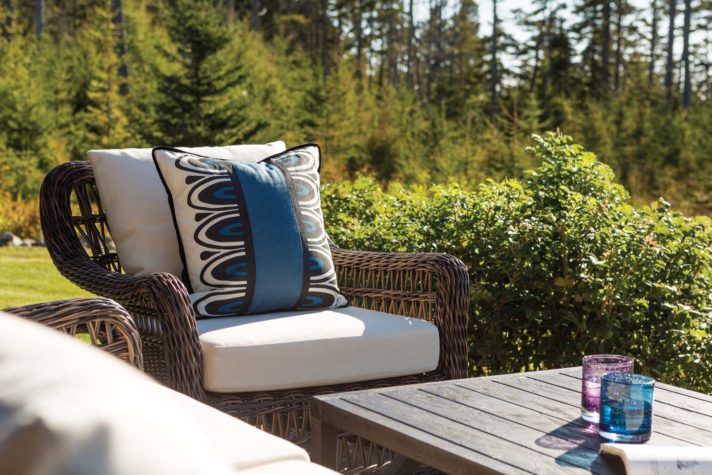 The outdoor throw pillows were made in Maine. 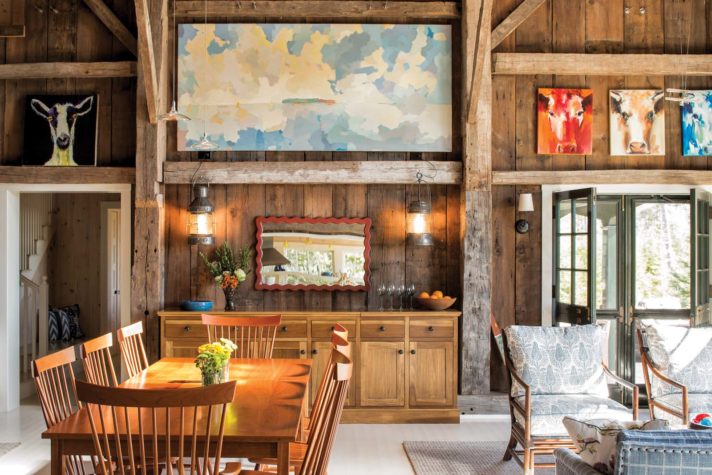 A goat and a group of cow paintings flank Henry Isaacs’s Baker Island, View from the South Shore, Great Cranberry. The dining table and chairs are Thos. Moser. 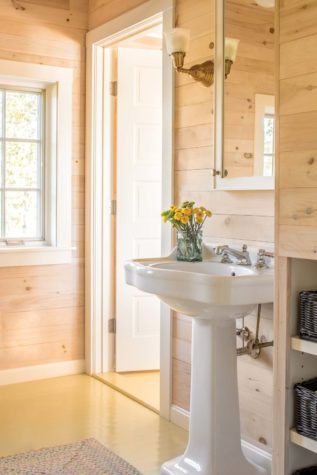 Light wood is used throughout the second floor to clearly distinguish it from the old, dark wood used for the barn. 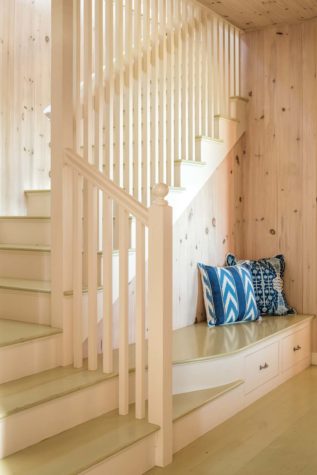 The treads on the stairs to the second floor are painted a light green along with the built-in seat at the bottom. 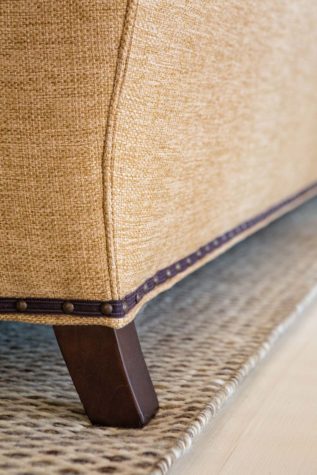 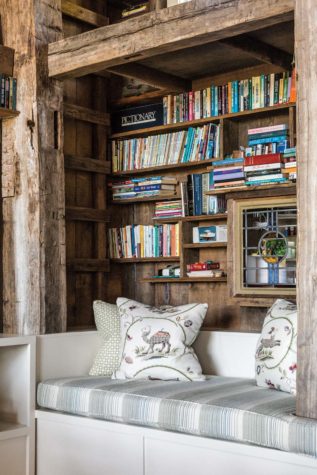 This reading nook in the barn has Tetris-like shelving. 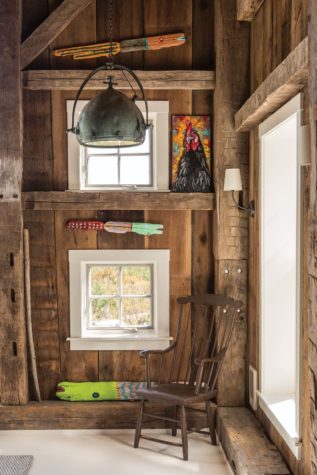 Neilson-Levin is always on the hunt for interesting paintings of barn animals, such as this rooster, to add to the house’s collection. 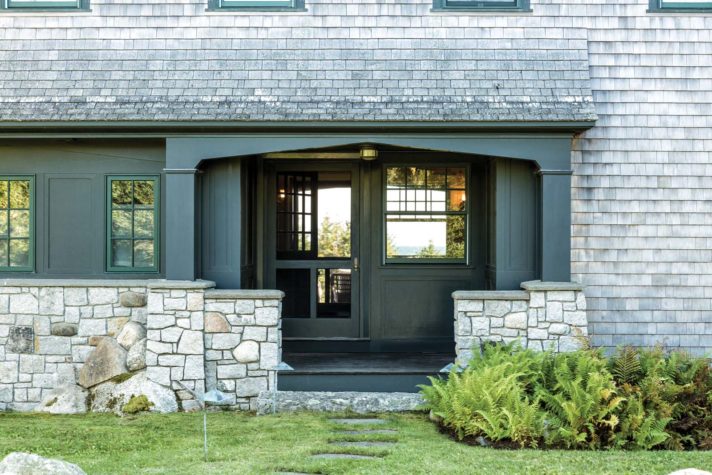 “I incorporated the stones and boulders that were part of the land and inherent to the island in the walls of the house”, says architect John B. Tittmann.

One woman on Great Cranberry Island takes the old and makes it new again.

Emmy Neilson-Levin spent some of the happiest days of her childhood on Great Cranberry Island with her three siblings. When she grew up and had a family of her own, she returned every summer to her parents’ home there. Over time Neilson-Levin’s parents acquired 50 acres on the island and gifted each of their four children a parcel of land. Later, although she and her late husband lived full-time in Seattle, they always talked about building a house from an old barn that they would relocate to their piece of property on the island. “I was given my marching orders when he passed away,” says Neilson-Levin.

Each summer, the same families return to the small islands off Mount Desert Island known as the Cranberry Isles (Great Cranberry, Little Cranberry, and Sutton). During most of the year, Great Cranberry is home to about 40 residents, but the population increases to around 300 in the warmer months. Neilson-Levin grew up riding the ferry and playing with “the Tittmann boys.” One of the brothers, John B. Tittmann, is now an architect at Albert, Righter, and Tittmann Architects in Boston. “I knew, if I ever decided to build a house on the island, I would have Johnny design it,” says Neilson-Levin. When she approached Tittmann about fulfilling her and her husband’s dream, she had only one criterion: the house needed to be centered around a rescued barn with hand-hewn wood from pre-sawmill days.

Tittmann remembered lumber his mother had stored away years ago. In the 1980s Lucy Tittmann had saved an old barn from demolition in Concord, Massachusetts. It was rumored that the barn had once belonged to Henry David Thoreau. Lucy called in barn expert and restorer Richard Babcock (who passed away in 2014) to carefully dismantle it. Each piece of lumber (or “sticks,” as barn aficionados refer to them) was carefully numbered and preserved. Neilson-Levin later researched the provenance of the wood, and it was indeed linked to Thoreau. The problem was that the lumber would build only one-third of the barn Tittmann was proposing. So, with the help of the Tittmanns and Babcock, Neilson-Levin and her mother set off on a barn-hunting trip. They mapped out properties in Massachusetts with old barns that were in need of rescuing, eventually finding two more that they could dismantle and add to their stick collection.

After the foundation of the house was laid and the floor deck placed on top, Babcock and his crew loaded the lumber from all three barns onto a barge and brought it to the island. Then Babcock, along with the other neighbors and locals on the island, held an old-fashioned barn raising, building one new barn assembled from the three dismantled ones. Because old barns such as these were put together with pegged mortise-and-tenon joints, the entire process took around five days. The builder and caretaker of the house, Michael Westphal, helped during the raising. Westphal has built many homes on the island, including Neilson-Levin’s parents’ and most of her siblings’ houses. “At one point Babcock and his crew were putting the finishing touches on the barn when the rafters all came down,” remembers Westphal.

“It was definitely a little scary.” Once the new barn was raised, construction began around it. Tittmann brought in project architect Craig Gibson, and the house was completed in 2002. When a visitor drives up to the finished house,
there’s an element of surprise. From the outside, the home looks like a newly constructed cottage shingled in red cedar. The barn is the hub and serves as the
primary living space. Inside, the exposed wood and beams imbue the space with an immediate coziness. Neilson-Levin always intended for the living room to have floor-to-ceiling bookshelves. A ladder built from extra lumber allows access to even the highest books. Two built-in benches for reading provide sight lines to the entry, to allow the reader to see visitors approaching. Neilson-Levin also wanted a bit of quirkiness, which resulted in stained-glass windows and glass cabinets that glimmer at intervals along the fireplace wall like found treasures. These cabinets are filled with curiosities that include the children’s old toys, ferry schedules, and natural finds from adventures on the island. The kitchen is built off the barn in the shape of a horseshoe. It has windows on all three sides to take advantage of the natural light. “There’s a lot of glass on the island, and we have always collected sea glass with the kids,” says Neilson-Levin. “I told Johnny that I loved the idea of having an area where the sun could shine through the colored glass.” Tittmann’s solution was to construct long shelves to display Neilson-Levin’s collection.

Part of what makes the project unique is that the architect, builder, and interior designer—Leandra Fremont-Smith of Leandra Fremont-Smith Interiors
in Yarmouth—all have connections to Mount Desert and its surrounding islands. Fremont-Smith’s family has vacationed on Mount Desert for five generations. Neilson-Levin found Fremont-Smith by word of mouth. “Emmy’s family immerses themselves in the island’s local culture and appreciates the unique place where they spend their summers,” Fremont-Smith says, noting that, when she would visit the jobsite in the morning, she would often see Neilson-Levin’s father at the island’s general store having coffee with other regulars.

After the house was built, Neilson-Levin filled it with well-loved antiques from her grandparents’ home, and she supplemented family pieces with yard-sale finds. “When you have young children the thought of having nice furniture or items in your house seems silly,” says Neilson-Levin. (At one point, there was even a rope swing in the middle of the barn.) It wasn’t until 13 years later, after Neilson-Levin’s children were older, that she decided that it was time to really organize the barn space and outside sitting area. Fremont-Smith and Neilson-Levin didn’t meet face-to-face until 2015, a year after the renovation had started. There was a lot of brainstorming over the phone. “We wanted to maintain that summer cottage feel, with a sophisticated flair that would evolve with the family,” says Fremont-Smith. One of the most important things to Neilson-Levin was to lighten up the barn and create a defined space. “The original floor and green trim was dark and absorbed all the light,” recalls Fremont-Smith. “To brighten the space, we painted the floor and trim in a shade of linen white.” It was important that Fremont-Smith be refined in her selection because she had to send design schemes to Seattle for Neilson-Levin to review. In the end, Neilson-Levin and Fremont-Smith chose Cowtan and Tout’s Caramoor fabric, which has a playful floral and animal motif, as their main inspiration. The designer broke up the expanse of the barn with furniture groupings arranged into several distinct spaces. Where before
there was just a dining and living room, there is now a separate seating area for entertaining in the dining room, allowing guests to easily flow from cocktails to
the dinner table. After dinner, they can either sit by the fire in the living room, do a puzzle, or go outside to cook s’mores.

The porch has an outside fireplace for chilly summer nights, but it wasn’t until Fremont-Smith was brought in that an outside dining area was established. “Tittmann had created wonderful outdoor spaces with impeccable architectural details, just begging to be used in multiple ways,” says Fremont-Smith. Classic wicker furniture from Janus et Cie was selected and paired with hand-blocked textiles. One of the design challenges was getting everything to the house; Great Cranberry is an island off an island, after all. Every measurement had to be exact because there would be no going back over the winter. Fremont-Smith had pieces sent to her office in Yarmouth, and from there had a moving truck deliver the items to a rented barge.

Recently, Neilson-Levin asked each of her children when it was that they really felt one with nature. “They all said, ‘Maine!’” she says. “We live in a suburb of Seattle, and on Great Cranberry my kids can really be free,” says Neilson-Levin. Today the “kids” are all in their early 20s, but they still relish their time there
during the summer. “It’s a tradition for them to sneak down to the basement and graffiti their initials every summer,” Neilson-Levin says. Summers past were filled with riding bicycles down to their cousins’ houses, playing on the rocks, swimming, and creating fairy houses in the woods surrounding the property. “They all learned to ride a two-wheeler here,” says Neilson-Levin. Now, when they gather every summer, the family has weekly meetings to discuss cooking plans and what they will do together that week. Meals are spent at each other’s houses, and everyone makes something, and nights are spent sitting around the fire and telling stories. “The island really is the perfect place for our family,” says Neilson-Levin. 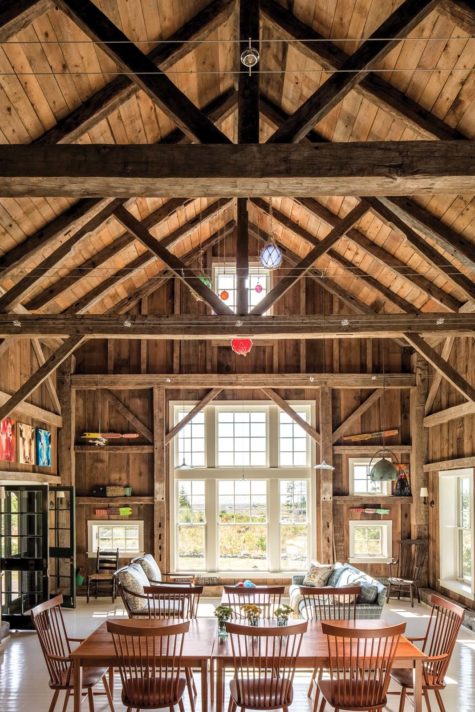 Glass floats selected by one of Neilson-Levin’s friends hang from the ceiling of the barn’s dining area. 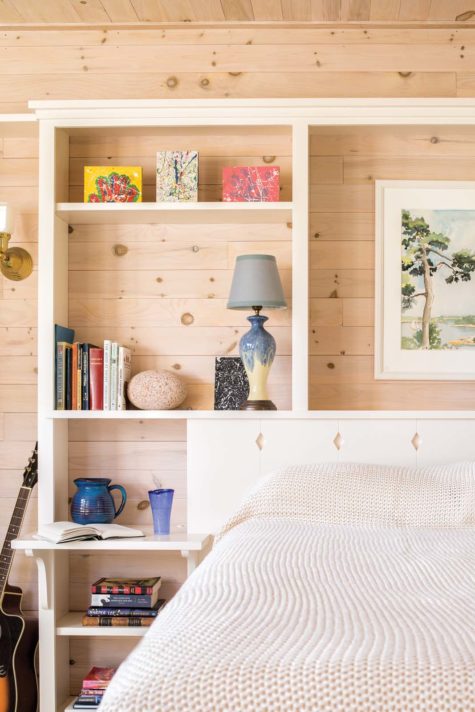 One of four bedrooms house, which all feature simple decor in neutral colors. 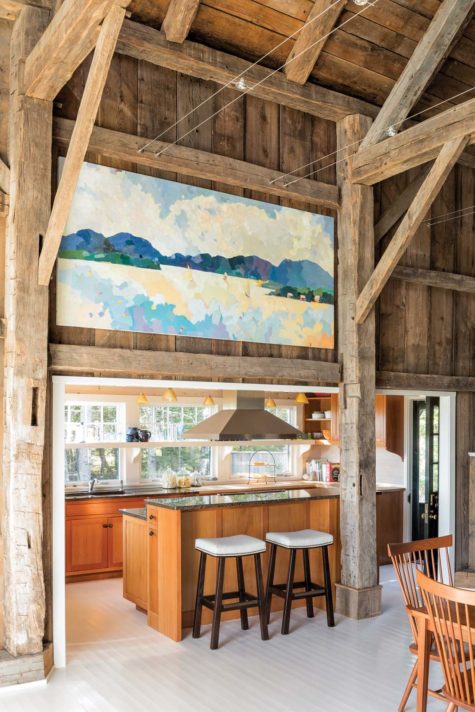 The kitchen is tucked away off one end of the barn with windows on all sides to take advantage of the natural light. Homeowner Emmy Neilson-Levin selected the large painting by local artist Henry Isaacs titled Mount Desert from the North Shore, Great Cranberry Island. Fremont-Smith added simple wooden bar stools by Lee Industries. 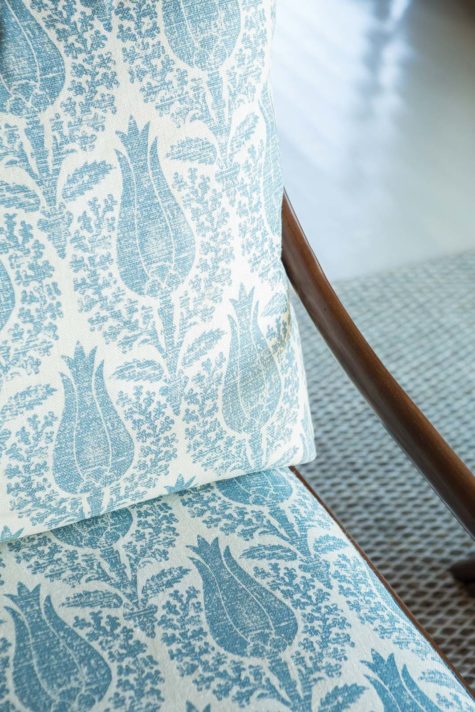 An antique chair was reupholstered in a blue and white block print fabric.