Turning an L.C. Andrew Kit House in Southport into a Family Dream Home 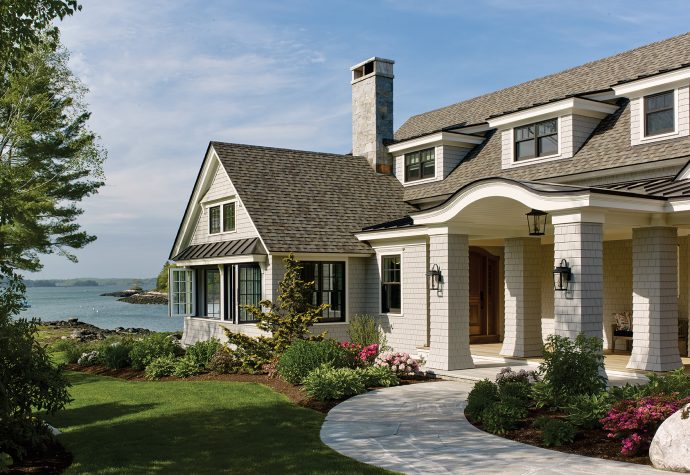 The owners of this Southport property commissioned Knickerbocker Group to conceive, decorate, and build this 6,000-square-foot two-bedroom residence, which replaced a dated L.C. Andrew kit house from 1964. 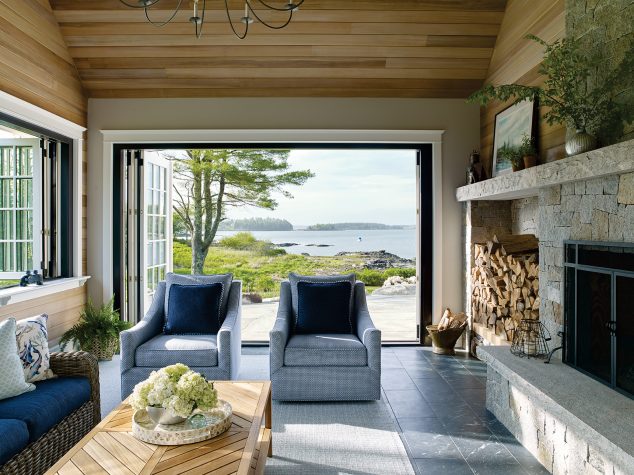 An insulated three-season room stays comfortable in cooler weather thanks to a granite-clad fireplace, an accordion door-and-window system, and retractable screens. 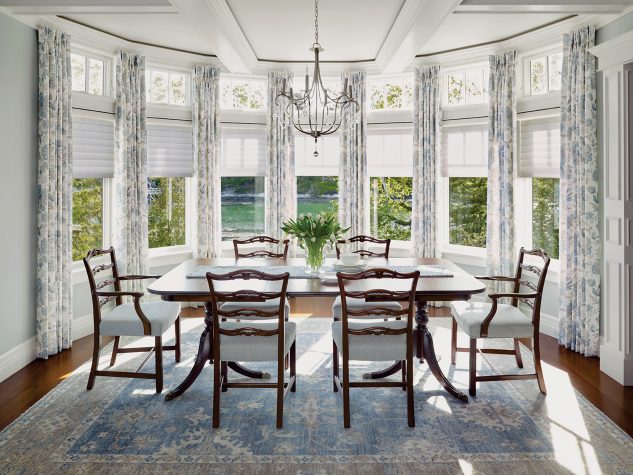 Curtains in a Cowtan and Tout fabric frame the dining room windows, while a chandelier from Currey and Company hangs above an antique table and chairs; the rug is from Mougalian Rugs. 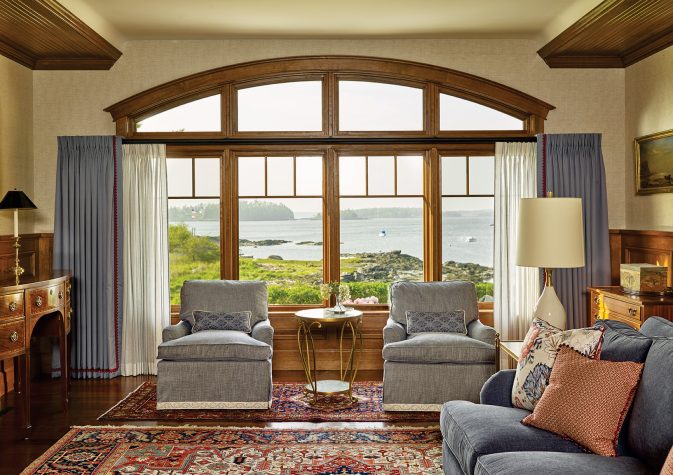 The living room, which is sheathed in a wall covering by Thibaut, enjoys picture-perfect water views. 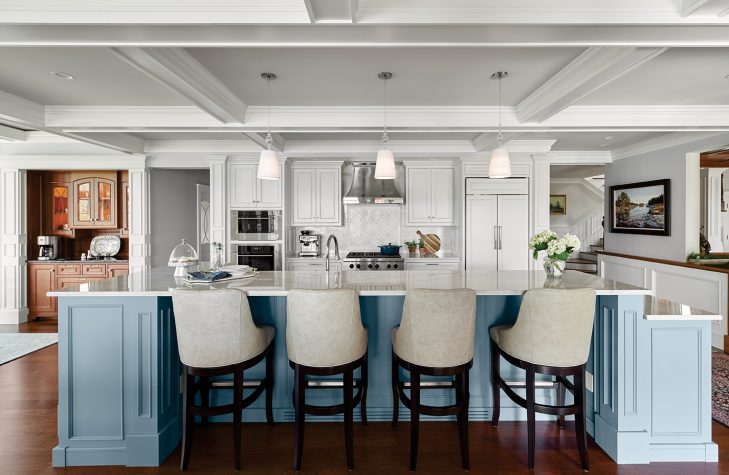 The kitchen has cabinetry painted in Benjamin Moore’s Intense White and Mineral Alloy. 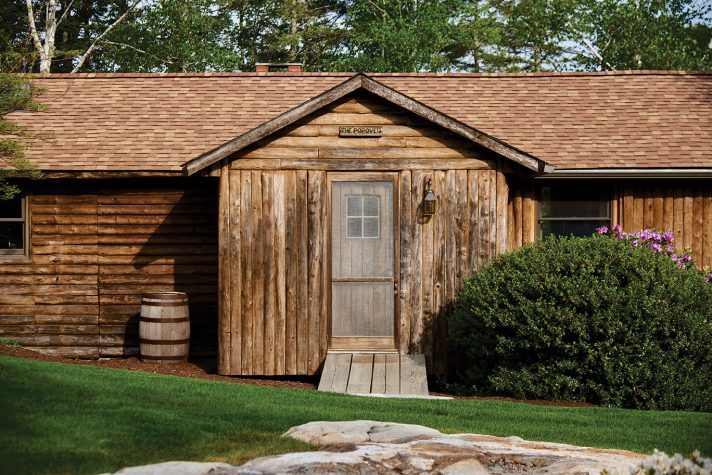 The property’s original two-bedroom guest cabin dubbed “the Popover” is still used by guests as well as the owners’ three children.

Tearing down a vacation house that has been in one’s family for 60 years, even to build a dream home, can be bittersweet. However, the owners of this waterfront property in Southport made sure to honor the site and its history in the process. “My father had the original cabin, an L.C. Andrew kit house, built in 1964,” notes the husband, who spent summers there and eventually inherited the property. “The floor plan was extremely cut up as a result of multiple additions, and it would have been impossible to correct.” The couple spend weekends in Maine and eventually plan to retire here, so a well-thought-out, highly personalized residence was a must. To conceive their dream home, the couple tapped Knickerbocker Group to handle everything from the architecture to construction to interiors.

The most important change for the Massachusetts-based couple was to take advantage of the various water views the site offers, so architectural designer Randy Smith set out to create a floor plan that stretches as wide as possible, delivering expansive vistas to the living room, sunroom, kitchen, and a fully insulated three-season room. According to Smith, because the clients had spent so much time on the site in the past, they already had some favorite views that they wanted carried into the new structure. “We love to cook, but the previous kitchen was no larger than a closet, and you couldn’t see the water,” explains the wife. “It was a lot of fun bouncing around ideas and coming up with a solution.” Smith incorporated the original 4,000-square-foot home’s foundation into a new 6,000-square-foot two-bedroom residence. “The permit was contingent on using as much of the existing foundation as we could,” explains the designer, who had to work around the 75-foot tidal setback regulations. “We were restricted by area and volume, which we came close to maxing out. Laterally, we were allowed to expand up to 50 percent of the water-facing facade of the structure. Aside from that, we had to build away from the water. There was also the existing septic system to work around—which is located close to the building—so envisioning the floor plan was like fitting puzzle pieces together. We simply didn’t have as open a palette as you would farther away from the water.”

Still, Smith worked with the homeowners so they wouldn’t need to sacrifice their major goals for the home, which they hoped would be a traditional-style residence that feels tight to the landscape. “We went out into the middle of the bay, took photos of the house, and then superimposed pictures of the model to make sure they were comfortable with the elevation,” explains Smith. “It was important to the clients that the house not look or feel monstrous in any way. Our goal was to modernize the traditional New England shingle-style house and incorporate more glazing than the original, which was very dark.” At the same time, it was critical that this new building make sense with the remaining guest cottage, a two-bedroom cabin with a kitchen and living area dubbed “the Popover” by the husband’s father, who built it as a place for his “pop” to stay overnight. These days, the Popover is used by guests as well as the couple’s three grown children. “There’s a harmony with the existing guest cottage,” says Smith. “We tried to pay homage to how the family had historically interacted with the site.”

Inside, the objective is for the home to operate just as well for entertaining as it does when the couple is alone. In addition to a formal living room, there’s a sunroom, an entertainment area on the second floor with a wet bar and television, a wine cellar, and a three-season porch that serves as a more informal living area. During the summer, the porch’s folding doors and windows can be opened up and screened off, while a fireplace transforms the space into a cozy nook during cooler months. “The sunroom and the formal living room capture different moods and accommodate different activities,” explains Smith. Also on the main level is the primary suite, as aging in place was another goal that the homeowners asked Smith to address. Because the clients collect artwork, mostly by New England artists, the architectural designer paid special attention to partitioning and lighting. “We didn’t design around the art per se, but we did make sure to have ample wall space,” he says. Smith also took into account the couple’s affinity for boating, incorporating mahogany and cherry woodwork that recalls a nautical aesthetic. There’s even a barrel-shaped mahogany ceiling that welcomes guests in the entry. “There are so many intricate details throughout the home, from the ceiling coffers to the custom cabinetry to the millwork,” says project manager Derek Chapman. “Because the clients were so detail-oriented, mock-ups were made for everything during the decision phase. And the level of detail grew over the course of the project, becoming more involved as we went on.”

Details were certainly a running theme: The entire design team met with the clients every week for three years, exhausting all options to achieve a perfect end result. “We would have ten patches of paint on one wall, analyzing them at different times of the day,” recalls lead interior designer Elena Duralde and interior designer Pascale Plüss-Zehm. In fact, the husband jokes that choosing paint colors was the toughest part. “There are just too many shades of white!” he says with a laugh. Various tones of blue appear throughout the residence, joined by subtle greens and pops of red. The living room feels more formal due to its richer blues, while the sunroom—with lighter blues and greens—is much softer and more relaxed, says Duralde. “When you’re in the living room, it’s almost as though you’ve gone back in time. The clients also collect antique furniture and rugs, and we placed many of those pieces in this room, along with some of their artwork depicting nautical scenes. It was critical that we find room to incorporate their antiques, paintings, and sculptures. The majority of the new items we brought in are transitional. We wanted to sprinkle their antiques throughout but take the overall style in a more relaxed direction. It was about marrying the old with the new.” Patterned wallpapers in a few select areas—including a Pierre Frey grasscloth depicting fish—lend a touch of whimsy.

It’s the kitchen, however, that is the hub of the home. “The clients were very detailed about the kitchen layout, specifically about how they wanted to interact with guests in the space as well as how the kitchen relates to other areas of the house,” explains Duralde. “From the kitchen, you have sightlines into multiple rooms, so people can be spread out while still interacting. It’s a fairly open floor plan, with the various spaces on the main floor delineated by architectural features such as columns and arch-ways. The interiors were very much client driven. Our goal as a team was to understand their vision, put our professional spin on it, and make their dream a reality.” 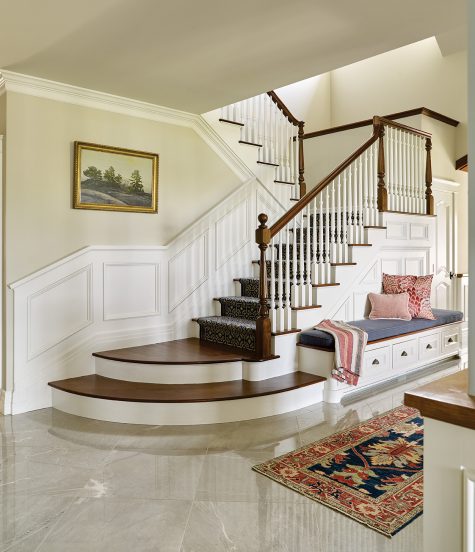 A grand mahogany staircase featuring a custom stair runner designed through Bradford’s Rug Gallery leads to the second floor, which includes a vaulted entertainment space with a television and wet bar. 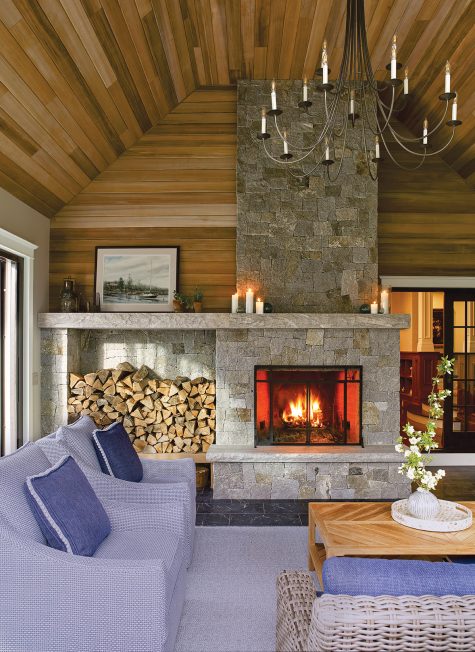 The three-season room features whitewashed red cedar and honed-porcelain tile flooring; the swivel chairs and the cocktail table were sourced through COVE by Knickerbocker Group. 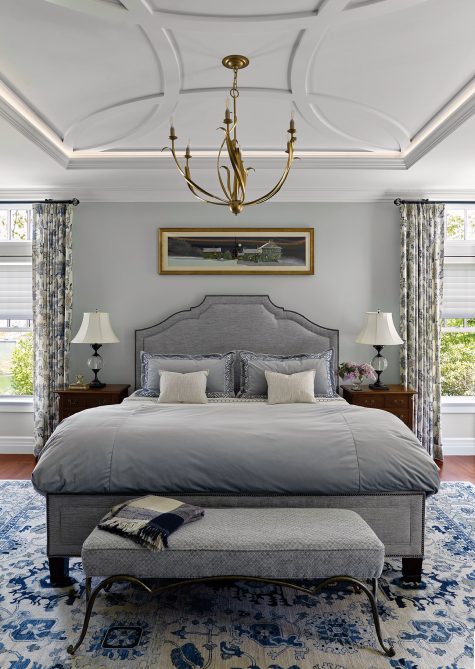 The primary bedroom features a bed sourced through COVE by Knickerbocker Group, a chandelier from Currey and Company, and a rug from Mougalian Rugs. 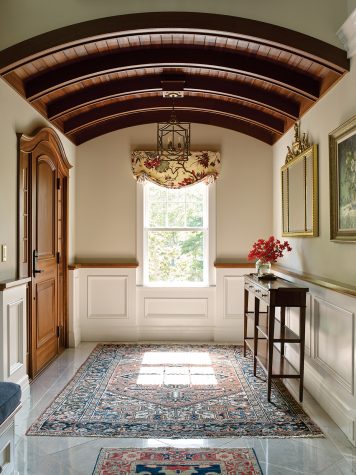 As a nod to the homeowners’ affinity for boating, architectural designer Randy Smith conceived a barrel-vaulted ceiling clad in mahogany for the entry. 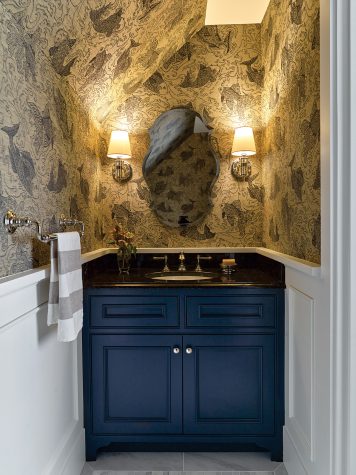 A fish-print wallpaper from Pierre Frey lends a sense of whimsy to a second-floor powder room; the vanity is painted in Benjamin Moore’s Hale Navy. 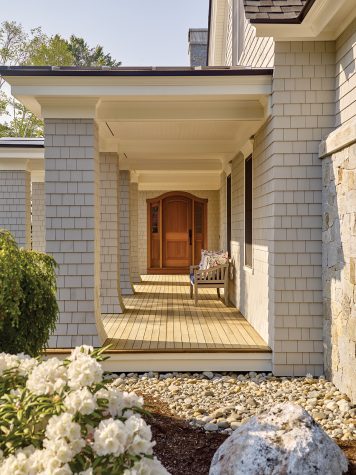 The materials palette, including the stained eastern white cedar shingles, is in keeping with the traditional New England aesthetic that the clients wanted. 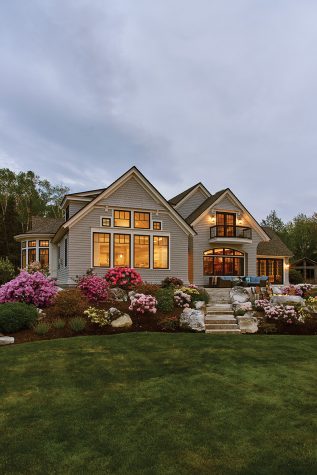 More glazing than a typical shingle-style house was employed to make the most of the views and natural light: “We wanted a bright, open interior,” notes architectural designer Randy Smith.