A Stately North Haven Cottage Gets a Seamless Restoration 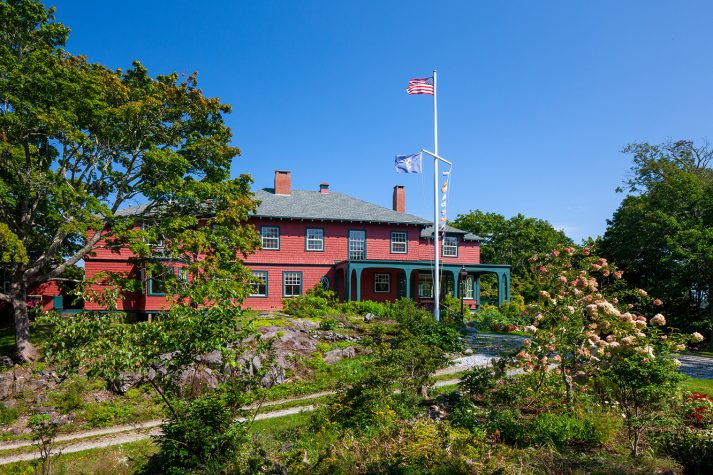 The homeowners chose not to winterize the main house. “Our brief was to first, do no harm,” says architect Ankie Barnes. “That was a fun challenge.” The cottage was originally designed by a Boston architect in the late 1800s, and it bears many hallmarks of the era (including a sunroom off the side). 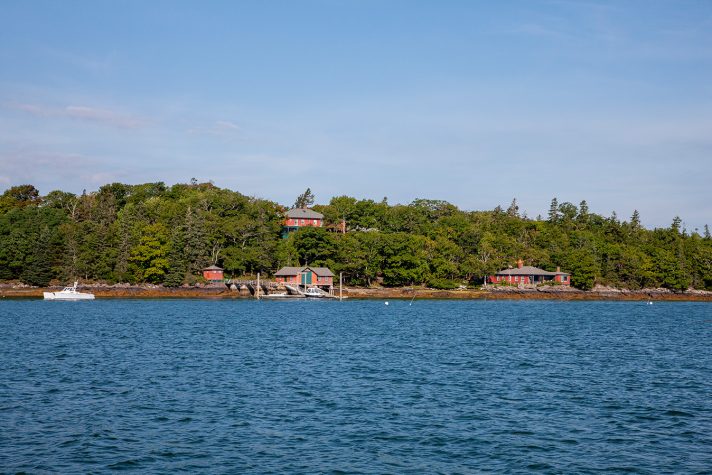 The owners briefly considered changing the paint color to untreated cedar siding, but ultimately felt it would be wrong. 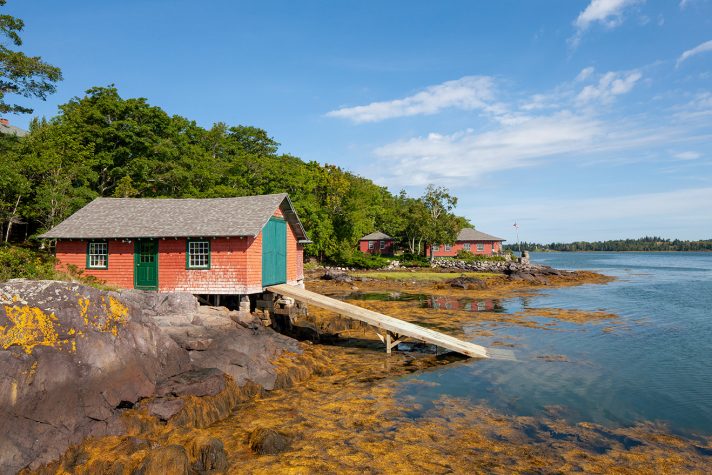 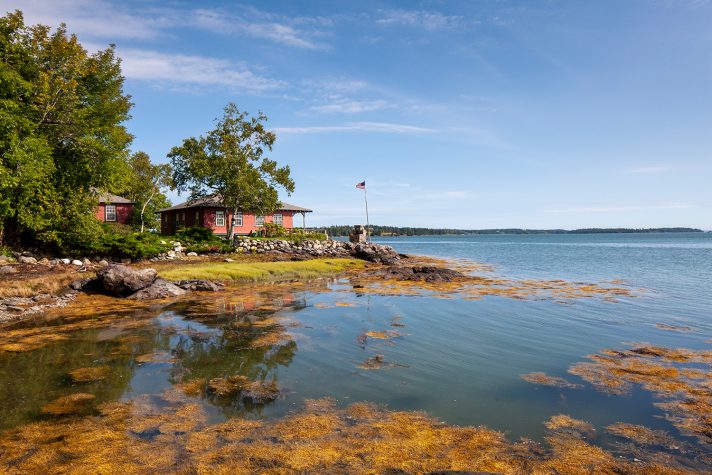 The Crosstrees sits on 17 acres of island land overlooking the Fox Island Thorofare. The current owners first spotted the red-and-green structures on a sailing trip some 30 years before they moved in. 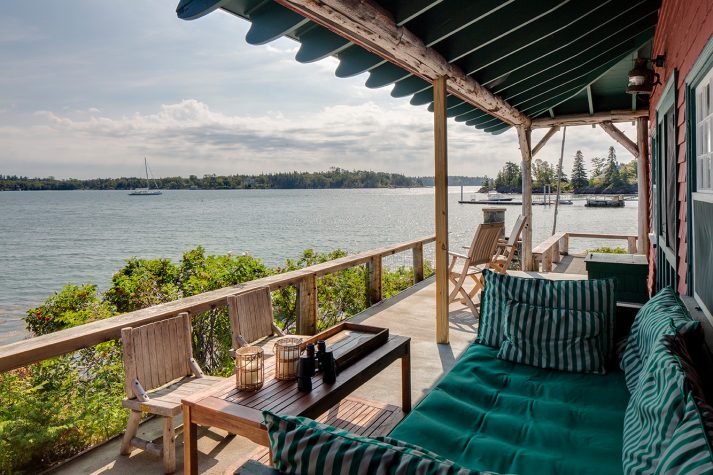 The family has a ritual of eating dinner on the Hope Cottage porch. 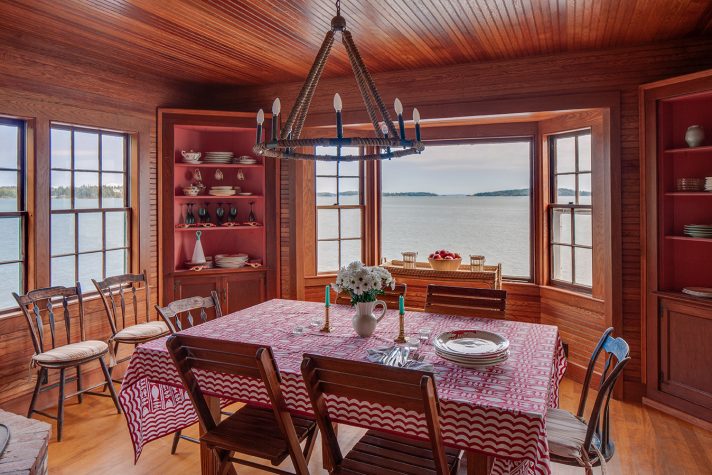 While the family brought in plenty of new furniture, they kept the dining room table. “You can pull the table out to seat 16. We’re always making a fuss of setting the table, getting the flowers, serving great big meals,” says the wife. “We really enjoy it.” 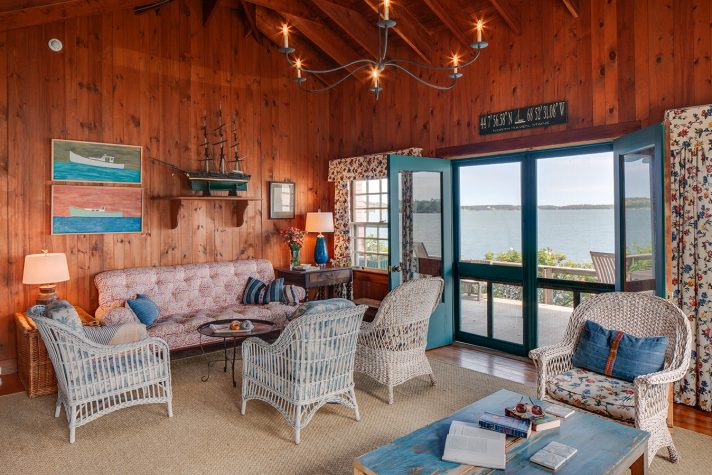 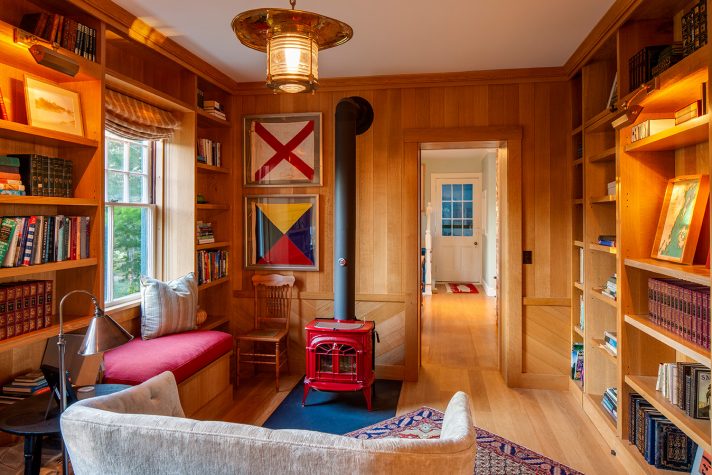 Framed nautical flags hint at the homeowners’ passion for sailing. 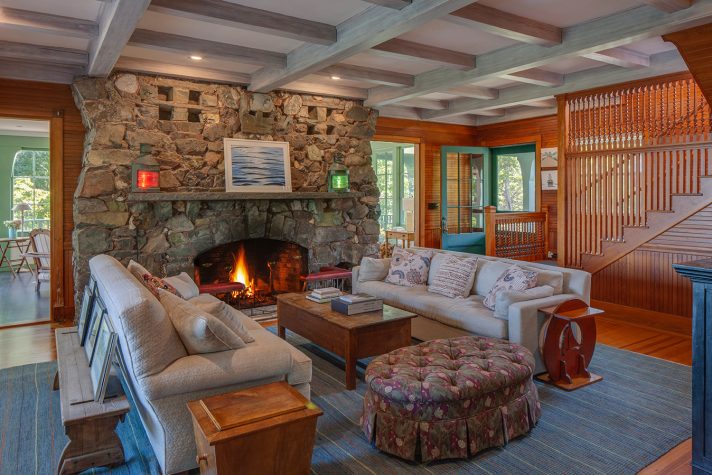 “In the living room, there are some graceful and rustic details” says Barnes. “The beautiful screened wall, turned balusters—all stained oak. It goes all the way to the ceiling. That was a flamboyant gesture. And there’s a very rustic stone fireplace. It looks like every piece of stone was found on-site, so we left that exactly how it was.” 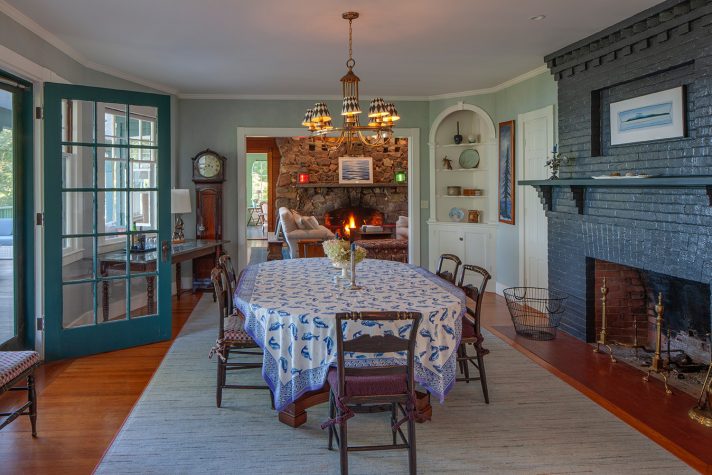 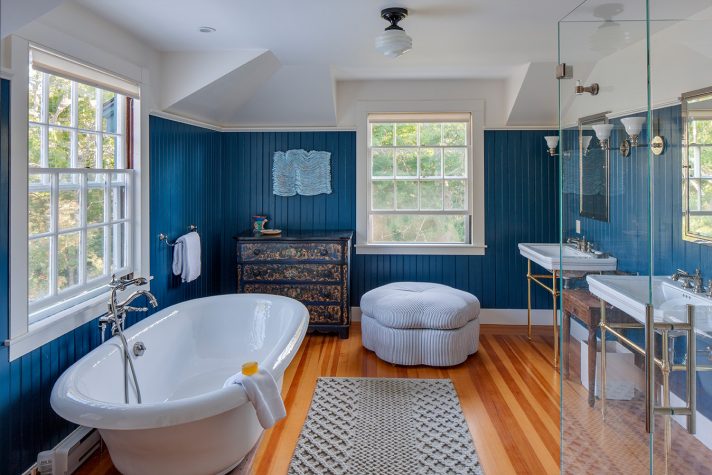 The bathrooms got a modern makeover during the renovation, but it was important to the homeowners that they retain their vintage character. 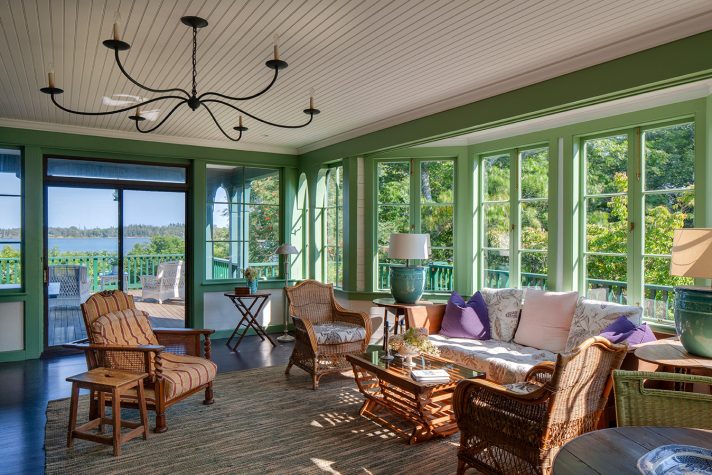 An apple green paint brightened up the sunroom. While the husband chose most of the art, the wife selected paint colors. “I’m a paint color nut,” she says. “They can really make a room sing.” 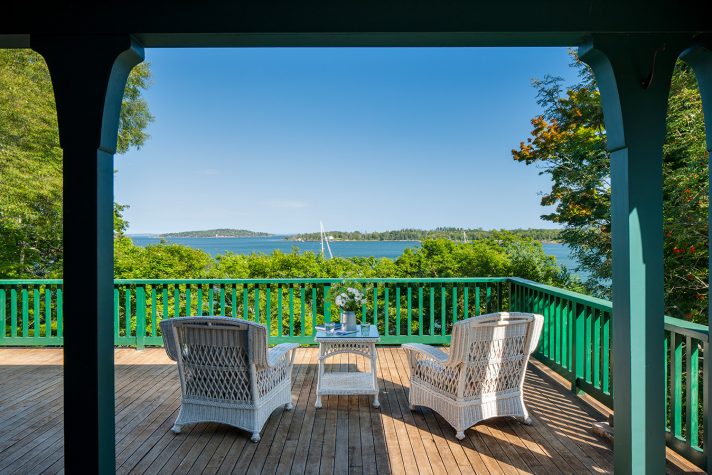 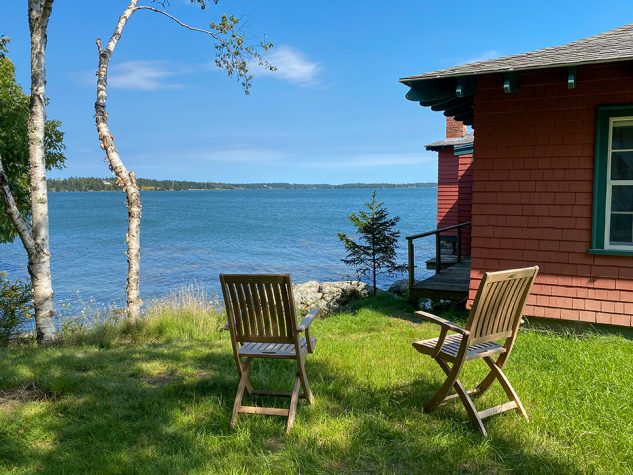 In the late 1800s, everyone who was anyone in Boston or New York wouldn’t be caught dead on the city streets come high summer. Once the heat rolled in over the cobblestones, the so-called “nobs” rolled out. The smartest among them went north. North along the Hudson to a riverfront estate, north to the Catskills for a little country living, or up the coast to the island cottages of Maine.

The Crosstrees, located on North Haven, can be glimpsed by sailors navigating the Fox Island Thorofare. This is exactly how the current homeowners first saw it, spotted from the side of their boat on a balmy day in 1985. “When it came up for sale five years ago, it felt like it was meant to be,” says the wife. “Although it was painful for the family to sell it, we felt like we could be good custodians.” Unlike many of the old summer cottages of the Gilded Age, which have been gutted, renovated, and rebuilt beyond recognition, Crosstrees had retained its character. For over a century, the early shingle-style house had served as a bright red landmark for sailors. “We thought about changing the color,” admits the wife. “But so many people knew the house, and it wouldn’t have been right.”

From the outside, Crosstrees looks more or less the same as it ever did. The main house is an echo of Franklin D. Roosevelt’s famous Campobello cottage, located off the coast of New Brunswick. It’s not a precise copy of the presidential playground, but the architecture is similar, and the paint color is “an exact match,” says Taylor Martens of Taylor-Made Builders, who oversaw the renovation of the compound’s multiple structures. “When we got there, there was a lot of deferred maintenance from the previous owners that had to be done,” he says. It’s never easy to build on an island, but his team had several boats at their disposal and years of experience ferrying over supplies, which helped speed up the process. “Our job was to go building by building and fix up what needed repairing, as well as add modern conveniences,” he explains. The homeowners wanted to use “the lightest of touches,” on the space, adds architect Ankie Barnes of Barnes-Vanze Architects. “If you go around and look at the photos, you couldn’t even tell if we had done anything. That was the point.”

But at times the repairs were extensive, particularly when it came to the seafront building called Hope Cottage. Located at water level, this pretty little house hangs over the water of the Atlantic, and over the years the salty waves had eroded its foundations. In order to make it safe for long-term use, Hope Cottage required new underfittings, including granite cribwork and steel posts. “When you lifted the linoleum kitchen floor, you could see down into the water,” says the wife. “It was rotten in parts.” Barnes designed a new kitchen with additional windows to take advantage of the spectacular views. The bathroom, too, needed to be entirely redone. “We did a lot of painting and papering,” recalls Martens. “But we also worked under the house. With that, we had to work around the tides. When the tide went out, we’d do a bit of work. When the tide came in, we had to stop.”

The other guesthouse, referred to by the homeowners as the Custom House, also needed a decent amount of work. This structure was gutted and winterized to create a space that can be used even in the coldest months. Martens and his team added an extra bedroom to the layout and put in an entirely new kitchen. Because the couple had once lived in Paris, this house became “a bit Frenchy,” says the wife. “There are French beds in the bedrooms. Downstairs we have a black and white rug and some cool, modern metal chairs.” In the process of stripping the build-ing down to the frame, they ended up taking out a few desirable features, including the fire-place and the secret liquor cabinet, which had been hidden behind a painting. “We put that back in when we rebuilt,” says the wife. “To make anything concealed is tricky and challenging,” says Martens. Fortunately, they had a master cabinet and kitchen modeler on hand to make everything look seamless. Peter Cabot, who built the bar at Nebo Lodge, came in to work with the white oak boards that Barnes had selected for the project. “White oak is less ruddy than red oak, and it has a nicer look that really worked with this build,” says Martens.

The main house presented a different set of obstacles. While it hadn’t been neglected as much as the guesthouses, the stately red cottage still wanted an update. Here especially, the homeowners were committed to keeping in character. While many people would want to redo the floors to make them plumb and replace the vinyl and formica wainscot with more durable materials, these homeowners had formed an emotional attachment to the summerhouse with all its various quirks. “They were a little romantic about it, so I had to convince them to redo some of the bathrooms and update the plumbing,” says Barnes. But he didn’t need to talk them into changing the layout of the first floor. “As soon as I walked into the kitchen, I thought, ‘This should be a library,’” recalls the wife.

Although they didn’t know it at the time, the plans that Barnes had created for the main house would function like a time machine. “The architecture spoke to putting the kitchen in the corner, and to opening a door here,” says the wife. “Later, we found the original onion skin plans, and we saw that the kitchen had been in that corner—but it was a servants’ kitchen.” After Martens and his crew had left, the couple invited the previous owner, Mrs. Cabot, into the house to see what they’d done. “She walked through and kept saying, ‘This is how it was when I was growing up,’” the homeowner says. “It happened to be that we put things back into place.”

Upstairs got a slight makeover during the renovation as well, for the couple wanted each of their four children to have their own room and their own view. “We didn’t want anyone to feel like they got the worst view,” she says. “That was a feat.” With an eye toward adding light while respecting the original facade, Barnes carefully placed the sleeping quarters so that each of the girls could wake up and look at something lovely. This wasn’t that tough, given the property: Crosstrees sits on 17 acres of island that include rolling meadows and picturesque pines. Behind the house, there’s a pond, chicken coop, and vegetable garden.

Ultimately, the goal of the restoration wasn’t to make everything picture-perfect. It was to create an old-fashioned country home that welcomes its new family and their guests with ease. With the help of interior designer Lisa Vandenburgh, they added color, depth, and art to the interiors. Down came the heavy chintz curtains and up went the fresh paint. For the walls, they selected bright, coastal colors with historic precedent, like apple green and cornflower blue. Because the family had spent years living in the Cotswolds, they gravitated toward antiques from Europe and furniture inspired by these classic styles. Vandenburgh hung art from local painters, returned the original ships’ models that came with the house to their places on the shelves, and helped select light fixtures that would brighten the wood-paneled rooms.

Ultimately, everyone involved with the renovation-slash-restoration is happy with how it turned out. “Whenever we could, we managed to keep the original fixtures,” says Barnes. “We had to redo a few faucets. And the planks in the living room don’t match, yet. It needs about 100 more cigars smoked in that room, then they will match perfectly.” But, he suggests, “Have a whiskey and you won’t be able to tell.” It seems like the right attitude for this island escape—not quite plumb, not quite polished, but still ready for the next 100 years of summer fun. 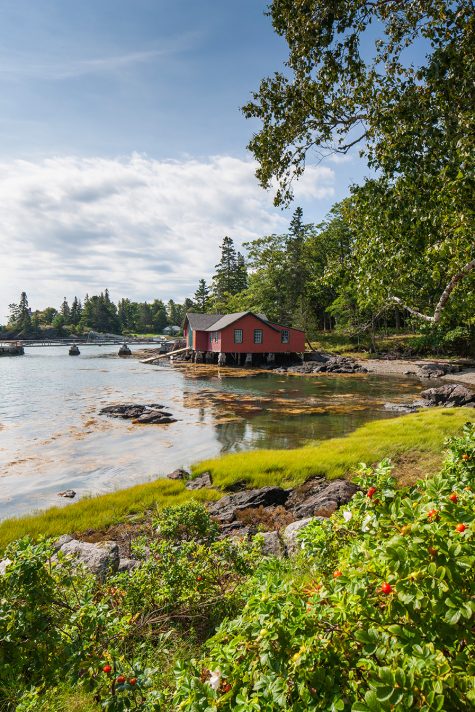 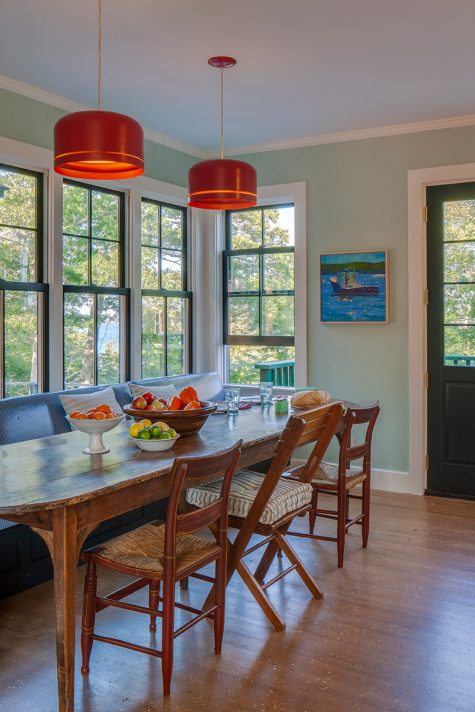 The couple worked with designer Lisa Vandenburgh on the interiors. "We couldn't have done it without Lisa," says the wife. “We went slowly with the art,” she says. “We chose a lot of modern, colorful paintings. We have a few works from Andy, who runs the golf course. He paints beautifully.” 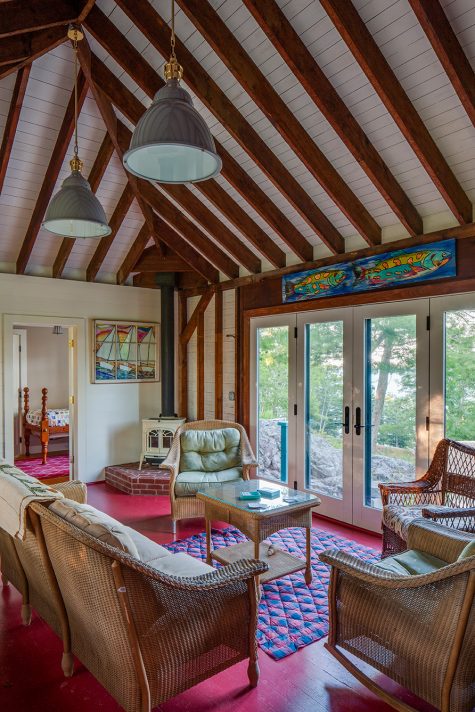 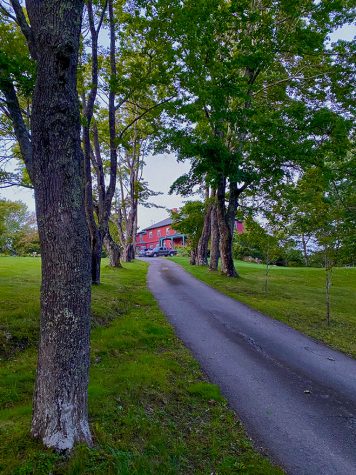 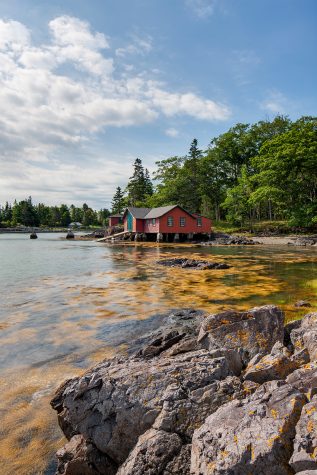 Perched on the edge of the island is Hope Cottage. When Martens arrived, there were sections of the floor that had rotted away. New granite and steel was put in to keep the Hope afloat. 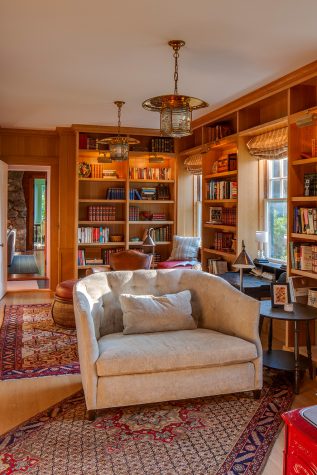 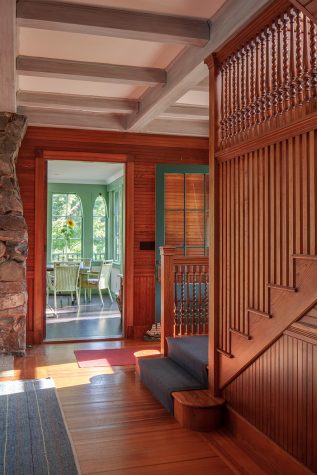 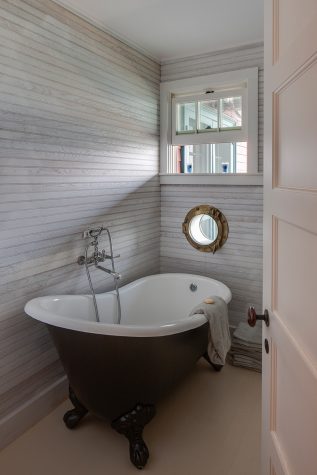 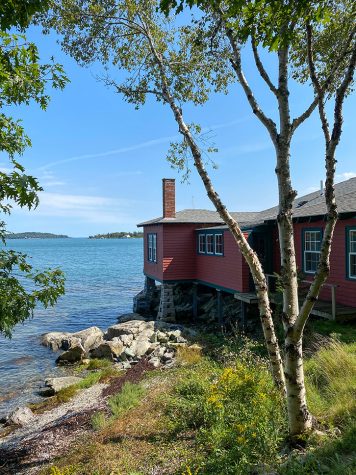