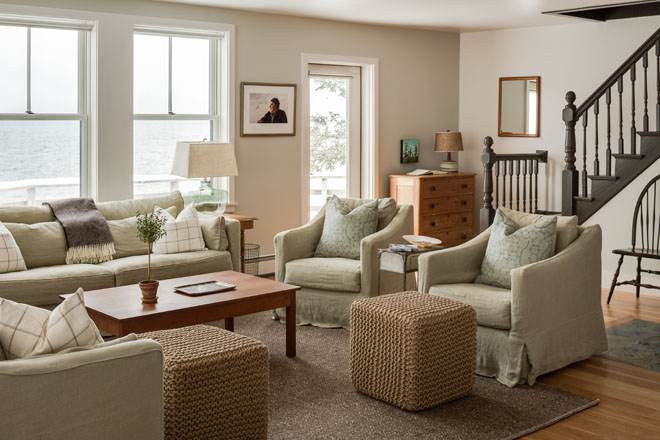 In the process of winterizing this coastal cottage, builders removed interior walls to create a great room, which features upholstered furniture from Youngs, an early Thos. Moser coffee table, and nautical rope cubes that serve as foot rests or extra seating. The original staircase was sanded and repainted black. The pine chest is a gift from the homeowner’s parents. The weathered lobsterman in the high-quality print on the wall is Walter, a frequent subject of Andrew Wyeth’s, here represented in a painting by the late Nat Lewis, formerly of New Jersey and Port Clyde. 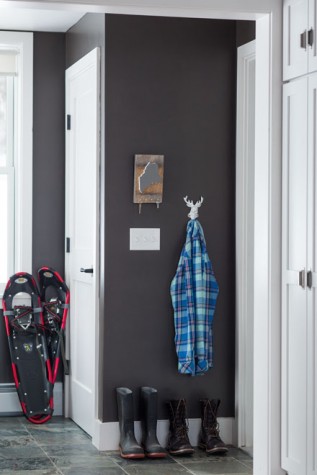 The entryway with seal gray paint and floor tiles that suggest slate. 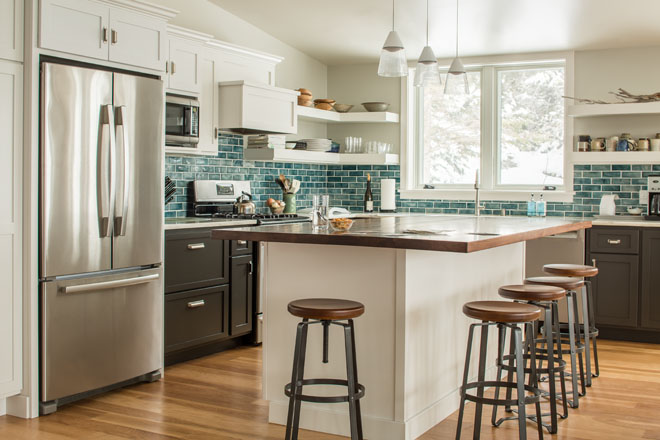 A light and airy kitchen with open shelves features the homeowner’s collection of pottery. The dark cabinets below anchor the space and highlight a color used as accent throughout the house. Neighbors who specialize in building wooden tubs handcrafted the walnut kitchen island counter. 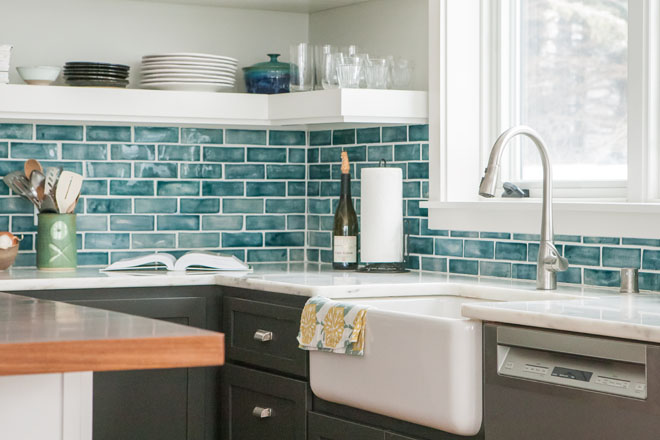 A farmer’s sink and a backsplash of peacock blue-green pottery tiles. 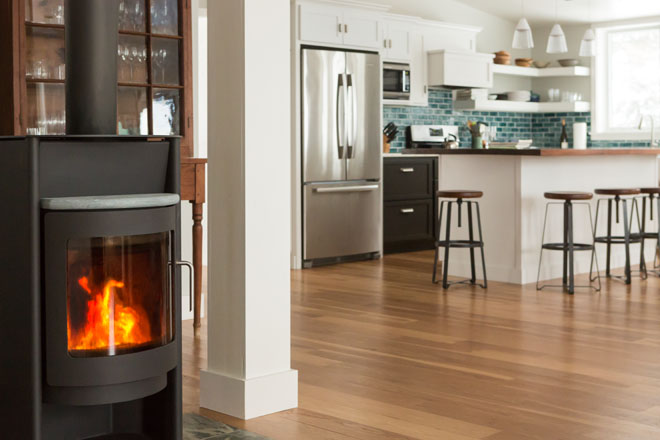 Where there once was a big chimney, there is now a wood fireplace that neighbors a structural column outfitted with niches in which visitors place rocks they’ve painted as place cards. The stools around the kitchen island are from West Elm. 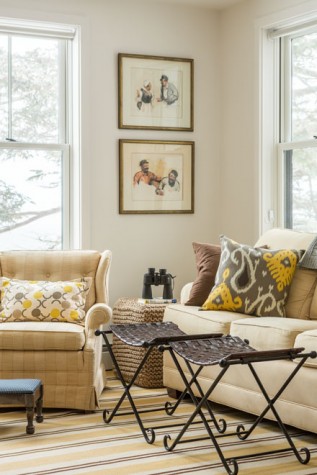 Once a small bedroom, this ground floor den is now furnished with items from the previous cottage, including Gordon Grant prints of Portuguese fishermen that were a gift from the homeowner’s parents. 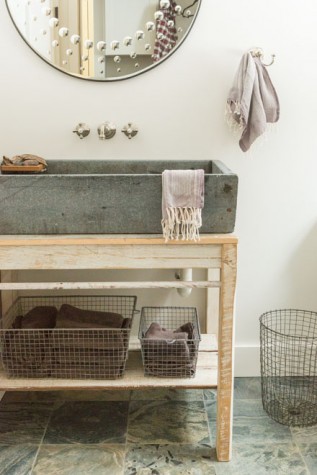 The powder room vanity was designed by Krista Stokes of Kennebunkport and built by Ross Anctil, a third-generation cabinetmaker from Lewiston, and is made of old barn board and features a soapstone sink and custom black walnut soap tray. 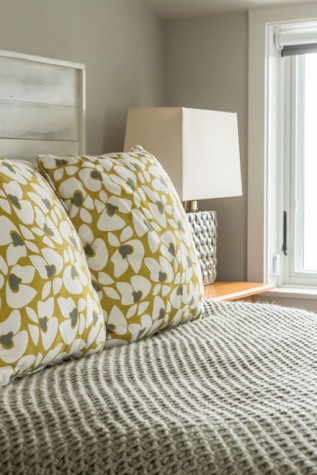 The owner’s bed, with linens from Pine Cone Hill. In the background, a lamp whose base is a ceramic basketweave. 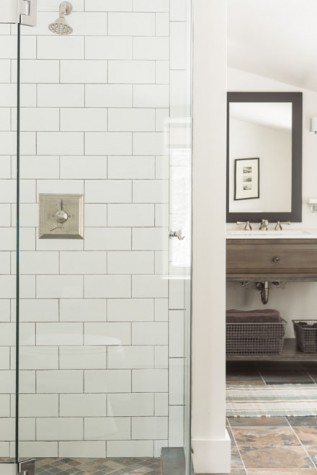 All the bathrooms have subway tiles with contrasting grout. 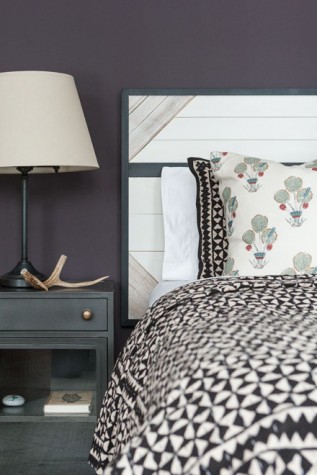 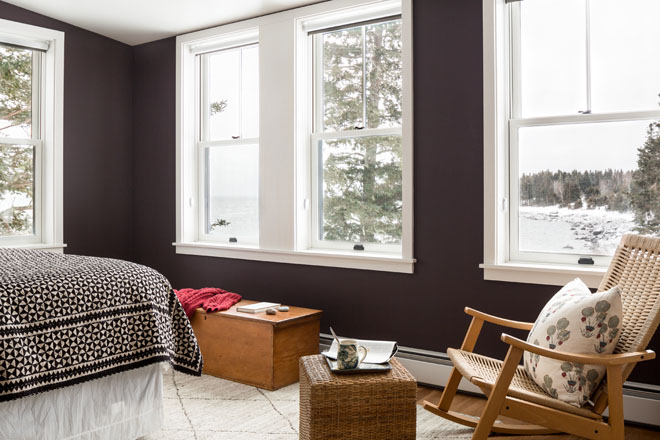 The paint on the owner’s bedroom wall is a dark neutral that looks almost like eggplant. The color echoes the kitchen cabinets and staircase railing. The homeowner says she “could get away with the color” because of the big windows looking out on the ocean. The pillow on the Hans Wegner–style jute rocking chair inspired much of the house’s decor. 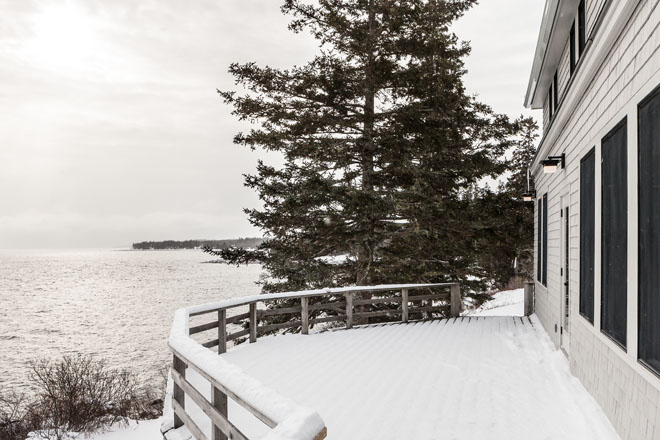 As someone lucky enough to have been an overnight guest at some beautiful summer homes. I know my job: bring gifts. Maybe wine, or a pie from Two Fat Cats in Portland, or a ginger molasses cake from Rosemont in Yarmouth. Something, at any rate, to accompany the evening meal. Visitors to a recently renovated cottage on Swan’s Island also have to bring something to their evening meals, and that something is a rock. Stone soup for supper? No, not at all. The homeowner loves to cook. She only asks that her guests create their own table place cards by picking a stone from her property’s beach and painting it with their names and an image. When guests depart, the homeowner places the stones in niches built into two living room columns that were added during the renovation of her home. It’s one of the small ways that the house, quite literally, holds onto the memories made inside it.

A 2014 renovation of the shore cottage was sparked by the homeowner’s move to another house in Maine. Although she and her family had owned the cottage for over a decade, they had previously lived out of state, visiting primarily in summer. Closer proximity meant the opportunity to use the cottage, if winterized, year-round. Winterizing suggested systems updates, which suggested other long-deferred repairs. Eventually the cottage was gutted: stripped back to the framing and sheathing, jacked up, placed on a new foundation, and given a redesign. Portland architect Richard Renner stayed in the old cottage before the changes, and he says, “It became clear to me that the cottage had a history and that there were important memories to save and build on.” Witness the beach rocks. “We wanted to preserve a link to the past but give the building a new life and more potential.”

“Down to earth” is the term interior designer Krista Stokes of Kennebunkport uses to describe the homeowner, and the homeowner bears this out by explaining that her desire was to keep to “the fundamental scale and simplicity” of the original house while adding amenities. She wanted a combined dining room, living room, and kitchen, a main area where people—whether cooking, reading a paper, or working on a computer—could be part of a central conversation. “It’s important to know that on Swan’s Island, there’s no commercial activity. You import your fun and fellowship, so a lot focuses on meals and togetherness,” says the homeowner. To create a communal space, the basic downstairs floor plan was maintained, but following Renner’s design, builder John Collier of A.B. and J.R. Hodgkins in Bar Harbor removed the walls that once separated living room, dining room, and kitchen. He also expanded the kitchen and dining spaces. Meanwhile, an en-suite owner’s bedroom was added on the first floor, a change that freed up a small first-floor bedroom to become a TV room/den with built-in bookcases for books, games, and puzzles. A new powder room was added off the kitchen. Still, no one visiting who knew the old house would ever be confused by these additions. Where there was once a large stone fireplace, there is now a RAIS woodstove. Where there was once a staircase, there is still a staircase, only it has been sanded down and painted an edgy gray-black.

Upstairs the basic configuration of the three bedrooms remains the same, but one bathroom has been added, another updated. The original fir floors have been preserved, although the ground floor was redone with hickory.

Outside, the original form of the cottage can be read through its current form, although new shed roofs accommodate the expanded spaces. On all sides, windows were replaced and added to take better advantage of the views, which are, as the homeowner puts it, “back to Acadia and out to Portugal.”

The homeowner considers the cottage a legacy home, intended for her children and grandchildren to enjoy well into the future. As such, the interior design’s emphasis is on simplicity, keeping things basic and colors neutral. “The aesthetics are meant to be absolutely serene and to create a seamless unified look throughout,” says the homeowner. “I call Krista the color whisperer. She is a genius at looking at a house as a system of color.”

One of the first things Stokes bought for the house was a pillow from Youngs Furniture in South Portland. The cushion is covered in a cream vintage fabric with a hand-painted, whimsical graphic pattern of light green and rust balloons. Or are they abstract flowers? “That’s you in a pillow,” Stokes told the homeowner. “It’s not too modern, not too vintage. It’s warm but has distinct color.” The pillow description became the directive for the house. Several pieces were carried over from the previous house to the current one: a hutch and old pine dressers that were a gift from the homeowner’s parents, a couch, upholstered chairs, and a toy boat made of Popsicle sticks and a sanddollar steering wheel built by the homeowner’s son. New pieces include cozy couches and chairs from Youngs Furniture and modern lighting from Wolfers Lighting in Massachusetts. The grays, creams, and browns with hints of green that one sees outdoors are reflected indoors. The splash of blue of the sea shows up as handmade, peacock blue-green pottery tiles that are used for the kitchen backsplash. The tiles are as “glitzy” as the homeowner gets, says Stokes.

The kitchen showcases the homeowner’s pottery collection on white open shelves. The room is meant to be airy and light, although the lower kitchen cabinets are painted the same seal gray as the front hall. Stokes chose the color because she felt the pottery shouldn’t be the heaviest thing in the room. There needed to be something to ground the space. Ross Anctil, a third-generation cabinetmaker from Lewiston, built the kitchen cabinetry as well as a generous pantry, whose doors open on to a small room with shelves and pull-out drawers.

Steve and Miranda Batiste, dear friends of the homeowner, live in the farmhouse up the road. They make and sell custom wooden bathtubs through their business, Bath in Wood of Maine. The homeowner didn’t want a wooden tub for her property but hoped to feature her friends’ craftsmanship, so her son suggested that the Batistes make the kitchen island countertop, which is now a large, elegant piece of walnut. Elsewhere, the kitchen countertops are an Imperial Danby marble.

In the spirit of carrying the past into the present, Stokes designed bed headboards that Clayton Philbrook of Cape Elizabeth made from wood salvaged from the original cottage. Philbrook is also responsible for an open powder room vanity of Stokes’s design that is composed of reclaimed barn board, an old farmhouse sink from Portland Architectural Salvage, and a custom black walnut soap tray.

Stokes and the homeowner picked some unusual pieces for the house, including lamps whose bases look like ceramic basket weave, jute cubes that can be used as foot rests or seats, and a black and white spread for the owner’s bedroom that has an almost tribal feel and works well with the eggplant gray of the walls. But these choices aren’t about making the house suddenly what it doesn’t want to be—trendy and absolutely of-the-moment. Instead, Stokes says, the idea is to create “the new vintage,” something that will look, in the future, like a great part of the past. 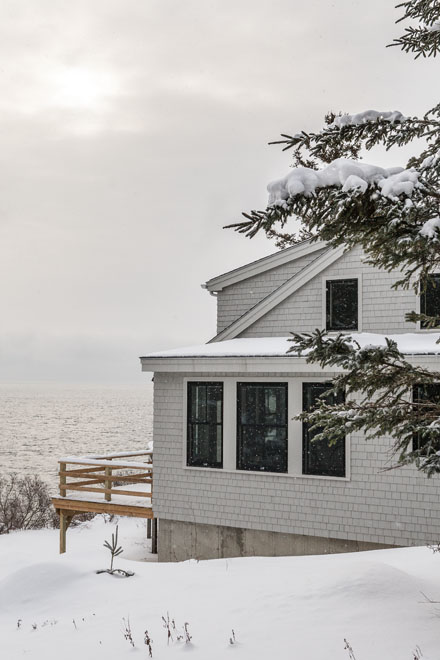 The cottage with a new shed roof and open ocean views. 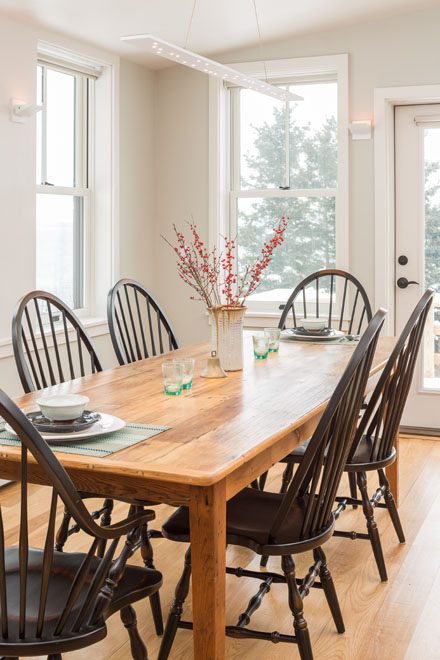 Black Windsor chairs surround a table of old barn wood from European Country Antiques in Cambridge. The minimalist light, purchased at Wolfers in Massachusetts, was chosen in part because it doesn’t block the window views and offers a contrast to the furniture.