On a Poland Pond 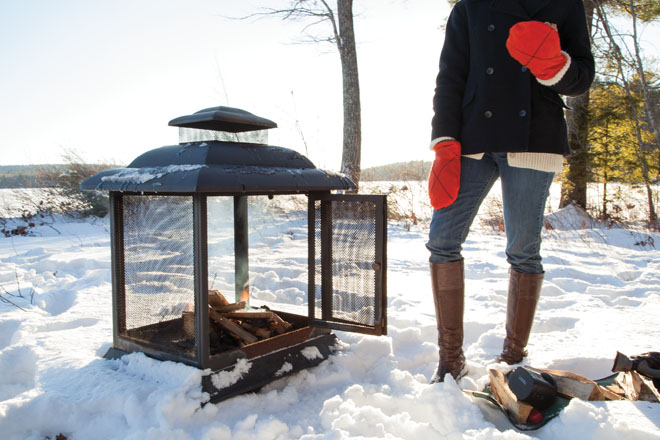 Last year, when 15 friends came to ice-fish, they gathered on a circular snow bank Tony carved out around the shorefront fire pit. “With the fire cranked up and the sun out, it’s warm enough,” he says. The wife’s mittens, made from waxed cotton canvas with liners stitched from vintage wool military blankets, are from Governor Baxter in Topsham; the thumbless design allows the wearer to make fists for warmth. 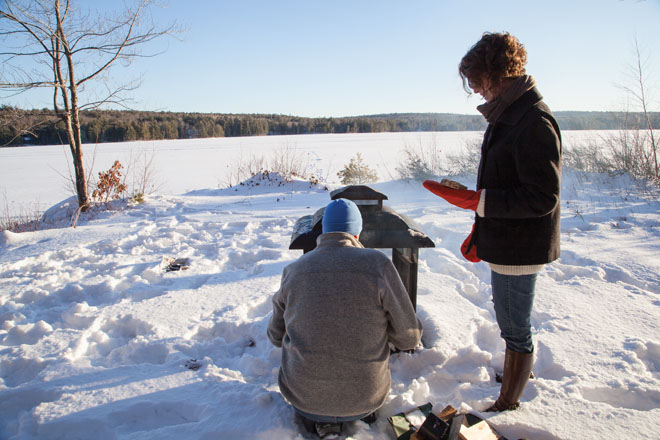 The homeowners start a fire on a bone-chilling day at their Upper Range Pond home. 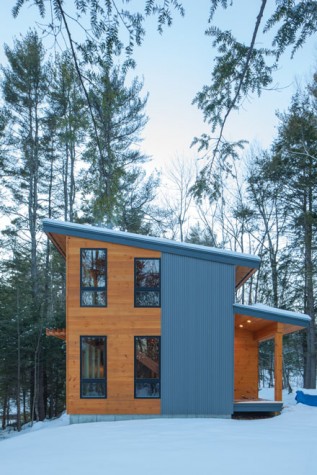 The metal panel on the eastern side of the house wraps around the entry façade and fills in the space between the roofs. Horizontal boards beneath the lower roof “bring down the building’s scale, creating a welcoming approach,” says architect David Matero. 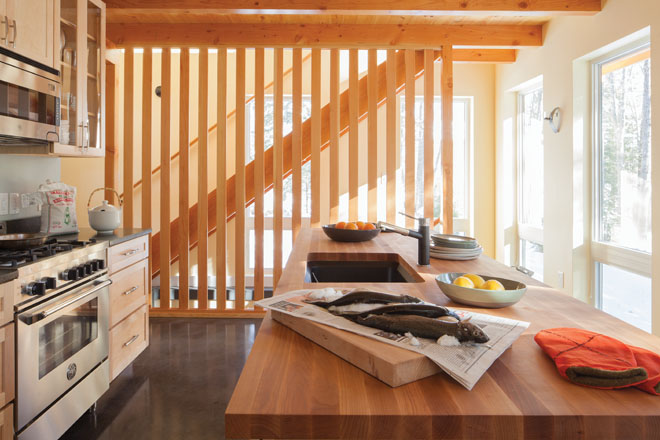 A slatted Douglas fir partition lets morning light into the kitchen. Hammond Lumber in Belgrade supplied the maple cabinetry and Mombasa granite counters in the kitchen and bathroom, as well as the maple island top. Day’s Concrete Floors in Monmouth provided the flooring. 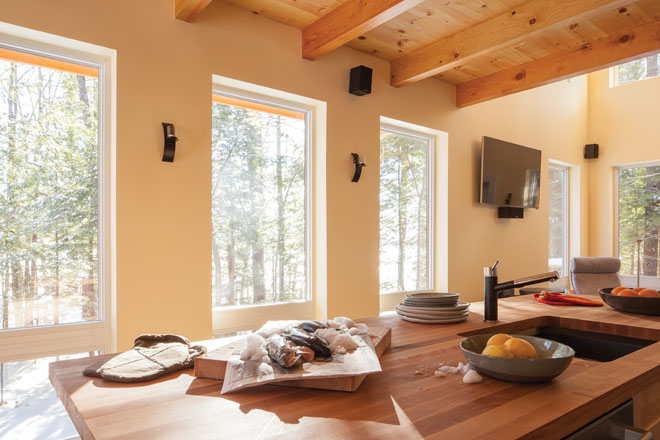 The kitchen’s long maple island doubles as a dining table. 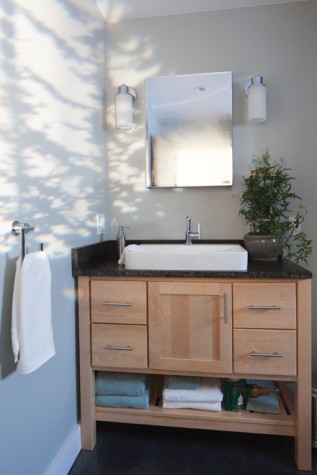 In the bathroom, seamless concrete flooring enables a handicapped relative to wheel easily from sink to shower. 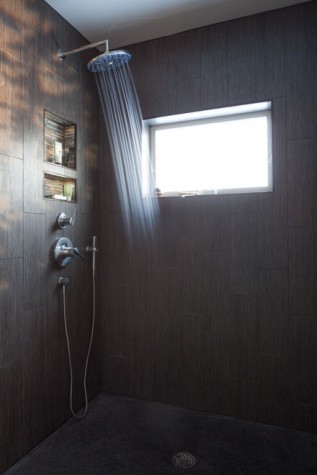 urfee’s Flooring Center in Brunswick supplied the shower tile, which has the cozy effect of wood paneling. 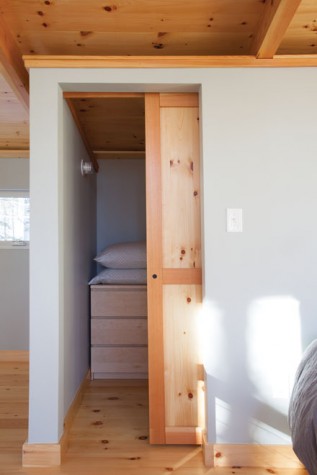 A walk-in closet large enough to house a pair of dressers keeps the owners’ bedroom feeling clean and spacious. 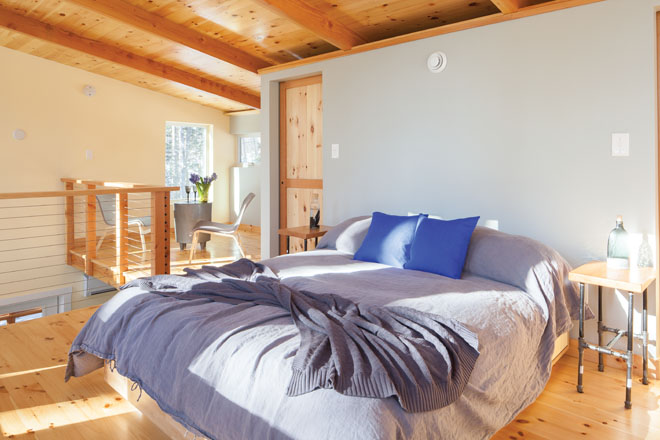 To warm up the expansive owners’ bedroom, Matero and Bath lighting designer Greg Day tucked LED spotlights into a fir valance that runs along the back wall and over the closet. The cobalt pillows are from Tröskö.

A modern, modest cottage that can handle a crowd.

For Tony and Jo Grantier, finding their ideal lakefront property seemed about as likely as snagging an eight-pound trout: possible, but probably a long shot. The Brunswick couple searched for three years for an undeveloped lot with good swimming potential on a southern Maine lake, “but there just isn’t much land available here,” says Tony. “We thought we’d wind up buying a camp and renovating it, which would have been great, but we’d probably still be looking for land.” Then, in 2013, a one-acre plot on Upper Range Pond in Poland appeared on the market. Situated on a wooded slope, the site had a small private beach and a 30-by-40-foot buildable footprint mandated by zoning regulations. “Some people who were checking out the place the same day that we were walked away because they wanted to build something bigger,” says Jo. The Grantiers’ response to the restrictions: “Perfect.”

Long before they had the property, the couple had a vision of their dream retreat. Tony found plans online for a 500-square- foot shed-roofed home with a loft and wall of windows on the front façade, which was depicted in a watercolor rendering displayed on the website. “For years, he’d sit in the evenings and stare at this little color printout,” says Jo. “The sleek, simple design spoke to both of us, and we wanted a small house to minimize costs and maintenance.” To accommodate their friends and family members, however, they knew they’d need to expand the layout. Working with Bath architect David Matero, the couple settled on a 1,000-square-foot cottage that encompasses an open kitchen-living area, guest room, and bathroom on the first floor and a spacious owners’ bedroom in the loft overhead. There’s a screened porch and deck off the living room, and the basement has infrastructure in place for a future guest suite, rec area, and laundry room.

Tony’s parents, along with his sister, her husband, and their three boys, frequently stay overnight. “This is a great place for kids because, in addition to the swimming area, we have a little cove filled with frogs, turtles, and ducks, and we’ve seen osprey, herons, and kingfishers,” says Jo. On Labor Day, the couple hosted a pig roast for 40 people. “At one point, there were probably 30 heads bobbing in the water—it looked like a summer camp,” she says. At this time of year, guests come out to ice-fish, skate, and cross- country ski on the frozen pond. “Part of the reason we built this is to have an excuse to see people,” says Tony.

Sticking with the couple’s idea of a monoslope structure with an emphasis on glass, Matero swapped the uninterrupted banks of windows in their plan for a wraparound grid of seven-foot-tall windows concentrated on the lake-facing southern façade. The areas between the openings allow for more insulation, increasing the home’s efficiency, and provide spots for candle sconces and an ovoid Morsø woodstove. On the southern exterior wall, the stove’s steel pipe is integrated into a wide band of vertical corrugated metal siding, juxtaposed with horizontal pine shiplap for maximum contrast. Varying combinations of metal, wood, and glass play out across the planes, creating an artful geometry of open and solid shapes reminiscent of a Piet Mondrian painting.

To comply with height restrictions, the building had to maintain a low profile, a fact that’s hard to reconcile when you’re in the living room, gazing up at the open- timbered roof that crowns the L-shaped loft. The framing, composed of tongue-and-groove pine decking layered on top of Douglas fir beams, provides more interior height than a drywall ceiling. And the “undulating appearance” of the exposed timbers, repeated in the primary spaces downstairs, contributes to an overall sense of loftiness, says Matero. To give the tongue-and-groove a modern look, Brunswick builder Matt Senecal and his project manager Steve Lunt of Senecal Construction Services stacked two sets of boards and turned the furrowed sides inward, leaving the smooth surfaces exposed. “The alternative was having the boards custom-milled, which would have been far more costly,” says Senecal.

In the entryway, fir stair treads float, one above the other, like a ladder stretching skyward. Through the riser-less planks, you can glimpse clouds and luminous slivers of lake between the evergreens framed in windows on two sides. Vertical fir slats separate the staircase from the kitchen, creating the effect of sunlight filtering through bare trees. At the opposite end of the space, a fir-trimmed cable railing subtly circumscribes the loft that overhangs the living area. “These elements needed to be as airy as possible, to keep the home from feeling cramped,” says Matero.

Slatted fir sunshades, placed over the lower windows on the southern façade, and the home’s three-foot roof overhang control the incoming light, letting rays stream in during the chilly months, when the sun is lower, and providing shade in the summertime. The laths also juxtapose intriguing angular shadows with the organic patterns cast on the building by the surrounding trees. “A house is very static—amplifying the way light plays on the walls makes it come alive,” says Matero. Polished concrete floors on the main level bounce the sunbeams around inside the home and soak up the winter sun, creating toastiness underfoot; in the summer, the masonry absorbs heat in the air, producing cooling effects.

To warm up the expansive upstairs, Matero and Bath lighting designer Greg Day devised a fir valance that runs along the back wall of the owners’ bedroom and over their closet. LED spotlights placed inside the cavity target the ceiling, aggrandizing the height and canopying the space in a cozy glow. In the evening, the radiance emanating from the massive windows has a moths-to-a-flame effect on visitors. “Looking up from the beach, you feel this pull toward the house,” says Matero. Concealing the fixtures in the valance was more cost effective than installing display-worthy lamps. Wall- or ceiling-mounted fixtures also would have distracted from the architecture the team wanted to highlight. “When possible, my preference is always to let the surfaces be the light source,” says Day.

Tony swims in the pond until early November (he was contemplating a dip on the 40-degree fall day this reporter visited), then jumps back in a few weeks after ice-out in the spring. In warm weather, the Grantiers and their guests have meals at a long trestle table on the screened porch. Soon, they’ll also add to the maple kitchen island a hinged panel that can be flipped up to accommodate a crowd. In the meantime, the couple has had to get creative with seating arrangements. Last year, when 15 friends came to ice-fish, they gathered on a circular snow bank Tony carved out around the shorefront fire pit. “With the fire cranked up and the sun out, it’s warm enough,” he says. The group caught only one bass that day, but no one minded. “For us, the sport is more of a social thing—being together and enjoying all of this,” he says, gesturing toward the shining stretch of lightly rippled water fanned out before the beach. A fish story would be a mere fringe benefit. 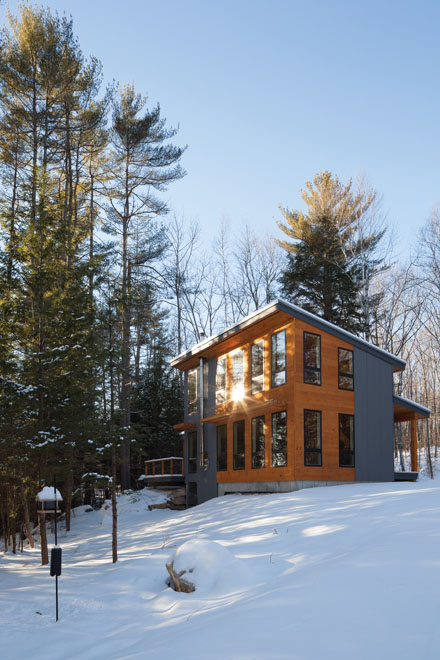 To comply with height restrictions, the house had to keep a low profile. Vertical corrugated metal siding, juxtaposed with horizontal pine shiplap, creates the illusion of a loftier structure. 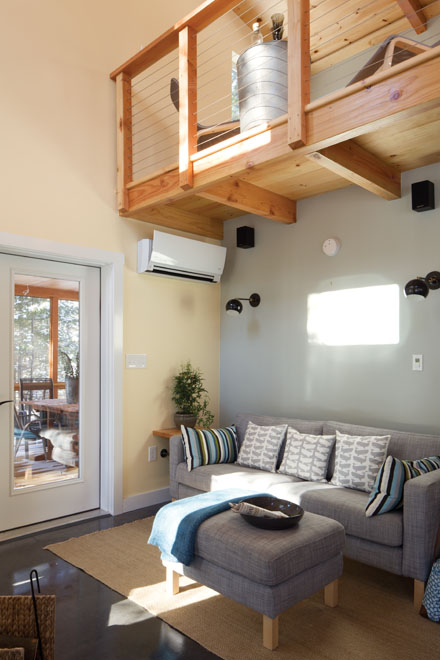 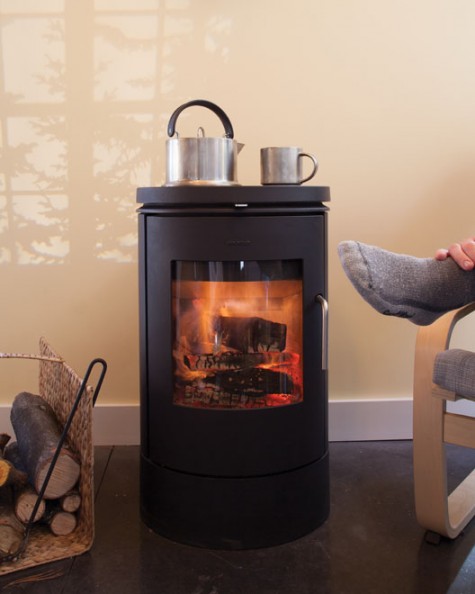 A compact Morsø woodstove located in the living room can heat the entire 1,000-square-foot cottage.