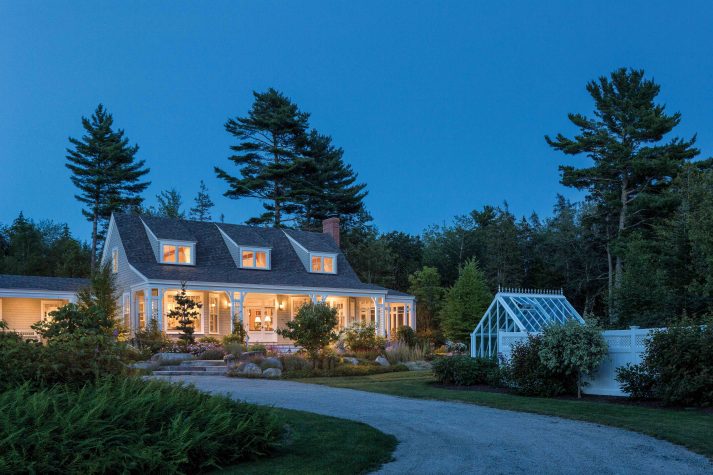 The owner of this (ever so slightly) inland cottage is a Maine master gardener and horticulture judge, which explains why she was eager to move from her previous summer home to this wind-sheltered plot of land on Mount Desert Island. 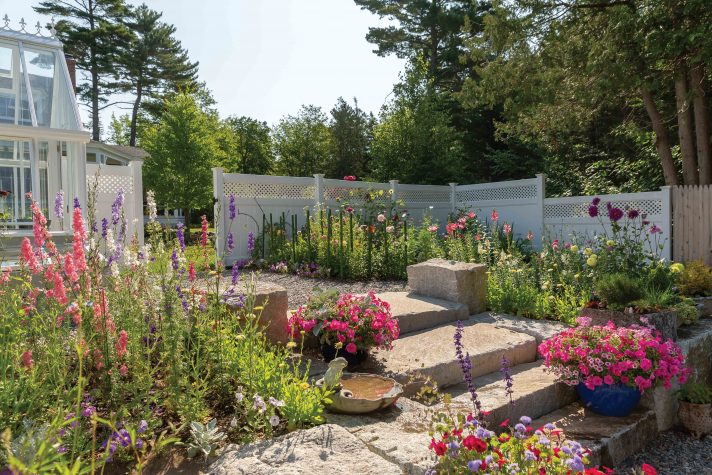 Designer Terry Pylant of Historical Concepts had worked with these homeowners before, and he was excited to bring his research-rich process to Maine. The goal was to create an airy, bright home that speaks to the landscape and to the history of the community. 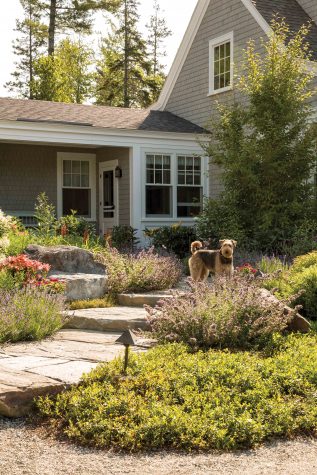 “It’s fun to push the limit,” says the homeowner of her garden. While Mount Desert Island falls squarely into zone 5B, she has a lot of luck with plants that typically thrive in zone 6, including English lavender, a “notoriously hard plant to grow.” 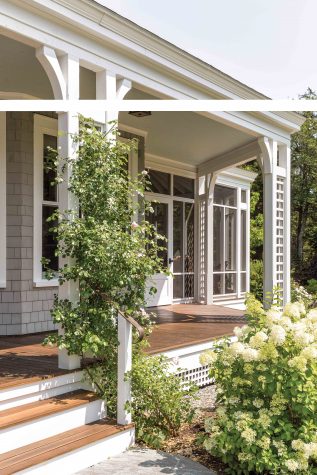 The trellis-inspired woodworking was, according to Pylant, a “very intentional part of the design.” He says, “We saw some great old photographs of houses from Maine that had that type of latticework.” 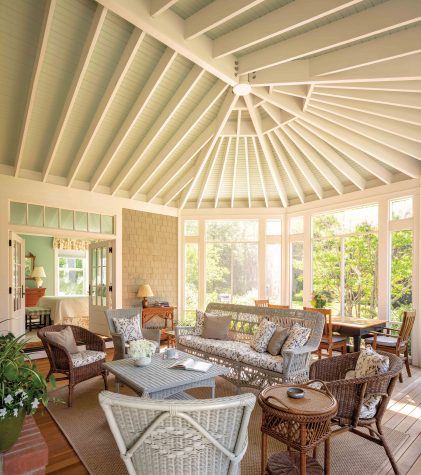 One problem with square or rectangular screened porches is that, depending on where you’re sitting, the screen can obscure the view. This octagonal porch ensures that every seat in the house is a good one. 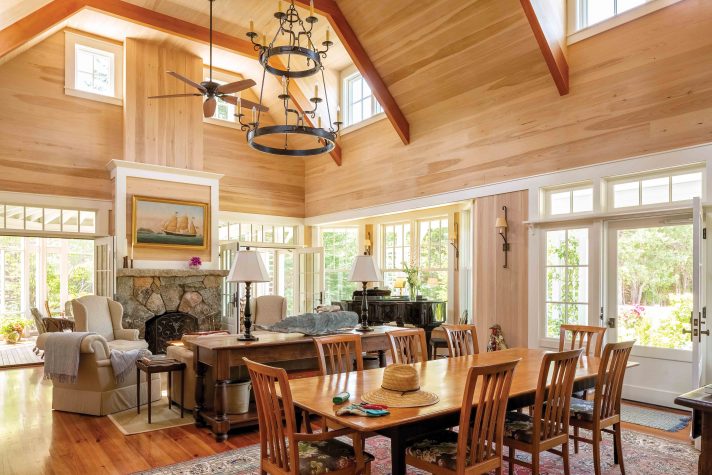 Builder Jake Jacobson “wasn’t necessarily a fan of transom windows before,” he says. This house, with its proliferation of windows, is drenched in light. “I realize now what the transom windows do is form a horizontal band around the rooms, especially the great room and the kitchen. It really brightens it.” 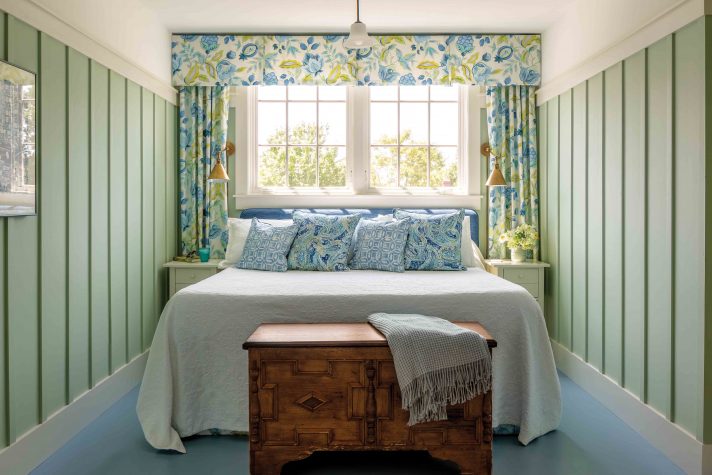 “I like to be able to bring the colors and combinations of colors that you see outside in my garden inside,” says the homeowner, who worked closely with designer Ruth Edwards to decorate the cottage. 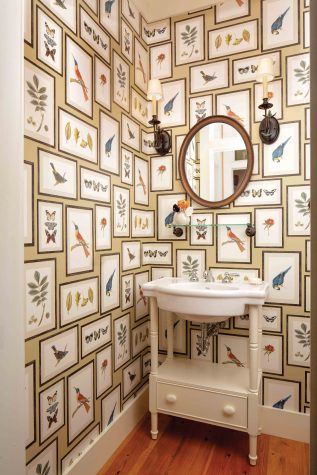 The homeowner had been collecting vintage fabric for years, and Edwards helped cull through her collection to choose the right prints for each room. “She found us fabulous wallpaper,” the homeowner says of Edwards. 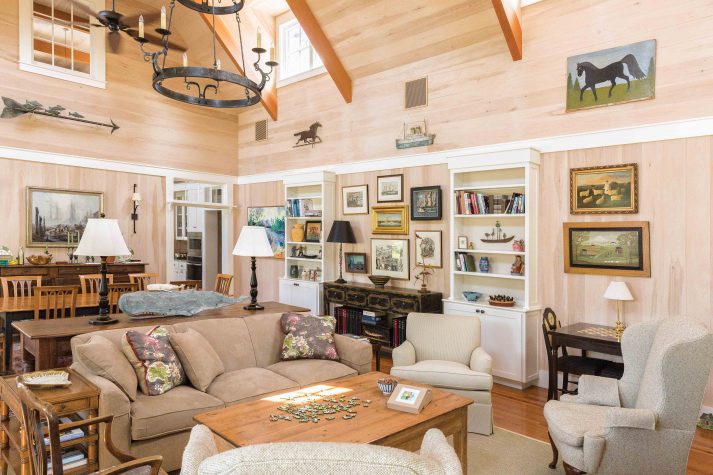 “Many of the objects were theirs,” says Edwards. “I helped her go through everything.” The house has a “very comfy look.” “I use that a lot here in the south. It lends itself to southern architecture.” They sourced quite a few items from Scott Antique Market, which is conveniently located near the Atlanta Airport. 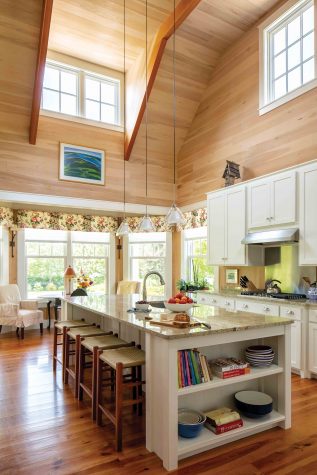 Stained wood floors add warmth to the white kitchen, and the heart pine paneling draws the eyes upward to the soaring fir beams. “We kept the colors inside neutral,” says the homeowner, “so that I could bring my most colorful blooms in.” 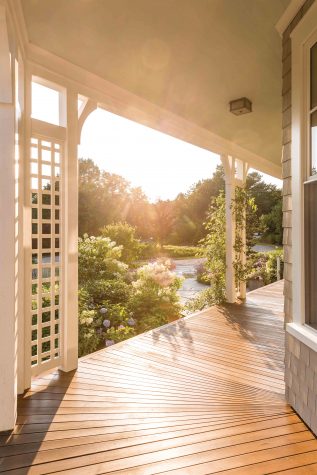 Pylant designed the porch to have generous, wide steps for lounging. “It’s more welcoming,” he says. 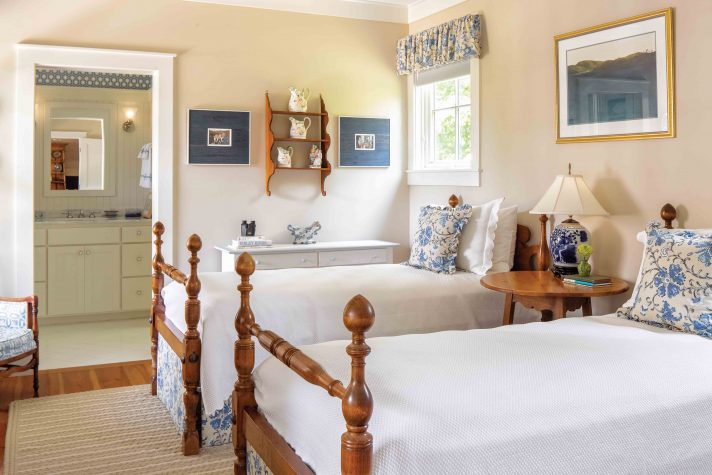 Of course, a summer cottage must have space for guests. This room features vintage fabrics from the homeowner’s collection and twin beds that were built in 1950 for the homeowner’s mother. 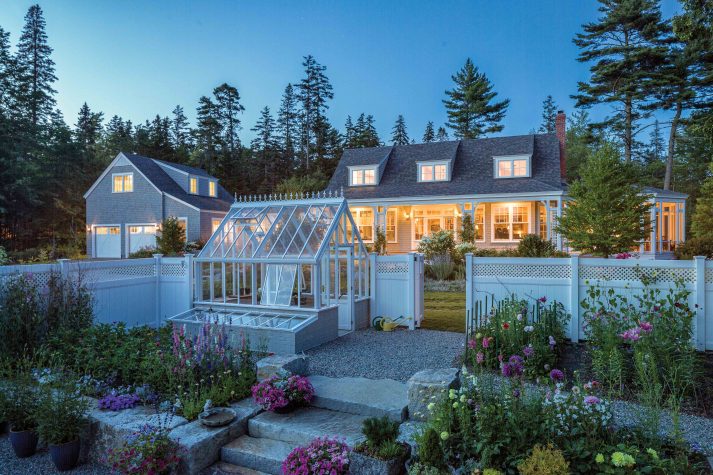 Every year, the homeowner likes to experiment with new plantings—new colors of peonies, new types of sage, new herbs, new echinaceas. “Our house faces south and west,” she explains. This is why she was happy to move off the water. “My yard is really warm. I can grow so much.”

It was hard to believe the couple would leave their garden behind. She’d been working on it for three decades. And yet the house on Mount Desert Island was no longer a good fit. They were parents with grown children, and they no longer needed the space. “We had been there since the early ’90s,” says one homeowner. “When our six children went off, we decided to downsize. And when we saw this little piece of property come on the market, well, we loved it.”

It is also hard for some people to understand why they would leave a gracious waterfront house for a smaller inland lot. Yet it makes sense if you know the family, espeically if you know the wife—both her and her flowers. “People asked me, ‘Oh, aren’t you sad to move off the water?’” she says. “But I was excited. It meant my yard would be warmer. I would be able to grow some things much more successfully.”

Now, this horticulture judge and Maine master gardener has a summer home near her favorite golf course, near the water, and near the woods of Acadia. She also has a summer home surrounded by blossoms, including over 100 types of peonies. They have names like Sarah Bernhardt (a big, blowsy light pink variety), Festiva Maxima (white with delicate brushes of magenta), and Kansas (an early deep pink, almost red, bloom). The peonies are “everywhere on the property,” she says proudly. “I love them. I love their blooms.” Plus, the deer don’t like them, which is always a consideration when planting on Mount Desert Island. (She’s also had success with other deer-defying plants such as Calamintha and nepeta, both members of the mint family.)

But in order to create this lush lavender-scented and peony-decorated garden, the couple first had to clear the land, blast the ground, lay a foundation, and build a house. For this, they called in Historical Concepts, an architectural firm they had worked with before in South Carolina, and Jake Jacobson, a local builder who has been erecting houses on Mount Desert Island since 1974. “I haven’t had to drive more than five miles from my house to a job in years,” he says. “I’ve been very lucky.” In the past, Jacobson’s local knowledge has provided a good counterpoint to out-of-state architects, but in this case, Historical Concepts’ architectural designer Terry Pylant was excited to make the trek from Georgia to Maine to see the site, learn the neighborhood, and find out ways to embrace the visual customs of the region.

“Everything we do is precedent based,” Pylant explains. While this job was very garden-centric—“we thought constantly about how the house would relate to the terrain, particularly her garden,” says Pylant—it was also important that the structure relate to the homes around it. It had to speak to the knoll on the site, and the neighbors down the road. To that end, Pylant researched “everything from John Calvin Stevens to local precedent,” he says. “Whenever we do a project like this, we go around and take pictures of other homes in the area so we can pick up nuances and details of the vernacular.” Although he says there is “nothing complicated or complex” about the final design, Pylant’s drawings were holistic and detailed, filled with small references to place, like the columns that bracket the porch, inspired by old photographs of Mount Desert Island cottages, and the geometric latticework, which calls to mind not only early 1900s Bar Harbor cottages but also the shape of a garden trellis. “That’s a defining element of the house,” says Pylant of the repeating square forms that decorate the porch. “From a carpenterial standpoint, the detail of the plans really stood out to me,” says Jacobson. “While they weren’t on the site as often as some architects, they had really well-outlined plans. It takes skill,” he says, both to draw out these precise elements and to execute them. “It’s all about the team, the whole way through,” Jacobson adds.

Another member of the team was interior designer Ruth Edwards, who drew inspiration from Sister Parish to create a comfortable, elegant interior filled with soft floral details and references to the outdoors. “Sister Parish had a house in Winter Haven, and I’ve always loved everything she did; she’s influenced so many great designers,” Edwards says, and cites Mark Hampton and Billy Baldwin as further sources of professional inspiration. Fortunately for Edwards, the homeowner had a stockpile of fabrics that she had collected over the years: overruns purchased from specialty retailers like Brunschwig and Fils and Clarence House. “Some of it didn’t work, but we used so many of her prints,” Edwards says. There was one beige toile print that she had “tons and tons of,” Edwards recalls. “I said, let’s use every scrap.” They upholstered the headboard and made matching curtains with the creamy rich floral. To add a bright counterpoint to the neutral fabric, Edwards painted the walls a robin’s-egg blue, which beautifully matches the homeowners’ vintage Scandinavian cabinet. Like much of the furniture, this antique had been with the family for years. “I inherited it from my mother,” she reveals. “We didn’t have to purchase much furniture,” Edwards adds. “We used all of their things from the old house, and much of my job is editing and placing things in the right rooms.”

While summerhouses often have the owners’ suite tucked away from the action, this house is a bit different. The couple no longer needed to worry about rambunctious kids keeping them up at night, so Pylant was free to place their sleeping quarters right next to the large octagonal screened porch. “They said there had to be a place they could be outside but also escape the blackflies,” Pylant says. “That was the intent with that space, but we made it octagonal,” he explains, because screens, when viewed at an angle, tend to “dilute the view.” In this masterfully built room, you can sit in any of the wicker armchairs or sofas and look out toward the garden. This porch is linked to the bedroom via a set of French doors, which sit below a long transom window.

“We wanted our house to be welcoming and, first and foremost, warm,” says the wife. “We thought because of the high ceilings that might be a problem, but we had a very talented decorator who helped us create neutral backdrops for my most colorful flowers.” In addition to sourcing what this homeowner calls “classy, wonderful wallpaper,” Edwards also made sure her color choices wouldn’t clash with any of the blooms. Now, the master gardener can spend her mornings cultivating tangerine orange echinaceas, fuchsia peonies, and purple zinnias and her afternoons cutting, trimming, and arranging the stems. “I’m always experimenting with new flowers, new colors,” she says. They provide a source of joy, a source of warmth, and a burst of vivid life that makes the move to a few feet inland entirely worth it. “This house is totally perfect,” says the homeowner. “It has everything we need in our life.” 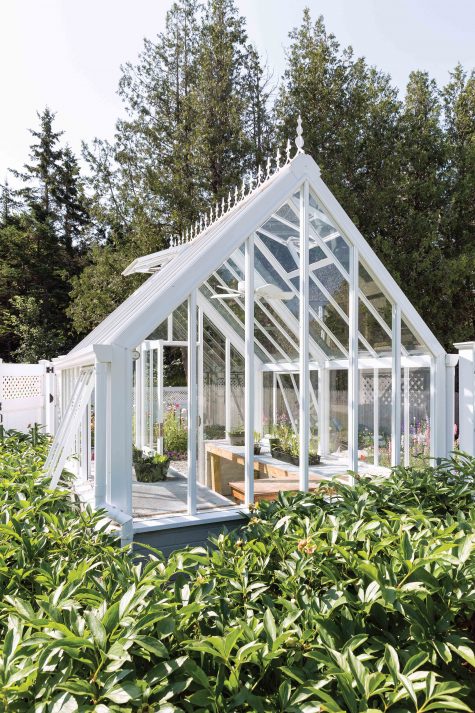 “The greenhouse is something [the homeowner] did,” explains Pylant. “We did a few minor sketches and details, but it is something she envisioned. She knew what she wanted to have.” 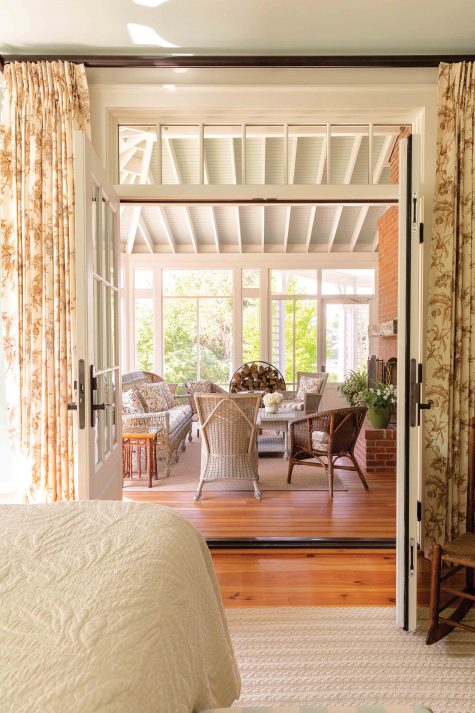 The owners’ suite opens into the great room, which is a rather unusual layout decision. However, with the homeowners’ children grown, it made sense to treat this cottage like their private getaway.