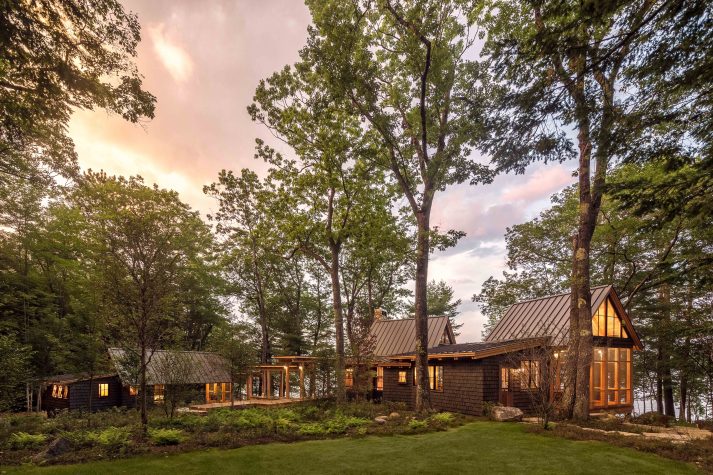 Winkelman Architecture’s house of many parts: Two eastern white cedar–peaked volumes with metal roofs by Guy Kittel Construction—a screened-in deck and a living area are connected by a shingle-clad, shed-like structure accommodating kitchen, powder room, and home office. Below is the owners’ suite, built on the footprint of the old garage. 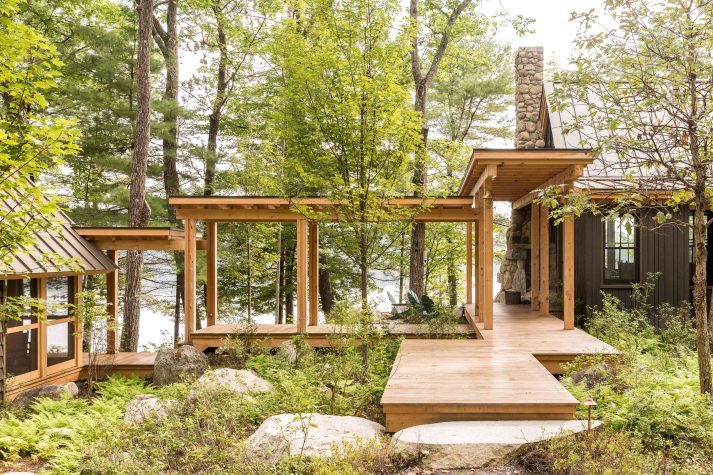 The connector is a covered walkway that rethinks the site’s most ubiquitous natural resource, wood, and the canopy effect the trees create. 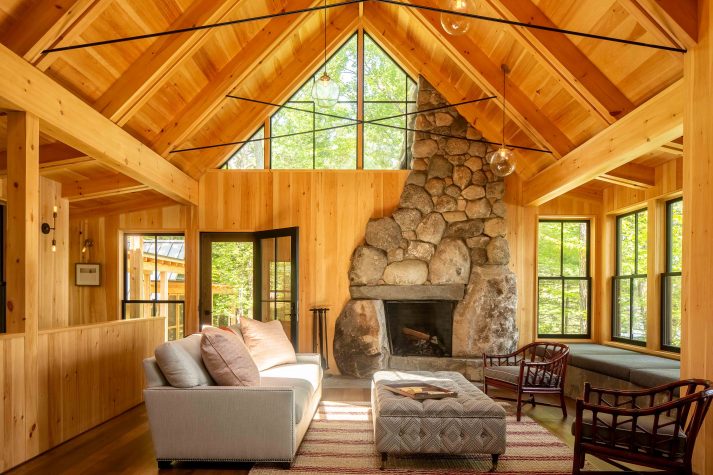 The built-in bench in the pine-paneled living space looks weighty, but is actually hollow to accommodate storage. The owner shopped for the furnishings, including the Pottery Barn sofa, vintage McGuire chairs, and a custom ottoman she had fabricated in California. The pendants are Lucent Lampworks (through Etsy), the custom fire screen is from StandFast Works Forge. A fieldstone fireplace wraps one side of a triangular window—one of the many Marvin windows used in the house to maximize lake views. 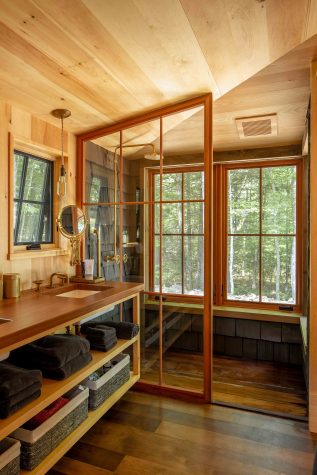 Rather than opt for the expected tile shower in the master bath, Joanna Shaw of Winkelman Architecture specified stained cedar shingles, creating the sense of an outdoor shower. All bathroom fixtures and fittings are from Watermark. 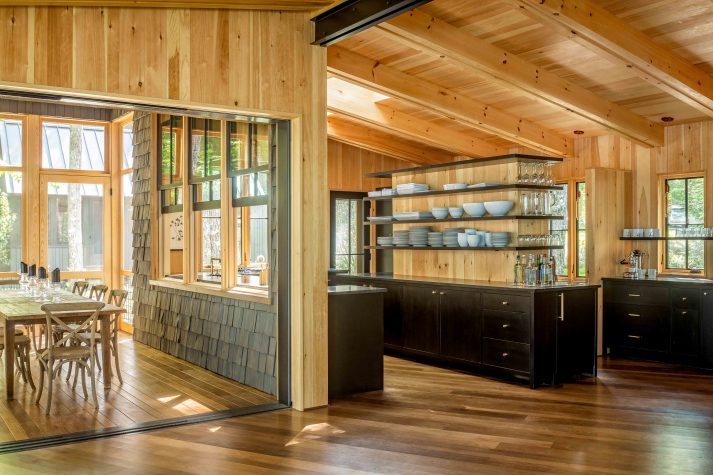 The kitchen features dusky-colored custom cabinetry fabricated by Warren Construction Group. The color is actually three layers of dark stain. Windows on the deck side function as pass-through for serving. Open shelving alleviated the heaviness of upper cabinetry, and living brass fixtures that acquire patina with age impart warmth. 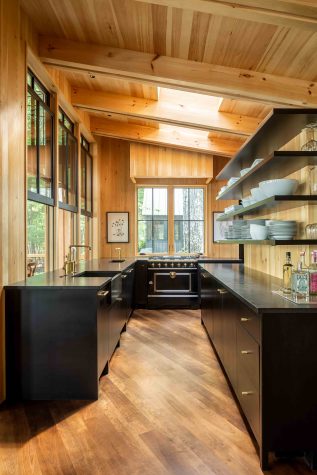 The La Cornue stove was acquired from a wholesaler in New Jersey, and honed Pietra del Cardosa countertops (a kind of schist) came from Stone Surface in Bridgton. 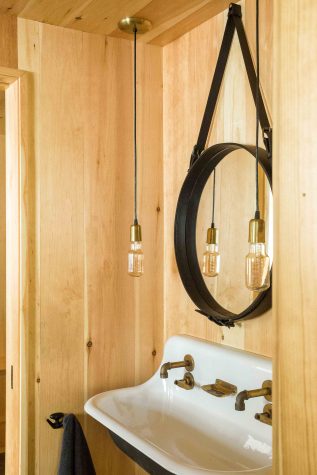 A contemporary mirror and Hammers and Heels pendant light hang above a traditional porcelain-lined trough sink with Watermark faucets in a guest bath. 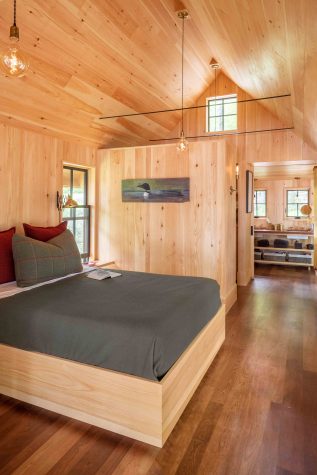 In the owners’ cabin—which features, as elsewhere, floors by Fat Andy’s Hardwood in Yarmouth—a boxy closet separates the sleeping area and bath. 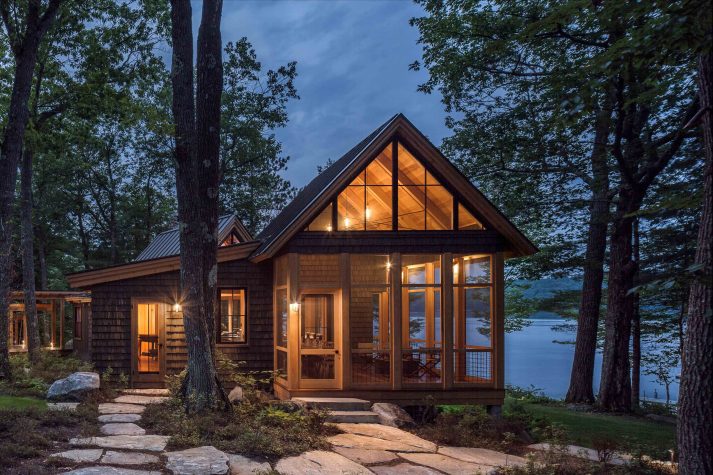 Outside the main house, stone paths landscaped by Richardson and Associates are well traversed by kids moving between the kitchen and bunkhouse (not pictured) for snacks and beverages.

About 11 years ago, a Mill Valley, California, couple in search of a vacation home received a real estate listing from the husband’s father. “If you don’t buy it, I will,” he told them. It’s easy to see why. The idyllic 9.78-acre property in Bridgton had a shady green canopy, 378 feet of waterfront, and a cascading stream that empties with a sonorous rush into Long Lake. “We bought it sight unseen,” says the wife, a fifth-generation Californian. Her husband had grown up in Lewiston, so Maine was already a strong presence in the family’s collective imagination. And, she says, “To have a property like this on Lake Tahoe would have cost millions. Not to mention the commute, with all that congestion; it’s terrible. I could probably be in Maine faster than I could get to Lake Tahoe. It turned out to be a dream property.”

Not that the house sitting on this beautiful land inspired much awe. A camp probably built in the 1930s, it was composed of a couple of weather-beaten shiplap-sided buildings and a boathouse. The first summer, the couple slept in a bedroom, but the three children (today ages 22 to 31) flopped in the attic. “We made it work,” says the wife. “At one point I slept 14 kids up there.” The children’s lodging arrangement was addressed the following year, when the couple engaged Winkelman Architecture to design a more commodious bunkhouse and Symonds Builders to construct it. Knowing this was just the first step in a complete rethinking of the property, they clad the new structure in plain board that would be easily replaced when a more thorough vision came into focus, evolving over a few more summers.

Eric Sokol, principal with Will Winkelman at Winkelman Architecture, drew up the early plans. Joanna Shaw, a third principal who joined the firm six years ago and eventually took over the project, explains, “At the beginning it was a more traditional concept, with everything—public spaces and bedrooms—all in the same main house. What inspired us to pull it apart into separate buildings was a respect for the camps around this area and all the old oak trees on the property. We fit the pieces among the trees where we could.” The new concept called for leveling the original house and building another on its footprint that has one large, multipurpose bedroom downstairs. (With a queen-size bed, two built-in singles, a day bed, a sleepable window seat, and lots of floor cushions, this structure can accommodate a lot of snoring souls.) An owners’ suite cabin, erected on the site of a dilapidated old garage by the stream, would connect to the main house via a covered walkway. “You can make as much noise in the main house and the bunkhouse as you want, and we won’t hear it,” the wife says happily.

For William Symonds, this layout precipitated some creative thinking. “Since the house had to be nestled among the oaks,” he observes, “it meant there were lots of challenges just to get going. The excavation, foundation, water systems, and underground utilities had to be worked around them.” (Shaw notes, “Part of the foundation is cantilevered to accommodate the roots.”) The interior also presented challenges. The main floor was basically a sprawling great room with a kitchen tucked into one end. And because they wanted to capture the spectacular lake views—the curved shape of the house is primarily informed by this desire—there were large windows all around. “There aren’t really any interior partitions,” says Symonds, “so just hiding venting and plumbing became an issue.” Solution? Symonds and his team ran it all through the six-inch insulation pack between ceiling and roof.

The wife had grown up in a Craftsman-style house, but, she says, “My parents really liked Frank Lloyd Wright, so I wanted something more contemporary—no crown mouldings or unnecessary adornments. It had to be natural, connected to the land. We already have a suburban Craftsman home in Mill Valley. This needed to be more rustic, but with modern amenities.” Shaw’s response was a ramble of clean-lined buildings with exteriors that alternate cedar shingles with plank siding, all topped by standing-seam metal roofs. It’s a modernized version of the region’s rural vernacular.

“We wanted as much daylight as possible in the spaces,” adds Shaw, “especially in the vaulted areas so it would wash the rooms with light.” This led to a tricky maneuver in the living room where a triangular gable window met the fieldstone fireplace by G.M. Libby and Sons. A channel had to be chiseled out of the stone to “receive” the window, says Shaw, something Symonds’s talented team did while leaving an inch of leeway for the building’s natural contraction and expansion with variations in temperature and humidity.

The interior of the main house is open and airy. A roomy living–dining space with an adjacent screened porch line up along the lake-facing wall. “The porch and dining room floors are flush to allow the potential of putting two tables together that move from inside to outside,” says Shaw. This was a direct response to the homeowners’ summer lifestyle. “When we’re here,” says the wife, “it could be two of us—or 12 or 24. This way we can all sit at one long table, which is very nice.”

A kitchen tucks into the opposite wall, parallel with the porch. Shaw and the clients made the bold decision to opt for a triple layer of black stain on all the cabinetry and open shelving. They paired it with countertops of gray honed Pietra del Cardosa stone coated to darken it almost to the cabinet color. Black, says the wife, “makes everything go away.” She adds, “The aesthetic should be about the trees, the lake, the environment.” Plumbing fixtures and pulls are all living brass, which gives the house warmth, unlike stainless steel.

Shaw points out, “Open cabinetry creates a veil wall rather than being a heavier presence that would have been overwhelming,” especially in this color. “I like keeping the weight of the storage low. It makes the kitchen feel more furnished, like a room that you happen to cook in.” The results thrilled the owner, who says, “I prefer my kitchen in Maine to the one in California.”

“We think from the building footprint down to the pillows,” says Shaw of the decor, noting that her client “has a great design eye and led that conversation.” The wife chose all the fabrics and furnishings, giving samples of what she liked and asking which Shaw thought would work. The wife’s uncle, in fact, who was in the furniture business, had been one of the first to import Scandinavian modern furniture to the United States. He also enjoyed a close relationship with the McGuire Furniture company. Not surprisingly, the homeowner unearthed several of the firm’s pieces for the house. Other pieces, like the huge living room ottoman, were custom fabricated. “They may look elevated,” she says, “but they’re all upholstered in Sunbrella fabric, so I can’t get upset if a kid comes in and sits on it with a wet bottom.”

The camp today is an eminently functional, adaptable retreat and welcomes a multitude of family and friends. “I felt like I was running a B and B last summer,” says the wife. “But that’s what it’s about: bringing people together.” 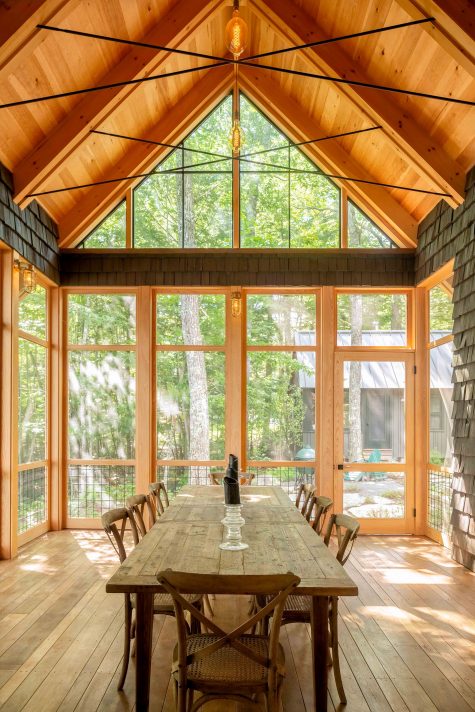 Sections of the home’s eastern white cedar cladding was stained black, creating a graphic modern contrast in the screened rooms on the exterior. 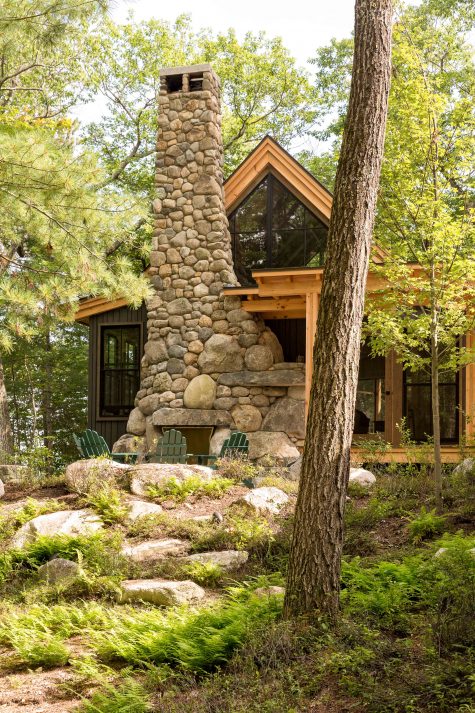 A fieldstone fireplace (opposite) wraps one side of a triangular window—one of the many Marvin windows used in the house to maximize lake views. Sections of the home’s Eastern white cedar cladding was stained black, creating a graphic modern contrast on the exterior.