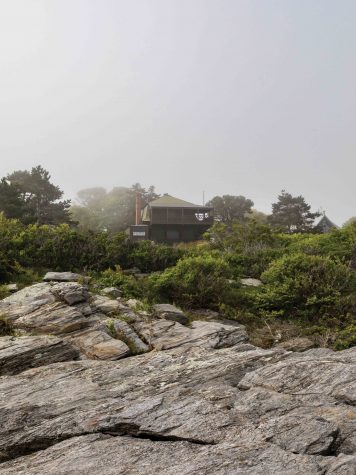 Winslow Homer Studio as seen from the Cliff Walk The celebrated American artist Winslow Homer lived and painted in a converted carriage house from 1884 to 1910. 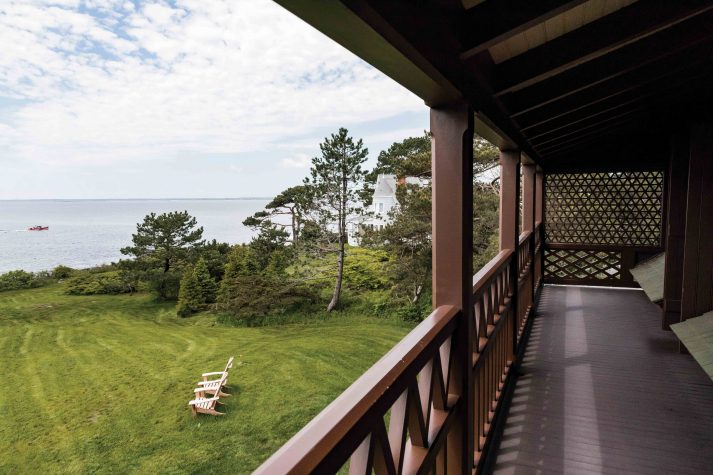 Lobster boat in the distance as seen from the upstairs porch at Winslow Homer's studio Architect John Calvin Stevens added the wraparound second-floor balcony, which Homer called the "piazza." 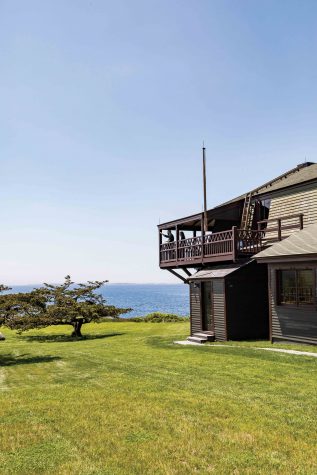 Winslow Homer's studio The Portland Museum of Art acquired Homer's studio in 2006 and restored it over a period of five years, a project that included repainting the exterior with the original dark Arts and Crafts–era colors.

The website for the Winslow Homer Studio includes a live feed from the balcony where the great painter observed the shifting moods of the Atlantic Ocean. On this day, the water is flat calm, with a foamy scrim of surf gently nudging the rocky shoreline of Prouts Neck—not a scene that would have appealed to one of the most important and influential American artists of all time. Homer, who lived and painted here at the end of his long career, was most inspired by the drama of the sea, the crashing, white-capped waves and churning blue water he captured in such masterpieces as Weatherbeaten, Cannon Rock, and West Point, Prouts Neck. “There’s a wonderful sensory element to these late canvases,” says Diana Greenwold, the curator of American art at the Portland Museum of Art (PMA), which owns the studio. “In Cannon Rock, you can ‘hear’ that wave as it crashes, and in Weatherbeaten, the viewer is deposited on those rocks.”

Homer came to Prouts Neck in 1884 after spending 18 months in a fishing village on England’s northeastern coast. “In that fairly unforgiving and stark natural environment, Homer becomes interested both in the fishermen and in the women they leave behind on shore,” says Greenwold. “He is beginning to think about the relationship between the humans making a living out of the natural world but who are also at its mercy.” In Prouts Neck, Homer found a similar landscape and community, albeit one in the process of being transformed by his family. His father and brothers were the first to build cottages in what remains a private summer colony today, where residents include their descendants.

Having first stayed at the summer home of his brother, Charles, Homer decided he needed more privacy and hired prominent Portland architect John Calvin Stevens to remodel an existing carriage house into a humble residence and studio. The building was moved 150 feet away from the main house; one of its three horse stalls became the artist’s bedroom, and the space where the carriages were housed was remodeled into his main living area, with a large fireplace where double doors had been. Stevens also designed the covered, second-floor balcony (which Homer called the piazza), supported by buttresses, one of several features of the building that reflect Arts and Crafts style. Homer later added a single-story painting studio to the northern side, but while artists generally prize northern light, the studio has no windows on that wall because it faces the road, says Greenwold. Already well known when he decamped to Prouts Neck, Homer, a lifelong bachelor, made efforts to discourage intrusions, notably a wooden sign reading “Snakes…snakes…mice!” that he hung on his garden wall.

The handmade sign is now on the mantel above the fireplace in the restored studio, which was purchased by the PMA in 2006 from the painter’s great-grandnephew, Charles Homer Willauer. The museum hired Portland architectural firm Barba and Wheelock to produce a historic structure report, a comprehensive document that detailed how the restoration could be best accomplished within U.S. Department of the Interior guidelines, since the studio was already a National Historic Landmark. Bridgton-based historic preservation architects Craig Whitaker and Don Mills were commissioned to return Homer’s studio to the way it had been in 1910, the year he died. A large cache of photographs and other materials given to Bowdoin College by the Homer family in 1964 was instrumental in the architects’ efforts.

Begun in 2007, the five-year, $2.8 million restoration project included reinforcing the ocean-facing wall with steel to add further support for the balcony, as well as stripping away additions made over the years when the family used the building as a summer cottage. A photo that appeared in the July 1984 issue of Architectural Digest shows a pergola, an entrance porch, modern double-hung windows, and decorative columns on the first floor of the exterior, which were painted a jaunty spruce green with white trim. Benjamin Moore Paints worked with the preservation team to restore the studio’s dark exterior colors, and a large first-floor window facing the sea was removed, replaced with a multi-paned smaller window that replicates the original.

Despite the exterior additions—and modern updates such as a kitchen and bathrooms—the building was in many ways the same as it had been when the artist was in residence. “One of the wonderful things the family did was to keep the painting studio as a shrine to Winslow Homer,” says Greenwold. “People could wander in and out to look at reproductions and books, and get a sense of where and how he worked.” The removal of wallpaper and paint revealed that Homer had used the pine-paneled walls of his studio as a kind of ledger book, noting receipts and sums due, as well as inscribing a quote from the mystery novel The Clique of Gold by Émile Gaboriau: “Oh what a friend chance can be when it chooses.”

When the PMA reopens the studio in the spring of 2021, visitors will hear the sound Homer may have made when he wrote the quote on his wall. Soundscapes are increasingly used by museums to provide a more interactive experience; the one that will be in place at the studio features a pencil scratching on wood; a crackling fire; the footsteps of Homer’s dog, Sam; and a storm passing through. Tours of the studio are limited to 12 people at a time, who travel by van from the museum in Portland to Prouts Neck to spend two-and-a-half hours immersed in the artist’s world. Also new for 2021: a tighter focus on Homer’s later years. His painting room, which has previously displayed references to his entire career, will instead focus on the materials and techniques he used in Maine, including a paint palette (now in the Bowdoin College archives) that paint conservator Nina Roth-Wells and furniture maker John Brandon are collaborating to replicate. Tours will start at the PMA with a viewing of Weatherbeaten, one of 32 oil on canvas paintings, watercolors, and drawings in the museum’s permanent collection. Out at the studio, they can “walk right into that painting,” says Greenwold. “Visitors can make their own connections to the natural landscape that was so moving to him.”

This fall, the PMA expects to open Mythmakers: The Art of Winslow Homer and Frederick Remington, an exhibition curated by Greenwold in collaboration with the Amon Carter Museum of American Art in Fort Worth, Texas, and the Denver Art Museum. The more than 50 works on display will include several of the late seascapes Homer created at Prouts Neck, offering viewers a sense of what the artist experienced in this section of the Maine coast—the landscape that shaped him and that he captured so powerfully on canvas. These later works “became part and parcel of how we understand wilderness, masculinity, and man’s relationship with the natural world,” says Greenwold. In his studio overlooking the sea, Homer secured his position in the American art canon, became an inspiration to the artists who followed him, and made an indelible mark on Maine. 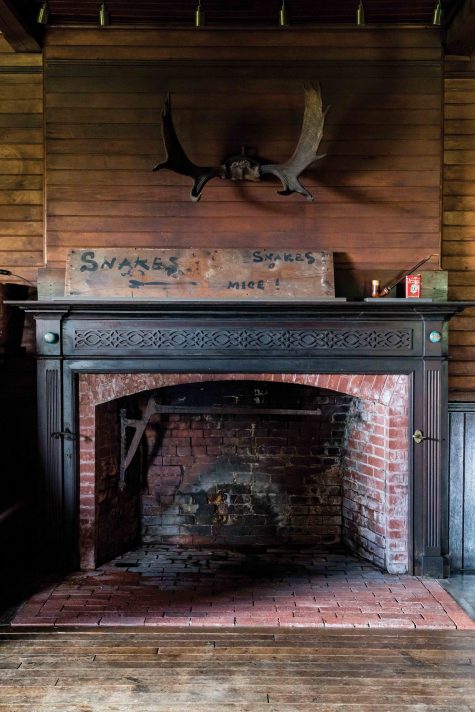 Interior of Winslow Homer's studio Homer made the wooden sign and displayed it on his garden wall to discourage visitors. 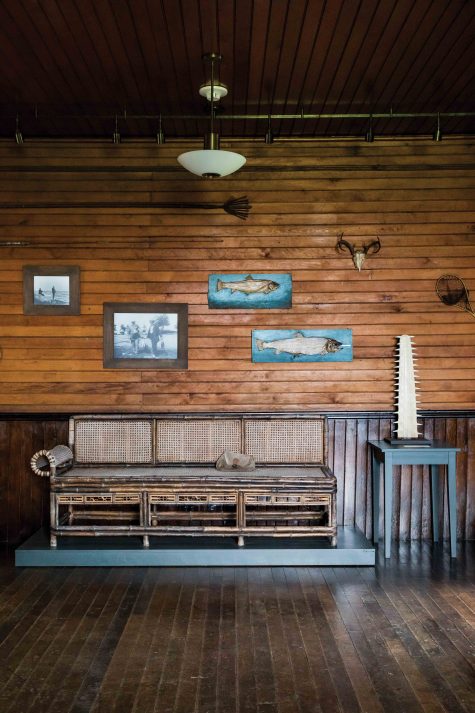 One of the walls in the painter’s living space features his daybed as well as a pair of fish skins and a sawfish bone—evidence of his love of fishing.