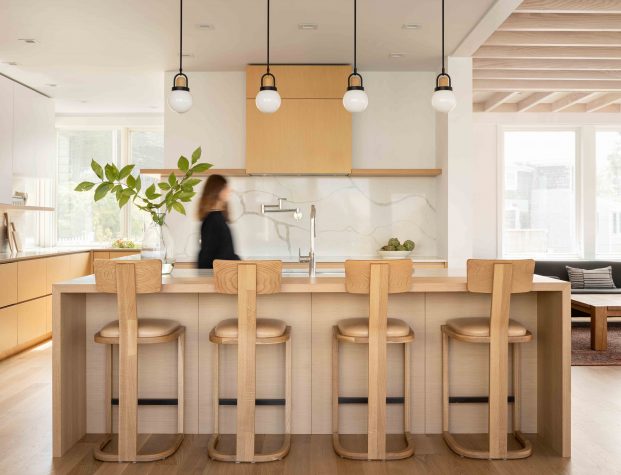 Nickey Kehoe T stools at the kitchen island add sculptural silhouettes while complementing the other woods. 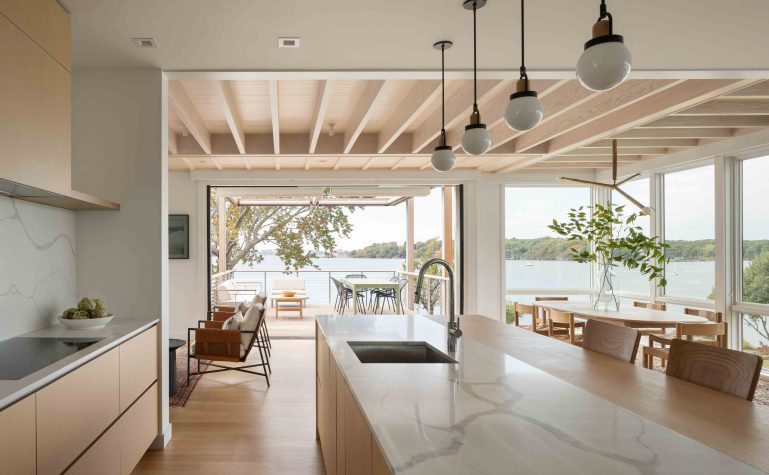 Beyond the kitchen, a pair of leather Lee Industries chairs and, over the dining table, an Apparatus chandelier. 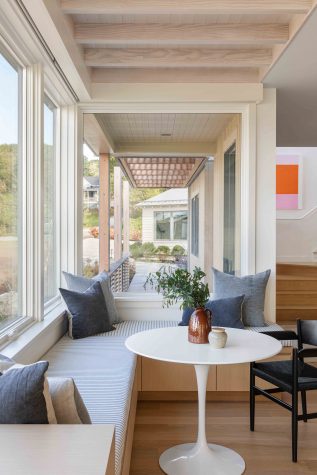 A banquette in the breakfast nook features a Saarinen table and a Mater chair.

The home’s northwest-facing side juxtaposes traditional white cedar shingles on the upper floor with more contemporary looking vertically placed red cedar siding below. The standing-seam metal roof was picked for durability as well as vernacular reference. Soren deNiord created planting beds of sandblasted concrete walls that hold back the grade. Up front they contain native plants and berries; along the side, grasses. 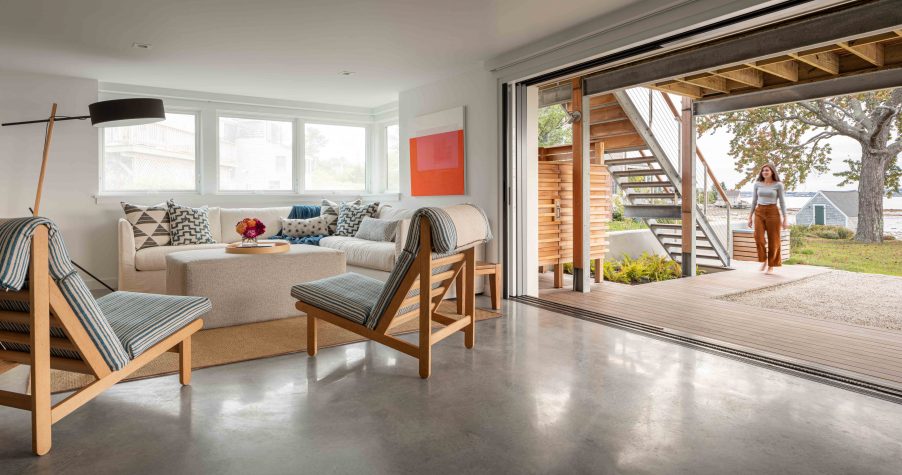 Downstairs a family room with concrete floors by S. Richer Concrete features a sectional sofa accented with pillows in fabrics by Zak and Fox and KLS Textiles, as well as 1960s Rag chairs by Danish designer Bernt Petersen. The room opens completely to the outdoors. Artwork is by Laurie Fisher.

In the owners’ bedroom, green elements have a stronger presence with various textiles from Zak and Fox, including Yamato (curtains), Postage (large pillows on bed) and Togo (bolster). The bed sits atop a Moroccan rug. 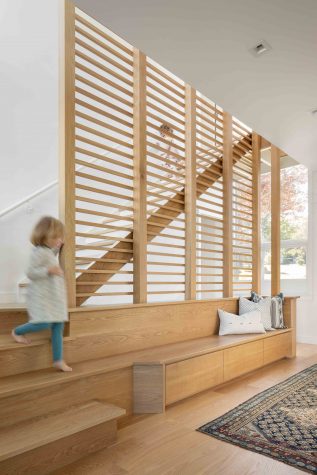 Wooden screens ascending the stair are a recurring motif, both outside and in. The home also features many built-ins with storage, such as this low bench. 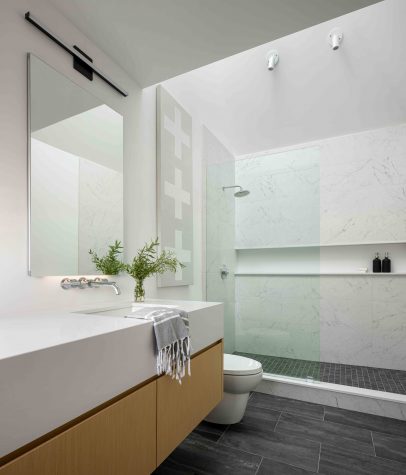 J and M installed the various tilework from Old Port Specialty Tile in this bath, where another artwork by Maine artist Laurie Fisher hangs next to the shower. Custom cabinetry designed by Whitten Architects was installed by WoodLab. 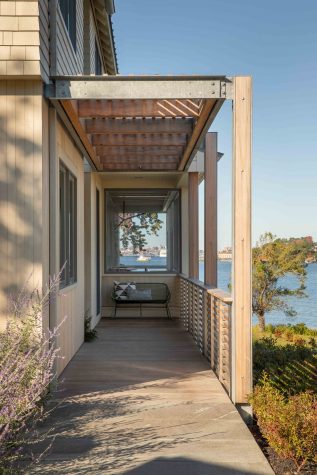 The entry path (opposite) terminates at a garden bench by Fermob. Supporting the brise-soleil canopy are steel I-beams with recesses filled by wood to soften the industrial look. 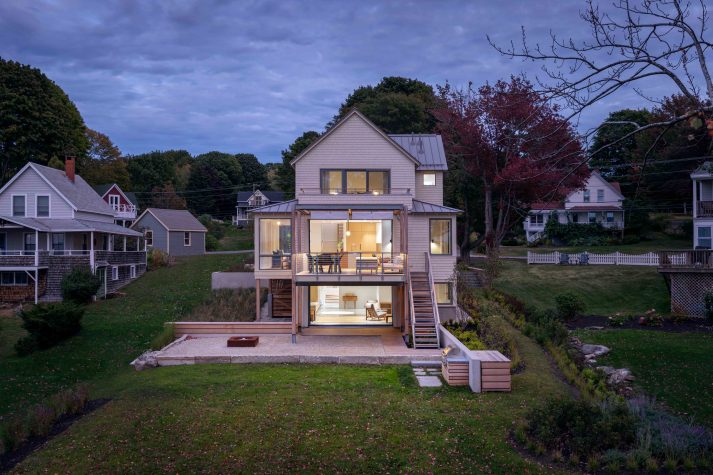 The outdoor entertaining area is an open pea gravel space with a firepit. Under the stairs is an outdoor shower and, just beyond the base of the stairs, an outdoor grill. This view displays the extensive use of glass throughout to bring in natural light. 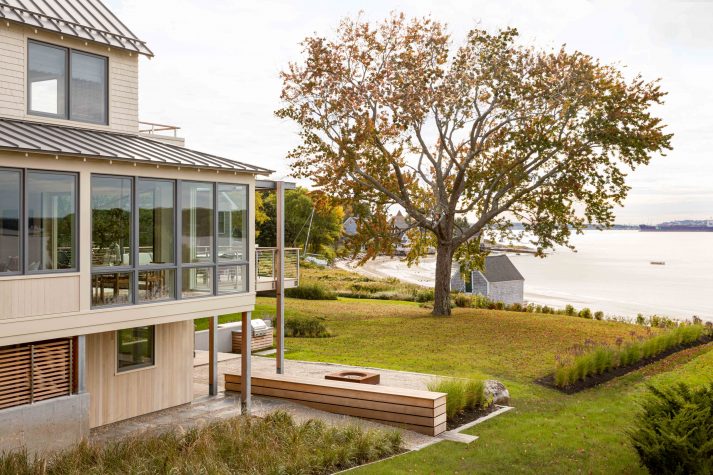 The yard sloping from house to waterfront was constantly wet because of a fissure in the bedrock that wept water. DeNiord filled the fissure with sand and brought in soil to slightly raise the grade.

The wife in the young Boston-based professional couple who owns this home was deeply steeped in the charms of the island when she and her husband bought a structurally challenged cottage on its northwestern shore in 2015. Her great-great-grandparents had built a house nearby on Pleasant Avenue in 1898, which the family now rents out in the summers. Her own parents bought another place in 1980, just a stone’s throw from the dining window nook where the couple is now sitting and looking out toward Big and Little Diamond Islands. “I can see their house from here,” she says. “Our kids can run across the lawn from our house to theirs. My brother’s house is down the road. We grew up here. Peaks has a very strong community spirit. We wanted a place for our family and kids to gather and to have exposure to the outdoors, to give them what I had as a child.”

The couple stayed in the house seasonally for a year before calling Whitten Architects to revamp the structure into something more serviceable to their needs. After determining that bringing the house up to code would be virtually impossible, they decided to start from scratch. “It had to be durable, energy-efficient, and more accessible to the outdoors than the original cottage was,” recalls principal Russ Tyson.

“We have a contemporary aesthetic,” says the husband. “In a total vacuum, if other houses weren’t here, we would have built something much more modern.” But, adds his wife, “The house had to fit in with the vernacular of the island, not disrupt the aesthetic. And it had to last for a very long time. It’s a forever home.”

Other parameters the couple conveyed to Tyson: maximizing natural light, open-plan living on the main floor, the ability to also glimpse the water from bedrooms and their home office, a substantial outdoor deck, and space for the husband’s aging parents to stay while visiting that would be easily accessible (read: minimal steps coming into the home and the main gathering areas). Additionally, says landscape designer Soren deNiord, “The clients wanted a dry site for a lawn where their kids could play. But the area between the house and the water was like a sponge. A fissure in the bedrock was weeping into the site.” DeNiord filled the fissure with sand and built what the husband calls “an industrial drainage system under the lawn.”

With the site thus dried out and stabilized, Tyson created a design that addressed the other areas of the program. Echoing the vernacular style, he created an eastern white cedar–shingled cottage with standing-seam metal roof. But he framed the porch between a path of stone pavers and the front door in steel I-beams whose cavities he filled in with wood (“The wood softens the metal,” he says) and swapped shingles on the porch wall for vertical red cedar siding. “The steel around the entryway announces that you’re entering a more modern interior,” Tyson says. There is essentially no change in grade from street to front door, and the porch faces the next-door home’s porch across the lane between them that leads to the waterfront. The fact that inhabitants of both homes can exchange niceties from their respective porches, “feels very neighborly,” adds Tyson. Inside is an open-plan main floor, with a kitchen on the left just past the entry hall and stairwell and a dining nook across from that. Beyond them lies the living room and, past glass sliders, an expansive deck.

Maximizing natural light was not an easy lift. “Northwest is the worst direction to face because the sun is in the south,” Tyson explains. “So we made the house a maximum of two rooms deep and put lots of window on the south side. The stairwell also slices through the middle of the house and has large windows that bring in light from both the south and northwest.”

The stairs lead down to a guest area and game room that opens to a graveled outdoor entertaining area with a firepit and outdoor grill. Upstairs are family bedrooms and baths. To furnish and accessorize the home, the couple called upon Heidi Lachapelle and Katie Judkins of Heidi Lachapelle Interiors. “They were a working young couple with a family, just like Heidi’s situation and mine,” says Judkins, “so we identified with their need for an easily livable home.”

The designers used light wood furnishings throughout, balancing custom and designer pieces with some midcentury furnishings. “The direction of using a lot of light white oak came through the cabinetry that Whitten designed,” says Lachapelle. “We wanted to keep everything harmonious and not detract from the architecture.”

In fact, adds Tyson, “The idea was that no discipline be more important than the other, which is reflective of the light and the environment we were in. If the interior were dark, you would really feel the transition from interior to exterior. This way the brightness of the outside moves easily inside.”

The wife also happens to be an executive for Wayfair, the popular home furnishings catalog. “Design has always been a personal hobby I’ve been interested in, but I had no professional training,” she says. Lachapelle and Judkins steered her and her husband to a mostly neutral palette of greens, grays, beiges, and blues that reflect the landscape, much of it expressed through Zak and Fox fabrics (“a nice balance between modern and traditional,” says Lachapelle). Some heavy-hitting Scandinavian pieces elevate the casual aesthetic: an Arne Norell chair in the owners’ bedroom, a pair of Bruno Mathsson Eva armchairs in the living room, a Bernt Petersen Rag lounge chair downstairs. Additionally, Lachapelle and Judkins helped the couple select a collection of art by Maine artists, including Laurie Fisher, Jenny Prinn, and Louis-Pierre Lachapelle (Heidi’s husband).

Outside, deNiord’s plantings blend a hybrid cottage–modern aesthetic. After ripping out a lot of invasive species, he used sandblasted concrete walls to hold the grade along the entry side, filling them in with native plant material such as blueberry, nepeta, hydrangea, and a serviceberry tree. Elsewhere, beachy grasses prevail and create soft borders that add some basic structure. (The husband’s mother, by chance, was a landscape designer and approved heartily of deNiord’s scheme.)

In an interesting way, the design team’s modern twist on the cottage aesthetic arguably achieves an even more intimate connection to the landscape than the older surrounding cottages, which, as was the fashion during the eras in which they were built, are far less open to nature and the elements. Though its lines and materials feel modern, the ample use of windows and glass sliders, the light woods, and the porousness between indoors and outdoors create a home that makes you feel you’re perpetually al fresco. More important, says the wife, “Every time we come to this house, we’re so happy to be here.” 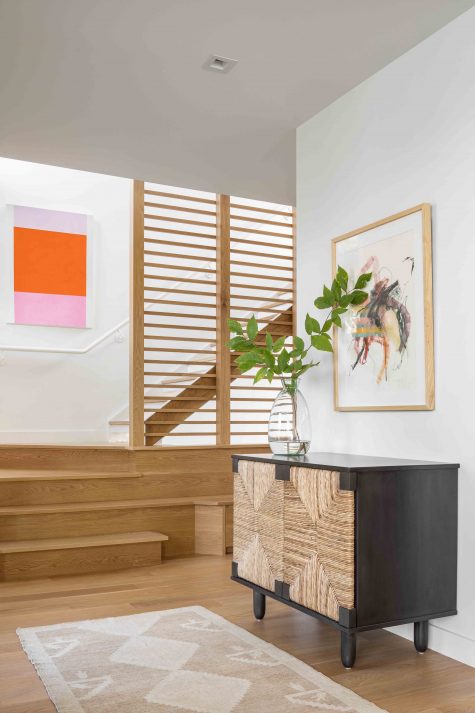 In the entry hall another Fisher piece hangs near a painting by Louis-Pierre Lachapelle suspended above a sideboard from Noir. 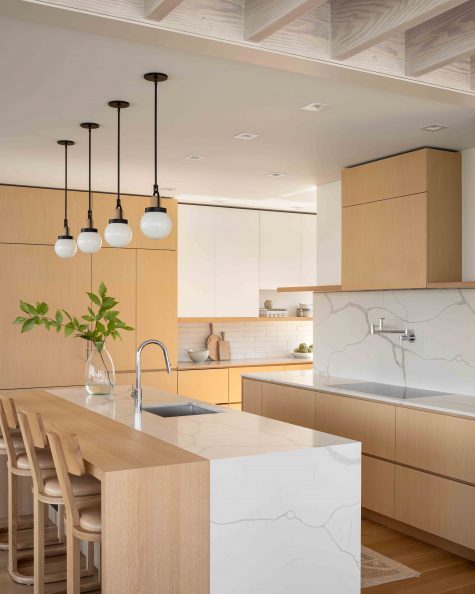 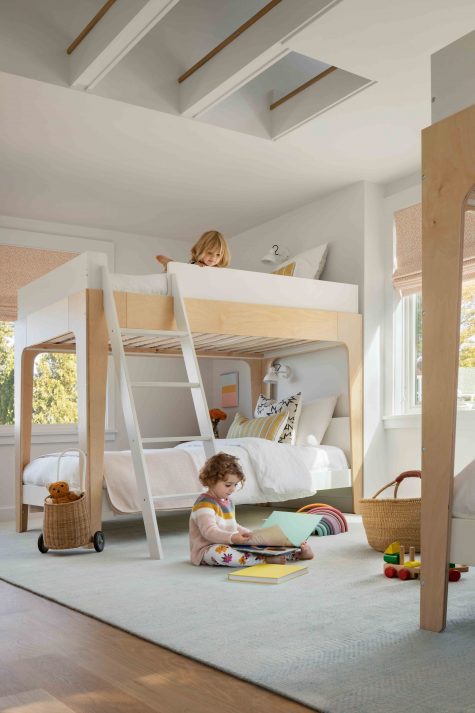