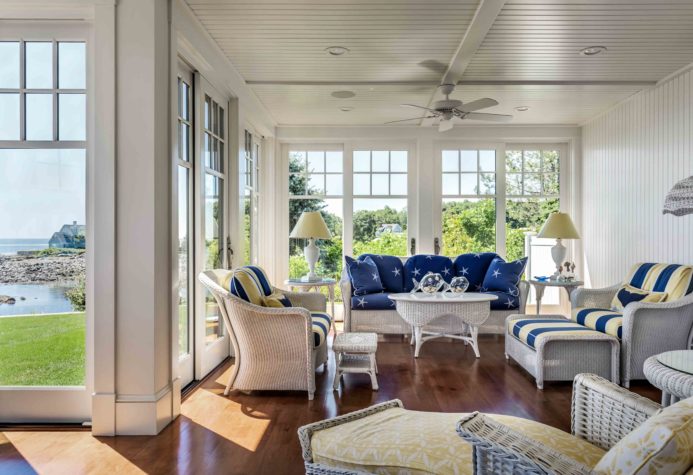 The sunroom provides a second dining and living room space. The French window panels open to create a porch in the summer, while in-floor heating keeps the space toasty in winter. 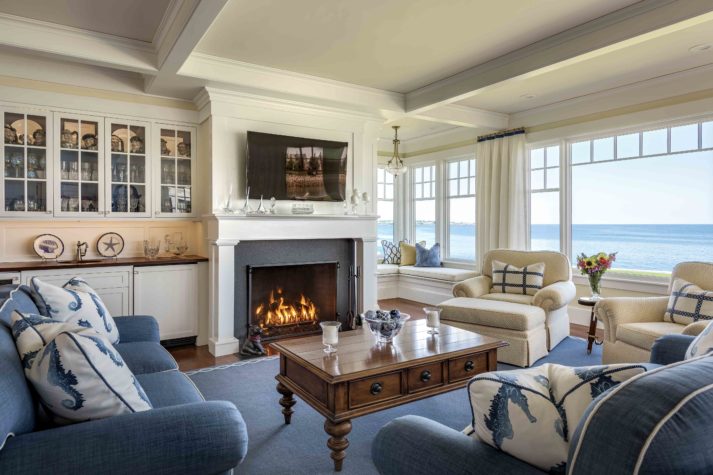 The living room features a fireplace that has an indigenous stone surround and a black slate hearth; a built-in bench that serves as reading nook; and a wet bar that also functions as a display area for collectibles. 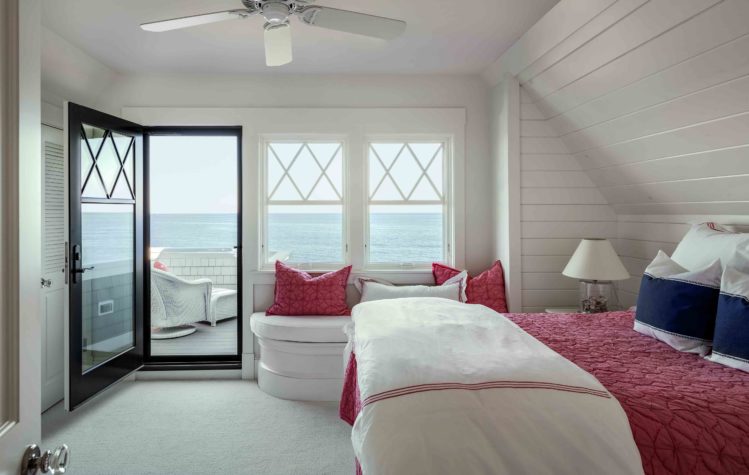 There is a partial second floor with three rooms over the garage. One of the bedrooms with a curved, built-in bench and balcony introduces coral to the home’s palette with Serena and Lily bedding. The second bedroom has bold navy and white-stripe bedding. The third room holds exercise equipment. When not in use, the second floor can be closed off entirely. 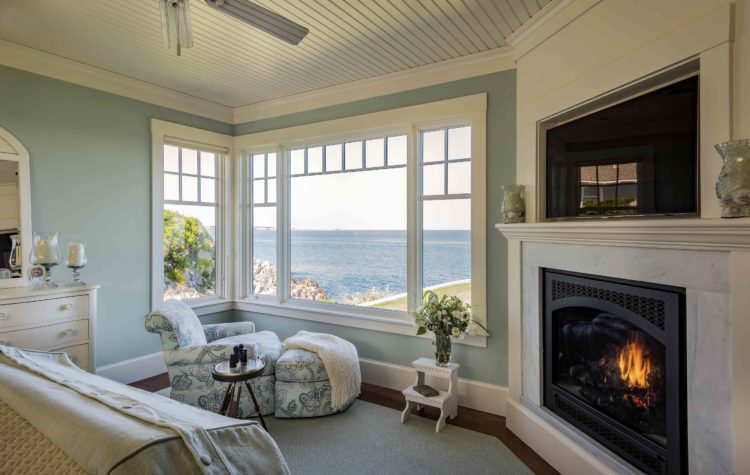 The house sits on a half-acre lot facing the sea with neighbors on all sides. The fireplace wall preserves privacy in one direction, while windows access the view in another. 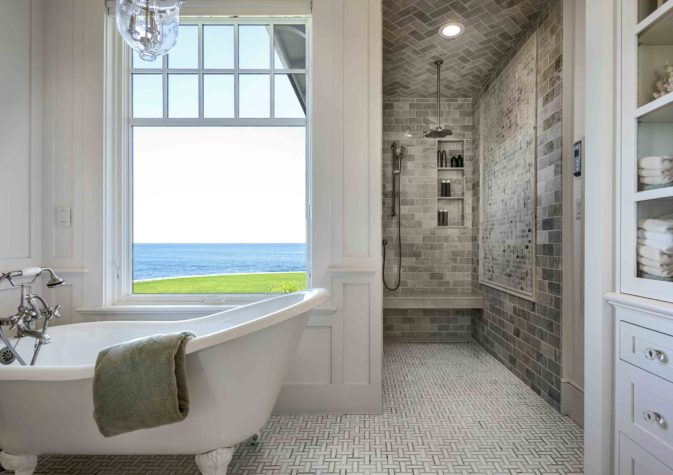 The owners’ bedroom’s shower forms a small room with its own window through which one can peer out at the ocean. A belljar pendant lamp etched with compass roses hangs above the soaking tub. The floor is a basket weave of Ming green and Thassos white marble, while the shower walls have a green marble subway tile with an embedded marble mosaic. 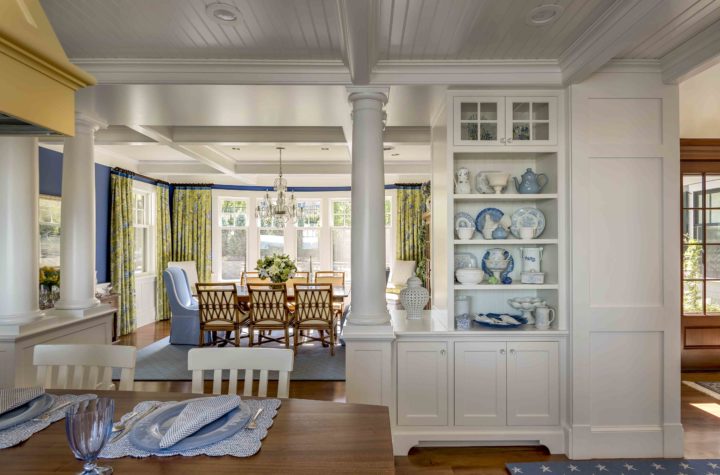 A view from the kitchen to the dining room shows more of the display-and-storage space that is abundant in the house. The house’s blue-and-white palette gets some variation with the addition of yellow for this space. The engineered wood floor is a tinted reddish-brown white oak, intended to suggest mahogany. Focal Point Landscaping planted pine trees outside of the dining room window. 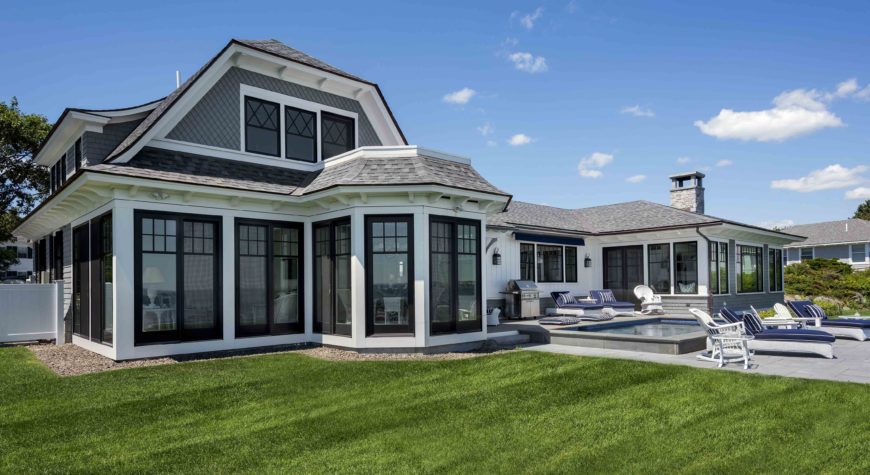 The house’s exterior is a gray, predipped white cedar shingle, chosen to give the home a cottage feel. Builder Glenn Farrell notes that the V-match soffit and knee braces “are part of what makes the house look older,” even as the crisp white trim around the black Marvin windows make the house feel fresh. The outdoor furniture is from Lloyd Flanders and is covered with a custom navy Sunbrella fabric. The mullion pattern on the upper windows is repeated on some of the interior glass cabinetry. 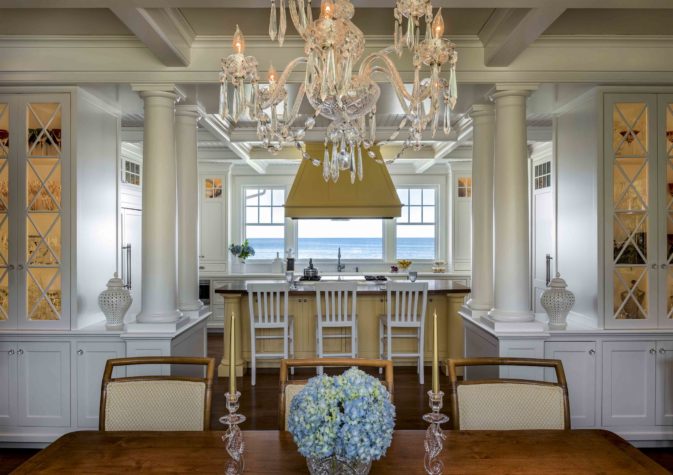 A view from the dining room into the kitchen reveals elaborate trim work and a yellow, mahogany-topped kitchen island with a stove hood. A Waterford crystal chandelier that was a birthday gift from the homeowner’s late husband hangs over the dining room table. The white lattice ginger jars by the columns are just one of the many items that the homeowner collects. 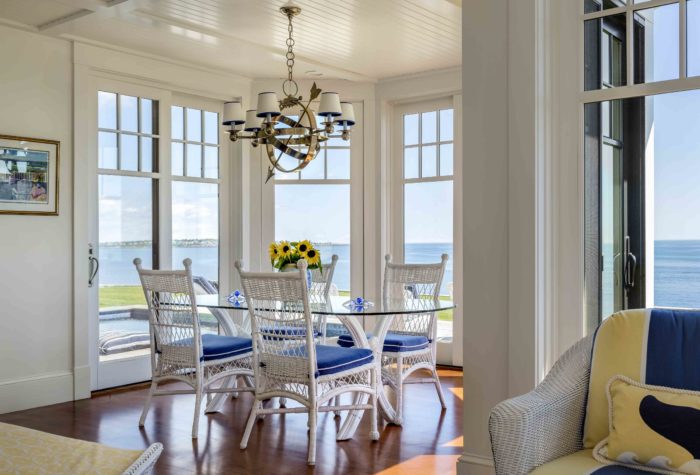 The sunroom’s dining room has coffers and a beadboard ceiling that are part of a decorative refrain repeated throughout the house. The chandelier is a polished-nickel armillary sphere surrounded by lamp shades. 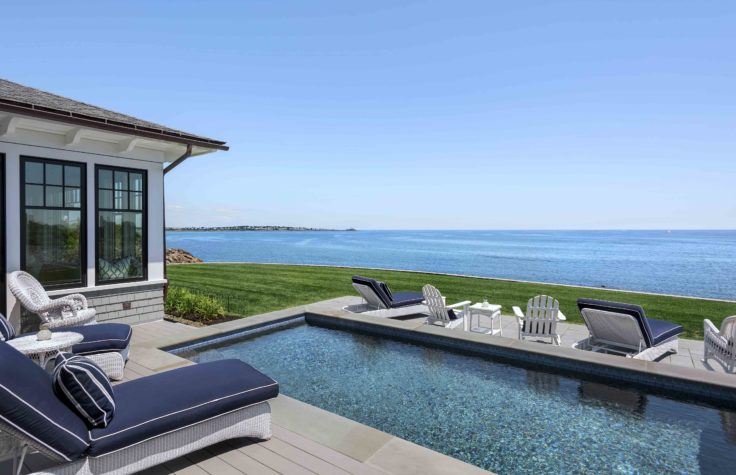 A view of Cape Neddick’s Nubble Lighthouse from an ironwood deck with a bluestone terrace and pool.

Who doesn’t want to know which doctors other doctors see for care? Or which lawyers other lawyers consult? Who do the experts choose, when the experts are the customers? And what do they prefer when style, not just quality and budget, is part of the decision? I wondered what home a particular longtime York realtor would pick when she decided to downsize, given she knew her region so well. The big surprise was that, after a lengthy search, she picked a home not to live in but to (more or less) knock down.

Why not just buy an empty lot? I wondered.

Because, as her architect, Scott Fiorentino of Fiorentino Group Architects in Portsmouth, New Hampshire, observes, there are no empty lots on the ocean. The realtor wanted to create her own home from the ground up, and this was the best way to do it.

The good news about this property, from this realtor’s point of view, was that the existing house would allow her to build on the most scenic part of its lot. Given current setback rules, if the lot had been empty, she would have had to site the house farther back on her half acre. Instead, Fiorentino was able to produce a design that allows the homeowner views of the open ocean and Nubble Lighthouse from virtually every room. There wasn’t any corresponding bad news, but there was a puzzle: How would she fit all she wanted on the available lot? A minor expansion for a dining room was allowable, and some house volume could be added over the garage. In all other ways, the footprint had to be adhered to.

Before she moved in, the realtor was living in a sizable house in Cape Neddick. Her husband had passed away, and her two children had grown, which was part of why she wanted a smaller place. However, she did not want to abandon much of what she valued about her house, which was just about everything: a blue, yellow, and white palette; nautical decorative details; an in-ground pool; Stark carpets; the furnishings; and treasured possessions, including her collections of Waterford crystal, Simon Pearce glass Christmas trees, ginger jars, and white Belleek porcelain inherited from her mother. Although the homemaker’s tastes tend to the formal, she wanted her two grandchildren to feel comfortable running from room to room when they visit. She also wanted a few things she hadn’t had before—like single-floor living and features (including no door thresholds) to facilitate aging in place.

To meet these desires, Fiorentino and interior designer Sarah Duquette of Duquette and Company in Kennebunk aimed to create a refined house with five major rooms downstairs: an en suite owners’ bedroom, a living room with panoramic views of the ocean, a kitchen with a buttercream yellow island as its focal point, a formal dining room, and an enclosed summer room surrounded by six-foot French doors. The homeowner would largely live in these rooms, but there would also be a partial second floor with two bedrooms and an exercise room for company.

Tom Howarth of Howarth Builders in South Berwick built the shell of the house, then Glenn Farrell of YFI Custom Homes in Cape Neddick took over, finishing the project and attending to the detailing. All of the cabinetry, built-ins, and vanities were built by YFI’s sister company, YFI Millworks. The interior has a solidity and stability that one might associate with the Old World, an effect enhanced by elaborate trim work—cornices, coffer ceilings, paneling, interior arches, and Tuscan columns—but offset by light walls and the bright colors of the upholstery and pillows, which lend a more relaxed feel to the whole interior.

Fiorentino explains that what makes the substantial trim work successful has to do with the decorative refrains that are established on entry and then continued through the design. A paneled archway with built-in glass cabinetry separates the foyer from the living room. A similar but more elaborate archway (with half-columns and additional cabinetry) divides the kitchen and dining room. There is a simpler arch over the owners’ bathroom’s sink. The living room ceiling has a shadow line, cornice, and coffer—a profile that is used in the kitchen as well. In the living room, a subtle off-white ceiling paint allows the white coffers to register. In the kitchen, beadboard runs between the coffers. Interior transom windows and the glass on upper cabinets match the squares of the six-over-one exterior windows on the ground floor. Some of the glass cabinets and the upstairs exterior windows have a diamond pattern that echoes the diamond shingles under the gable roof. (Fiorentino says that the diamond pattern is something one sees on the second floor of coastal homes from the nineteenth century; he theorizes that, besides style preference, it may have something to do with the historic need for smaller pieces of glass at the higher elevations to withstand wind gusts.)

Interior designer Sarah Duquette of Duquette Designs similarly builds and varies refrains, using the homeowner’s favorite blue, white, and yellow palette in different combinations throughout the house. In the living room, blue and white or yellow and white fabrics cover sofas and chairs that Duquette reupholstered and then piled with pillows in an array of fabrics, including one depicting seahorses. In the dining room, which has a French country dining table and a Waterford crystal chandelier (a birthday gift from the homeowner’s late husband), the curtain panels incorporate some green for variety. The sunroom is largely yellow and blue. The painted wicker furniture (including two antique chaises inherited by the homeowner from her aunt), tongue-and-groove ceiling, and walls provide white accents. Every other window in this room can be removed to make a screened porch, but in-floor radiant heat makes it a year-round room as well. A soothing sea mist color was used for the owners’ bedroom’s linens, and the room was painted with the identical Palladian Blue paint by Benjamin Moore that the homeowner had used for her bedroom in her previous house.

Special spots in the house include two built-in living room benches that allow one to cozy up with a book and feel surrounded by the ocean and a mahogany-topped builtin bar in the living room, which has a sink and wine refrigerator but also serves as an additional display area. The grandchildren have a particular fondness for the television that can rise from the kitchen counter at the touch of a button. They also love the separate area where their toys are, but their favorite space is the owners’ bathroom. It has a shower that forms a small room with its own window, through which one can peer out at the ocean. A soaking tub sits just under another window and can be illuminated by a bell-jar pendant lamp etched with compass roses. The floor here is a basketweave of Ming green and Thassos white marble, while the shower walls have a green marble subway tile with an embedded marble mosaic.

Fiorentino says that part of the strength of the project came from the “unity” of the homeowner’s vision. Despite the many items she owns, her taste is very particular. This, too, can be seen in her custom closet with its shoe racks, purse cubbies, and clothes racks (which have pull-down bars so higher rods can be lowered). There’s abundance here but focus as well. (She is clearly a lover of basic black with bright colors.) The first thing Fiorentino told me about the homeowner was that she is always immaculately turned out. The same might be said about her house. On the day I visit, it’s put together, sophisticated, vibrant, and full of beautiful arrangements of fresh flowers, as if the house, like its owner, takes every day as a good reason to dress up. 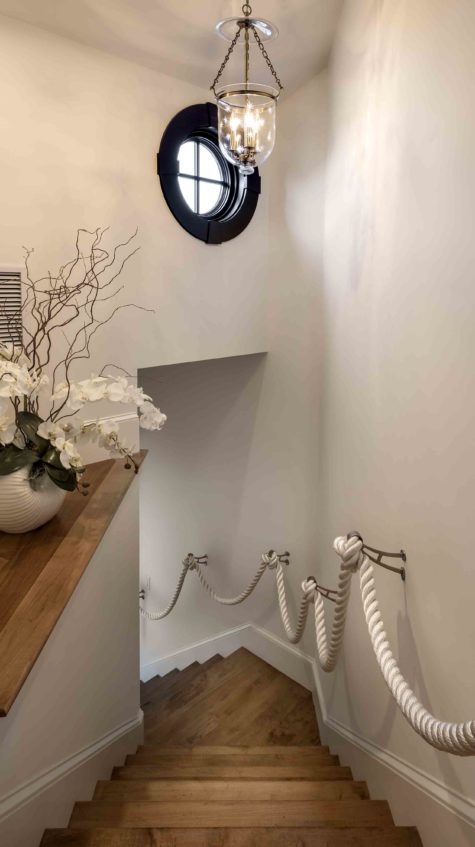 The house is full of nods to its location with a rope handrail to the second floor, and a port hole window painted blue. 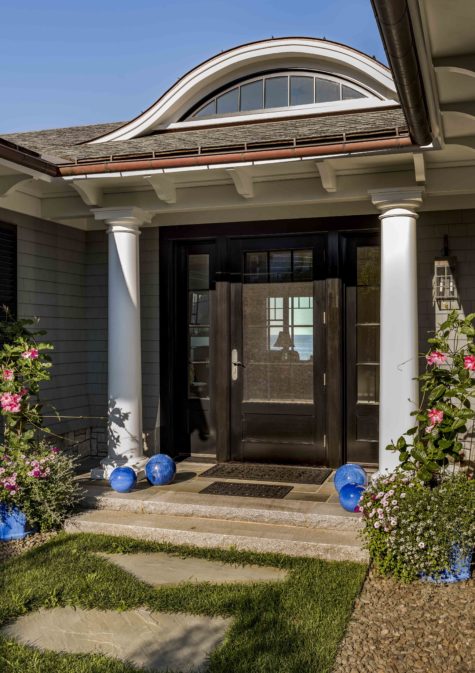 Columns at a recessed doorway introduce the extensive trim work that is inside, while an eyebrow window lets additional light into the front entry. Landscaping is by Rosemary Whitney of Focal Point Landscaping. Whitney used the blues, yellows, and whites that the homeowner favors for the general landscape, though pinks and whites frame the door.