An Element of Grandness 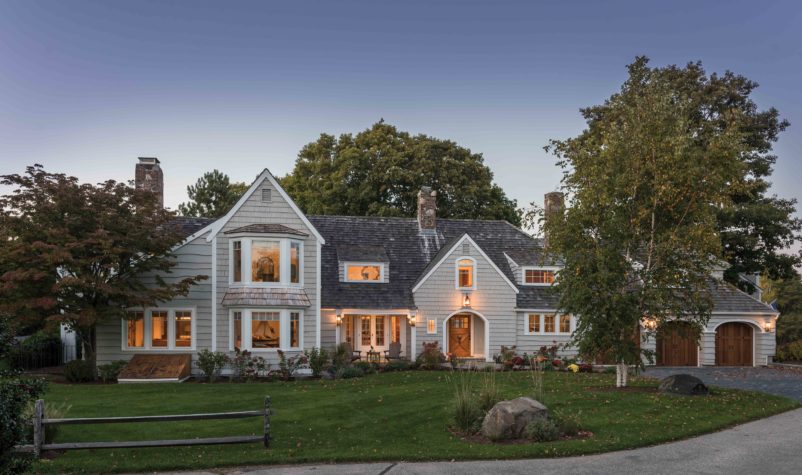 Once called the Pink House for its exterior and interior hues, this 1928 home has been added on to multiple times through the years. In its most recent incarnation, and to make the house consistent with the neighborhood aesthetic, Louise Hurlbutt of Hurlbutt Designs suggested a seacoast gray lightened with white trim for the exterior. Kevin Allen of Ambidextrous is responsible for the landscaping, which includes a new bluestone floor and fire pit at the back of the house. 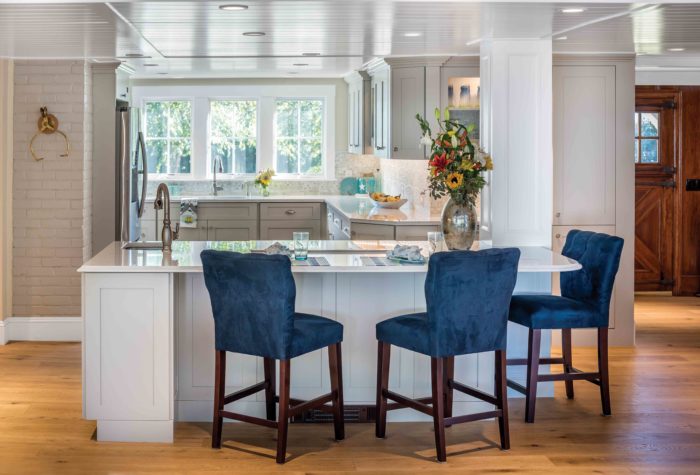 A thoroughly redesigned kitchen by Nancy Bither of Atlantic Design Center shows blue velvet chairs around a quartz kitchen island, gray Cabico cabinets with a recessed panel and bead frame, Top Knob hardware, and Lunada Bay glass tiles in a wave pattern for the backsplash. Nickel-gap was used for the ceiling. The light gray brick wall at the left was once a tea rose color. A nearby powder room was converted into a pantry for extra storage. 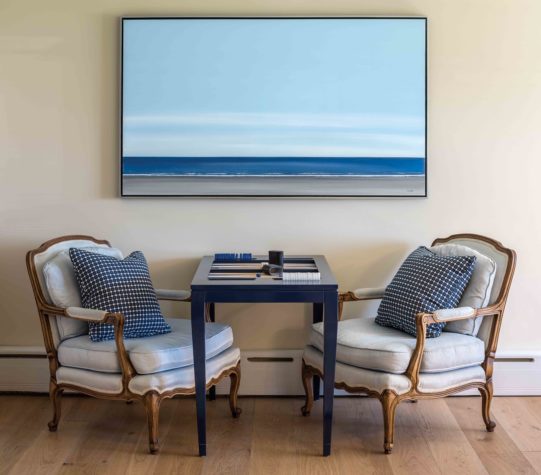 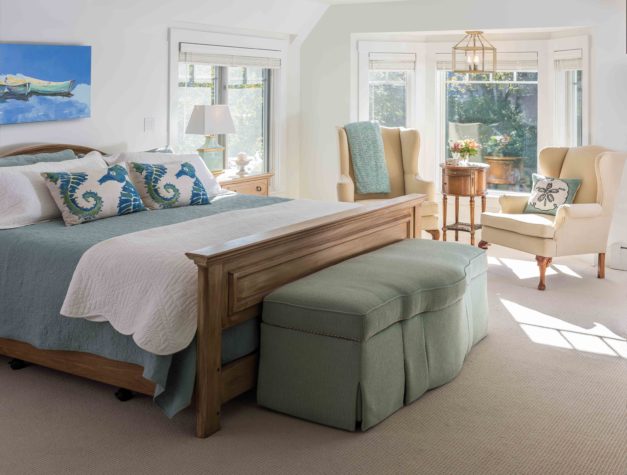 The owners’ bedroom was once open to the downstairs living room. Now closed off, the bedroom makes use of the previous owners’ furniture (including reupholstered wingback chairs in a soft beige fabric). The homeowners found the painting of boats and the light fixture in the bay window. Bonnie Weeman of Hurlbutt Designs installed the wood blinds and selected the wall color. 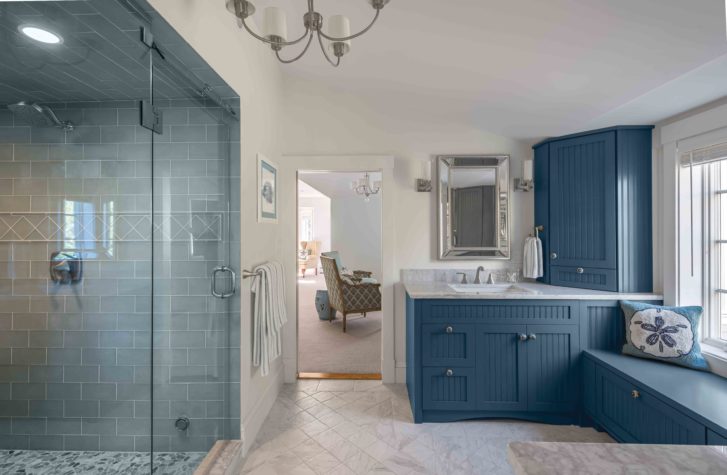 Because contiguous his-and-hers sinks would not fit in the owners’ bathroom, the cabinetry was designed in a wraparound U. The beadboard cabinetry is painted in a custom teal and incorporates a built-in seat and marble countertops. The bathroom also includes an oversized steam shower. 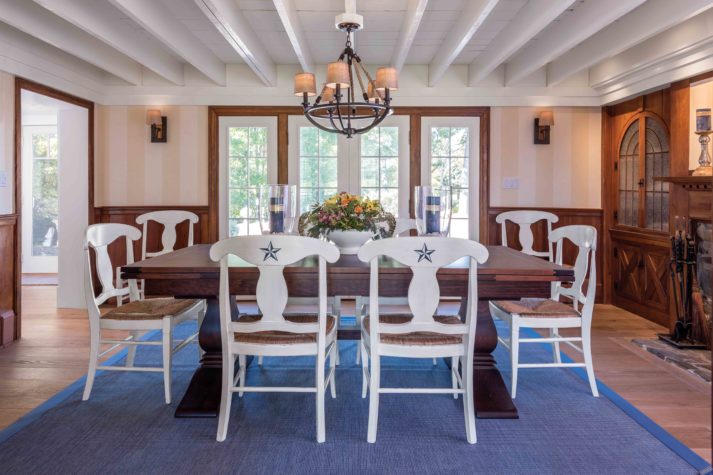 To give the low formal dining room ceiling some height, the floor joists were exposed and painted white. The original built-ins were preserved, but the space was lightened with Antique White Benjamin Moore paint on the woodwork and beige striped wallpaper by Thibault. Hurlbutt Designs added chairs hand painted with blue stars to a custom extension table with a medium cherry stain and accented it with glass hurricanes and blue candles. The Kona chambray rug has slate blue binding. 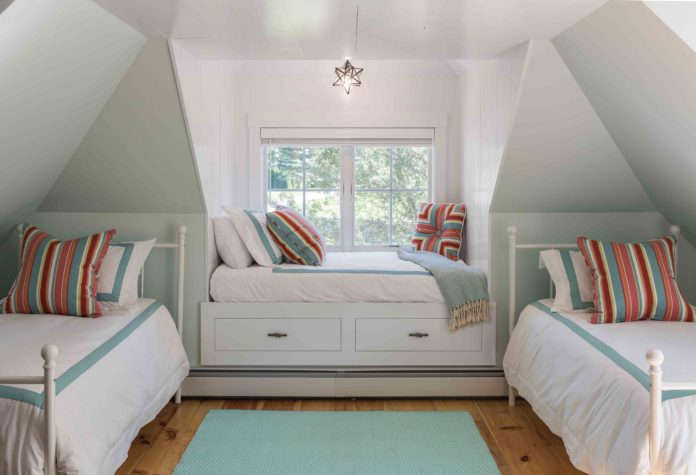 A guest room received a new shed dormer for egress purposes. The built-in by the window, and the two iron beds have Serena and Lilly bedding and custom pillows by Hurlbutt Designs. The rug is Dash and Albert. The star light is from Pottery Barn. The original house had pine on all the floors, walls, and ceilings, and there is still pine under the drywall in this room. 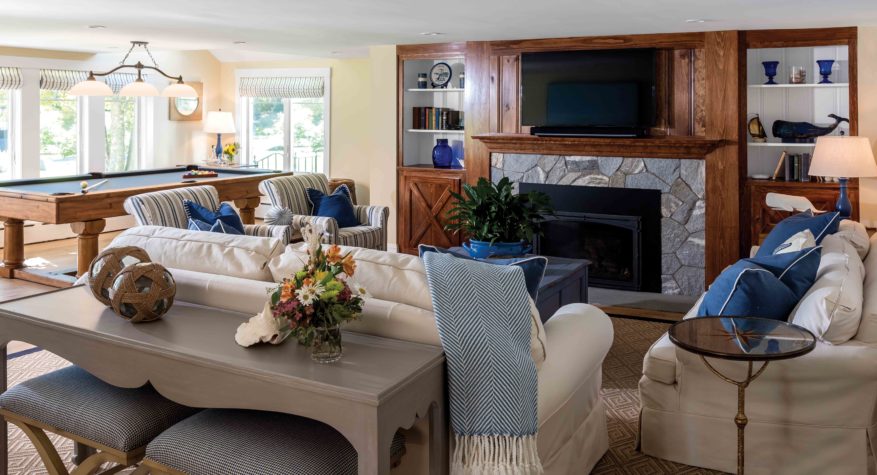 Slipcovers were made for the existing sofas in the living room and the decorative pillows are from Hurlbutt Designs. A Curacao dune carpet with a diamond pattern and navy twill binding softens the space. Crystal Wilson of Douston Construction designed the living room fireplace wall to mimic the original fireplace wall in the formal dining room.

A Canadian couple revive a historic home in Kennebunk

Joanna Bennett and Brian Grassby were debating between two houses in Kennebunk: one that didn’t exist and one that did. Architect Brian Beaudette had designed the house that didn’t yet exist, and Crystal Wilson and Shawn Douston at Douston Construction had priced out the building costs. Even so, Beaudette and Wilson were rooting for the house that did exist—the “Pink House,” nicknamed for the pink of its interior furnishings and the pinky-brown paint and rosy trim of its exterior.

When Bennett and Grassby first visited it, the Pink House had been on the market for some time. It most likely was remaining unsold due to low ceilings and a somewhat confusing layout, a result of multiple additions to the house, which was first built in 1928. Grassby’s initial thought on purchasing it: “Not a chance.” Aspects of the house seemed odd to him. There were four discrete sitting areas, for example, and part of the living room had a cathedral ceiling that opened to the owners’ bedroom upstairs, hardly conducive to privacy. And yet the empty lot that Beaudette had designed a new house for had a difficult grade. Even though the lot was adjacent to the Pink House—both properties are located between Webhannet Golf Club and Mother’s Beach—it did not have the same good views. “Where are we going to play football?” Grassby wondered about the steep lot.

In the end, Bennett found she couldn’t get the Pink House out of her head. It had the kind of charm and character that you can’t easily create anew. She admired things like the dining room’s stone fireplace, the beautiful wood built-ins, and the glass-paned wood closet doors throughout the house. Even the entry was unusual. It had a lion’s-head knocker on a Dutch door that opened into a wood-paneled foyer. There, an arch framed by a double row of glass panes led into the dining room. A tiny telephone room, with the original wood bench and shelf, was off the foyer, as was a wooden liquor closet. Bennett had a vision for what the place could be. There was “an element of grandness to the house,” says Beaudette. Wilson adds, “Brian and I were definitely proponents of preserving it.”

There was a lot to do to lighten up, modernize, and reconfigure the house, however, and Bennett, Wilson, and Beaudette actively collaborated on design decisions that Douston then executed. Spaces were gutted, and the overall floor plan was simplified, though it still remains unusual. Now, the center of the first floor is a sunny great room with a white and neutral palette accented with aquas and navys. The kitchen was completely redone with gray bead-frame cabinets, wavepattern sparkly glass backsplash tile, a white nickel-gap ceiling, and a quartz-topped kitchen island surrounded by upholstered royal-blue velvet stools. Nancy Bither at Atlantic Design Center designed both kitchen and bathroom, while Hurlbutt Designs assisted with tile and other selections. A second living room and the formal dining room retain more of their old-world feel. The formal dining room had an existing fireplace wall with wood shelving and cabinetry, and Douston Construction built a similar fireplace wall for the living room. To add height to the formal dining room, the ceiling was removed, leaving the upstairs floor joists exposed. These joists were painted linen white, and the walls were covered in new striped wallpaper. The living room’s cathedral ceiling was closed off from the owners’ bedroom. In what was once a sitting room by the living room, an en suite bedroom was added.

Shawn Douston, the owners, and others had heard that the house’s original owner had run a sawmill, and the house’s abundant use of wood gives credence to the rumor. The house is clad in live-edge boards and roofed in wood shingles. Originally, the entire interior— floors, walls, and even ceiling—was wood. Much had been covered over with drywall over the years and could not safely be reexposed, but Douston did reveal and restore some wood, including the 12-inch-wide pine boards with beautiful patina that he found under the upstairs carpet.

Beaudette redesigned the upstairs owners’ bedroom so it now consists of two sitting areas, a small office area, and a closet. Bennett and Grassby wanted to keep an existing whirlpool-tub room but also had an entirely new owners’ bath added. Elsewhere in the house, the bathrooms have white cabinetry with wall colors dictated by the light yellows, greens, and blues of the marble used as an accent in the floor and shower tile. For the owners’ bath, Bennett and Grassby went with a bolder teal custom paint for the beadboard cabinets and a built-in bench. The large steam shower has glass tiles, a marble-topped seat, and pebble-tile flooring.

Bennett and Grassby had bought the Pink House furnished. They kept many pieces, including a sleigh bed, wicker furniture, cabinets, sofas, and chairs; they discarded some colonial pieces that were not quite the look they wanted; and they refreshed still other wood pieces with chalk paint. Although Bennett did a great deal of the interior design herself, including selecting lighting and some of the bedding, she and Grassby turned to Bonnie Weeman of Hurlbutt Designs to, as Weeman says, “transform the interior without doing a whole house full of new furniture.” This involved coordinating many aspects of the rooms—slipcovering and upholstering the furniture, selecting paint colors, providing custom-made cushions for built-in benches and other seating, and purchasing new rugs and bedding. New pieces were also added to complement the existing design. Weeman made white sheers for the interior side of the many French doors, a particularly lovely feature against the dark wood frames. Taken as a whole, the rooms have a light, beachy feel from materials like sisal in living room rugs and two staircase runners, rope on a mirror and a chandelier, and glass fishing bobbers on a console table. One powder room has fish-pattern wallpaper. Pillow fabric features seahorses and fish. New starfish pulls adorn old closet doors painted white.

The renovated house has six bedrooms, a few with their own sinks, since that is how Bennett and Grassby found the rooms. Each room is distinguished by its bedding—one room is white and red with lobster pillows; another is aqua and coral and has a built-in daybed in a new window alcove. Still another is light blue with pillows in varying shades of blue. This latter room had once been the owners’ bedroom closet: when Douston went in under the drywall to frame out a new door, he found there was a door there already. So likely the “new” bedroom was actually an old bedroom that had been turned into a closet and was now being turned back into a bedroom.

Bennett first started coming to the Kennebunks as a child. She is from Montreal and says Maine is “a huge destination for Montrealers, because it has the closest beach.” When Bennett married, she introduced her husband to the state, and their now-grown children are also fans. No matter where in the world they are living—Bennett and Grassby currently reside in Alberta, Canada—they and their family members always congregate in Maine.

For 60 summers in a row, Bennett’s father swam at Mother’s or neighboring Gooch’s Beach. His last swim was in 2016, a year before he died at age 88, and two years after Bennett and Grassby bought their house. In addition to the pleasure of gathering the family they created and the families they came from, Bennett and Grassby have the additional pleasure of knowing Bennett’s father got to see the house. “He said many times how he couldn’t believe we had this place,” says Bennett. For all the previous decades of visiting, the generations had always rented. “We are so happy he was part of it for a little while.” 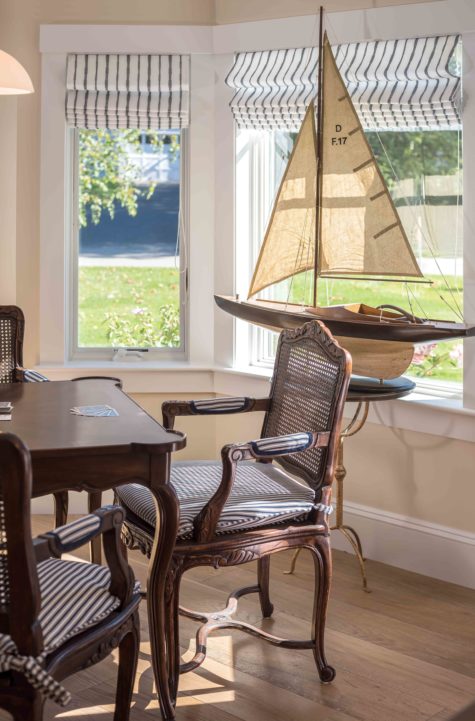 New Roman shades made of a white sheer with navy embroidery and white lining are the perfect touch for this nautical-themed room with a model sailboat. The four cane-back chairs at the game table were upholstered by Hurlbutt Designs with indigo ticking. 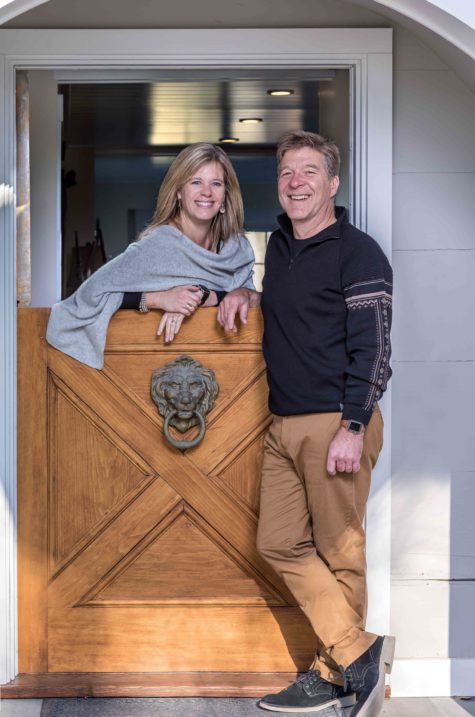 Homeowners Joanna Bennett and Brian Grassby stand at the front door, once hidden inside a narrow alcove with an applied exterior trellis. The trellis was removed to showcase the original Dutch door with lion’s-head brass knocker. 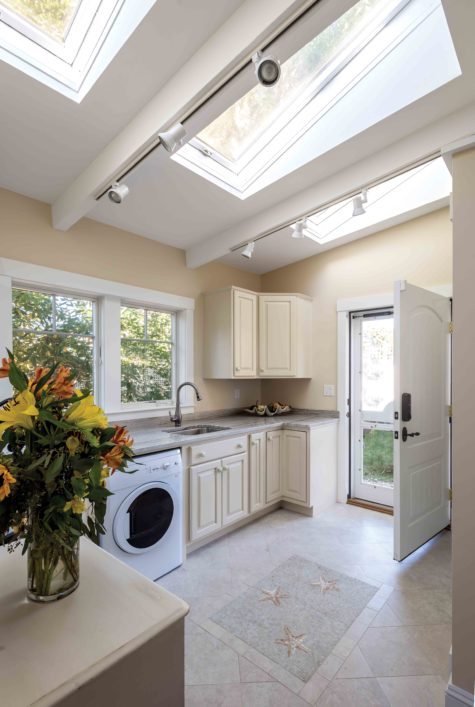 A new laundry room intended for beach towels, has a starfish mosaic incorporated into the floor tile.