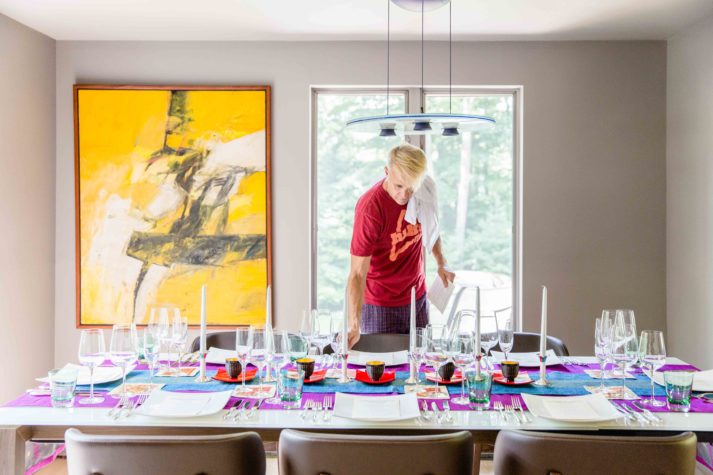 Clark Frasier adds final touches to the perfectly eclectic table setting before the dinner party he is hosting with his partner, Mark Gaier. The table runners are from Thailand and Denmark, and the glassware originates from Florence, Myanmar, and Saigon. 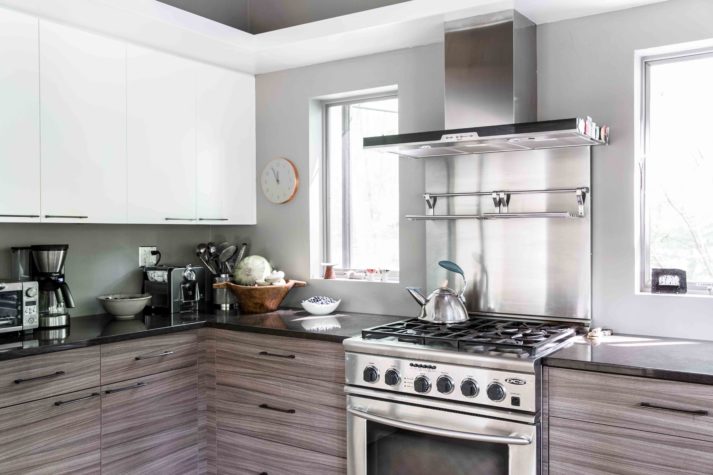 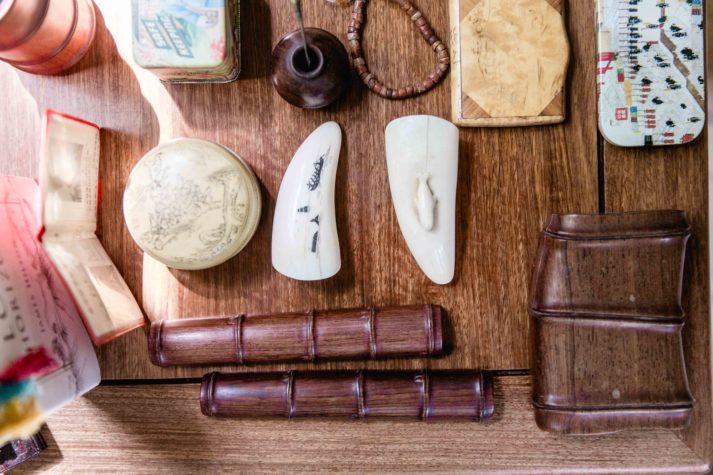 Frasier and Gaier have collected many interesting items from their travels around the world. 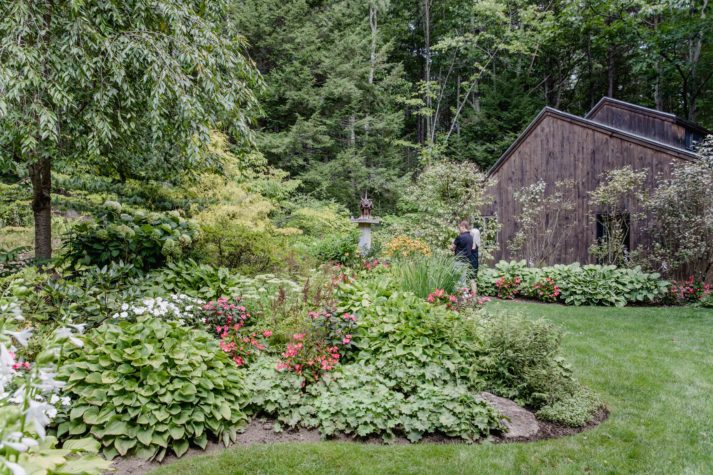 Guests explore the lush garden at Frasier and Gaier’s home in Cape Neddick. 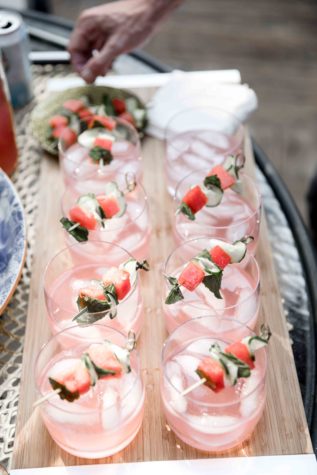 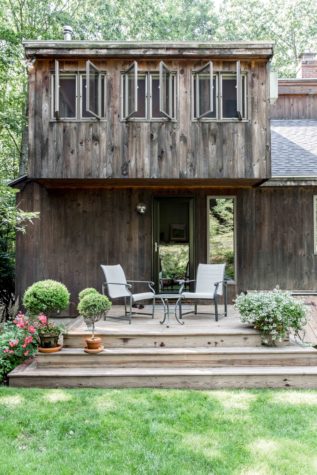 Pieces from Frasier and Gaier’s extensive art collection line their stairway. The wood covering the stair wall dates back to the 1770s. It was taken from the couple’s former restaurant, Arrows, and is a conversation piece for their living room. 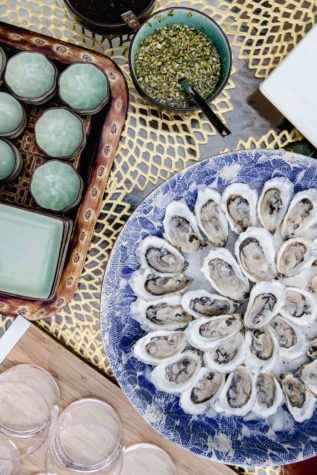 A plate of Pemaquid oysters is the first course of many at Frasier and Gaier's dinner party. 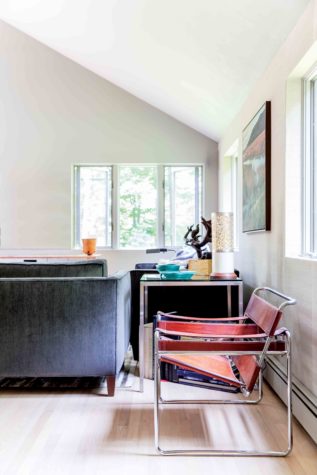 This cognac-colored Wassily chair by Marcel Breuer is functional art in Frasier and Gaier’s home.

According to Clark Frasier, a successful dinner party has several elements: good food, good people, and good ambiance. The chef and his partner, fellow restaurateur Mark Gaier, have internalized this formula (and of course, given their backgrounds, the good food part is never an issue). Although the assembly of the satay skewers and the preparation of complexly layered sauces began days ago, my experience of their dinner party starts the moment I glimpse the dining table. It is dressed up with two table runners—one is a brilliant fuchsia cloth from Thailand, the other a soft blue linen piece from Denmark. Silver candlesticks rise from the orderly tablescape, and dishes from Japan, Thailand, Vietnam, and Italy sit waiting for the guests to take their seats and begin the feast.

The table setting, it turns out, is a characteristic element of the couples’ entertaining philosophy. “If you’re going to go bold,” Frasier says, “go bold.” He adds, “It’s not something people do that much anymore, but if you want your meal to be festive, it’s worth going over the top.” Table settings, he explains, set the tone for the evening. “As soon as your guests see the place you’ve set for them, they begin to wonder: What will we eat? What is coming next?”

On the night I visit Frasier and Gaier’s home in Cape Neddick, I don’t have time to wonder what we will be eating. The company, which includes educators, performers, and philanthropists, is too scintillating. “The guest list is important because you don’t want people from the same group,” Frasier will tell me later. “It’s more fun to have people from all walks of life—men and women, straight and gay, younger and older.” But even while I am getting caught up in conversation about a recent backyard theater performance staged for charity, my eyes begin to wander around the room. As a design writer, I’m easily seduced by eclectic decor, and this couple has a global collection of art and artifacts that requires immediate attention.

“We share a predilection for beautiful things,” Gaier explains as he walks me through the couple’s two-story home. Built in 1983, the house was in bad shape when the couple purchased it, but they quickly tore out the awkwardly placed fireplace, painted over the matte, chalky white walls, and installed large French doors that open outward to the wooden deck and the blooming gardens beyond. “In the summertime, it’s like we have double the space,” Gaier says. Frasier adds, “We put in these doors to broaden the deck, to make you want to walk into the garden and make that a part of your day.” In the back garden, a South Asian spirit house peeks out from among the black-eyed Susans and puffy white hydrangeas.

Inside, the couple has offset the bright chaos of their global art collection (including pieces by preeminent California artists Miguel Dominguez and Donal Hord, among others) with midcentury modern furniture in soothing shades of gray. The living room walls glow with a soft sheen from their grasscloth wallpaper. Sanded white oak floors have been treated with whitewash to avoid yellowing, and in the kitchen Spanish quartz countertops sit above simply designed maple cabinets. High on the walls of the kitchen hang two oversized art prints depicting rosy-faced chefs and cartoon livestock. Turns out, these funky pieces were moved here from Arrows, the couple’s famed restaurant in Ogunquit (now sold). “Our space is pretty small, and we didn’t want our kitchen to be some übermodern, all-white space” Gaier says. “That’s just not us.”

Instead, they’ve created a house filled with furniture made by family members (Frasier’s dad was a talented amateur carpenter) and pieces collected abroad during their travels. China in particular has long fascinated both chefs—Frasier speaks Mandarin and has been known to write ingredient lists in Chinese characters—but they own artworks representing nearly every continent, and from locales as diverse as Syria and San Diego. Upstairs in their bedroom, a collection of ceramic and metal tortoises adds a quirky touch to the bedside tables, which Frasier and Gaier have also stacked high with books, ready to read on their nights off from running their nearby upscale eatery, M.C. Perkins Cove.

As our house tour winds down and we walk back downstairs to rejoin the rest of the guests, I pass my hands along a wooden wall. Between the living room and the dining room, Frasier and Gaier installed this wall of old wood planks that they had removed from Arrows during a remodel. “They were original to the building, which dates back to the 1770s,” Gaier explains. He adds, “They’re a piece of our history, too.”

DINNER FIT FOR AN EMPEROR

“Is this the tea from that little shop in Old Delhi?” asks Clark Frasier, as Mark Gaier sets down a tray of iced chai masala. On a sweltering summer afternoon, we’re grateful for the cool drinks served on the front deck of their home. Frasier and Gaier, known colloquially as Mark and Clark, are relaxed hosts, experienced in the art of entertaining. The former owners of the renowned Ogunquit restaurant Arrows, James Beard–award winners, and current chef-owners of M.C. Perkins Cove, the couple are also world travelers. They’ve spent time in Thailand and Cambodia, Myanmar, China, and India, where they purchased the tea in question.

While we sit in the shade sipping the fragrant iced tea and admiring the home’s spectacular garden, Gaier and Frasier seem unruffled by the fact that several guests will soon be arriving for dinner. “The secret is to start as early as possible,” says Frasier, “then you’re not madly dashing around any more than necessary. Pretty much everything is already prepped. It’s just about putting it together. That’s how we like to do dinner parties.” A peek into the kitchen reveals his organizational skills, honed over many years. In one corner, neatly labeled plastic containers hold prepped ingredients and sauces. There’s an impressive collection of knives carefully laid out on the quartz countertop, each one with a story of how and where it was obtained. Whenever Gaier or Frasier mentions one of their far-flung adventures, it is free of pretense, simply a part of their shared experience. “Travel is our favorite thing,” says Gaier.

The dining area doors are open wide to the back deck, letting in the faintest whisper of a breeze. Friends of the couple have joined us: Kate, Kathy, Beverly, and Steve, all people they’ve known for years in various ways. We gather on the deck for cocktails and Pemaquid oysters served with a subtly spicy sauce that Frasier made days ago. Norman Dufour, manager at M.C. Perkins Cove, mixes and pours the refreshing drinks, a blend of watermelon puree, Cointreau, and vodka topped with soda, while Frasier grills ground pork satays skewered on pieces of raw sugarcane. “The first time we tried this was in Bali,” Gaier comments. The pork is blended with herbs, ginger, Indonesian soy sauce, and galangal, which they bought from an Asian market in Portsmouth where they’ve been purchasing ingredients “for decades.” The black pepper–caraway sauce for the skewers is a delightful accompaniment.

Inside, the table is beautifully set with jewel-toned linens, simple silver candlesticks, and several types of glassware, every item a reflection of the couple’s foreign adventures. The fuchsia silk runner is overlaid with a cobalt and green one from Denmark, along with turquoise napkins and coral-colored coasters from Saigon. Chinese red-lacquered square plates run down the center, and the white dinner plates are from Florence. It’s an eclectic mix of cultures, just like this evening’s menu.

The first course of clams and cod is roasted in cellophane-like fata paper bags that allow all the flavors and juices to cook together. It also makes a dramatic presentation as Frasier cuts into each one for guests, releasing a heavenly aroma and golden liquid of ginger, turmeric, and tomato. “It was inspired by our trip to India this year,” explains Frasier. “It’s also on the menu at M.C. Perkins Cove.” The Burmese salad is a bright mix of greens and herbs with soba noodles, crispy lotus root, and heirloom tomatoes with peanuts and a tangy dressing. The main course is a Frasier specialty: duck leg confit with a cherry–rhubarb sauce and cinnamon walnuts, perfectly paired with a Château Lamothe Saint-Germain Bordeaux. And dessert is smooth coconut panna cotta accented with mango puree. Throughout the meal, Frasier and Gaier are relaxed and hospitable, making sure every guest is comfortable and happy. They tell funny stories about restaurant life and traveling, also reminiscing with friends about previous dinner parties.

To spend time with this couple in the informal surroundings of their fascinating home is a memorable occasion. “It’s just a typical Tuesday night at Mark and Clark’s,” jokes guest Kathy Hurley. 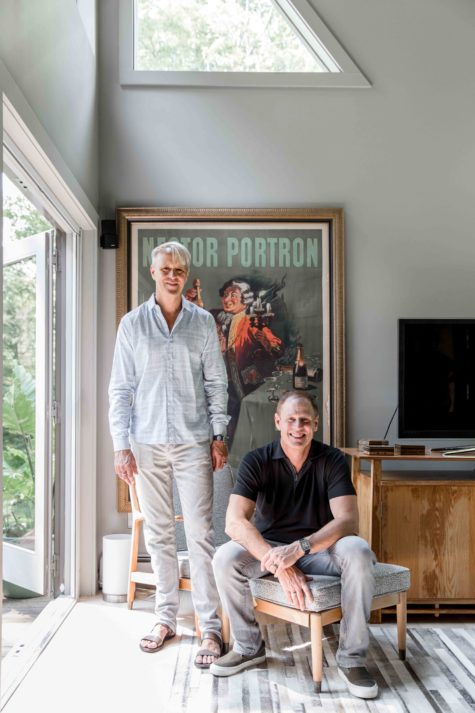 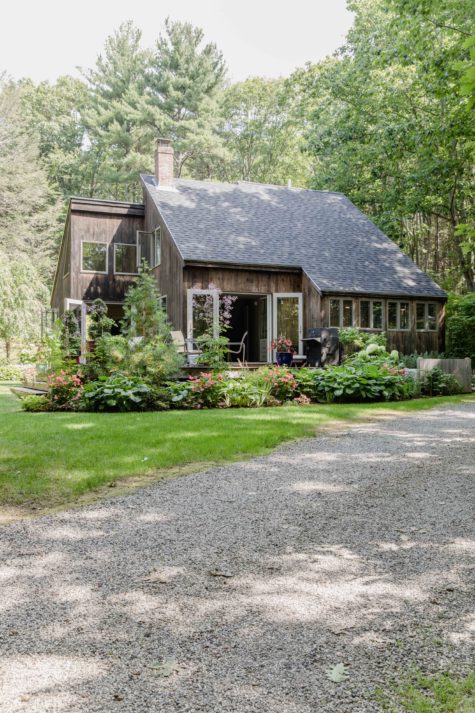 Large French doors give the small deck a roomier feel, welcoming guests to sit and enjoy a cocktail while surrounded by blooming gardens. 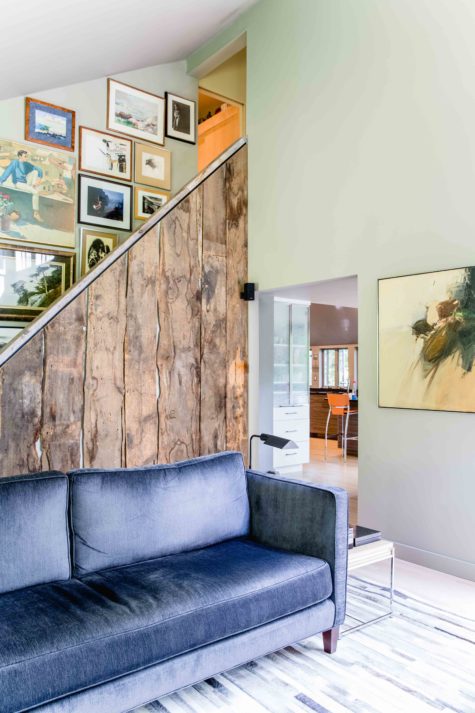 The deck outback is perfect for some peaceful conversation by the garden. 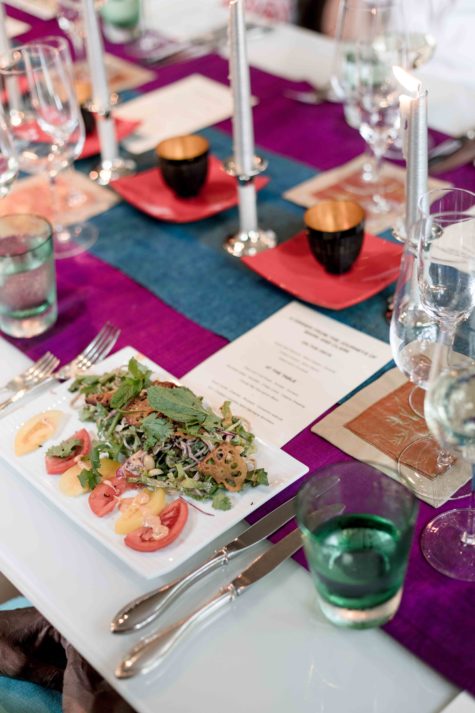