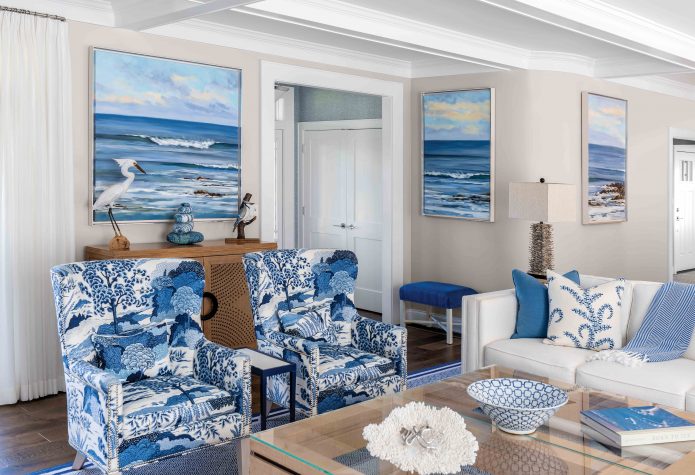 Louise Hurlbutt’s blue and white color scheme grounds the busy prints and patterns in this living room. On the walls hangs a series of seascapes by Jill Matthews. The coffee table is from Hurlbutt Designs (made from two raffia-wrapped tables joined by a glass top), and the chairs feature fabric from Thibaut. A cairn sculpture by David Jacobson can be seen in the background. 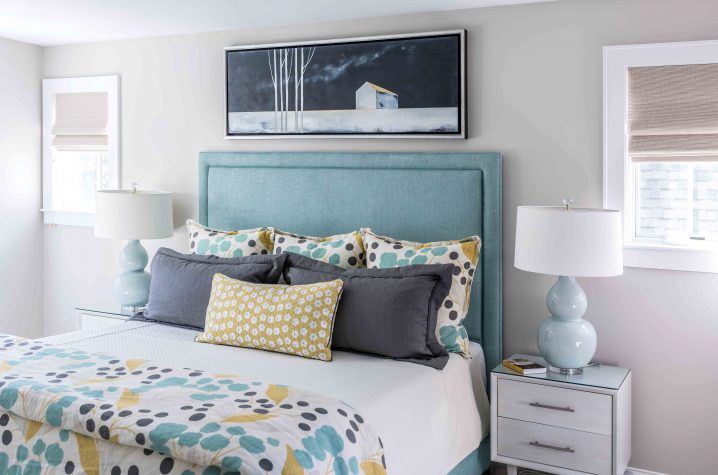 A painting by Ingunn Milla Joergensen hangs above a custom-made padded headboard. “In their daughter’s bedroom, we made it a bit more youthful,” says Hurlbutt. “She loves gray, so we made her custom shams. When we saw that painting at John’s gallery, we knew right away it should go over the bed.” 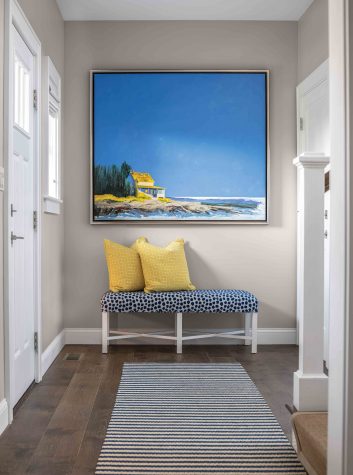 "Blue Island Skies" by Janis H. Sanders hangs over a bench with colorful pillows to match. 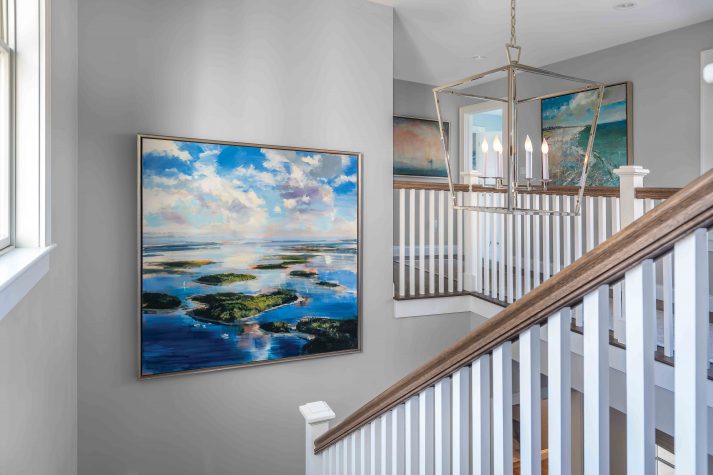 This modern chandelier is by Visual Comfort. “I liked its clean lines,” says Hurlbutt. The seascape with islands is by Craig Mooney. 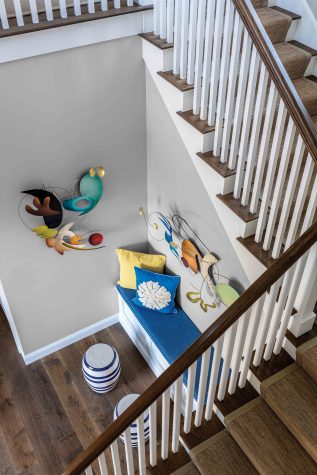 Hurlbutt matched the colorful pillows on this bench to the Mark Davis sculptures that hang on the wall above. 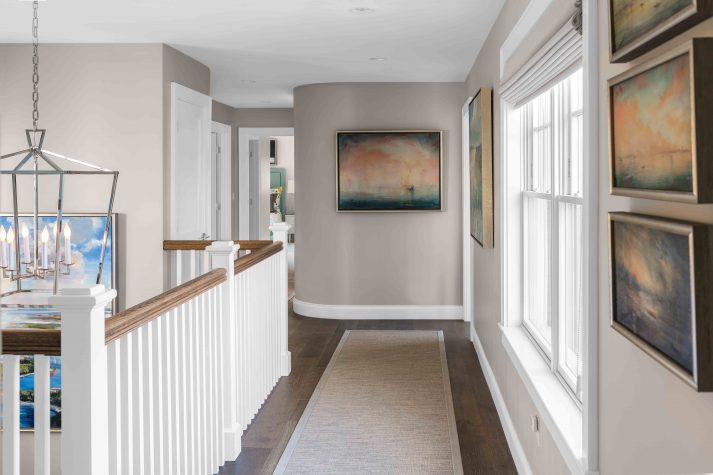 Moody seascapes by John LeCours were sourced (like the rest of the family’s local art collection) from Maine Art Hill. 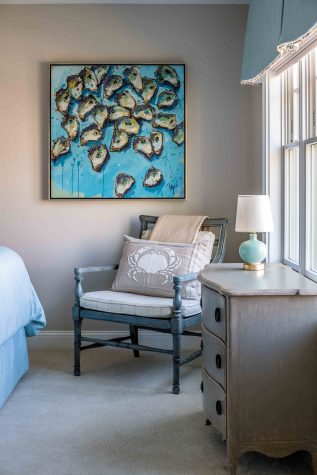 The homeowners love going out for oysters, and this piece by Trip Park is a nod to their favorite local snack. 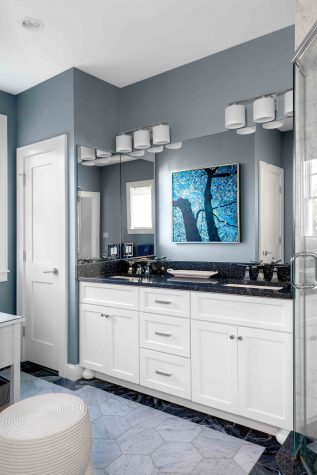 In the owners’ suite bathroom, Spain hung a painting by Christopher O’Connor directly opposite the mirror. For texture, Hurlbutt chose a vinyl grasscloth-look wallpaper. Tile is from Distinctive Tile and Design. 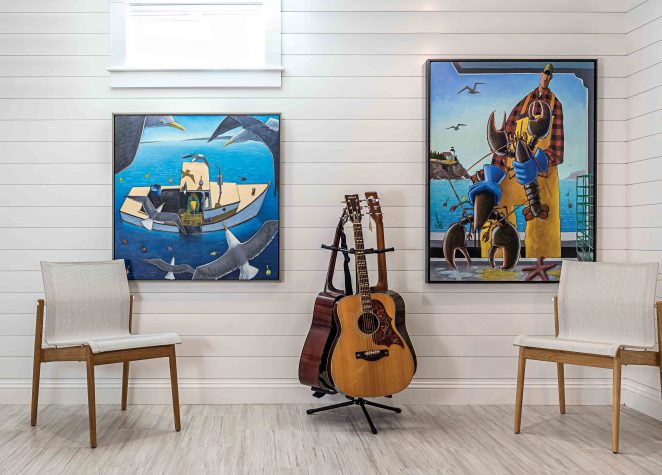 Lobsterman portraits by David Witbeck hang above the games and guitars. 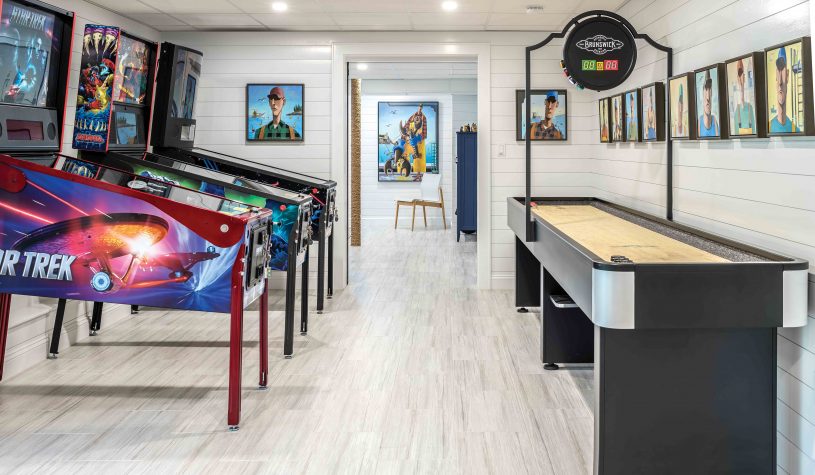 The basement is a bit of a tonal shift from the rest of the house, but it fits with the space’s intended use. 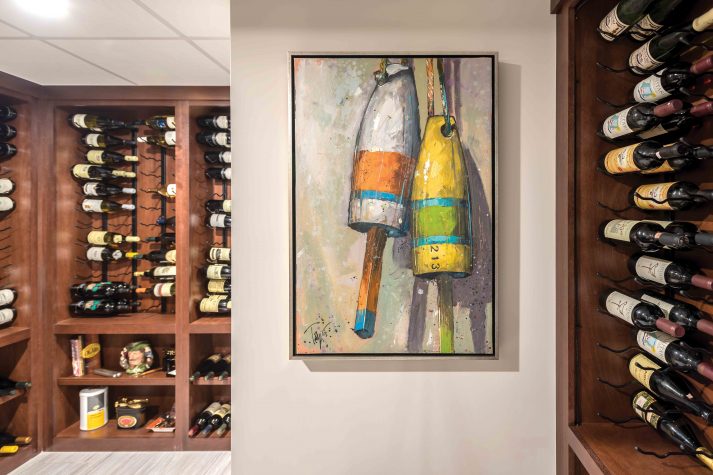 Paintings by Trip Park hang in the wine room. 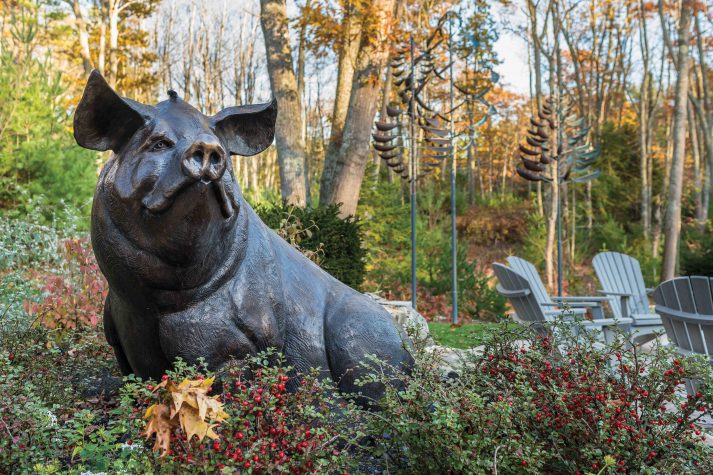 Outside, sculptures by Lyman Whitaker move with the wind. The pig sculpture, "Eat More Beef," has been in the family for 20 years.

Tami and Dr. Christos Cotsakos had lived around the world and owned houses in towns across the United States and Europe, but they had never vacationed in Maine. Before 2018, they hadn’t really considered Maine. Then a few of their friends moved to Kennebunkport and invited the couple to come for a visit. “The minute we came to town,” Tami remembers, “we were like, ‘Oh my, this is different.’”

After that first visit, everything happened quickly. From across the country, their daughter Suzanne went online to look for a potential vacation home. She found one; it was a four-bedroom contemporary cottage-style house near the ocean. It had been built as a showpiece, so it wasn’t quite finished, but it was pretty close to perfect. “Real estate is one of our hobbies,” explains Christos. “We looked at it, and we fell in love.”

But they didn’t want to deal with a lengthy remodel, and frankly the house didn’t need it. What it did need was furnishings, and an updated basement. First, they approached Louise Hurlbutt, whom the Cotsakoses knew socially. “They asked if we could finish the house in a month,” she remembers. “What we do at the store is put together vignettes, so anytime we can sell a finished vignette, it works.” Hurlbutt was able to draw from the stock in her store, Hurlbutt Designs, to deck the house in cool ocean tones from top to bottom. Since the couple wanted to make the most of their square footage, Hurlbutt suggested bringing on Spang Builders to finish the basement and “dress it up throughout,” as project manager Norm Laliberte puts it. “We put in crown mouldings and created custom built-ins for the kitchen, but the biggest transformation was the basement,” he explains.

Where there was once gray concrete, now there are white nickel-gap walls and wood-look tile flooring. The space has been entirely transformed, with a sleek wooden bar, a prefab wine cellar (from Vigilant of Dover, New Hampshire), and load-bearing pillars wrapped in nautical rope. “That was one of Louise’s great ideas,” says Laliberte. “We worked hand-in-hand with her. The Cotsakoses knew conceptually what they wanted and where they wanted it, and we made it all fit.” There’s a music area, space for games like pinball and air hockey, and storage for the family’s collection of Christmas decorations. And, while many basements become the default repositories for kitschy wall hangings and discarded gifts, this one would not. The Cotsakoses were committed to showcasing local art throughout their home, and the basement would be no exception.

Except they didn’t know exactly what to put down there. By this point, they had been working with John Spain from Maine Art Hill for a few months. They had visited his galleries shortly after purchasing the house. “They happened to come in with mutual friends, who were also clients of ours,” Spain says. “They would respond to one artist, turn around and look at a wall, and then respond to that artist, too. They had that sort of response where the gallery felt like a body of work they would want in their home.” Over the course of the next year, Spain made over a dozen visits to the couple’s new house. He brought painting after painting to try on the walls, including seascapes by John LeCours, Craig Mooney, and Claire Bigbee. He brought sculptures, too, including whimsical mobiles by Mark Davis, and a variety of objets d’art. “They learned have faith in what I do,” he says. So when it came time to decorate the basement and Tami wasn’t quite sure about Spain’s original suggestion for the space, she decided to go ahead and give it a try. Spain thought one of David Witbeck’s lobstermen might work there, but he didn’t know which one the couple would like. The flat portraits were a departure from their dreamy landscapes, but they trusted Spain’s instincts. He brought over an entire series, and Tami and Christos ended up buying them all. Now Witbeck’s angular fishermen are lined up over the games. “It was so fabulous,” says Spain. “It created a playful mood that just worked.”

A sense of calm joy radiates from the walls and furnishings upstairs, too. From their early discussions, Hurlbutt knew that this couple likes colors. They like art and textures and big moments. “After we were done, they showed me pictures of their other homes, and they had a lot of deep burgundies and reds, French rococo furniture, Asian-inspired art, brocades,” she says. At first, they weren’t entirely sold on a blue and white color palette, but Hurlbutt made a strong case for keeping it cool and coastal. “This is 180 degrees different from our house in Florida,” Tami admits. “But we were talking about this the other night, and honestly, what other style would we do the Maine house in? I’ve done every other style. This just fits.”

To serve as a backdrop for the sumptuous blue and white furnishings and the Cotsakoses’ ever-growing collection of art, Hurlbutt chose paints in soft grays and shades of taupe. She installed grasscloth wallpaper in the front hallway to provide a bit of warmth and texture, and updated all the lighting to match the existing polished nickel hardware. In the living room and owners’ suite, she put down custom-cut flat-weave wool rugs from Stark. “The border is hand-sewn on so that you can’t see it,” she says. “It’s a bit expensive, so it takes a certain client to do that kind of work.” With this neutral ground laid, Hurlbutt was able to bring in brighter tones for the furnishings, like the armchairs in the living room, which have been upholstered with a cobalt and ivory Thibaut fabric, and the slate blue chenille padded headboard for the couple’s bed. “They really like luxurious textiles,” says Hurlbutt. “When you do fabric headboards, and make them soft and cozy, it makes the whole room so much more inviting.”

Although the furniture was mostly in place when the couple began purchasing art, Spain and Hurlbutt did work together to ensure that their selections would not only look good together but would speak to one another through theme, color, and arrangement. Sometimes, this meant switching things up to accommodate new purchases. “We had to work really hard to get the pillows right on the beds,” says Hurlbutt. “It was important that they work with the paintings.” For example, the couple finished the first round of decorating with a set of printed pillows on an upstairs guest room bed, but after purchasing two oyster-themed paintings from Spain’s gallery (one of which they commis-sioned directly from artist Trip Park), those pillows no longer worked. “We found new fabrics that would blend, color-wise, with the art,” explains Hurlbutt. “We found seashell fabric, and then Tami found the crab pillow. It just kept evolving. And I have to say, there was such wonderful teamwork on this project. I loved it. I loved what happened and how it came out.”

Although the house is now filled with comfortable furniture and interesting art, the Cotsakoses will probably never be entirely done decorating, simply because they love shopping locally and supporting Maine-based artists. “For me,” Christos says, “Kennebunkport is all about wonderment. Every day I spend there, I feel wonder. It’s such a refreshing place.” At this point, Tami and Christos have amassed a collection of works by 22 artists, “and each one brings their own special point of view,” Christos adds. “They bring their own way to imagine and enjoy life, and looking at their work, it becomes real to you. We’re so fortunate to be able to have that.” 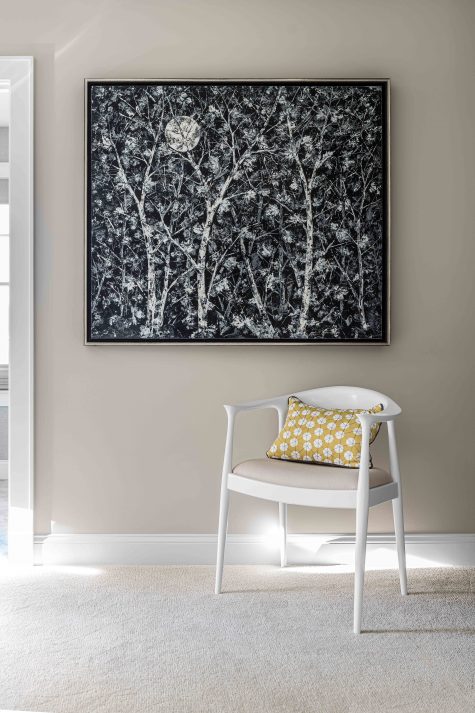 A painting by Donald Rainville hangs upstairs in Tami and Christo Cotsakos’s new Kennebunkport home, which was built as a show house by Coburn Fine Homes, decorated by Louise Hurlbutt, and renovated by Spang Builders. 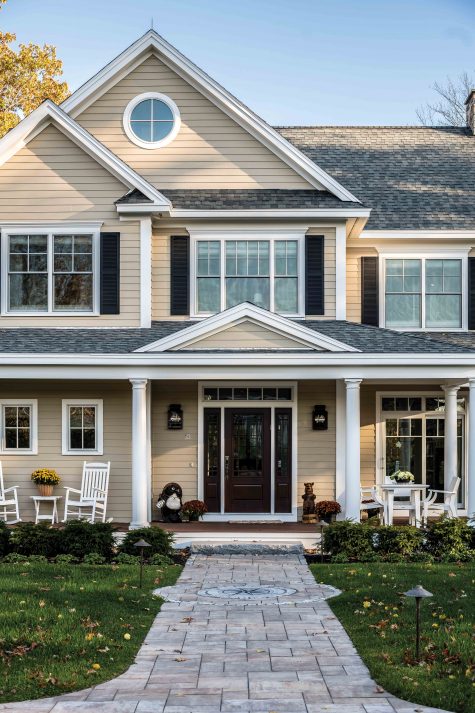 The exterior view of the main entrance of the Cotsakos’s home, built buy Coburn Fine Homes.