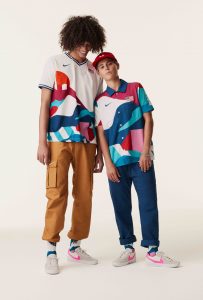 ng is making its Olympic debut as a sport at the 2020 Tokyo summer games. NIKE has designed the uniforms for the three competing countries: the United States, France, and Brazil. Nike collaborated with ex-skateboarder and Dutch artist PIET PARRA to create the look for the uniforms; each one is an homage to the country’s style and sporting history. Each piece is sustainable too, using environmentally conscious manufacturing and recycled materials. Traditionally, skateboarding is focused around individuality, so a uniform is a new concept in the sport. “Nike has been working with us to try and figure out the best possible outfit to feel comfortable in,” says skateboarder Sean Malto. The U.S. uniforms consist of a basketball jersey top and khaki cargo pants for men, and a button-down shirt and navy chinos for women.

The TONTINE MALL, a longtime fixture in Brunswick’s downtown, is getting a “five-star” facelift with a nod to the building’s industrial past. Owner and developer DAN CATLIN plans to invest $2.75 million to give the mall a glass porch, a three-season patio, a new interior layout with more natural lighting and windows, and two new floors of 16 market-rate apartments with elevator access. The first-floor interior common-area seating will remain to keep the community feel of the space. Construction is anticipated to begin in fall 2020 and will be completed in two phases: renovations to the first-floor commercial spaces will come first and will offer two new restaurant spaces; construction of 4 two-bedroom apartment units and 12 one-bedroom units will form the second phase.

Leisure furniture icon BROWN JORDAN is celebrating its 75th anniversary with the relaunch of one of its best-known collections: the WALTER LAMB ALUMINUM COLLECTION. The original collection was released in 1947 and remains highly s 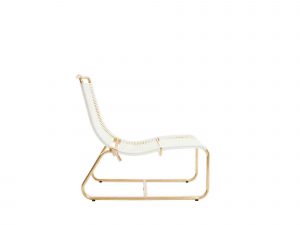 ought after by collectors and designers to this day. When it was originally produced, Walter Lamb worked with founders Robert Brown and Hubert Jordan to create elegant patio furniture from salvaged bronze and brass that was once part of sunken Pearl Harbor naval ships. Today, the collection is made with aluminum in place of bronze for durable, lightweight, and long-lasting furniture. The collection has also been expanded to offer 21 different finishes and a variety of table sizes and tabletop options, along with three different rope colors. (Photo courtesy of Design Within Reach)

Box and foam product manufacturer and distributor VOLK PACKAGING CORP. is upgrading its operations. In an estimated $7 million investment, the Biddeford-based company will become the first in the United States to have a “flexo folder-gluer,” which is a large box-making machine that will improve production efficiency sixfold. “The machines we currently have need to be turned off and opened up to set up the next job,” says company founder Derek Volk in an interview with MaineBiz. And it takes an average of 29 minutes to set up for the next job each time. The set-up time for the new machine will be less than five minutes. As part of the investment, warehouse space will be added to accommodate higher production. The machine upgrade is in partnership with JS MACHINE, a Chinese manufacturer of packaging machinery; Volk Packaging will act as JS Machine’s first showroom for their technology in North America. 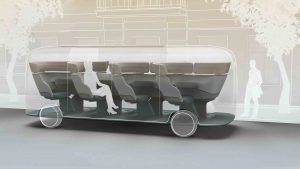 gn studio LAYER has created an autonomous ride-sharing concept called JOYN. The vehicle is made up of two rows of eight modular seats in S-shaped sets, each facing an opposite direction to maximize privacy. A glass exterior gives passengers unobstructed views of their surroundings. Joyn was created in response to uncertainty around ride-sharing safety and viability, which ultimately led to the revocation of Uber’s operating license in London. The design concept was inspired by airplane cabins and offers eco-friendly benefits: after inputting passenger number and destination, users can select their desired car and seat. Riders will be rewarded through a point system, which can be redeemed at participating restaurants and coffee shops, or points can be donated to charity for their cash value.

Westbrook’s ROCK ROW is getting a hotel. ELEMENT by WESTIN is inspired by the outdoors and will offer 122 rooms in five stories with vibrant, natural living spaces. The hotel will be surrounded by walking paths and green spaces overlooking a granite quarry and lake. “The Element brand by Westin has a focus on livability and healthy living,” says Jared Schillinger, vice president of business development at Brandt Hospitality Group, which operates the hotel. “It will be very complementary to the balance of the Rock Row development.” Element is slated to open in 2022. Rock Row covers 110 acres and will be the second largest mixed-use complex in New England once complete.

Over the past several years, IKEA has been working in collaboration 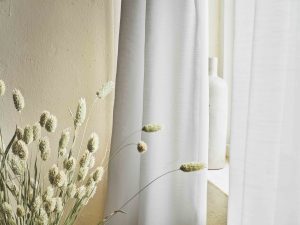 with European and Asian universities to develop an air-purifying curtain, called the GUNRID curtain. The surface of the curtain is coated in a photocatalyst mineral that breaks down pollutants when natural or artificial light shines through it. The technology is similar to photosynthesis and creates a cleaner indoor environment for its users. The curtain was designed in response to increasing air pollution in cities around the world, which kills as many as 7 million people each year, according to the World Trade Organization. The curtain’s retail launch is
expected to happen as early as next year.

APPLE has filed a patent for a new iMac design. Titled “Electronic Device with Glass Housing Member” in the patent, the design integrates the keyboard, touchpad, and screen into a single pane of bent glass, but alternative designs show that the keyboard may be detachable. A wedge-like structure behind the display will support the device and house the processing unit and electrical components. Part of the patent is a design that would allow a MacBook laptop to be docked into the device and connected to the iMac, allowing the user to have a larger display while using the laptop keyboard and trackpad. The glass unit may also have the ability to fold down the middle when not in use for easy storage and transportation.