A landscape architect, a stonemason, and a woodworker lend polish to a designer’s vision 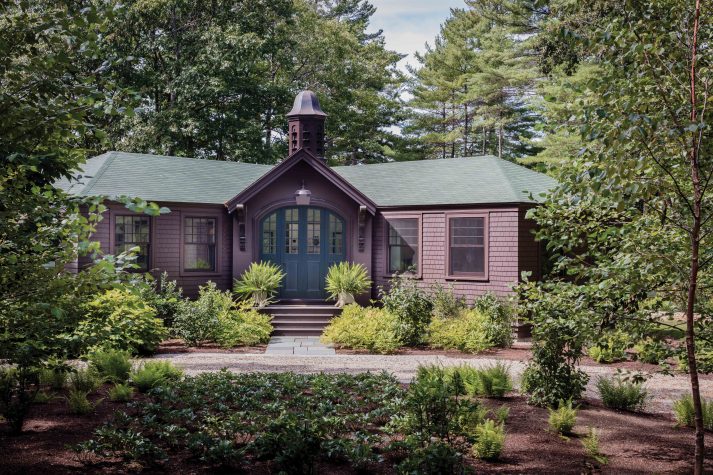 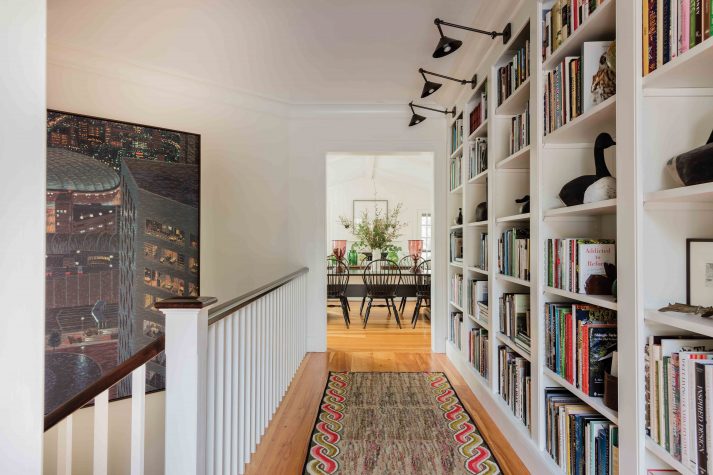 Van Boven found primitive duck decoys at the Cornish Trading Company in Cornish, Maine. “Maxine” picture lights are from the Urban Electric Company. On the hall floor is an antique hand-hooked rug. 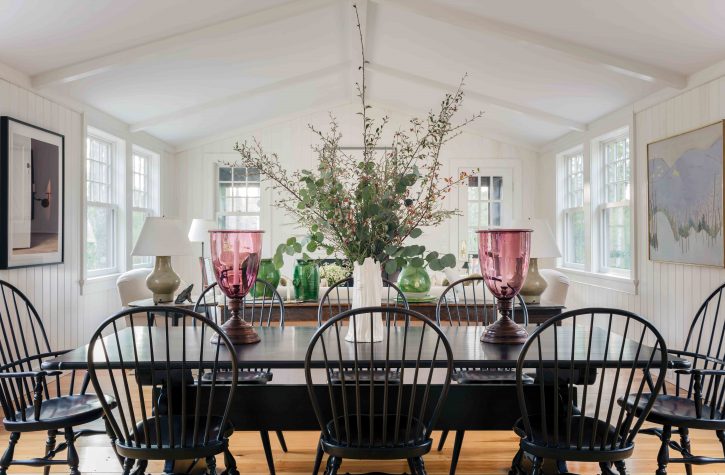 Van Boven cuts and arranges native winterberry for the dining room table during the holidays. 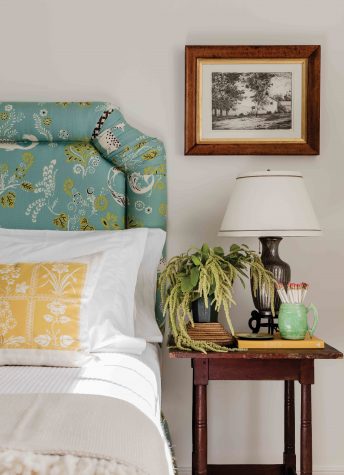 In one bedroom is a lithograph by Bolton Brown called "The Front Yard." 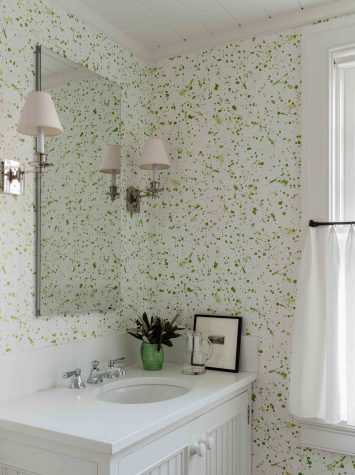 The home offers features two and a half baths. 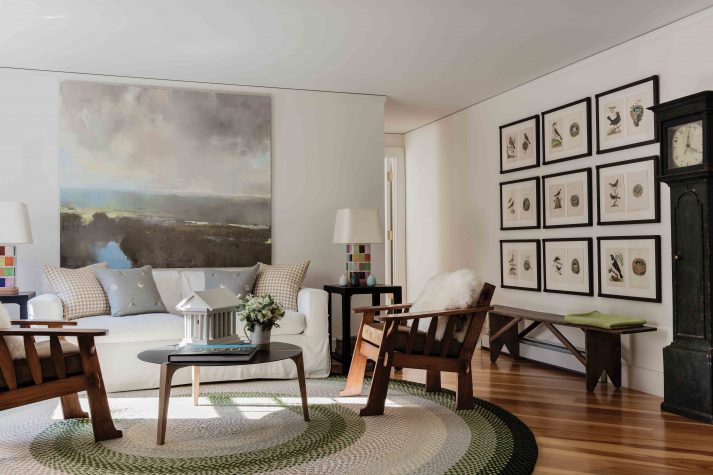 The large oil painting by Eric Aho is called "The River at Putney"; the print grouping is James Bolton’s "Birds, Nests and Eggs"; the Hawaiian lounge chairs are in teak with deer hide cushions; and the painted longcase clock is circa 1760. 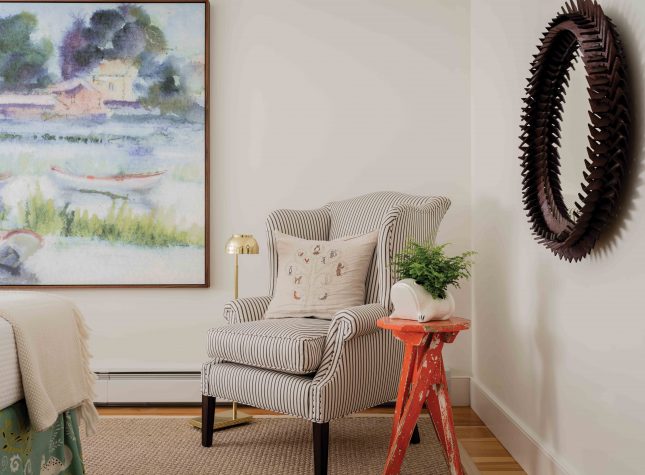 The large untitled painting is by Gregory Van Boven. The American folk art mirror, circa 1880, is composed of interlocking triangular wood elements. 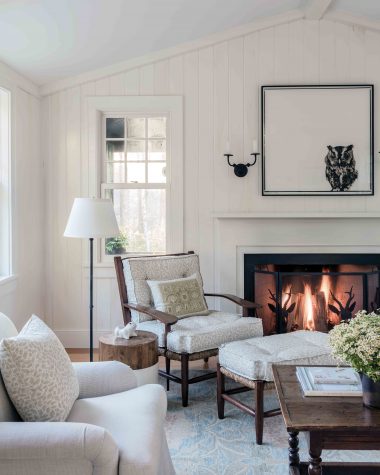 "Owl-5," a photograph by Nine Francois, hangs over the mantel of the living room, while a white biscuit frog by Nymphenburg lies on the side table. 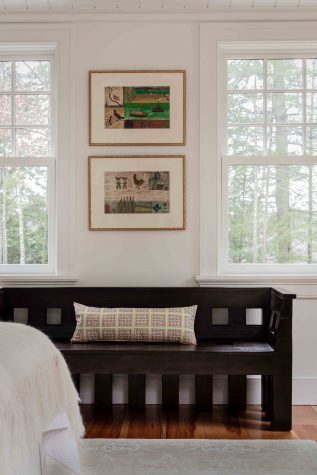 A pair of early twentieth-century Swedish watercolors is hung in one bedroom. 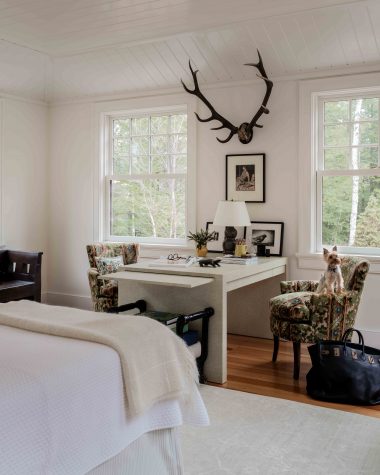 The neutral color scheme complements the outdoors visible through the home’s windows. 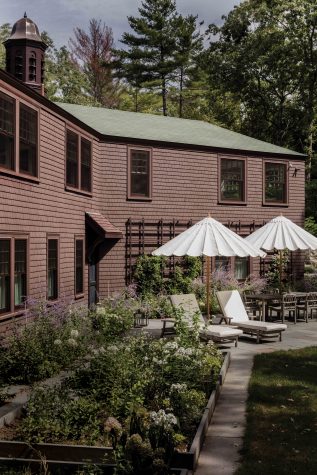 When the time came for interior designer Gregory Van Boven and his husband, David Beck, to build a second home in southern Maine, they assembled a team of experts who doubled as artists. Among them were a Boston-based landscape architect, a hands-on custom woodworker, and a stone mason who’s also a poet.

For three years, the couple from Beacon Hill in Boston had been spending weekends camping out on their 120-acre lot that Beck discovered in 2010. They were studying the property and looking for opportunities. Later, Van Boven, trained in both architecture and interior design, built four models.

They eventually decided on a 3,000-square-foot Y-shaped home. “What I wanted was a house that would blend into the landscape and look like it had been there for a while,” Van Boven says. “I thought about a house that was all glass, but this is Maine, with a lot of hunters, and I didn’t want it to get all shot up.”

Their year-round weekend getaway is a modified shingle-style home, designed to accommodate an eclectic collection of art from auctions and galleries in Boston, New York, and Maine. “We feel lucky to have so many favorite—and different—pieces of art sharing our home,” he says.

Their artwork is generously displayed across two stories of the house, where two guest bedrooms, a bathroom, and family room share the ground level, with a staircase at the center of the Y. Above are the foyer, kitchen, owners’ suite, and screened porch.

Van Boven was involved in every step of the design. “He knew where to place the house, but first he did the master plan, with the septic, driveway, house, easements, and existing trees, before we decided on the garden plan,” says Keith LeBlanc, partner in LeBlanc Jones Landscape Architects in Boston. “He wanted to make it all fit.”

LeBlanc edited down an existing driveway lined with hemlock, pine, and spruce trees; he also added a loop at the entry where guests can be dropped off and a parking area with a cluster of 12 white birch trees nearby. “We capitalized on screening and clearing trees, so it’s a little more integrated than a ragged edge of forest and then an open area,” he says. “We manipulated the woodlands and got some sunlight pockets for an enhanced setting.”

Behind the house is a 45-acre pond for kayaks and canoes, one of the reasons the expansive lot initially appealed to the couple so much. From the stairs of the screened porch, LeBlanc added a walkway flanked by native plants down to the pond’s edge. On the other side he laid out stepped and terraced gardens.

Sensitive to his client’s primary color preference, LeBlanc capitalized on it wherever he could. “Gregory loves the color white, and so we made a design in terms of a rectangle showing white and silver in a textural mass that contrasts with the more native ferns and plants,” he says. “Having white colors and gray on the building makes sense as well.”

For much of the landscape, he called for stone walls like those running throughout the fields of rural Maine. And he looked to Ethan Stebbins, a stonemason from Perennial Stone in North Yarmouth—who studied poetry at New York University and is now shopping his first manuscript—to execute his vision.

“I started out with a couple of retaining walls and steps leading to them,” Stebbins says. “It evolved organically as we went, but he had the basic bones of what he wanted.”

Stebbins worked in Black Mountain granite for structure, and bluestone from New York and Pennsylvania for flat work. “I did some stone steps down to the pond, freestanding entry walls at the front of the driveway, and a walkway to the front door,” he says.

For the retaining walls, Stebbins drew on large, monolithic pieces to start with, moving, cutting, and fitting them together. Their site was sloped, so his challenge was to find a way to build them and deliver permanence. “That’s my standard for dry stonework—to be sure it will be there long after I’m gone,” he says. “It’s hard, but it can be rewarding too.”

His work demands careful excavation and a foundation with larger stones on the bottom. Next, he ties in smaller stones, braces vertical joints, and inserts the length of stones into the wall. It’s a complex process requiring vision and painstaking execution.

For inspiration, Stebbins has traveled to see what he calls the “inspiring and jaw-dropping” masonry of ancient Peru. But he looks to Maine and Vermont too, and to Europe. “There are excellent dry stone walls in Great Britain, and I’ve been utilizing what they’ve done there,” he says. “There are some in England that are still standing 500 years after they were built.”

The home’s exterior is clad in stained white cedar shingles. Its windows are mahogany and African sipo, woods with similar durability. Inside, the windows are quarter-sawn white oak. Most of the finish woodwork was done by James Eaton of Little Harbor Window Company in Berwick and his son, Cody, of Red Dog Builders in York.

When James Eaton arrived on the job, he knew the level of design he’d be working with. “We deal with architects from New York City and Washington, D.C., so we get to see a lot of different concepts,” he says. “But when Gregory puts a house or a room together, it’s stunning—so we were very excited to work on his personal house.”

The project was already underway, and not without its challenges. First and foremost was its existing, curved-at-the-top entry door. It was not working well.

“I looked at it, assessed what was wrong with it, and came to the conclusion that it was not fixable,” he says. “So I drew a new one, match-ing the shape and size, and increasing the thick-ness from an inch and three-quarters to two and one-quarter.”

The construction process required tremendous attention to detail. “We were gluing half-inch pieces together and then placing veneer over them, to make it less susceptible to warping,” he says. “When you get a long piece of wood and a house is warm on the inside and cold on the outside—and the opposite in summer—it tends to make the wood bow because of flexible materials.”

Not the new door, though. It’s more stable than the door they had previously envisioned. And because it’s so much weightier, James Eaton added bigger hinges. “It was really big and heavy—close to 400 pounds,” he says. “When you have something that big, you have to be sure the hinges and the frame will hold up when it’s slammed.”

All in all, the home was a successful collaboration between client and artisans. “We submitted a couple of ideas for the house, and Gregory came back with additional information, and we were able to come up with exactly what he wanted,” Eaton says. “We make a project last, but it looks like what they want it to look like.”

That goes for Stebbins too. “Gregory’s the kind of client you hope to get,” he says. “He had ideas and gave me creative space and took my opinions into account—he knows what he wants, but he’s not overbearing.”

And for LeBlanc as well, who in the springtime drove Van Boven around to visit Boston-area nurseries: “He’ll go with us and load up his car with perennials and ferns,” LeBlanc says. “They love the garden-ing aspect—they’re not hands-off, which is really nice.”

That’s because, like the experts they hired, these clients are their own kind of artists as well. 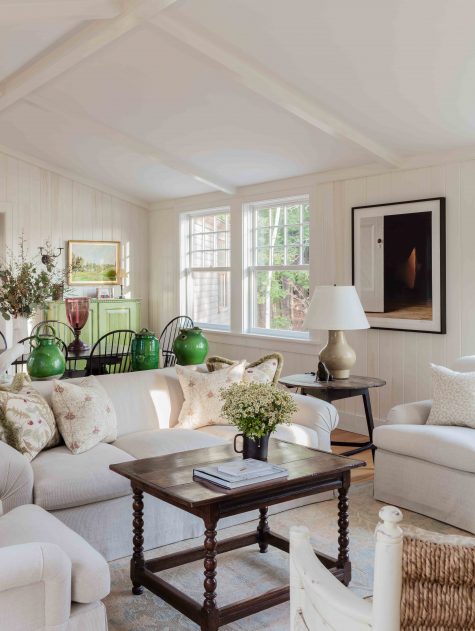 The photograph in the living area is by Brad Maushart. The landscape in the background is by John Kollig, and on the table is a collection of nineteenth-century French green-glazed pottery. 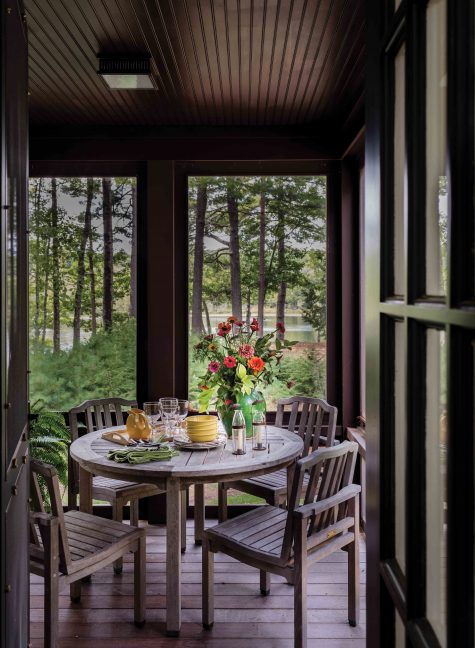