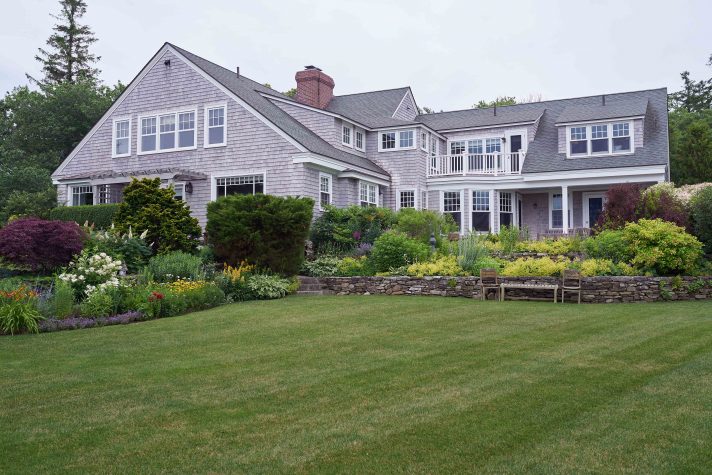 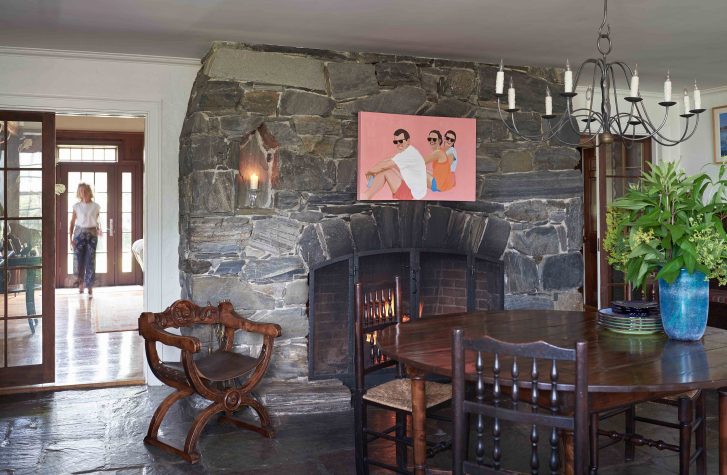 Part of the original cottage, this space with a fieldstone fireplace was probably a multipurpose area. Homeowner Karen McDonald outfitted it with fireside seating and a table that can accommodate dining or a game of cards. 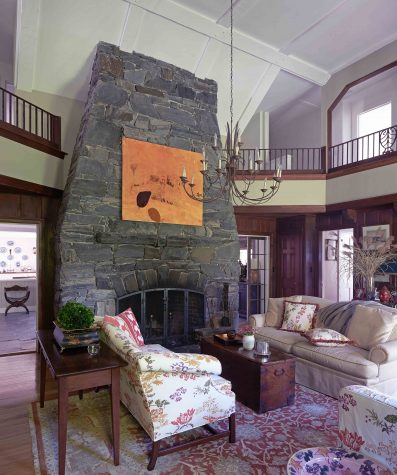 A Graeme Todd painting above the mantel in the living room. The rooms and McDonald’s studio are accessed from the mezzanine overhead. 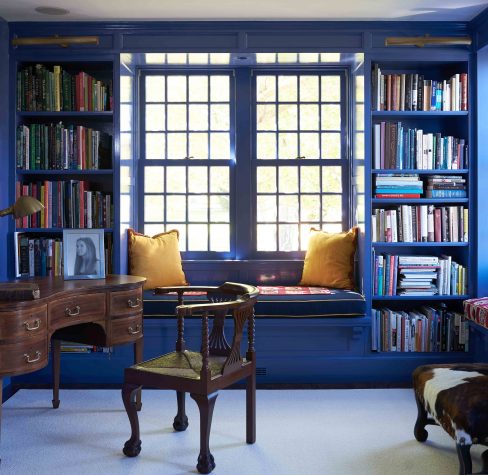 Painted a saturated Prussian blue, the library features shelving and millwork designed by McDonald and executed by Pond Cove Millwork. 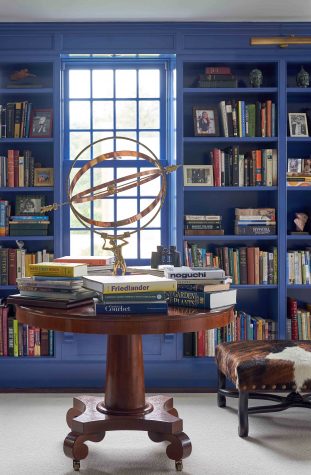 On a center hall table is an antique astrolabe. 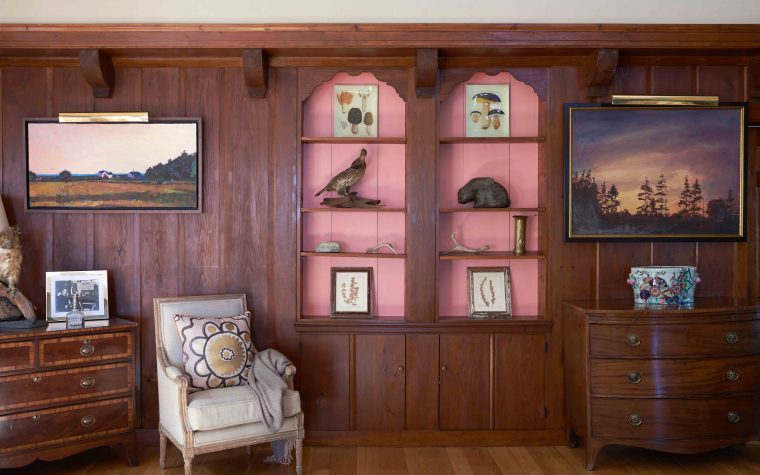 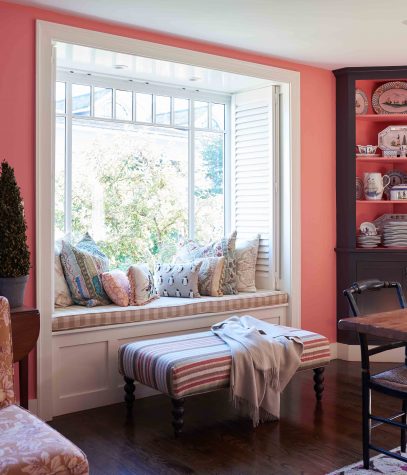 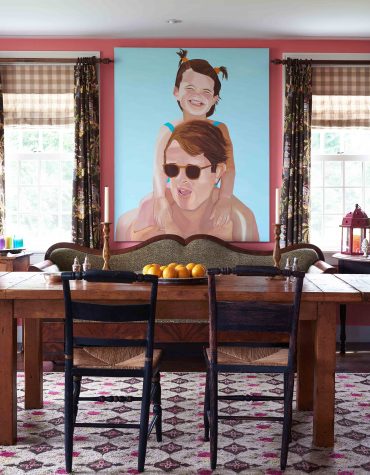 Between two windows dressed in gingham shades and patterned curtains is a portrait of McDonald’s late husband, James, and one of their daughters. McDonald has collected Hitchcock chairs for years. Underfoot, a hand-hooked rug evokes period craft. 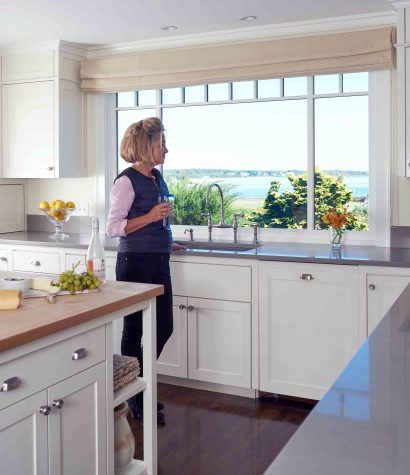 McDonald takes in ocean views from her kitchen, which showcases stone countertops from Morningstar Stone and Tile. 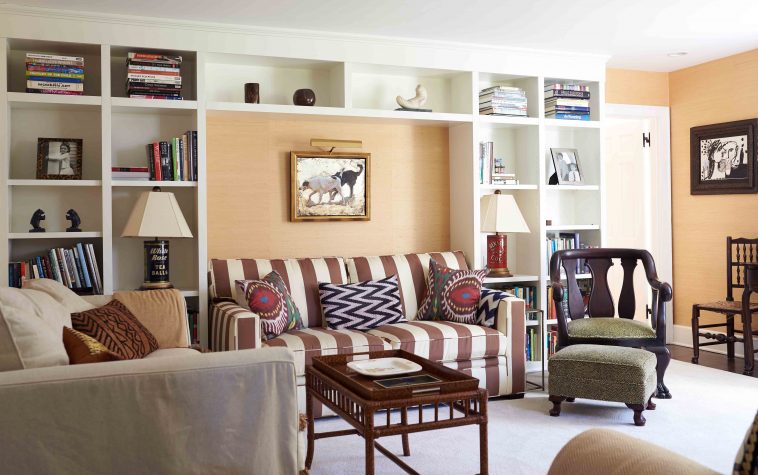 In a family room, a sofa nestles in a niche with a painting of dogs purchased from a Cuban artist above it and contemporary Asian photography all around. 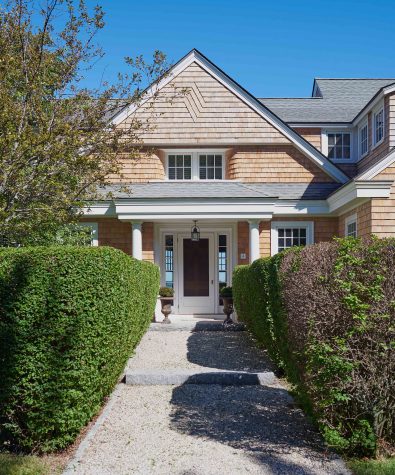 The new entrance riffs on traditional shingle architecture with an asymmetrical pattern on the pediment.

“It’s a wandering house,” says Karen McDonald of the circa-1910 innkeeper’s cottage she and her late husband, James, restored on the coast of southern Maine. And indeed, it is a warren of cozy rooms whose lack of ordered progression and formal procession give them a meandering experiential ease that feels instantly relaxed and unrushed.

The McDonalds had regularly summered in the area with friends over several decades when, 14 years ago, they decided to buy the innkeeper’s cottage. “It was worth saving for its character and experience,” recalls Luke Lockwood, owner of Scarborough-based design–build company Eider Investments, who collaborated with McDonald on the renovation.

McDonald, a painter and art advocate—who sits on the board of the Noguchi Museum in New York and is a great supporter of the Portland Museum of Art and Maine College of Art—had owned an interior design business and had renovated other residences, including a farmhouse in Vermont. So she was versed enough in the mechanics and aesthetics to spearhead the project then have Eider translate her concepts into three-dimensional reality. But she decided to start small, converting two guest rooms into an expansive kitchen generously lined with windows so she could look out to the ocean whenever she wanted.  “We lived in it for a year so we could envision exactly what we needed,” she says.

Over 12 months, what they determined was that they wanted an addition that would add another 2,000 square feet to the existing 3,000. “The guiding principle,” she explains, “was that, while making it a wonderful place to live in, we also wanted to retain the integrity of being a 1910 innkeeper’s cottage.” That meant, among other things, adhering to the scale of the original structure. “The roofline could have been raised,” she notes, “but we kept it under the maximum by two feet.”

Another integral aspect of the project had to do with the extensive gardens McDonald planned for the home. She is passionate about landscaping, she says, and over the years has taken classes at Radcliffe, the Arnold Arboretum in Boston, and the New York Botanical Garden. “If you love your landscape, it’s also a way of living,” she says. She wanted that way of living seamlessly incorporated into the home. Many rooms, particularly at the back of the house, open onto exterior patios and green spaces via French doors so that, as McDonald says, “You feel like the landscape is immediate.”

To the left just inside the addition entry is a library enveloped in millwork painted a glossy Prussian blue. McDonald designed the shelving with moulding and other details to give it a period appearance that feels aligned with the original home. There is also a new “ocean-view room,” so-named for its panoramic coastal vistas, where four comfortably cushy armchairs gather around a low table. As throughout the house, many of the furnishings are either family heirlooms (an eighteenth-century table in the entry, a lady’s writing desk in the library, Chinese export porcelain from Canton in the ocean room) or acquired over time at antique stores, consignment houses, and secondhand shops, then restored.

Upstairs, the contemporary addition also includes a commodiously proportioned owners’ suite—it encompasses his-and-hers baths and dressing rooms as well as a his-and-hers office—and a separate owners’ laundry. Otherwise, says Lockwood, “It’s still very similar to what it was: the big open fireplaces, the stairs going up two sides, the detail of the paneling.” In order to make the newer spaces feel congruent with the 1910 original, Lockwood suggested shiplap siding for the walls. Not only is it appropriate for the marine setting, but, says Lockwood, “It’s a style and look that would be complementary. It was similar to the existing paneling, but we suggested a painted version to lighten it up.” Lockwood had already opened the kitchen to the dining room (which McDonald painted salmon to offer a rich contrast to the black of the Hitchcock dining chairs she’s been collecting for years). Now he also opened the kitchen to the ocean-view room, thus allowing light to flow throughout in a way that feels airy and more suited to modern lifestyles.

The focal point of the older section of the house is the expansive living room with cathedral ceilings and an impressive fieldstone double fireplace (the other side faces a smaller sitting room). A large canvas by Scottish artist Graeme Todd presides over an eclectic assembly of furniture: facing camel-back sofas, a French bergère, antique Chinese chairs, and an English chest. In the smaller sitting room are a pair of wing chairs that, says McDonald, “are the only things in the entire house that were original to the innkeeper’s house.” She recovered these in a Scottish tartan. There is also a heavily carved Jacobean-style bench that was a secondhand furniture store find.

Throughout the various spaces, of course, is a lot of McDonald’s own, colorful, graphic oil paintings. They are mixed in with Larry Horowitz landscapes, Asian contemporary photography, and other kinds of art. Painting is a vocation by which McDonald comes honestly. Her grandmother was a painter of exotic scenes, her mother was a sculptor who worked in many media, and McDonald herself spent many of her childhood afternoons with her grandmother, having tea and sketching. She studied art history and took some studio courses, “but my training was through osmosis, really.” One big reason she sold her apartment in New York and moved here full-time, she says, had to do precisely with her art: “Over the last four years I’d return to New York less and less, sometimes not show up at all. I became totally intrigued by the local art scene in Portland.”

“Unlike New York, I have the opportunity to do two wonderful things here,” she continues. “I have space to paint. My easel is no longer residing in my living room overlooking Central Park.” (She now has a proper studio.) “And I’m able to indulge in my passion for my landscape. The moment May arrives, I have to be in Maine to see the first sedum poke out of the ground and watch the ferns start to uncurl. I can’t be pushed away from here until October.”

McDonald also loves her house for two major events she holds every year. One is a garden party in August when her Asiatic lilies bloom, when she hosts “probably 200 people of all ages.” Then there is a Christmas Eve party where fires blaze in the various fireplaces and 75 people circulate through the maze of rooms. Arguably, that is when the house is at its best. “It’s almost like the house says, ‘Come in,’” believes McDonald. “It’s like an embrace.” 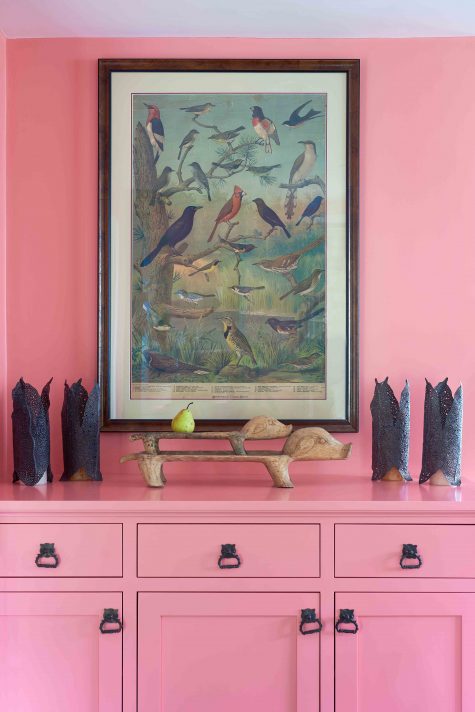 McDonald deployed a salmon accent color in a corner cabinet, where it serves as a backdrop for an Audubon print of birds. 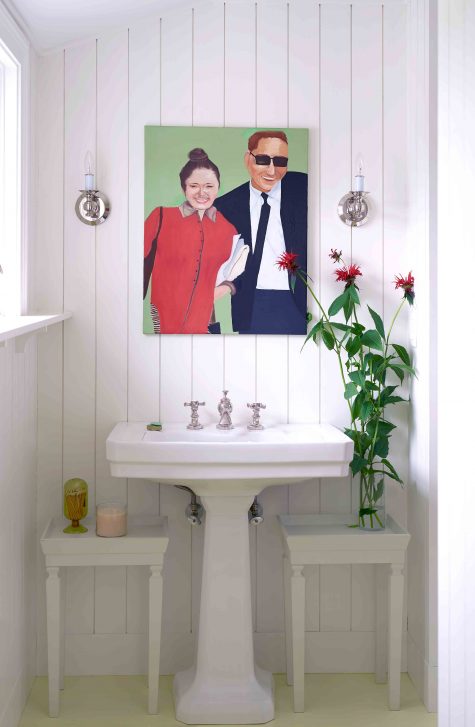 In one of the baths another painting by McDonald presides over a pedestal sink against shiplap siding.