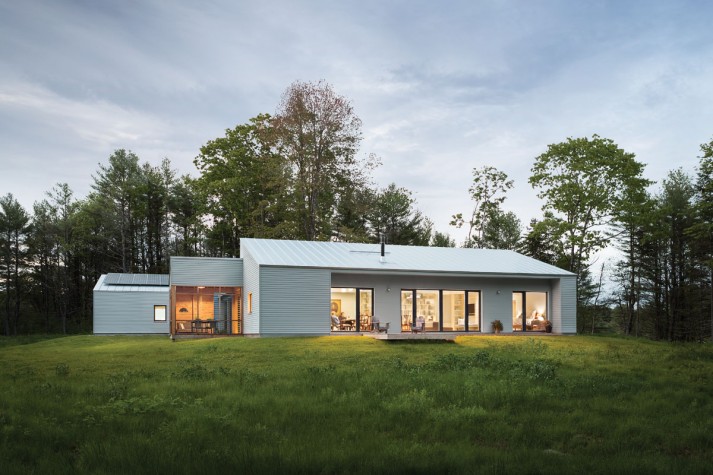 The long horizontal of the Walsh home is a purposeful contrast to the vertical of the surrounding trees. From left to right, the home’s three shed forms comprise the garage with its photovoltaic panels, the screened porch, and the main house with great room and bedroom, visible through the glass doors. 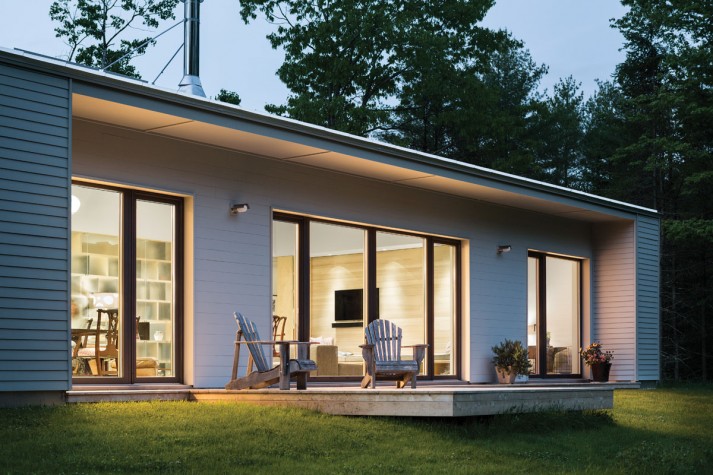 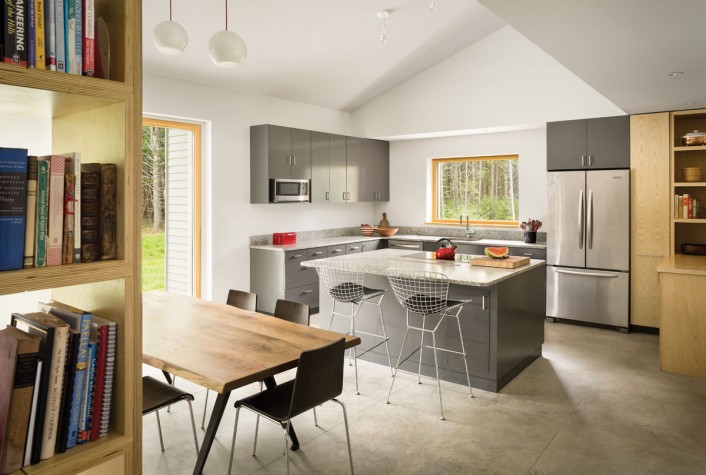 The design plans called for kitchen cabinets from IKEA. The Walshes went to Massachusetts and picked out gray metal cabinets from the store, but midway through the project, they discovered that, for just a bit more money, they could substitute custom wood cabinets from North Yarmouth carpenter and friend David Sprague. The cabinets are finished with a high gloss gray paint. The floor—a concrete to which dye has been added—was installed by Day’s Concrete Floors in North Monmouth. The live edge wood table in the foreground is from District Eight Design in Vietnam. The Bertoli kitchen stools were chosen, in part, for the way the mesh disappears when you look at the island, which is topped with granite from Freshwater Stone in Orland. 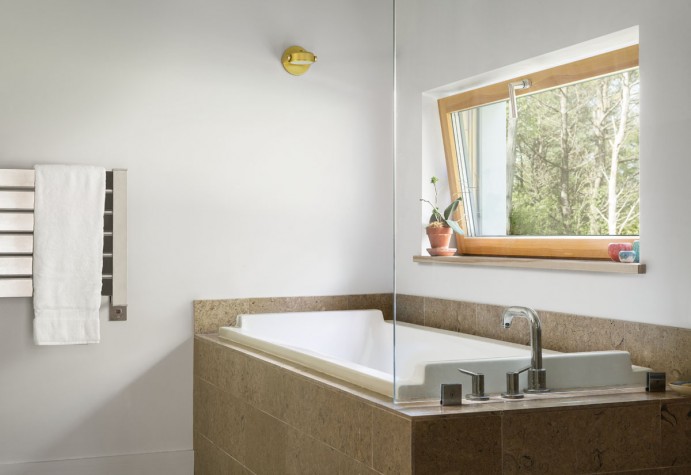 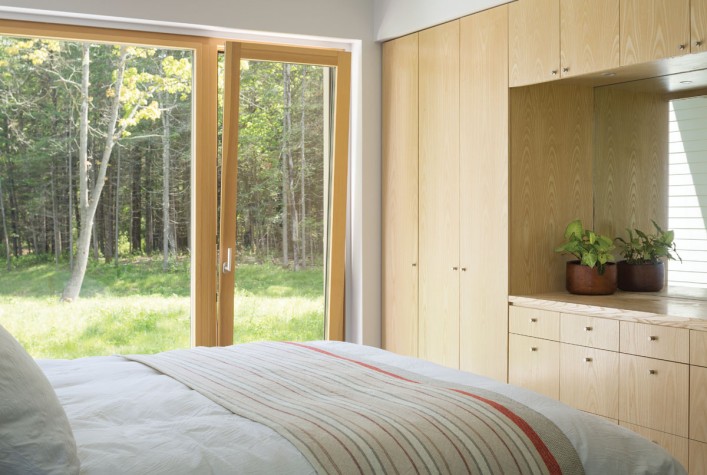 The owners conserved space in the bedroom with built-in ash hanging closets and drawers, custom made by Sprague. 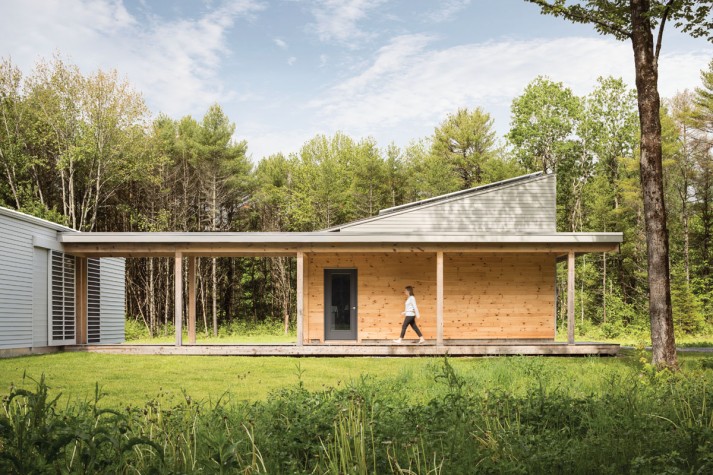 A walkway leads past the pine wall of the garage to the slatted front doors of the home. 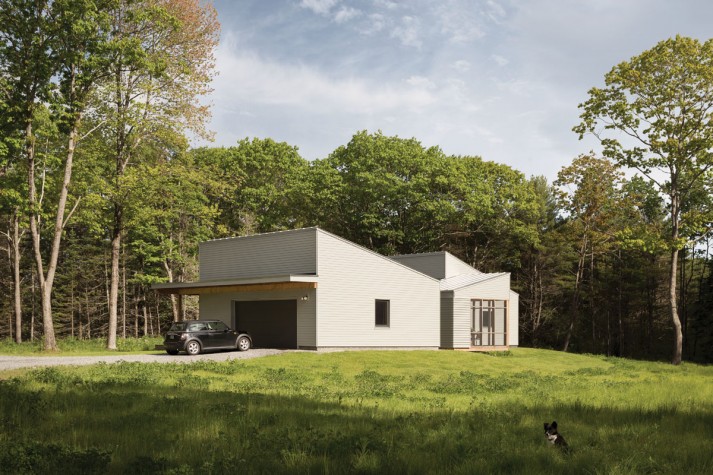 When Ellen Walsh and her maritime-lawyer husband, Nico, decided to downsize from the Yarmouth home in which they’d raised their three children, she thought, “Here is an opportunity to put into practice what I’ve been teaching for years.” Currently an elementary school science teacher in Falmouth, Ellen has been involved in environmental education since the 1980s.

She and her husband, both ardent naturalists, wanted their new home to be eco-friendly. They first became aware of GO Logic, a Belfast design-build firm devoted to high-performance building, by reading this magazine: one of GO Logic’s signature designs, the GO Home—a red two-story and recipient of many awards, including the U.S. Green Building Council’s 2012 residential project of the year—was featured on MH+D’s cover in March 2011. Not long after, the Walshes went to the Common Ground Fair, where GO Logic had a booth, and they began talking.

From the outside, the Walsh home reads as three box forms—the house, the screen porch, and the garage—each with a shed roof that slopes in the opposite direction from its neighbor. The rooflines are a nod, says architect Gunther Kragler, to the traditional volumes and shapes of the Maine built landscape. In Kragler’s and GO builder Alan Gibson’s iteration, however, Maine vernacular is a feature of an otherwise contemporary house with design influences that include midcentury modern, Scandinavian, and Japanese.

One arrives at the Walsh house by stepping into the driveway then crossing a covered walkway that leads from the garage to a sliding door of slatted wood. The heavy door rolls open to reveal a post-and-beam screened porch that serves as mudroom in the cold weather and as extension of the house (and protection from mosquitoes) in the warm. Inside the house, the south-facing central space is a vaulted rectangular room, whose wall of windows overlooks a pine forest that screens the Cousins River. There’s an open kitchen at one end of the room and an ash accent wall with a TV and built-in daybed at the other. In between is the dining room/ living room space, which is separated from the corridor that leads to the three bedrooms and bath by a two-sided, wall-sized bookcase of wood, steel, and glass. A beautiful fourth wall for the room, it is, as Nico says, “one of the most innovative features of the house.” With the exception of a single double- sided display shelf with pocket LED lighting, the bookcase is open on the corridor side and enclosed in translucent, acid-etched glass on the living- room side. The result, from the living-room side, is a wall of light, which itself suggests an art object, and behind which one glimpses the ghosts of the items stored on the shelves. From the corridor side, there is the pleasure of easy access to cookbooks, reading material, and family treasures.

GO Logic’s focus on high performance means the firm is “always energy modeling buildings to see how houses perform for their specific design and context,” says Kragler. To illustrate this, he describes the Passive House standard to which GO Logic holds its buildings. At first, the phrase confuses me, and I imagine he is only talking about what I can readily see when I visit the Walsh house: It has big windows on the south side and small on the north, so it can take advantage of solar gain in the winter and, because of the large roof overhangs, still stay cool in the summer. I notice, too, south- facing photovoltaic panels on the garage roof, so I recognize that the house must be actively as well as passively solar. Turns out, I only have a small part of the energy picture. I have made a common enough mistake, Kragler explains. I am thinking of “passive solar design,” an idea that developed in the ’60s and ’70s as a low-tech way of approaching a building— for example, siting a house to face the south to get solar gain. What Kragler is talking about is different: the “Passivhaus” standard that developed in Germany in the ’90s and includes up to an 80 percent improvement on energy needs compared to a house built to standard code.

A Passive House requires a very small amount of energy for heating, cooling, water heating, appliances, and other loads. With the addition of a few solar panels the house can become net-zero for annual energy use. To do this, GO Logic looks at a building holistically, creating a superinsulated envelope, including foundation, walls, and roof; an airtight building shell, including triple- glazed windows; and a heat recovery ventilation system that operates 24/7 to refresh the air in the house while capturing the heat from departing air. The finished floor of the home is also the concrete foundation, which, as Kragler says, is “integral to the performance of the house, as the floor is a significant thermal mass, absorbing solar gain during winter days and radiating that heat back out on cold nights.” Beyond this, the house has minimal heating and no cooling system. The Walshes have electric baseboard heat. Their photovoltaic panels give most of the energy they make back to the grid, which Central Maine Power stores as credit until the Walshes need it. Last year, the couple spent $500 on their electric bill and a minimal amount on wood, for when they wanted to use the wood-burning stove for ambient heat. The house has two 40-gallon water heaters. The Walshes use one when they are alone and turn the second on when they have guests.

Standing on concrete while preparing your morning coffee might not sound appealing, but, in fact, everything that is done for practical reasons at the Cousins River house is also done for beauty. GO Logic swirled the floor concrete with a dye that creates a mottled limestone effect and adds warmth and character to the house, while keeping with the modern aesthetic. The one-floor construction and relatively small footprint of the house makes energy sense but also allows for artful options for compressing space as with custom built- ins in the kitchen (which include a desk/nook where Ellen grades papers) and bedrooms, which have built-in custom closet walls.

Outside, the length of the house creates horizontal lines that are accented by the horizontal slats of wood that form the screen- door entry and interplay with the vertical pine trees that surround the large clearing where the house is sited. Originally, the Walshes were attracted to red as a color for the house, which is finished in fiber cement siding that is applied in a combination of overlapping clapboard, clapboard laid flat, and horizontal batten. When the siding was primed, however, the Walshes liked the pale gray color, which looked to them like a suede shoe, lighter and darker in some places. They picked a paint to match the primer, and now the house seems just right in the context, harmonizing with the green and other earth tones in the immediate environment. It’s more “like a boulder,” Kragler says, than the red barn the Walshes had previously imagined they wanted.

Because the aesthetic is so streamlined, the Walshes didn’t want to clutter their grounds. They have a three-foot-wide porch strip that bumps out into a full patio in front of the living room, but there are no plantings. A Japanese garden may someday surround and run under the walkway, but for now the forms of the buildings and nature predominate.

The interior ranges from midcentury modern to contemporary, with a sleek modular gray sofa with rectangular block cushions that can be arranged to create sofas that face each other or in opposing directions. What serves as the back of one couch can also serve as a tabletop for another. White pendant lights hang down on red cords by the dining table, Bertoli-style stools are pulled up to the kitchen counter, and the neutral palette is brightened with Scandinavian-inspired pillows from Tröskö Design in Yarmouth.

“The theme of the house is natural history,” Nico says, and while that is evident from the bookcase, where Euell Gibbons’s Stalking the Wild Asparagus sits next to Sibley bird books, it also is suggested by the shower, which has a frieze composed of tiles imprinted with fish fossils from stone quarried in Wyoming.

“What most people feel when they come here is the woods and the outdoors,” says Ellen. “They feel in the midst of the outdoors even when they are inside.” Both Ellen and Nico comment, and at separate times, that they love to be in the house during a blizzard when the snow is swirling about and filling up their meadow. “It’s mesmerizing,” says Ellen. “There’s a serenity to it I like, especially after a day with fifth graders.” 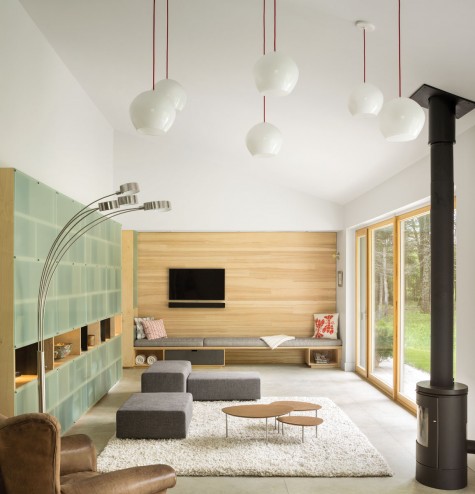 The living room has an ash accent wall and daybed at back and a double- sided bookcase at left. The shelves are covered with acid-etched glass, through which light filters, creating different effects over the course of the day. The Living Divani gray modular sofa, Tech Lighting pendants, egg-shaped nesting tables, and nubbly rug contribute to the midcentury modern aesthetic. 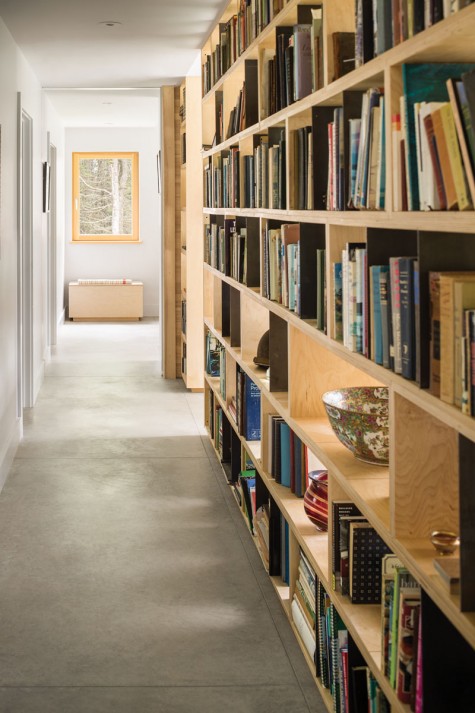 The corridor showcases the double-sided bookcase that also forms one of the living room’s walls. Two small bedrooms and a bathroom are off to the left. The owners’ bedroom is at the end of the corridor. 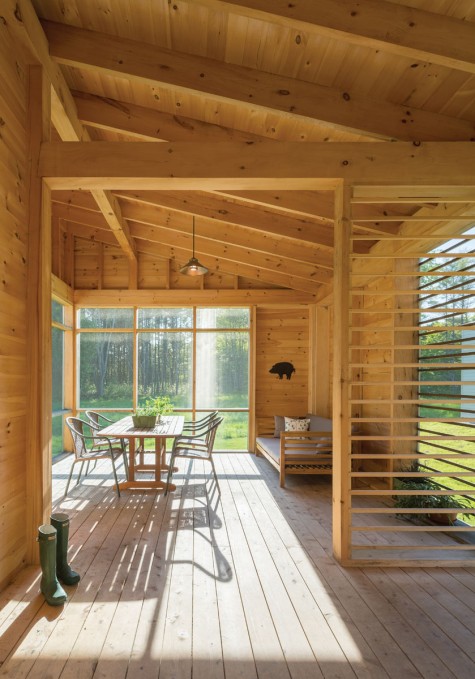 The pine post-and-beam screened porch serves as an extension of the house in warmer months. The floor is Port Orford cedar. The slatted open wall references the slats of the entry door and were added to “help define the walkway into the porch and subtly separate the seating area while maintaining an open feeling,” says architect Gunther Kragler. 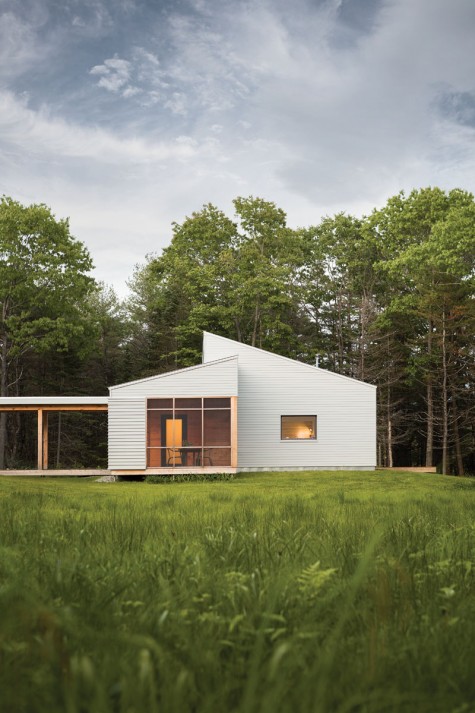 Although the house is modern, the shed roofs reference Maine vernacular forms. The Walshes opted out of foundation plantings in order to create the crisp look of a house in a meadow. “The feel of the house is very clean inside and outside,” says Ellen Walsh.