Beacon on the Harbor 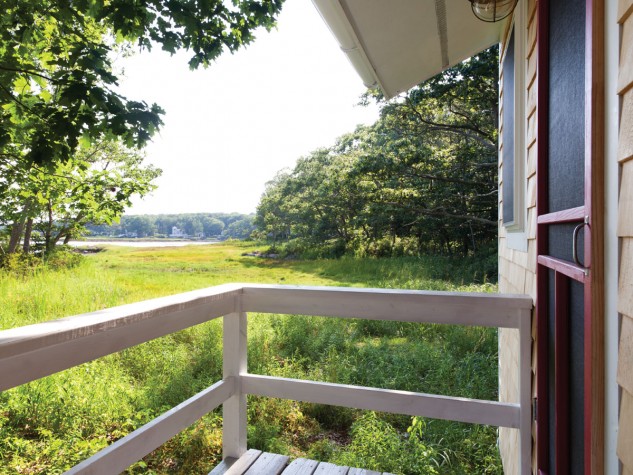 The deck on an outbuilding the couple is renovating overlooks a marsh that segues into Paddy Creek. 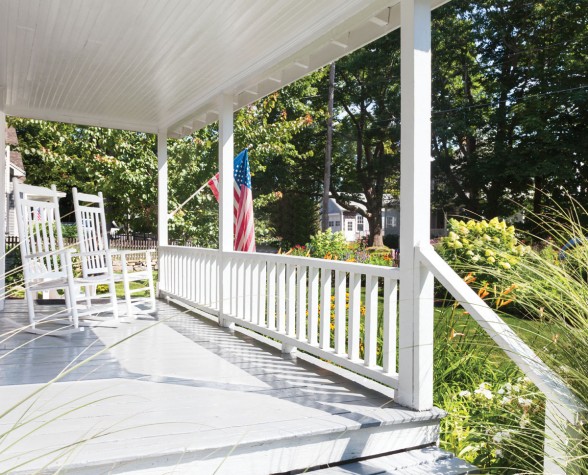 This is the best spot in the house,” says Glaser of the front porch, where the couple sip coffee on rockers he painted and watch the sunrise over Cape Porpoise Harbor across the street. 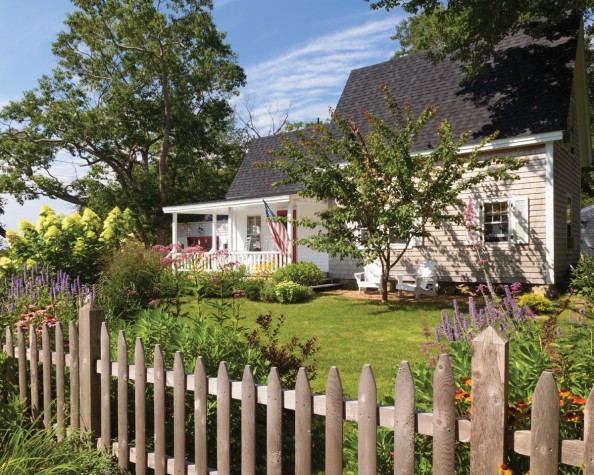 The previous owner was an avid gardener, and Mike Spenard and Brian Glaser have been reconfiguring and expanding on her beds, which burgeon with Agastache, baptisia, black-eyed Susans, catmint, echinacea, helenium, ‘Limelight’ hydrangea, joe-pye weed, Montauk daisies, sedum, and weigela. 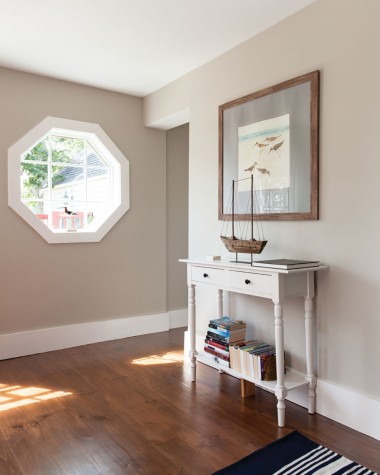 Benjamin Moore’s Revere Pewter brings a touch of formality to the living room. 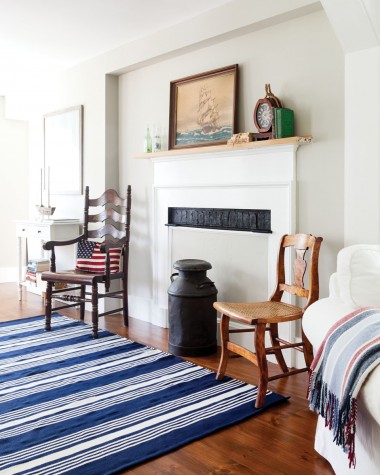 The fireplace side of the living room features a pair of flea market chairs, as well as a black-painted urn and a seascape from Canal Street Antique Mall in Lawrence, Massachusetts. 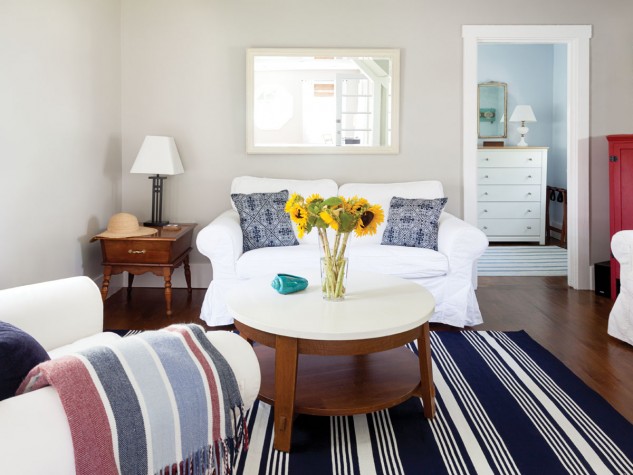 A week after the couple closed on the home, a burst pipe on the second floor necessitated the gutting of the living room and guest room beyond, which received new drywall, trim, and stained pine flooring. The slipcovered sofa and chairs are from IKEA; the end table is a flea market find. 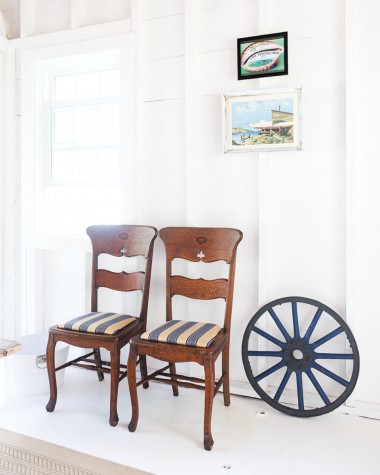 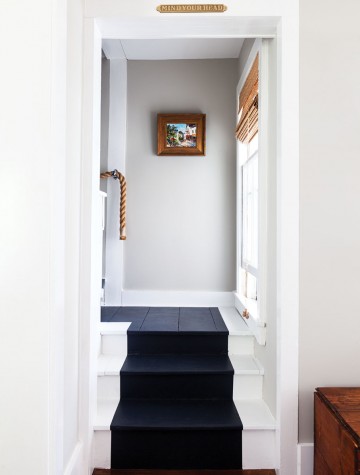 The stairs are painted white with a charcoal “runner”—a near-nautical combination that complements the navy and white striped rugs in the living room and the hemp rope railing from Knot and Rope Supply. 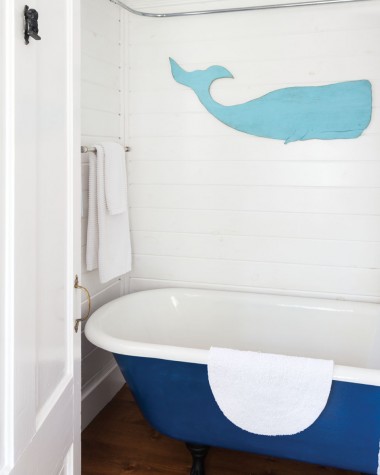 Glaser painted the claw-foot tub in the guest bathroom Rust-Oleum’s Royal Blue; the wooden whale is from Etsy. 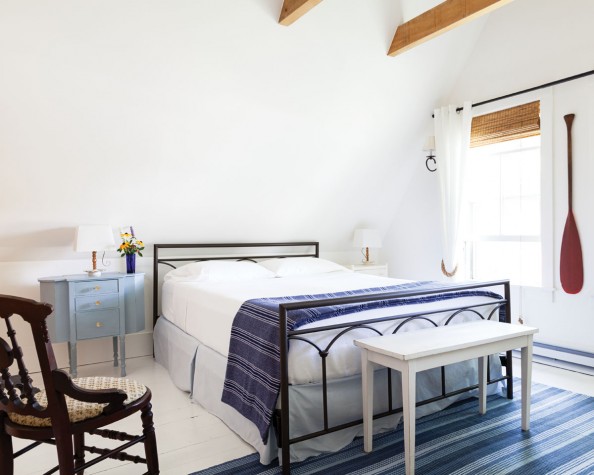 Upstairs, the couple created a spacious owners’ suite with a closet where a tiny bathroom used to be and a new bathroom in a former guestroom across the hall. They whitewashed the bedroom walls and planned to paint the floor gray- blue, but after putting the primer on “we fell in love with the clean simplicity of all white,” says Spenard. Glaser painted the Martha Washington sewing cabinet Louis Blue by Annie Sloan and the antique piano bench Decorator’s White by Benjamin Moore.

In Cape Porpoise, a cottage for a couple and a community of enchanted guests

On a narrow road that curves around Cape Porpoise Harbor in Kennebunkport, visitors from near and far find their muse. The cries of seagulls fill the air / As we settle back in the porch rocking chars / And spend our precious vacations days / Enveloped in a kind of Cape Porpoise haze, wrote a Massachusetts dweller in a 32-line poem penned in Mike Spenard and Brian Glaser’s guestbook. On another page, an Ottawa family turned the name of the couple’s road into an acrostic, composing a phrase for each letter in Langsford. And another Massachusetts resident reflected, “May in Cape Porpoise heralds new awakenings…Baby geese swimming…The buds on the trees transforming into vibrant flowers and the iris unfolding. The tide going in and out every day reminded us of the glory and power of nature.” “People try to outdo each other—it’s amazing,” says Spenard, who rents out the cottage he owns with his husband, Glaser, for part of the year. Adds Glaser: “The overwhelming theme of all the remarks is that there’s something so special and relaxing about this place. It takes you away.”

When the Massachusetts couple first visited the property in December of 2011 they experienced a different sort of “Cape Porpoise haze”—the kind accompanied by steady drizzle and bone-chilling cold. “Initially I was just captivated by the house and had no appreciation for how beautiful it would be here when it wasn’t miserable out,” says Glaser. But Spenard, who had spent many summer vacations in the area, envisioned “coffee on the front porch” while watching the sunrise over the lobster boats on the pinned harbor across the street. In the afternoons, they might purchase some of the day’s catch at the Langsford Road Lobster and Fish House, perched on pilings in the water, kitty-corner to the cottage. The couple had been visiting friends during Kennebunkport’s famed Christmas Prelude celebration when one of them suggested they check out a 1920 shingled Cape for sale. “We’d been toying with the idea of having a summerhouse, but we weren’t sure where,” says Glaser. “We hadn’t looked at anything up here, nor did we look at anything else after we saw this place. We knew we could make it what we wanted.”

The first contractor they asked to consult on renovations had a different opinion. “He said, ‘If I had this, I’d probably tear it down,’” says Spenard. “But that wasn’t an option. We loved how it was this rambling, quirky little house.” Quirkiness, of course, often comes with surprises, and the couple got a big one a week after the closing, when a burst pipe on the second floor necessitated a gutting of most of the original, front part of the cottage. “There were so many cracks in the old pine floors that the water just flowed through to the crawlspace under the house,” says Glaser. “It was a disaster but also a blessing because it allowed us to change things we would have put up with otherwise.” Working with Sanford builder Chris Powers, they removed a giant “clangy, leaky” oil furnace in the rear dining-office area, freeing up space for a washer and dryer. The accompanying rusty baseboard registers also came out, replaced with a pair of efficient Rinnai propane units. The downstairs living room and guestroom received new drywall and stained pine flooring. Upstairs, Powers created a spacious owners’ suite with a closet where a tiny bathroom used to be and a new bathroom in a former guestroom across the hall.

Phase two of the renovations, overseen by Arundel contractor Robert Zuke, focused on the galley kitchen and the adjoining rear dining area and carriage house. To create more counter space and a buffer between the kitchen and dining area, situated down a short flight of stairs, the couple installed a long maple island punctuated with cherry-red stools. On the dining room side, a banquette built into the island wall forms the basis of a breakfast nook. Walling off a doorway between the kitchen and carriage house allowed for rows of open shelving separated by a smaller maple countertop. The previous owner had started reinventing the carriage house, accessed through the addition, with a large French door trimmed with a fanlight and sidelights that opens onto the marsh on the southeast side of the home. The elegant backdrop inspired the couple to turn the space into a seasonal dining room, with a sisal rug and distressed farm table set atop the painted cement floor and a curvaceous metal chandelier suspended from the exposed timbers. Open carriage doors frame the lively street, creating the effect of a sidewalk café.

Spenard and Glaser painted the entire house themselves, transforming the knotty pine walls in the kitchen-dining- office area, downstairs bathroom, carriage house, and owners’ bedroom with Decorator’s White by Benjamin Moore. The same bright, clean color appears on the floors in the latter two spheres, on the Sheetrock in the owners’ bathroom, and on all of the trim and painted ceilings. Revere Pewter gives the living room and stairway a slightly more formal feel. In the guestroom, white linens pop against pale blue walls (the couple mixed the color themselves), like clouds in a light-filled sky. “When we’re here, we putz,” jokes Spenard, who handles all of the brushwork; Glaser is the paint-roller in the relationship.

Glaser also finished (and sometimes refinished) most of the other painted surfaces in the home. The stairs were royal blue before he made them white with a charcoal “runner”—a near-nautical combination that complements the navy and white striped rugs in the living room and a hemp rope railing he installed with brackets. The vintage jelly cabinet in the living room was seafoam green before he coated it in Emperor’s Silk, a vivid red from the Annie Sloan Chalk Paint collection that has a velvety matte finish. And the antique school desk by the front door was white before he painted it (and the chandelier over the dining table) Graphite, another Annie Sloan shade. “I love finding sad, old, neglected pieces with character and making them the proud focal point of a room with beautiful colors,” says Glaser. “But you have to get those colors right.” As for all that painting? “Mike gets tired of it, but I never do. I always have a project going.”

Other colors were spot-on from the start, including Benjamin Moore’s Shy Cherry (an oxymoron if ever there was one) on the exterior doors, Rust-Oleum’s Royal Blue on the claw-foot tub in the downstairs bathroom, and Annie Sloan’s green-blue Duck Egg and pastel Louis Blue on the nightstands in the guest and owners’ bedrooms. The couple shops for most of their furnishings at antiques stores, flea markets, and on Craigslist—sometimes competitively. When they spotted their dining room table, composed of an old slatted door atop a carved wood base, at Cattail Farm Antiques in Wells, “we loved it and noticed these other two guys were eyeing it too,” says Spenard. “So we ran downstairs to the cashier and said, ‘We’ll take it!’ By the time they arrived, we were signing the credit card statement.”

The couple spends several weeks between spring and fall at the cottage, kayaking, biking, weekend warrioring, and dining with friends. Someday, they hope to retire here. In the meantime, “we feel happy that the house is lived in, all season long, by people who appreciate it like we do,” says Spenard—people, perhaps, like you. 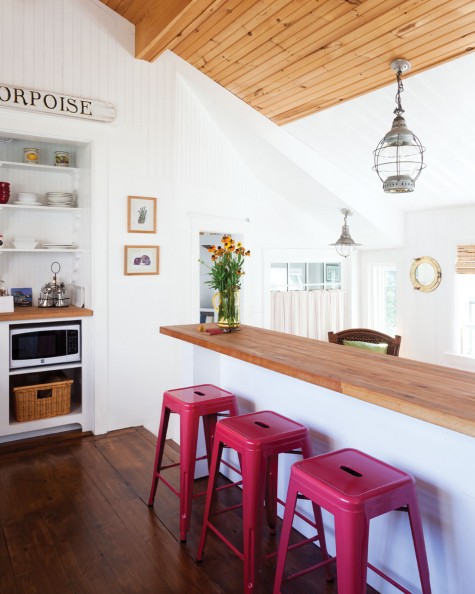 To create more counter space and a buffer between the kitchen and dining area, situated down a short flight of stairs, the couple installed a long maple island punctuated with cherry-red stools. Walling off a doorway between the kitchen and adjoining carriage house allowed for rows of open shelving separated by a smaller maple countertop. 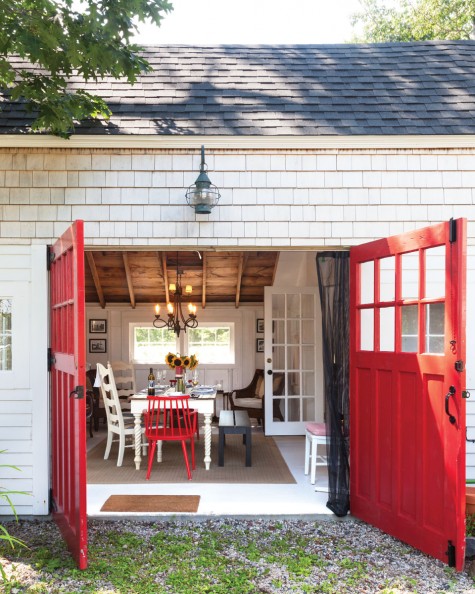 The dining room’s carriage doors open toward the lively street, creating the effect of a sidewalk café. The table, composed of an old slatted door atop a carved wood base, is from Cattail Farm Antiques in Wells. Glaser found the ladder-back chairs on Craigslist and painted them Old White by Annie Sloan; he painted the existing chandelier Graphite. 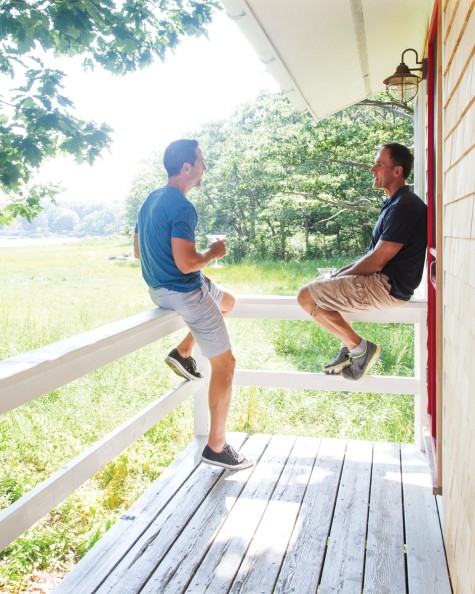 Glaser and Spenard await the sunset over the marsh, martinis in hand.