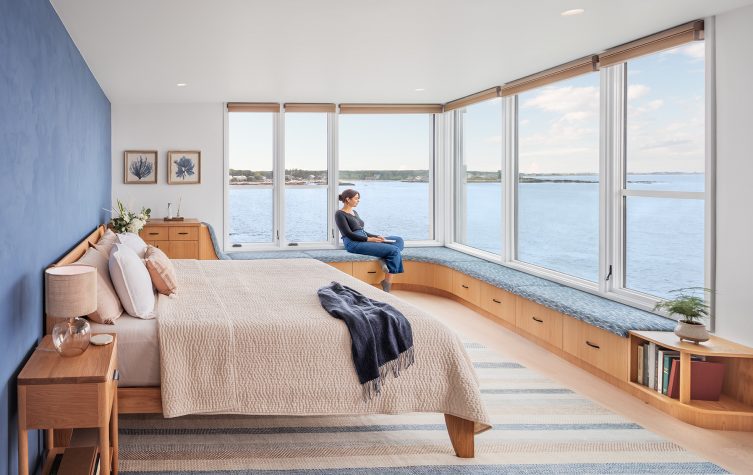 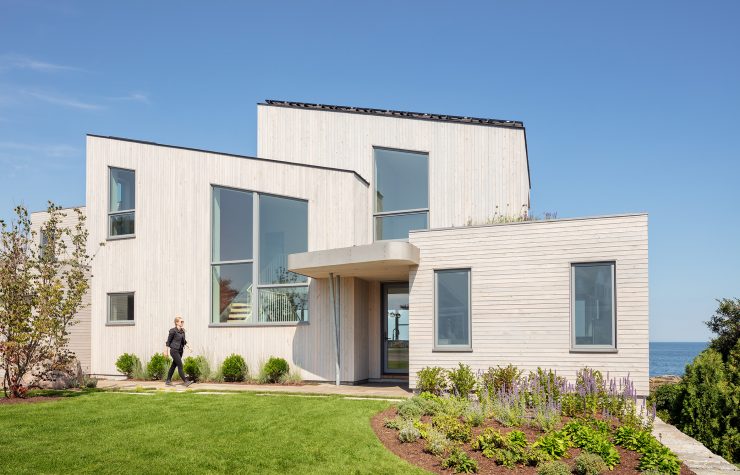 The homeowners worked with Jesse Thompson of Kaplan Thompson Architects and project manager Danielle Foisy to design a fully electric, net-zero-energy contemporary house using bird-safe glass throughout to replace the dilapidated 1970s home that previously stood on the site. 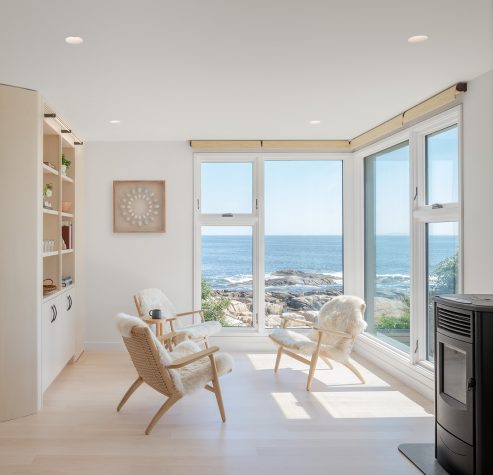 A sitting room off the kitchen provides a space for the clients to relax or cozy up to the pellet stove from Piazzetta; the chairs are from Carl Hansen and Søn. 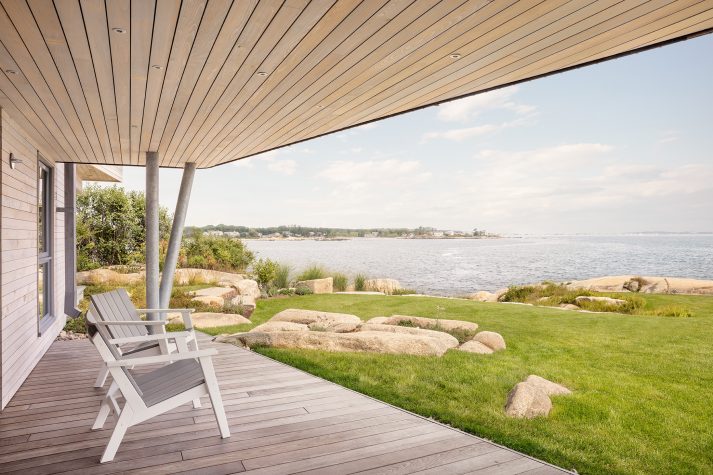 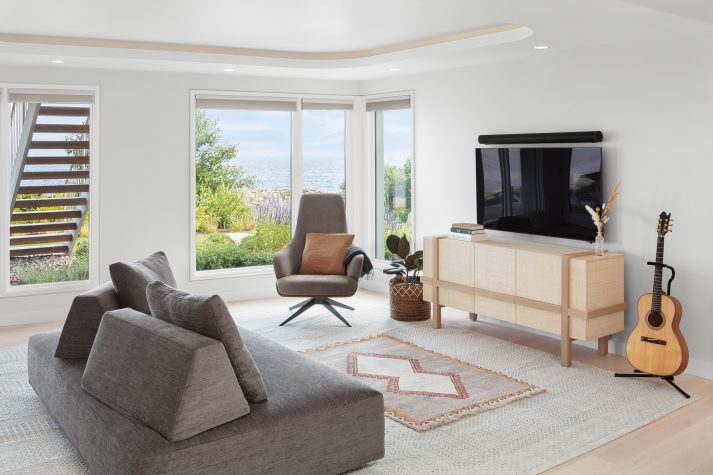 Music rises up through this atrium from the lower-level music room; the sofa is from Eilersen, the chair is from Casa Design Group, and the rugs are from First Rugs.

When the current owners of this house ﬁrst stumbled upon its oceanfront property in southern Maine, the site was enveloped in a thick fog that erased any sign of the sea. Despite not being able to lay eyes on the view, the couple—who had pulled their car over after spotting a “for sale” sign—sensed that there might be something special here. “We could hear more waves than we could see, and it was just magical,” recalls the husband. “We came back on a clear day to tour the house, and we fell in love with the 180-degree view of the water.” The original 1970s residence, on the other hand, was much less impressive. “We were all hoping to save the original home, but it had been closed up for a while and wasn’t particularly safe,” explains architect Jesse Thompson of the Portland ﬁrm Kaplan Thompson Architects, citing mold and large cracks in the foundation. The couple, who had never built a house before, took full advantage of the situation and decided on a fully electric, net-zero-energy contemporary structure. “We wanted a home that would make the most of the views and the light,” says the wife.

Thompson set out to conceive a three-level, 3,900-square-foot four-bedroom manse on the same footprint as the original residence. “It’s always easier to use the existing legal footprint,” explains the architect, who even took a design cue from the 1970s abode. “From the street, the original house looked like a quiet, one-story residence. The ocean side, however, was quite tall and special. We wanted to bring that feeling into the new design.” Indeed, the rear facade features large expanses of glazing continuing down to the walk-out lower level, which contains a music room, a bedroom, a bathroom, and a laundry room. “To bring additional light into the lower level, we created a three-story atrium illuminated by windows on the front facade,” says Thompson. “That ﬂoor doesn’t feel at all like a basement.”

On the main level, the priority was maintaining an easy ﬂow. “The kitchen, living area, and dining area are open to one another,” says Thompson. “These clients were not looking for formal spaces. There is a sitting room off the kitchen that’s a bit more enclosed, which makes it feel different from the rest of the house. It serves as a cozy place to play a board game together or sit by the woodstove.” This room has become a favorite with the homeowners. “Sometimes I curl up there to get away from the hugeness of the water view in the main living room,” says the wife. When a nor’easter is whipping through, for example, “the waves might get to be too much,” adds the husband. “This room is quiet and less exposed.” On calmer days, two balconies provide access to the outdoors: one off the main living area and the other accessed via the primary bedroom on the upper level. “Standing on the upper balcony is like being in a bird’s nest,” notes the architect. In the bedroom, two walls of windows converge at a sharp angle overlooking the sea, “recalling the prow of a boat,” says the husband.

Given this comparison to a boat, it’s no surprise that the residence was constructed with the same care. “Constructing this house was basically like constructing a boat,” says Chris Shomphe of Bowley Builders. “A major consideration with a project like this is the hammering the structure will receive during non-summer months.” The wind can take a heavy toll, so Kaplan Thompson designed this structure for its environment, specifying a rugged double-wall system, an exterior rain screen, and inset triple-glazed windows. When you’re inside, you can’t even hear the ocean. “It feels like you’re in a submarine,” says Shomphe. There are plenty of other bells and whistles that keep the net-zero property running smoothly, including extensive waterprooﬁng, a complete solar array, motorized exterior blinds to limit heat retention, air-source heat pumps for efficient heating and cooling, electric radiant ﬂooring, and a Tesla Powerwall solar-power backup battery.

Another unexpected touch is the addition of two green roof panels, which can be seen from a few different vantage points both inside and out. “They have a mix of bulbs, perennials, and ﬂowering plants that can withstand extreme cold, heat, and wind, and the palette draws on that of the surrounding site,” explains landscape designer Soren deNiord, who worked with Thompson on the overall site plan, from troubleshoot-ing septic and drainage issues to grading the property (there’s approximately a 20-foot difference in elevation from the road down to the shore rocks). “The house sits well within the landscape. We added stone walls and a terracing system in an effort to gain more usable outdoor space. And the property can be ADA accessible down the line, too.” It was critical that deNiord was on-site from the very beginning of the project. “It was nice to experience the original structure,” he recalls. “We were able to test sight lines and elevations to see what was and wasn’t working. Because there is so much glazing, we added lighting to animate the site at night and draw the eye outside.” To complement the sleek architecture, deNiord conceived a minimalist, low-maintenance planting scheme that includes “sweeps of color and texture that reﬂect the architectural massings.” DeNiord used as many local materials as possible, such as granite boulders and pavers that jibe with the coastline’s pinkish-tan ledge. “Sometimes creating a clean, modern design is more challenging because of the editing process,” he continues. “We ended up removing some invasive species and introduced native plantings along with some perennial color.”

“It’s almost as if the building is growing out of those rocks.”

With the site and structure buttoned up, it was time for interior designer Rachel McBrien of Kaplan Thompson to work her magic. “We were going for a contemporary, clean-lined aesthetic, but not so far on the minimalist spectrum that it’s uncomfortable,” says McBrien. “Striking the right balance was key. There are frameless white doors, but they are warmed up with bronze hardware. Often we will match the angular quality of the exterior architecture, but we chose to go with softer curves for this particular project.” The kitchen’s custom Block Brothers cabinetry, for example, incorporates rounded edges and a sinuous island. The curves extend to the three-story terracotta- colored limewashed wall that conceals the elevator. “We played with color and texture, making the interior and exterior feel harmonious,” says the designer. “Many of the interior tones are pulled from the site, such as the strong blue of the ocean and the pink and beige found in the shore rocks. The palette is earthy, natural, and calming.” A collection of rugs selected by the homeowners impacted the overall design scheme as well. “The clients chose the rugs before any of the other furnishings,” explains McBrien. “They really wanted the rugs to dictate the rest of the space.” Once those were locked in, McBrien selected streamlined contemporary furnishings to complement the textiles. All in all, notes Thompson, “the home is light, open, and airy without feeling stark.” Even the exterior cedar siding has a subtle stain that recalls the shade of the rocks and enforces the seamlessness between inside and out. “It’s almost as if the building is growing out of those rocks,” he continues. “It’s a dramatic house, but its tones are gentle.” 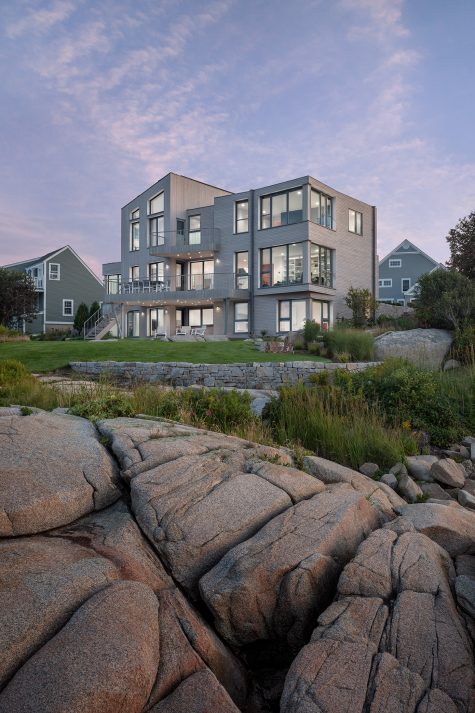 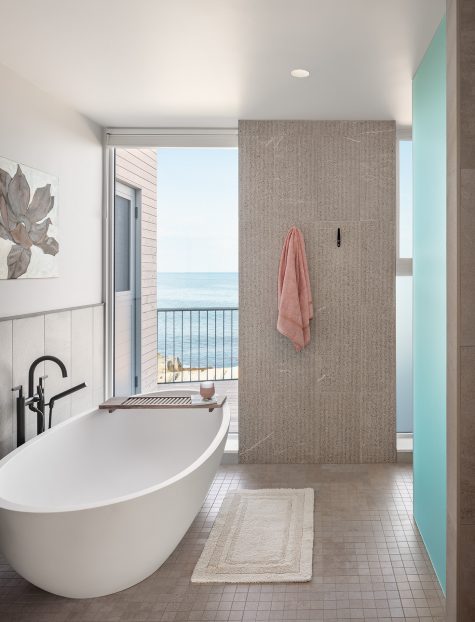 The primary bathroom contains a tub from Agape, artwork by Kathy Lo, and tile from both Waterworks and Porcelanosa. 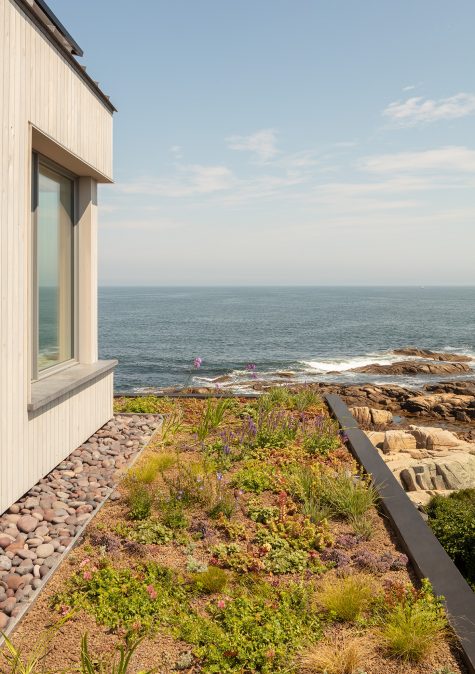 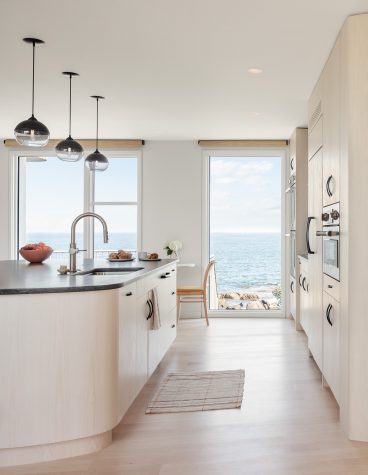 Block Brothers fabricated the sleek ash cabinetry in the kitchen; the pendants are from Hennepin Made. 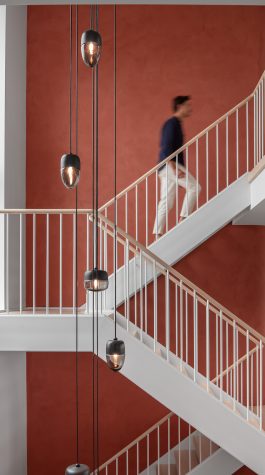 A custom chandelier by Hennepin Made hangs in the three-level stairwell atrium, which features a custom limewash treatment from Portola Paints and Glazes. 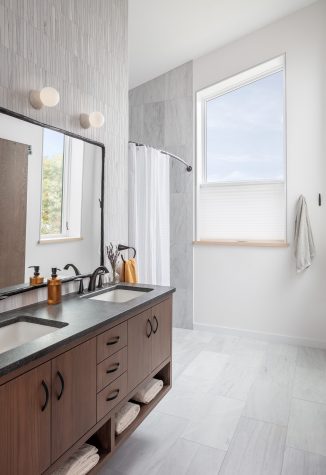 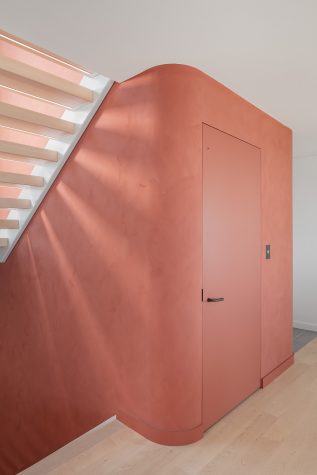 A door adjacent to the stairwell leads to the elevator.