An Elegant Gabled Residence That Blends Home Comforts with the Outdoors 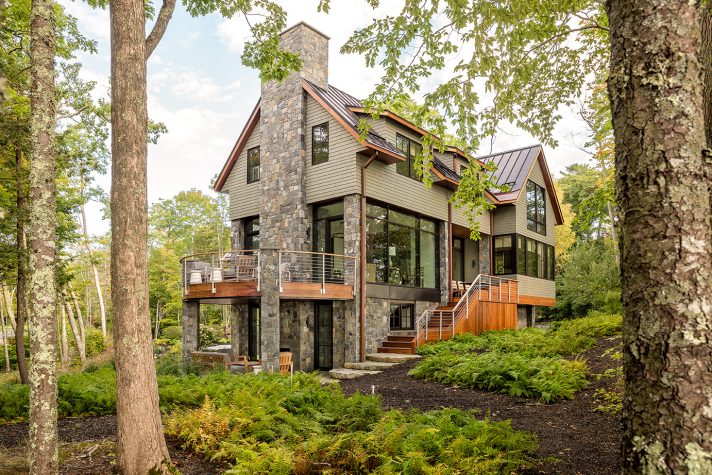 Rich brown sapele, a mahogany-like wood more often used in furniture making and boatbuilding, brings warmth and continuity to the home’s exterior. A rounded balcony makes maximal use of the buildable footprint; underneath, an exterior fireplace creates a cozy, sheltered seating area. 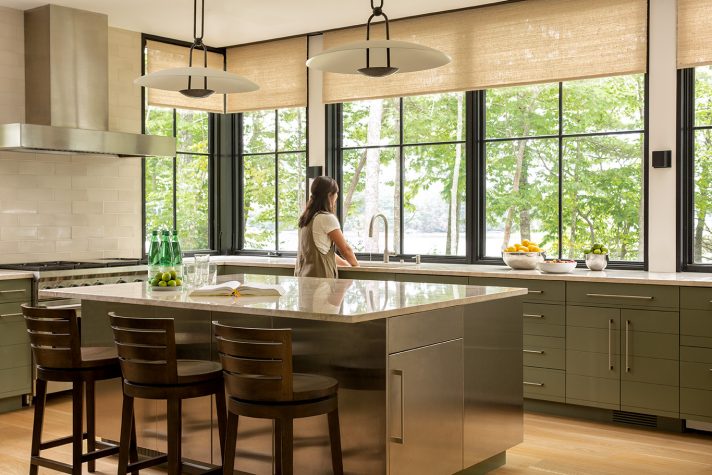 In the kitchen, a stainless steel island contrasts with the natural materials and tones used throughout the home, including handwoven grass shades and muted green shiplap. 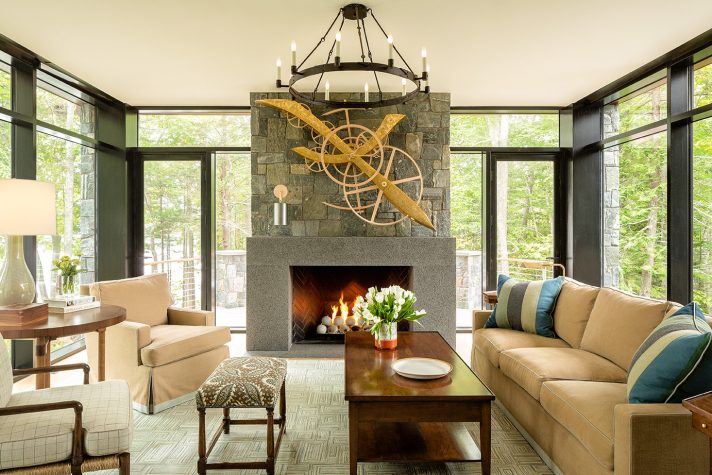 Perhaps the most prominent feature in the home is a sculptural clock hand carved by Michigan clockwright Rick Hale, which, the owner says, “took as long to make as the house”; the fireplace was designed to protrude to the same depth as the clock, which provides a focal point for the living room and is visible from the outside through the home’s extensive windows. 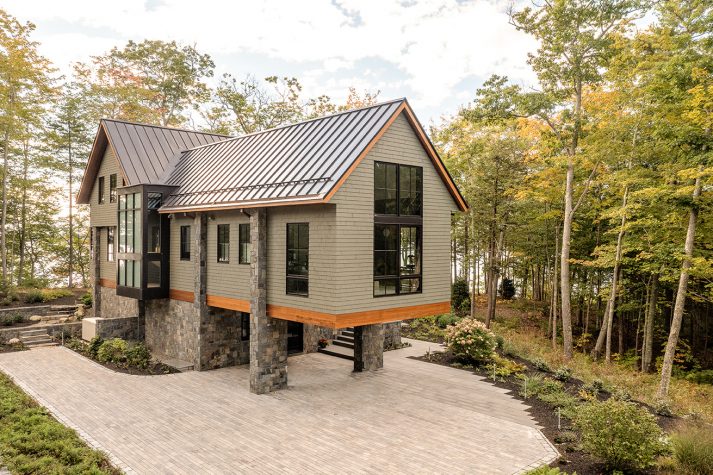 A dramatic cantilever that holds a guest suite creates a carport below. 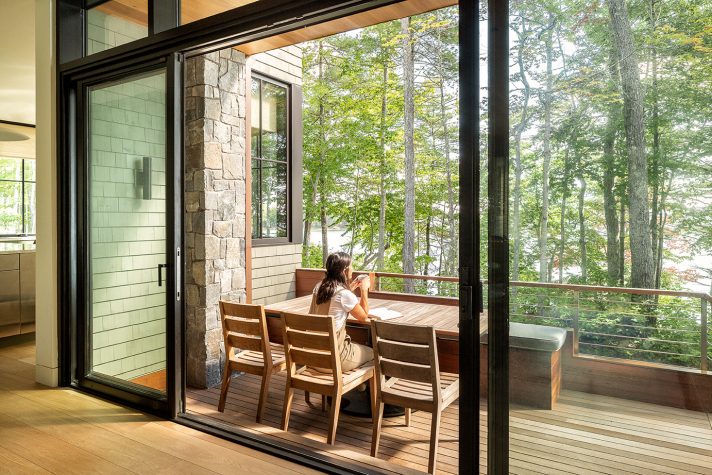 A seating area off the great room looks out over the water, extending the dining area into the outdoors. 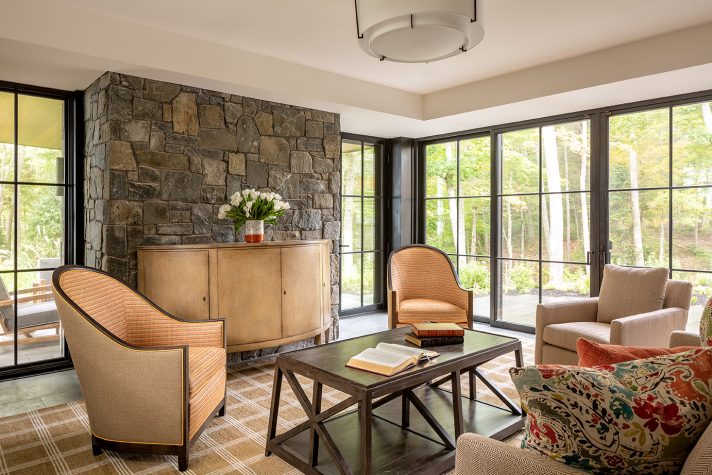 The lower-level family room merges indoor comfort with all-around views of the outdoors; glass doors open onto the entry-side patio and the covered fireplace area. 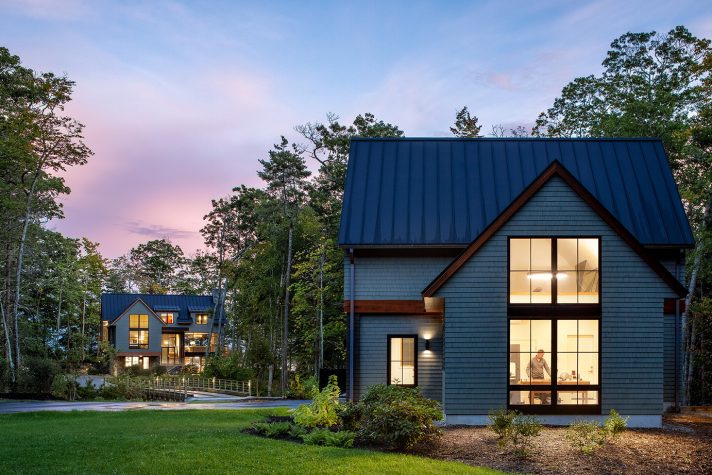 Constructing a road-worthy bridge across one of the site’s streams allowed the main house to be built as close to the shore as regulations allowed.

A few years ago, a Maryland-based couple started looking for a home in Maine. Their youngest daughter was living in Portland, newly married with a small baby; with three other daughters and a growing flock of grandchildren, they wanted a place where the family could come together by the water and where they could eventually retire. There were few such homes on the market, and not much buildable land. Finally, their realtor, Linda MacDonald, brought them to a waterfront lot in Freeport. It was a beautiful piece of property featuring streams, wetland, and old-growth forest at the shoreline—along with the building restrictions that come with each element. “It was challenging in the best sense,” says the owner. “We had a feeling that something special could be built here.”

Aware of the challenges, MacDonald called in a team of consultants to meet the prospective owners on-site. This group would become the core team of the build. Architect Kevin Browne sketched out some ideas, and the landscape architecture ﬁrm Terrence J. DeWan and Associates was commissioned to carry out a feasibility study. “We looked at the land, reviewed the rules and regulations, and came up with an answer that said, yes, we can do something here. We have these two slivers of buildable land that have been created by all these limiting factors,” recalls landscape architect Steve Thompson, who worked on the project with colleagues Amy Segal and David Truesdell. “It was an incredibly challenging property to develop, but not insurmountable. And the reason it wasn’t is because of the team.” Builder Matthew Brewer of M.R. Brewer describes the eventual site plan as “four major projects in one: a main house, a pool house, a bridge, and a granite-crib dock. Any one of those would have been a big project by itself.”

Working within the buildable slivers of land, Browne and his colleague Bonnie Wedster designed two buildings that mirror each other’s gabled forms across the decorative but highly functional road bridge that crosses one of the site’s streams. “The goal was to keep the form simple, similar to New England shingled forms, but to ﬁgure out how to do that and mix in an expansive number of windows,” says Browne of the main house. On the entry side of the home, they designed a light-ﬁlled foyer in the form of a “glass cube.” The foyer connects the living room wing, lined with glass curtain walls, to a guest room wing that extends over the driveway, forming a carport beneath. “That was one big design move,” says structural engineer Nate Merrill of Albert Putnam Associates. “It’s a pretty aggressive cantilever. And because it’s a ﬂoor over exterior space, we were mindful of not creating thermal bridges that would create cold spots in the ﬂoor above.” To that end, steel beams were positioned below the joists under each eave wall, then obscured in the soffit above the carport. On the water side of the ﬁrst ﬂoor, a smaller cantilever bumps out the kitchen and provides balance to the volume; it, too, features oversized windows.

“Coming across the bridge looking at the home, the main ﬂoor of the house looks almost like it’s ﬂoating,” says Brewer. That ethereal quality belies a very sturdy structure that took great care and strong materials to execute. “This wasn’t your ordinary wood-framed home. There’s a concrete foundation that’s elaborate and complex and, on top of that, a steel superstructure that supports the entire home. Around the steel structure, there’s conventional wood framing built off the steel frame. It’s built almost like a commercial building, in order to support the cantilever that you see when you pull into the driveway. There’s a lot of rebar in portions of that founda-tion.” But the aesthetic effect is far from commercial. “Since we were so conﬁned with the footprint, it ended up being a three-story house. We tried to use materials in a way that made it look not so tall,” says Wedster. “Having big windows in the living room makes it look almost like there’s no house there. That was part of it—making sure it was not an eyesore in the beautiful woods.”

The interior of the home similarly obscures technical systems to create a feeling of warmth and simplicity. The wife dislikes the blank black screens of TVs, so wooden cabinets contain the devices, which arise at the press of a button when needed. The complexity of the Lutron RadioRA lighting system appears in the bundles of wires in the mechanical room, but within the living spaces one sees only gentle recessed ceiling lights and a few dramatic pendants. Handwoven grass shades selected by interior designer Jay Jenkins of Baltimore-based Jenkins Baer Associates cover the living room windows, then retreat into recesses in the ceiling when not needed. Jenkins also chose to cover much of the entry and ﬁrst ﬂoor in muted green shiplap that extends to the peak of the stairway as well as across the refrigerator, freezer, and cabinets of the kitchen. Throughout the home, natural materials and images of wildlife harmonize with the views of woods, stone, and water visible around every corner.

Since the owners plan to eventually retire to the home, it was designed for aging in place. An elevator connects the ground level and ﬁrst ﬂoor. “Worth every penny,” says the owner, “for the pleasure it gives the grandchildren.” (Brewer notes, more seriously, “For the price of an elevator, to still be able to utilize the entire home later in life, that’s a game-changer.”) The guest suite on the ﬁrst ﬂoor can eventually become the owners’ suite, and each of the home’s showers is curbless. For now, the owners make plenty of use of the second ﬂoor, which includes their bedroom, where the intersection of the home’s gables creates an origami effect in the peaked ceiling, and more large windows look out at the sunrise over the water. The second ﬂoor also includes a second guest suite and an owner’s office, painted a deep persimmon and lined with dark oak built-ins that anchor the space with warmth and gravity.

The home is elegant, but it was designed to accommodate activities that might get messy. The ground ﬂoor features a dog wash just inside the entry, where Millie, the couple’s large dog, can be rinsed off when she gets back from walks at nearby Wolfe’s Neck Center. A craft room holds a big table covered in craft paper and crayons, along with a TV area that one can imagine will be a favorite of teenage grandkids. In the pool house, cubbies and hooks for swim gear line the main hallway, and a woodshop is ﬁlled with equipment for the wife’s woodworking projects (the home is scattered with her wooden toys, which are like pieces of playful sculpture).

In the end, the site’s constraints became the structure upon which a special design could grow, blending home comforts with the outdoors. “We couldn’t love it more,” says one owner. “A lot of houses that are on the water are totally dominated by the water. Here, shoreland zoning meant that we kept the trees, which are lovely. I just think this is beautifully nestled in here. It’s amazing even in the winter, when it’s all white out there and we’re in here with the ﬁre going. You sit in here, and you feel that you’re part of the outdoors.” 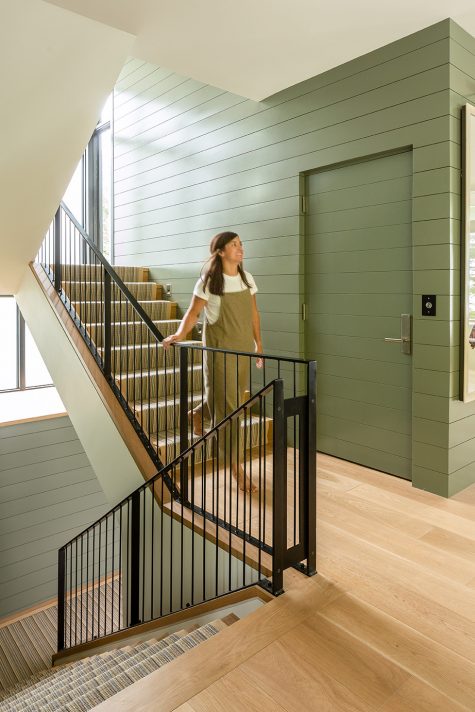 Green shiplap surrounds the elevator door and extends up to the peak of the stairs. 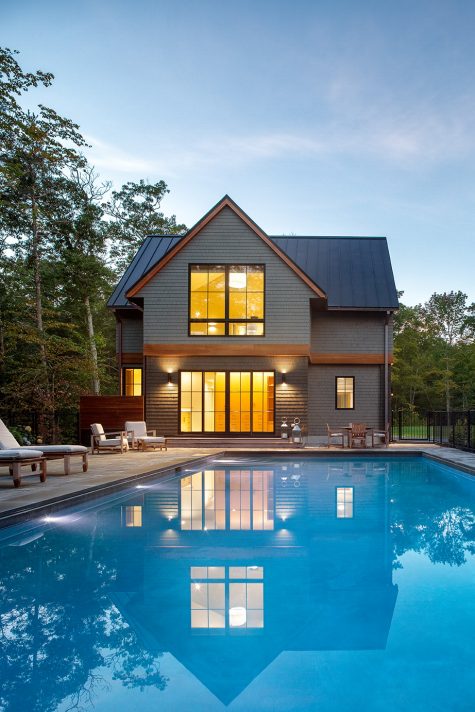 The pool house echoes the main building’s elegant forms and trims but is built to accommodate the active pursuits of the owners and their guests. 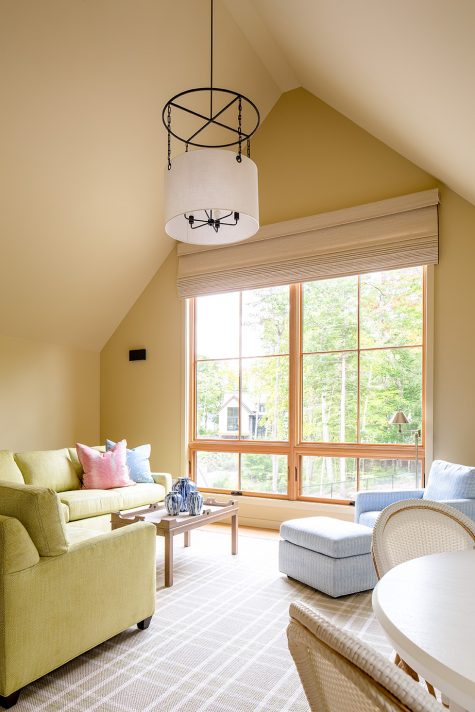 Throughout the home, Jenkins selected rugs with traditional patterns, like this trellis design in the owners’ bedroom, in muted colors that do not distract from the view. 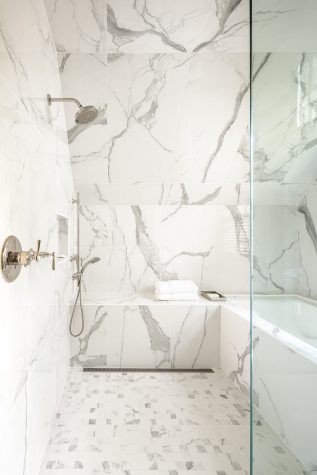 The owners’ bathroom is sheathed in porcelain slabs that mimic the look of marble but require minimal maintenance. 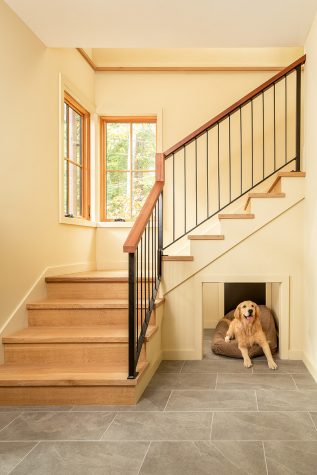 Under the pool house stairs is a special dog entrance, with a small door opening onto an outdoor dog run. 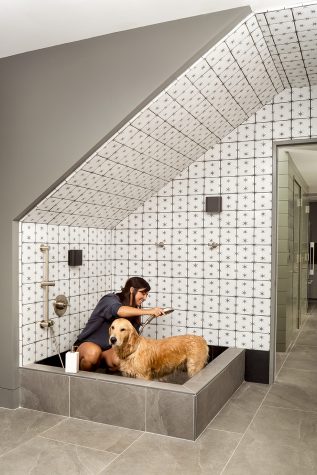 Inside the ground-level entry is a dog wash covered in tiles from Tabarka Studio that coordinate with the porcelain tile used across the lower level. 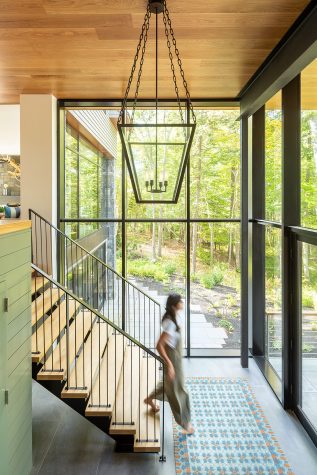 A wooden ceiling extends from the front porch through the foyer and dining area to the back porch, creating a “visual line to take the eye through the house to the view,” says interior designer Jay Jenkins. 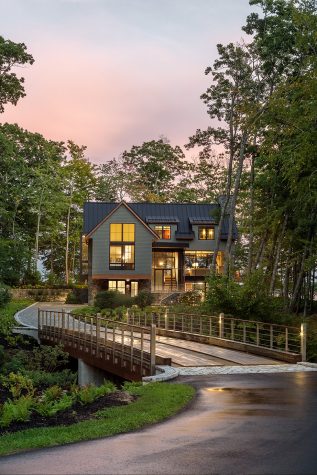