Maine architects and designers got a napkin, a pen, and a drink—here's what they created in 30 minutes 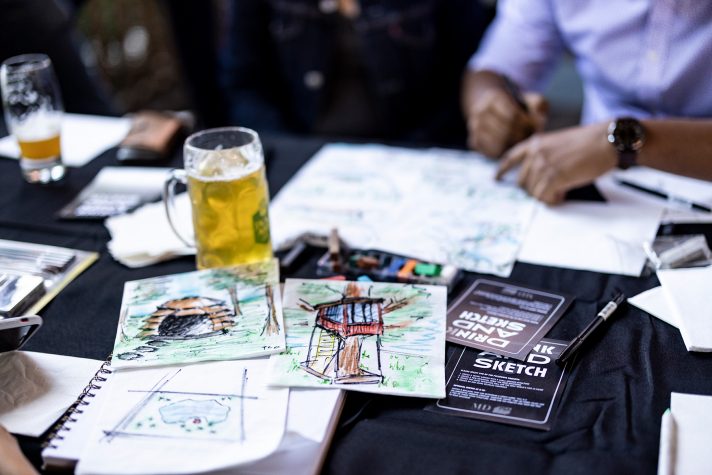 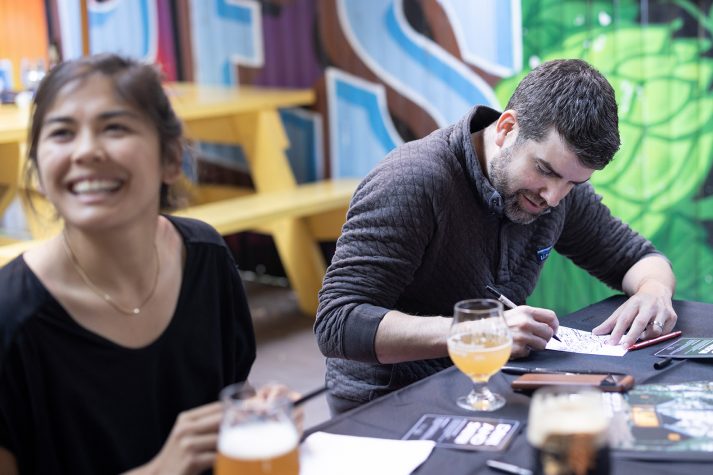 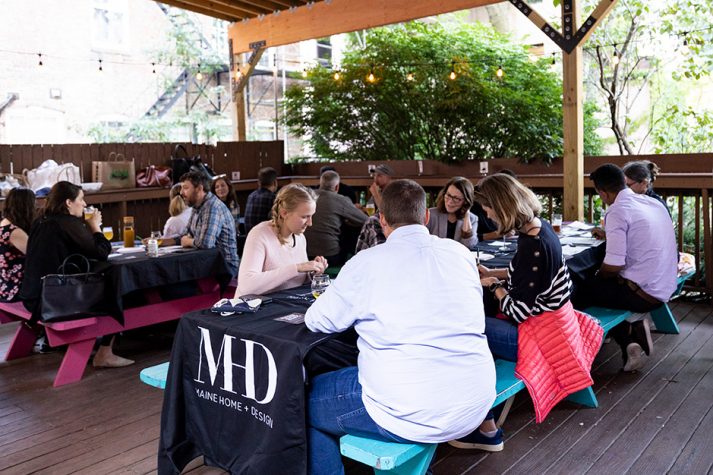 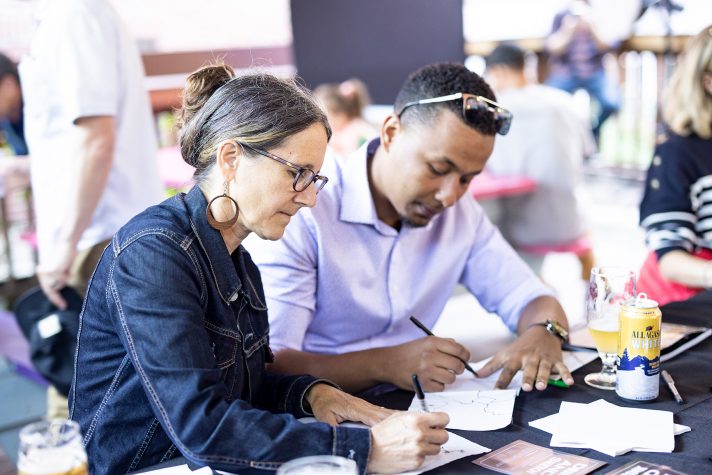 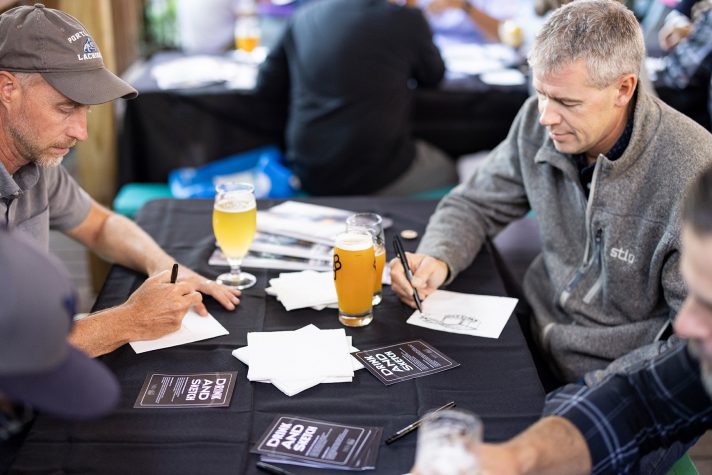 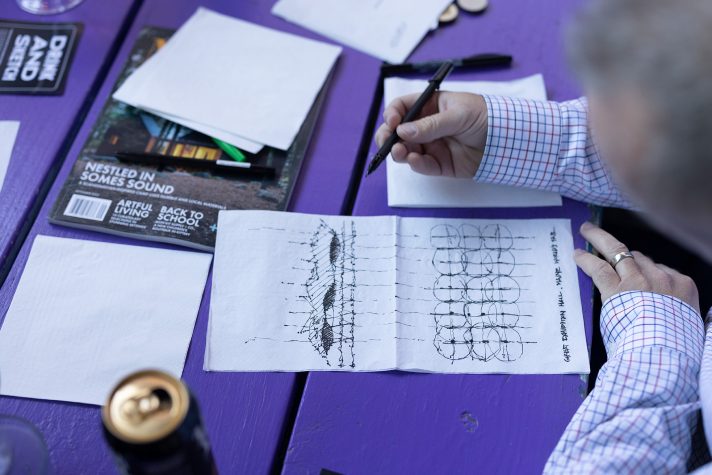 We acknowledge that computers are needed to present data and produce complex construction documents, but the architect’s hand should never become obsolete as a creative tool. Throughout history, some of the most iconic designs have been conceived on a napkin, scrap of paper, or placemat. Architectural sketches are part of the designer’s thought process and the result of their mind, eyes, and hands work-ing together. For a second year, MH+D and the Portland Society for Architecture put out a call to Maine designers to come meet us for a drink at Novare Res Bier Café in downtown Portland to create a napkin sketch of their own. Four prompts were passed out, and each designer could do as many or as few sketches as they liked within the time given. Here are the results.

Napkin sketches have long been an important and easily accessible medium for architects and designers to explore their thoughts and ideas with their hands. They can express primal feelings, a memory, or even a philosophy.

Prompts
Each guest was asked to create a drawing based on one or more of the following prompts: 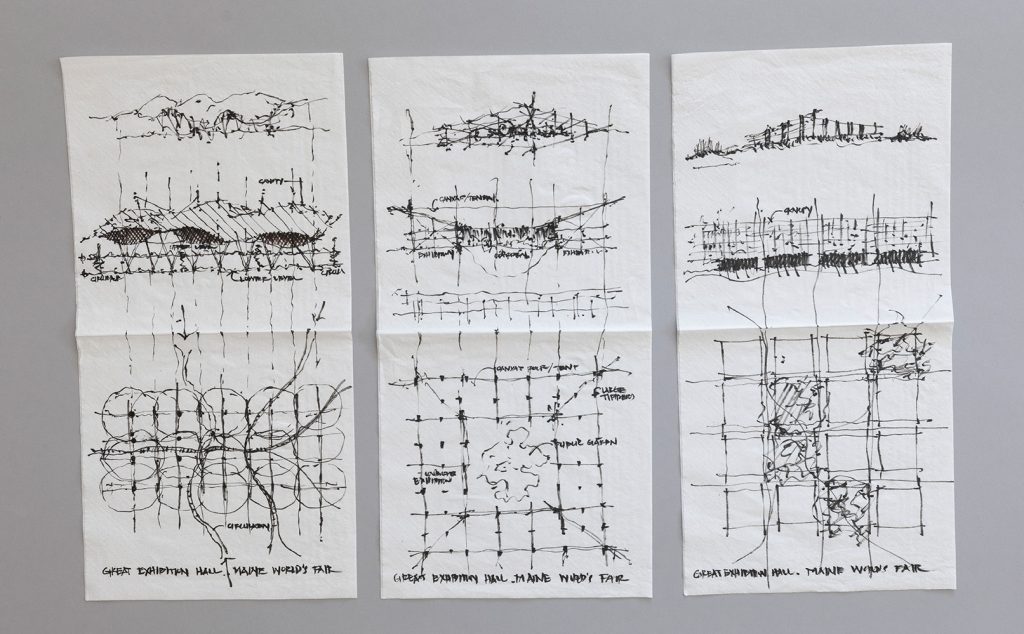 “With the inability to be precise, sketching on a napkin encourages the loose and spontaneous ﬂow from mind to doodle. In thinking of a great exhibition hall for Maine, my mind ﬂoods with images of a grand space that blurs the line between inside and outside. I imagine a large timber structure with an overhead canopy that ﬂoats above the gathering of people and activity below.” 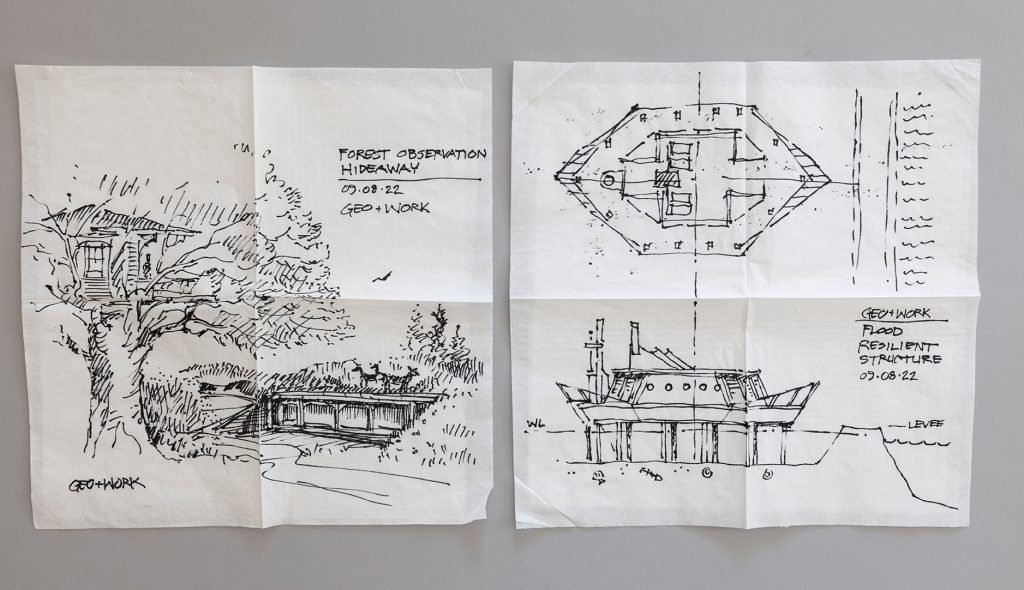 “Having spent several years working on projects in New Orleans in the immediate aftermath of Hurricane Katrina, it occurred to me that housing in a ﬂood-prone area should be designed with speciﬁc resilience. Where the water table might be high, or the elevation of the structure below an adjacent water body (thinly supported by a levee), it should be possible to raise the structure above the ﬂood level as much as reasonably possible, and/or create a structure that, if lifted off its foundational pilings, can be ﬂoated to safe harbor and remain relatively intact. Then, as in the cinematic fantasy of “Waterworld,” survival of the seafaring structure includes all inhabitants onboard in
a self-contained capacity, equipped with solar sails and other off-the-grid power sources.”

“The word ‘place’ holds a great deal of meaning for me, and it becomes exceptionally special within the context of Maine. We live in such a unique place, and I take great inspiration from nature and the natural landscape. I enjoy envisioning how to create and design architectural features in those spaces.” 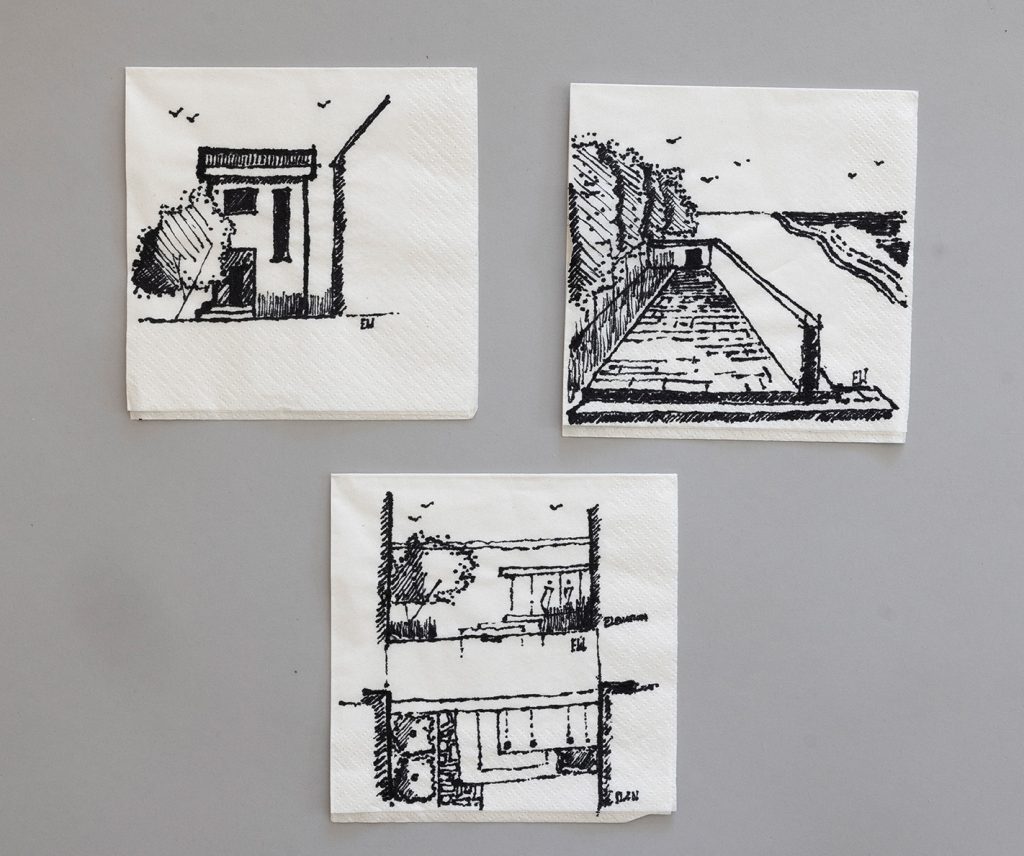 “What is the basic purpose of a napkin? To clean up a mess while you’re eating. The same is true with design. When you’re out enjoying drinks with friends or clients and you start brainstorming ideas, you want to get something down quickly. So, you grab your favorite pen and reach for the most convenient canvas around: a bar napkin. You use the napkin to ‘clean up’ the idea in your head. ‘Can I ﬁt an ADU in my backyard?’ ‘Will a secret garden work in an empty lot behind two buildings, or should it be near a beach?’ ‘Are these blurry lines bricks or birds?’ ‘What about this, does this work? I don’t know…but let’s get it down on paper so we can all see it, discuss it, and ﬁgure out who has the next round.’” 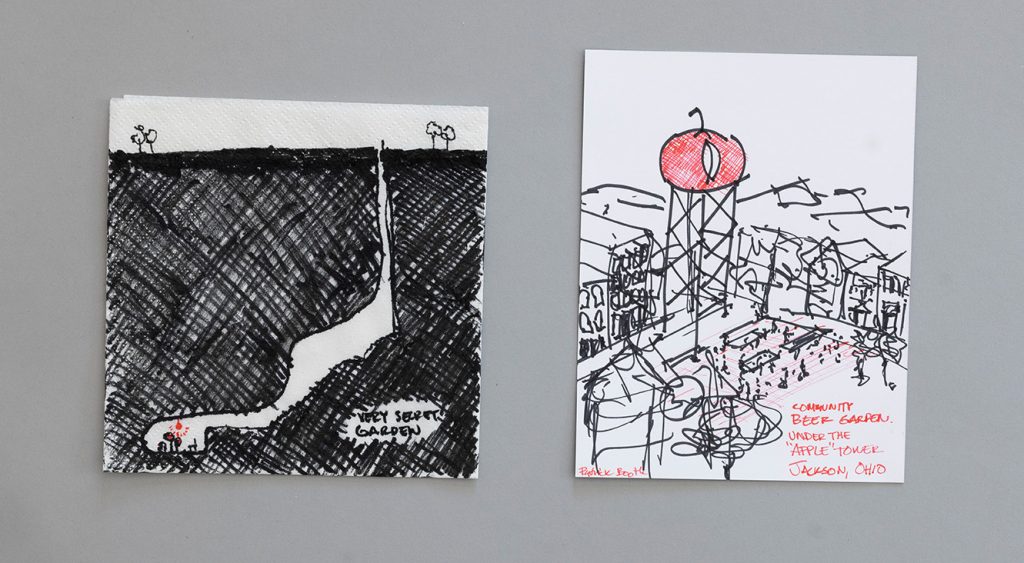 “I grew up in the small town of Jackson, in southern Ohio. Now in Maine, I often hear the comment, ‘Oh yeah, I’ve been to Ohio…drove right through it.’ Ohio knows this, and so all the small towns need a ‘hook.’ Ours was apples: delicious, versatile, American, apples. We had the annual Apple Festival, apple orchards, and so on but the pièce de résistance was a glorious water tower, painted to look like…you guessed it. How perfect, then, would it be to also enjoy a bubbly hard (or soft) apple cider under the shadow of this iconic symbol of small-town marketing?” 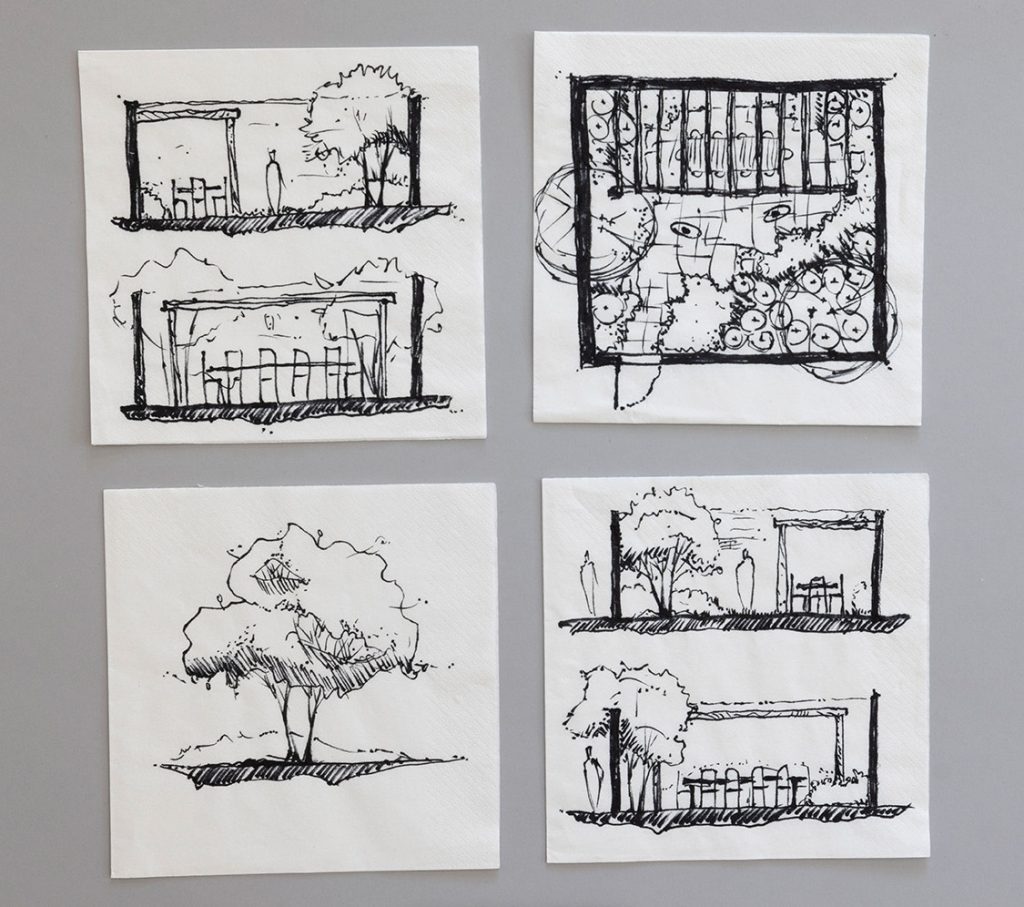 “One of the most exciting (and challenging) parts of the work our ﬁrm does involves designing landscapes that respond to a site’s context. We rarely get to start completely from scratch, so when I read this prompt my imagination jumped at the opportunity to imagine a verdant and secluded urban space. I picture this as a cozy courtyard enclosed with antique brick walls, a stone dining terrace, and a pergola, brimming with lush Maine native plants—the perfect secret garden.” 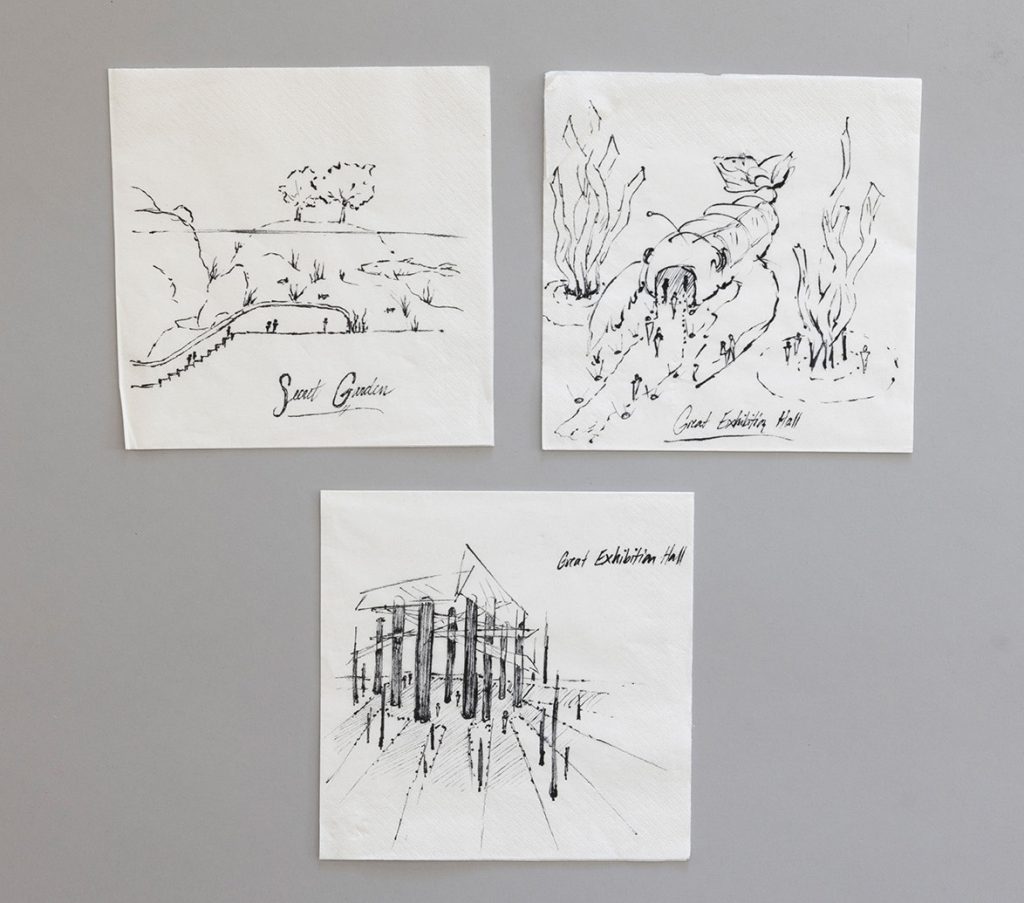 “If the world’s fair was to come to Maine, my thought was that the exhibition hall should evoke the feeling of one of the best aspects of Maine life: walking through a forest of tall trees late in the day, with sunlight streaming through the canopy. This concept sketch includes tall, tree-like forms connected by prismatic shards of glass with natural pathways leading viewers farther into the space. The transparent ‘canopy’ would provide shelter, while also keeping open sight lines and enticing the viewer to look up and appreciate the scale of the structure.” 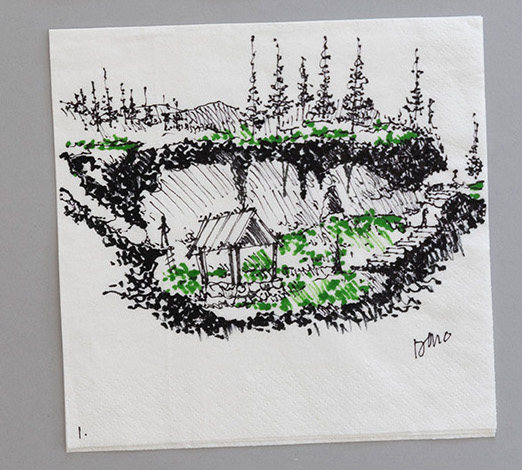 “Gardens are most commonly thought of existing in the realm of the sun. But life can be just as beautiful and dazzling in the damp of a log or within the crevasses that exist only in the shadows. This garden supposes a bountiful underground world teeming with life and color.” 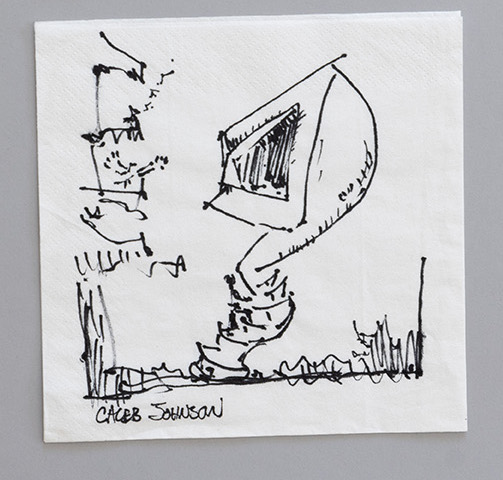 “I drank some beer and sketched an idea that keeps rolling around in my head: a building with one room that has a singular window speciﬁcally for looking at treetops and clouds. Now that I say it, it seems the idea may be related to watching the wind, which may be loosely related to the passage of time, but it’s just a sketch.” 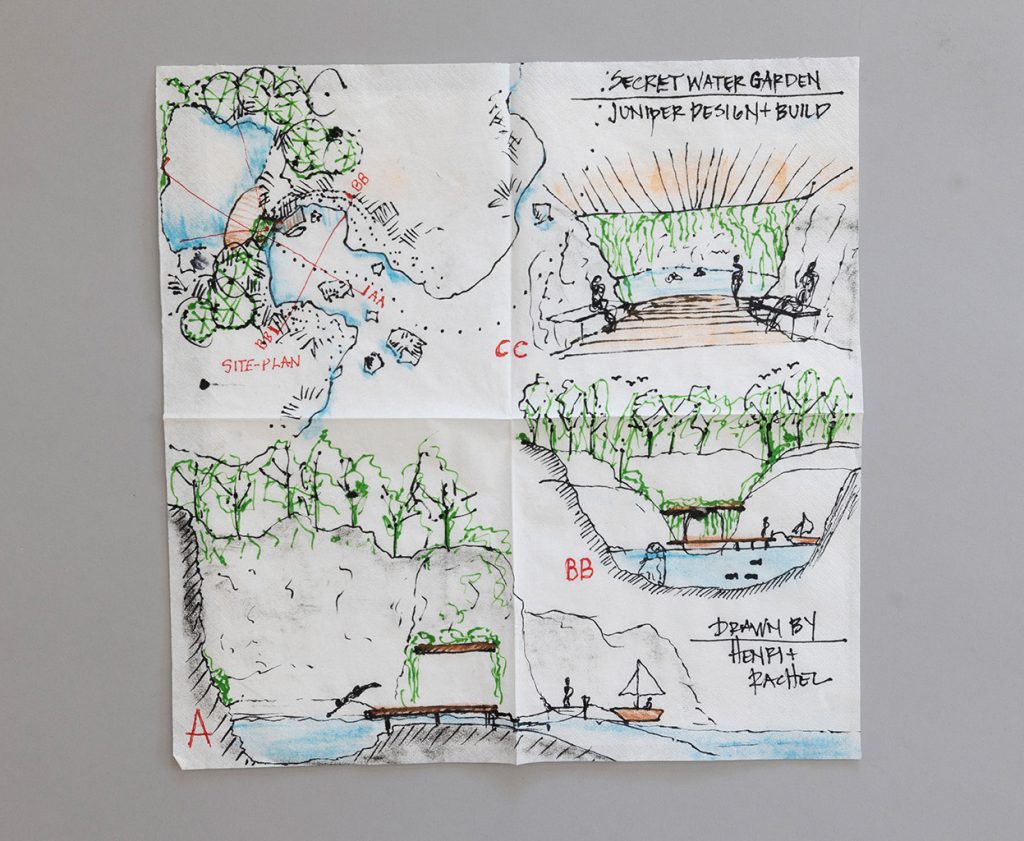 “Juniper Design and Build is located on Peaks Island. Our ‘Secret Water Garden’ takes inspiration from our island surroundings to dream up a hidden garden accessible only by water. We created a small structure, concealed by a curtain of vegetation, to serve as a gateway to this magical inlet. It is made using two simple wooden platforms which bridge the narrow throat of imagined cliffs, providing shelter for reﬂection and play. The water garden is a place to view and experience plant and animal life both above and below the water’s surface.” 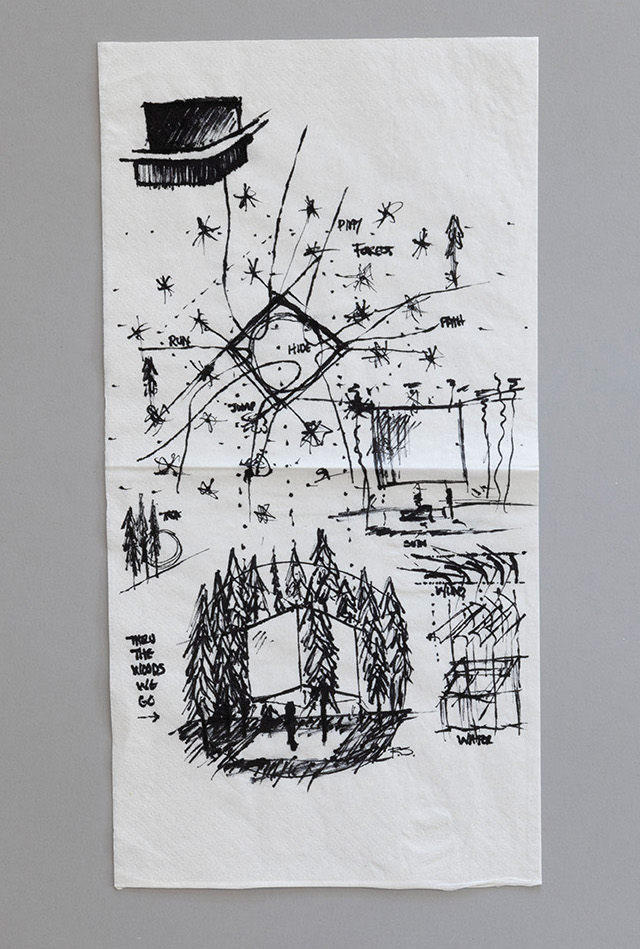 “Through the woods we go! A suspended lantern for wanderers to ﬁnd. I started to sketch and diagram a space where I could wander the woods on an adventure with my daughter. Meandering through the forest towards this suspended lantern hidden in the tree line. Playing with movement, transparency, and nature versus sculpture.” 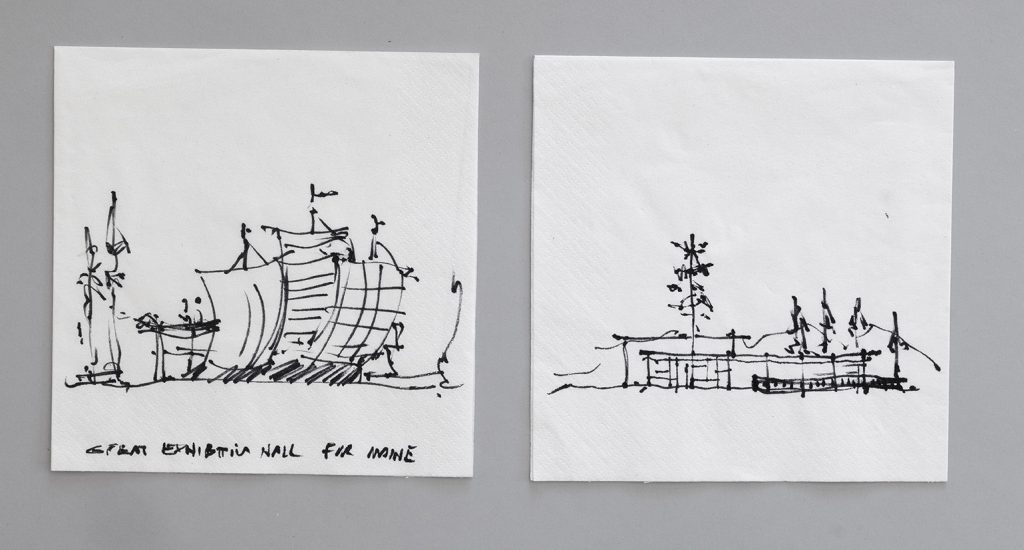 “I grew up in Lewiston, admiring the brick architecture of the textile mills my immigrant grandparents worked in. For the future, instead of brick, Maine’s architecture should be aspirational, aloft, and connected to the natural environment. An exhibition hall with billowing space!” 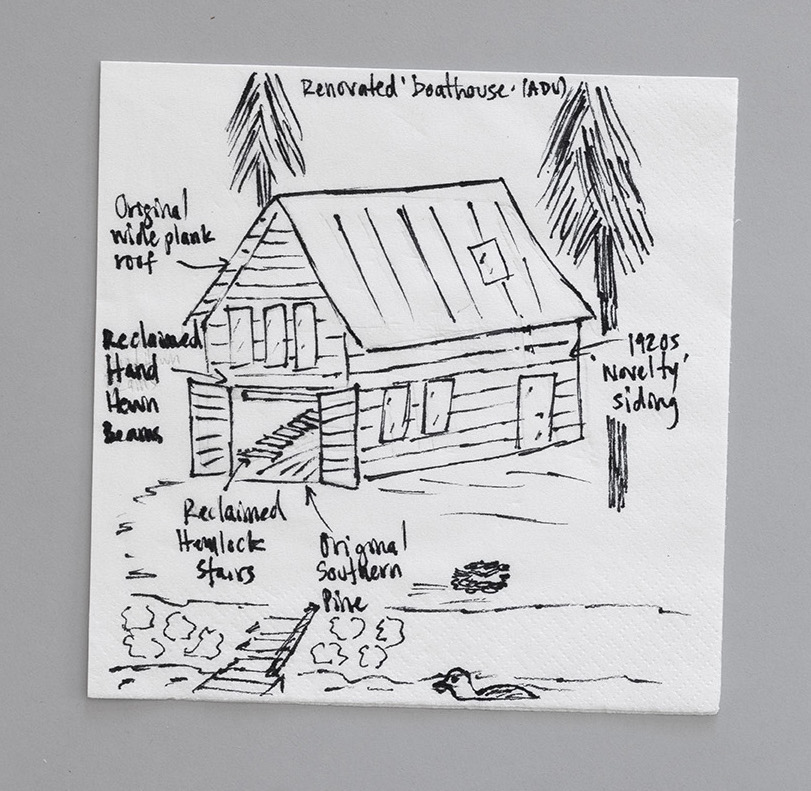 “This is my vision for a small dwelling on my family’s lakeside property. Now that I can work from anywhere, there’s nowhere I’d rather be than at my family’s camp in central Maine. The idea is to take our old boathouse and make it a modern little home while honoring what it was, by sourcing as many materials from the original structure or nearby dismantled structures as possible. I love that the original old siding—which I hope to keep—is called ‘novelty’ siding. It was novel in the 1920s!” 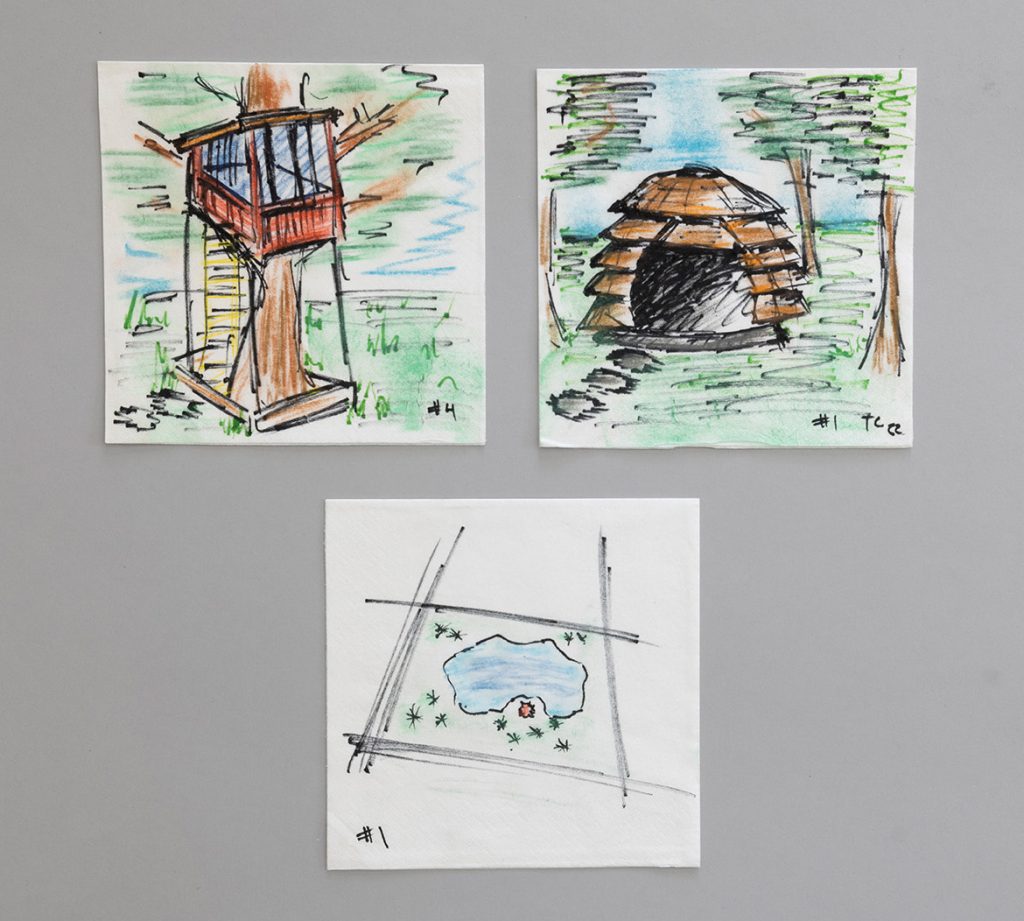 “Earlier in the evening, the song ‘If I Had a Million Dollars’ by the Barenaked Ladies was on the radio. I guess it was stuck in my head, because all I could think of was building a tree-fort, as the song would suggest.” 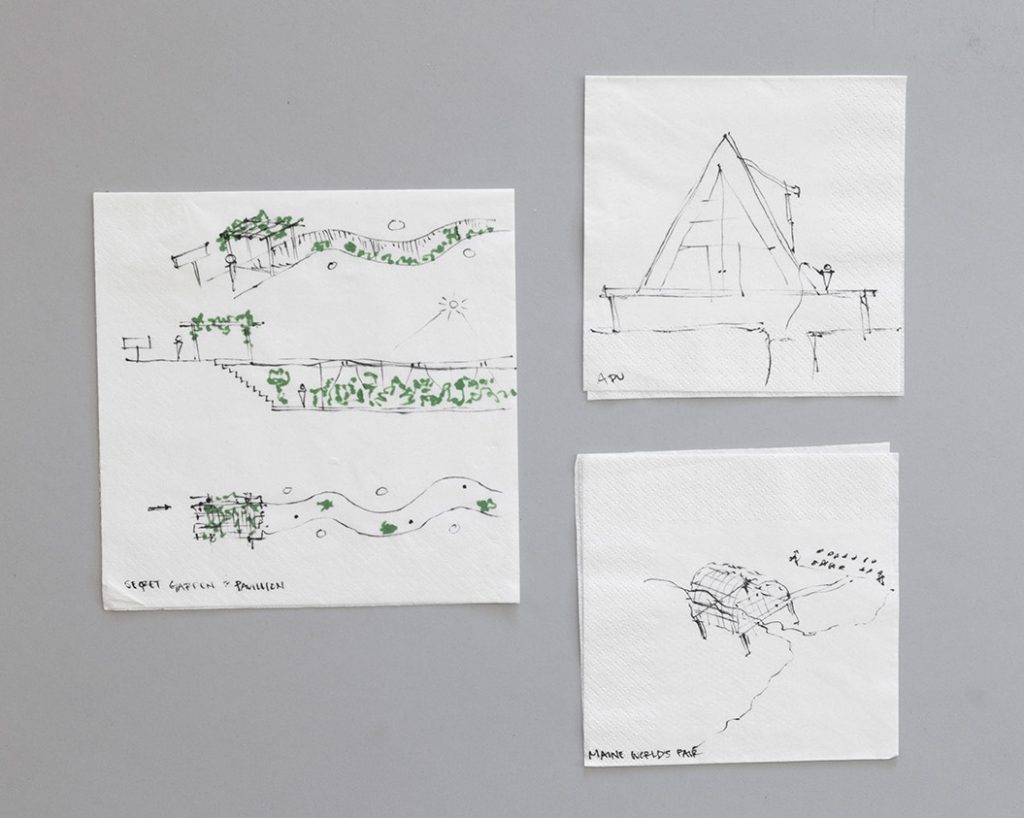 “The ﬁrst idea that came to mind for prompt 1 was a ‘hidden in plain sight’ garden, so the whole garden is subterranean with light wells and a channel that winds through the site and is open to the sky, but standing from a distance it is undetectable. The idea is that you could construct a secret garden almost anywhere, as the plants themselves would be protected from wind, frost, and storms, and could be more like a greenhouse in nature. The entry and signage is the only above-grade area, with a small terrace that protects the steps leading you down into the underground oasis.”

“Besides the free beer and good company, my response to the ADU prompt was inspired by several unrelated ideas. A friend of mine is constructing an impressive camp using high-grade, Japanese shipping pallets for the structure. For no good reason, I have a lingering vision of people long ago laboriously soldering lids onto sardine cans. I suppose we should call it a ﬁsh shed. Shiny cans provoked images of ﬁsh scales, fashioned to form the building skin. A recycled material made with primitive, proven technologies…It was good beer.” 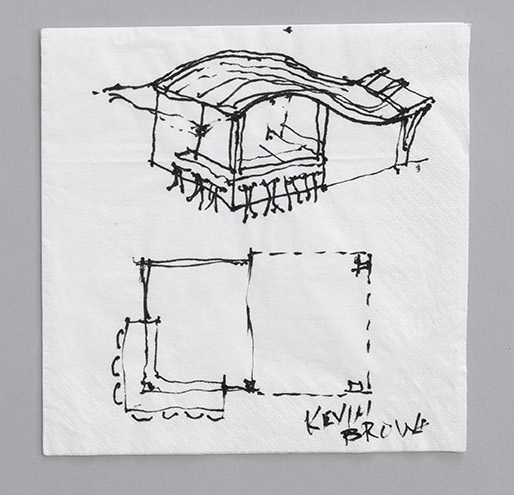 “Growing up, I spent an incredible amount of time riding my bike and hanging out with friends in Dimmick Park in Hellertown, Pennsylvania. Years ago, I helped put together a design for a concert pavilion within the park. This sketch represents a replacement for an existing pavilion that is right next to the concert pavilion, that better relates to the concert pavilion structure. It is a concession stand/bar to support the summer concerts.”