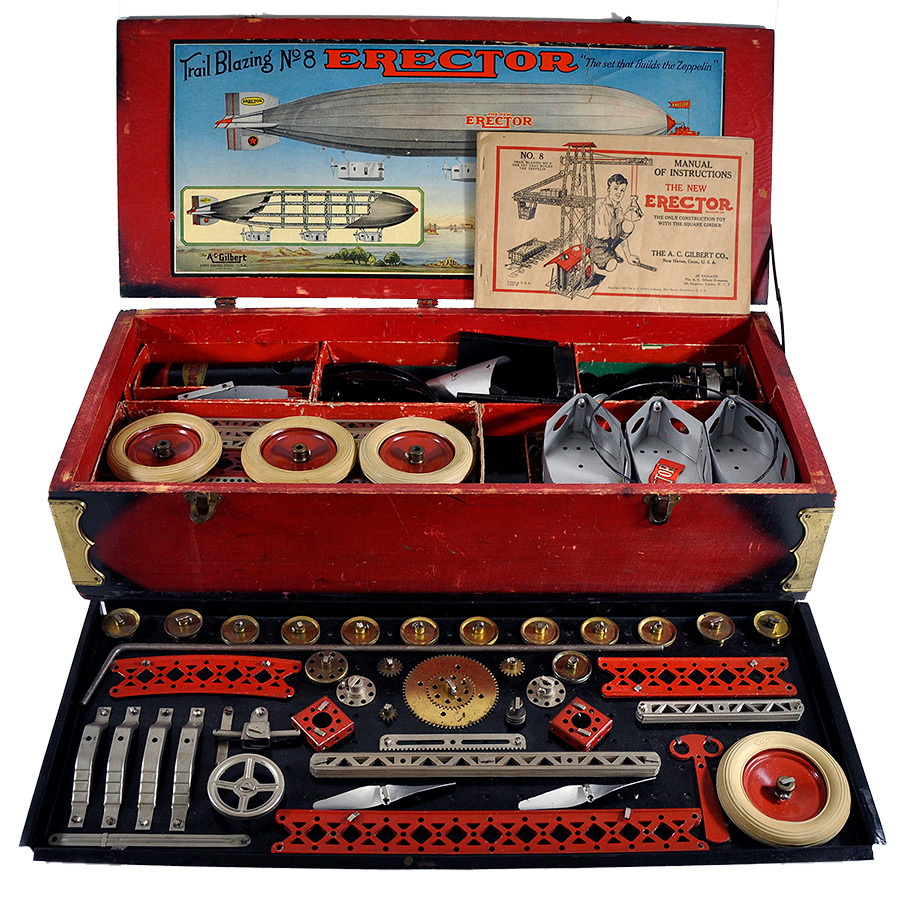 It is known as the toy that saved Christmas. Magician and recent Yale graduate Alfred Carlton Gilbert was commuting to New York to sell his magic kits when he became mesmerized by the network of steel girders erected to electrify the New York, New Haven, and Hartford Railroad’s access to the new Grand Central Terminal. It was 1911, and steel and electricity were trans-forming America. Gilbert thought it would be fun for kids to create structures with miniature girders. Gilbert created the Erector Set, a metal construction set that captivated the hearts, hands, and imaginations of American children.

The basic Erector Set included various metal beams with evenly spaced holes that made assembly easy using nuts and bolts. A child could make complex structures by adding ﬂat or curved metal sheet pieces, steel rods, and screw clamps, and could generate mechanical power using rotating parts such as pulleys, gears, wheels, and levers. The toy didn’t come cheap, and some sets sold for up to $5 (a week’s wages for the average person back then), but they also came with the knowledge that they were an invest-ment in their boy’s future. Yes, that’s right, boy, because they were the ones who would be tinkering their way to successful careers. “Hello, Boys! Make Lots of Toys!” the ﬁrst national advertising campaign for the toy proclaimed, with ads appearing in both the Saturday Evening Post and Popular Mechanics in 1913.

In the fall of 1918, America was still at war. The government believed the country needed to devote all its industrial power to the war and wanted to put a stop to “frivolous” things like toy production and gift-giving. Hurrying to Washington to meet with officials, Gilbert was able to convince the government otherwise, noting that his toy served as a great introduction to engineering and the structural principles of modern skyscrapers. It saved Christmas!

But it wasn’t just hyperbole: the toy did indeed impact the world outside of play. In 1949, William Sewell and Dr. William Glenn of the Yale School of Medicine used an Erector Set to build the precursor to the modern artiﬁcial heart. The set was also used to aid with the design of the George Washington Bridge, and a prototype model of the World War II Bailey bridge was built with a No. 10½ erector.

By the early 1950s, Gilbert’s company had sales of $20 million a year. Sadly, this all changed when Gilbert died in 1961; the company started to decline, and by 1967 it ﬁled for bankruptcy. The company was then sold to Gabriel; cheap materials were used for cost-saving measures, lowering the toy’s quality and sales. In the 1980s, the trademark Erector was acquired by Ideal Toys and then Tyco Toys, and by 2000, Meccano bought the Erector brand and uniﬁed its presence on all continents. Today, the company continues to be run by Meccano and markets to all children, regardless of gender.